“Turkey is the only country that can lead the Muslim World,” Turkish President Recep Tayyip Erdogan recently claimed. This simple sentence contains not only the ambitions and contradictions of Turkey’s current Islamist leadership but also the distance it has traveled back to its foundational stance. Erdogan and the Justice and Development Party, AKP, emerged from the bosom of the hardline Islamist leader Necmettin Erbakan and his Muslim Brotherhood inspired movement and political party of the 1970s. 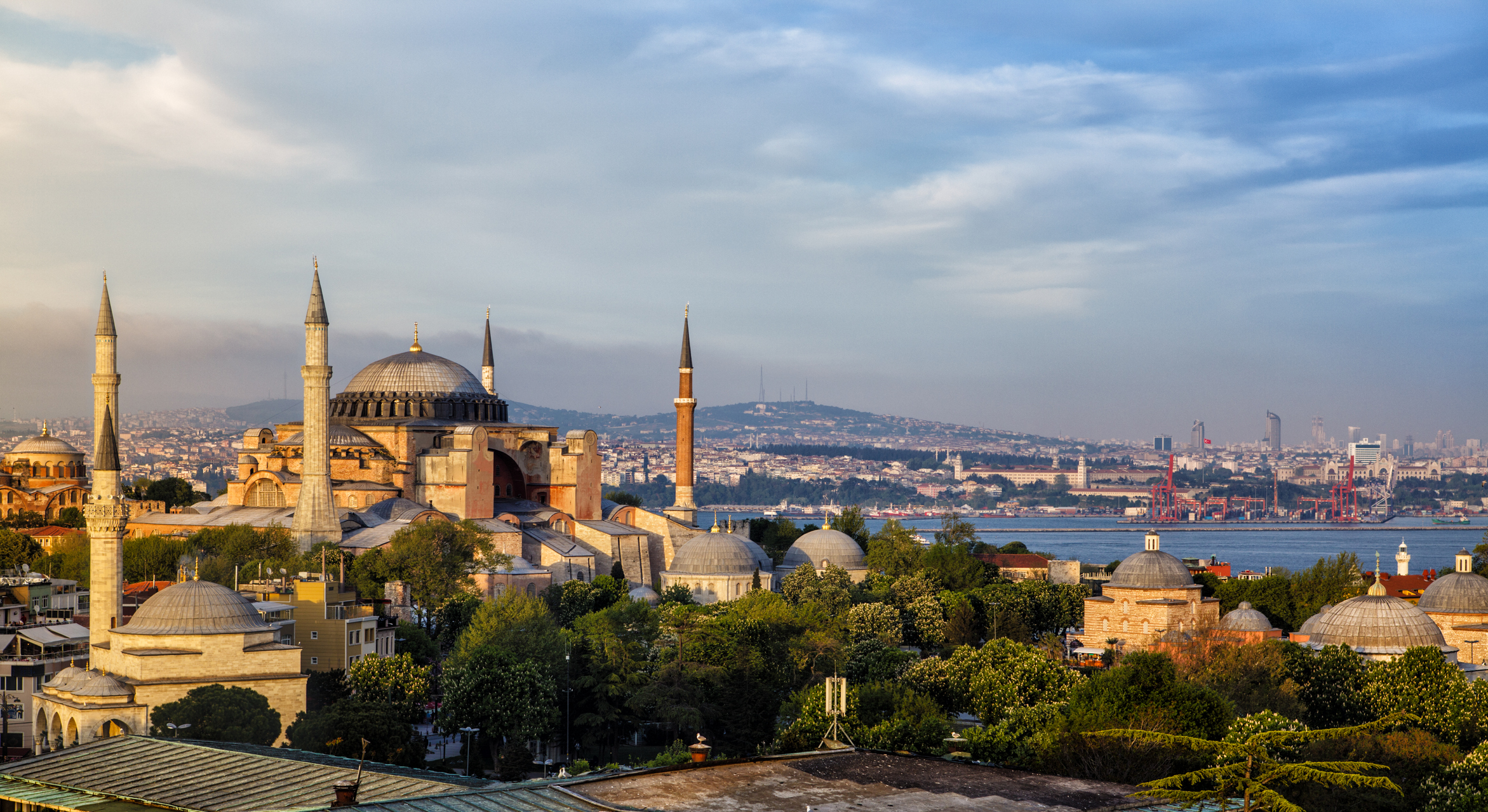 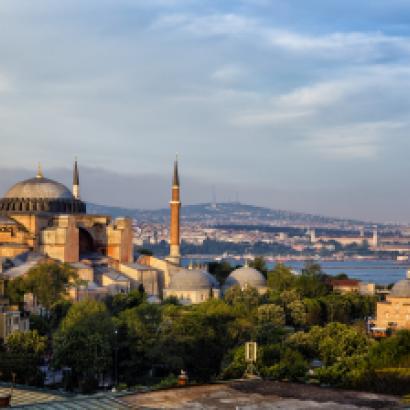 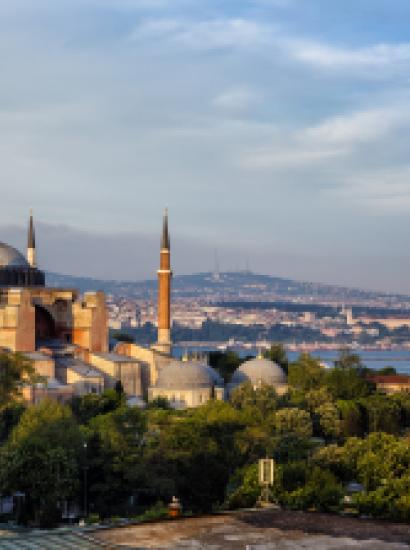 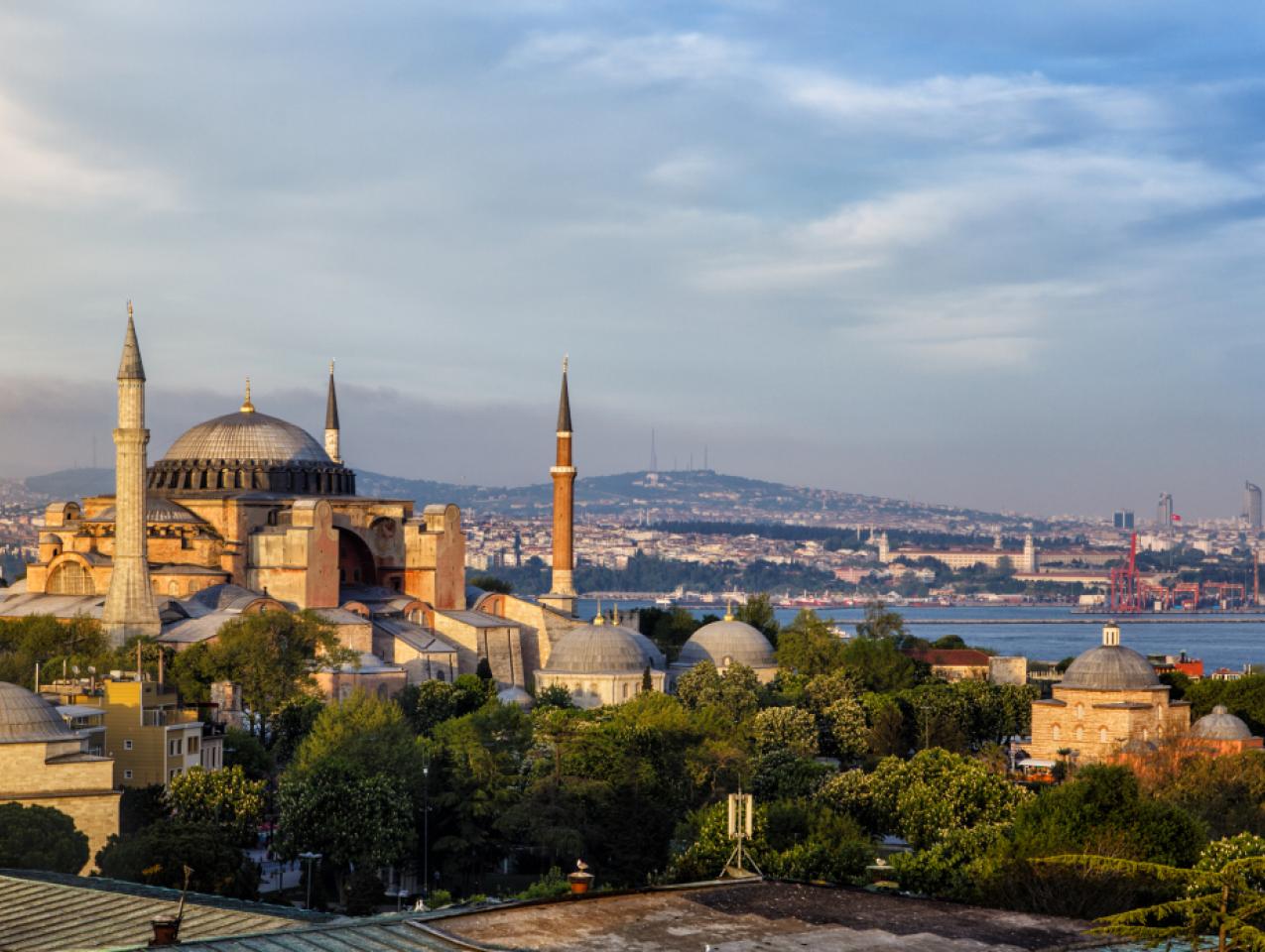 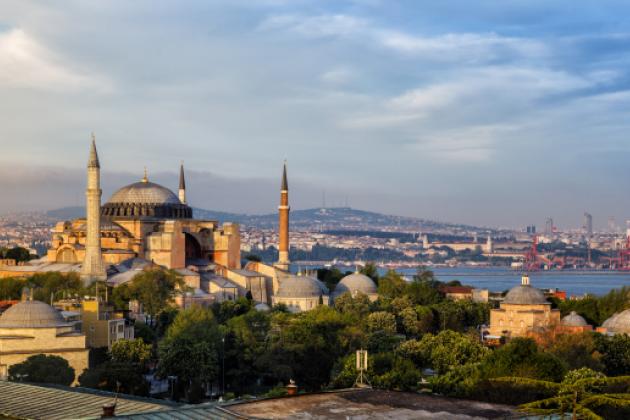 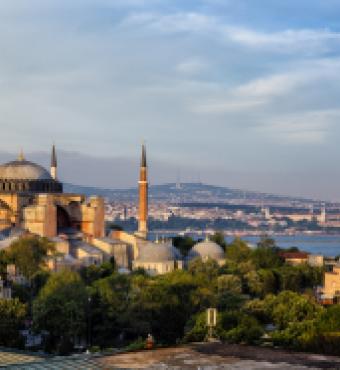 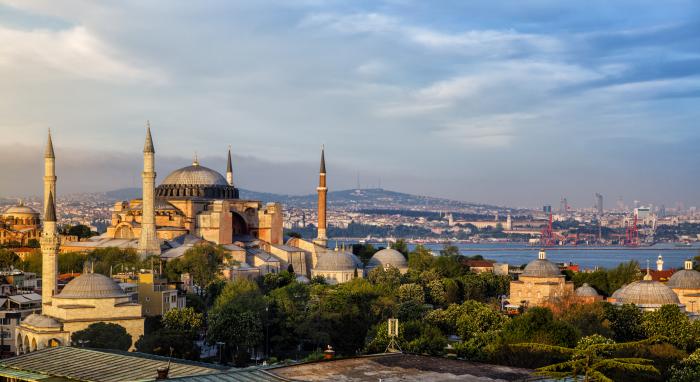 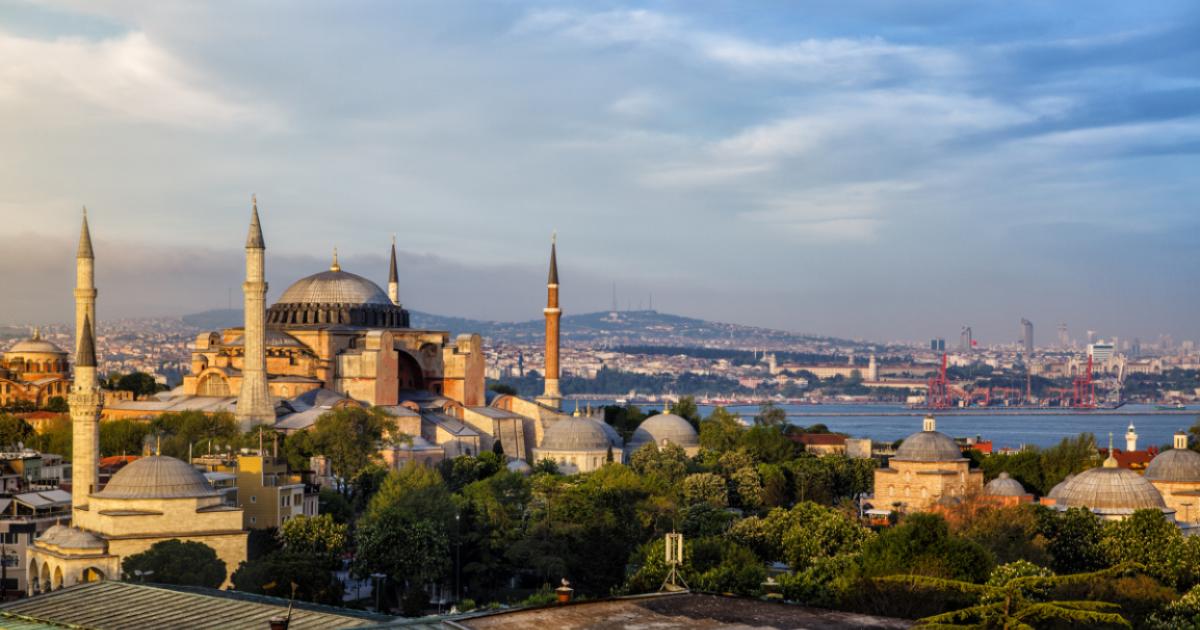 “Turkey is the only country that can lead the Muslim World,” Turkish President Recep Tayyip Erdogan recently claimed. This simple sentence contains not only the ambitions and contradictions of Turkey’s current Islamist leadership but also the distance it has traveled back to its foundational stance. Erdogan and the Justice and Development Party, AKP, emerged from the bosom of the hardline Islamist leader Necmettin Erbakan and his Muslim Brotherhood inspired movement and political party of the 1970s. Erbakan saw the world as a Manichean struggle between Islam and the West; hence his fierce anti-Western rhetoric, efforts at distancing Turkey from Western institutions and desire to make Turkey, in an Ottoman revivalist spirit, a contender for the Islamic world’s leadership.

Erdogan at first embraced these ideas and then opportunistically broke with his mentor Erbakan to create the AKP with a group of close collaborators. In fact, they had rightly concluded that the Turkish military establishment would never allow Erbakan to assume power and by redefining themselves as Muslim Democrats they sought to distance themselves from his legacy and make, what turned out to be a successful bid for power in 2002.

In the 16 years since their victory, however, Turkey has been transformed. Erdogan step-by-step has refashioned institutions, state-society relations and the national ideology to better suit his vision. He has built an autocratic system in which he is the uncontested leader who shapes, defines and dominates the Turkish state and all of its institutions, civilian and military. Not since Turkey’s founder Atatürk has one person succeeded in imposing so thoroughly his preferences on state and society.

Erdogan is a classical populist politician with a grand and ambitious agenda. His goal is to unite his strong Turkish nationalist predilections with a global Islamist agenda that will ultimately benefit both in what he perceives to be a zero-sum struggle with the rest of the world, though mainly the West. Herein also lies the challenge as Turkish nationalism and an Islamic vision do not necessarily align well at home or abroad. Turkish society, while more outwardly pious than ever before, has not assumed an Islamic character. Turkey’s overt push for the leadership of the Islamic world will necessarily face fierce opposition from other countries, especially Saudi Arabia and Egypt.

While he has reembraced many of Erbakan’s positions, Erdogan’s populism is imbued with a pragmatic streak. The AKP’s Muslim Democrats, while embracing a conservative political outlook, constructed a political strategy designed at first to get Turkey closer to the European Union (EU) by adopting democratic values, political openness and economic reforms. The results were impressive as Turkey experienced a political spring of sorts. Europe responded, despite long-term misgivings, to elevate Turkey to the hitherto unachievable status of candidate country. This push towards democratization had, however, as much to do with the EU as it did with containing and checking the power of the entrenched Turkish secular-military state apparatus. Erdogan and his companions knew only too well that having won power with only 34 percent of the vote and a military establishment dead set against them that their political life depended on winning outside support, specifically Western backing. This pragmatism is what distinguishes him from his mentor Erbakan.

Erdogan and the new AKP leadership were correct in their analysis; the military’s last hurrah came in 2007 when it first tried to block the ascension of Erdogan confidant and Foreign Minister Abdullah Gül to the presidency on account of Gül’s wife wearing a head scarf. Erdogan called the military’s bluff by scheduling national elections that culminated in a sharp rebuke to the officer class, as the AKP’s vote vaulted to 46 percent. An effort to get the party banned by the Constitutional Court—just as so many of Erbakan’s parties had been dispatched—also failed, thereby effectively ending the specter of military tutelage over Turkish politics.

With the military out of the way, Erdogan slowly went about consolidating his power at home. A series of constitutional referenda first revamped the judiciary in 2010 and later executive power creating the current presidential system. By 2018, all powers in Turkey were concentrated in his office.  A failed July 2016 coup attempt allowed him to decapitate what was left of the military as some 200 generals and admirals as well as countless lower ranking officers were cashiered out or imprisoned. Erdogan also went after Fethullah Gülen, the exiled Islamic cleric with whom he had established an alliance against the military, and his putative followers in the state bureaucracy on grounds that they had instigated the coup. Taking advantage of the revulsion over the coup attempt, scores of newspapers, publications, civil society organizations, universities, schools and business organizations of all stripes, liberal, leftist, pro-Kurdish as well as Gülenist, were closed down and taken over by the Turkish state and tens of thousands were remanded to the court system for harsh punishment.

As he consolidated power Erdogan rid himself of his original collaborators, such as Gül, thereby surrounding himself only with people whose only loyalty is to him and him alone. Critical to his new edifice was the creation of a business elite that was dependent on him and state contracts that would take over critical aspects of civil society, most importantly the press. Paradoxically, as the process of consolidation got underway in 2010, Erdogan’s rhetoric changed. He became far more confrontational, populist, anti-Western and more mindful of a larger religious agenda. Whereas he had been insistent on Turkey’s secular character earlier on, he increasingly ignored it. There has been a dramatic increase in the number of Imam Hatip schools that offer religious education along with a diminished secular curriculum. Erdogan famously defended the practice of expanding these schools by arguing a conservative democratic identity should not be expected to raise an atheist generation of students.  In line with these developments, Darwinism was removed from high school education curricula. Another way to chip away at the separation between religion and state was to empower the Diyanet, the directorate of religious affairs; the Diyanet has become far more visible, more intrusive in daily lives and has ultimately emerged with the Imam Hatip schools as another tool of Erdogan’s foreign policy. The Diyanet has gone on a mosque construction effort abroad and not just where Turks live, but in places such as Cuba (they were beaten to it by the Saudis). The Diyanet has been rebuilding mosques in Syria where Turkish troops forcibly dislodged Syrian Kurds. At a time when almost all state bodies saw a cut in their 2019 budgets, the Diyanet received a 34 percent increase.

There were indications during the Arab Spring of a growing Islamicization of Turkish foreign policy and of a quest for regional leadership. Ahmet Davutoglu, then Turkey’s foreign minister, cast the Arab Spring as an attempt by Arabs to emulate Turkey’s success in not just electing the AKP, but also its efforts to return to its Muslim roots. In so doing, Turkey according to Davutoglu, was attempting to establish a new regional order focused on the Middle East, Africa and Asia designed to undo all the ills of Western domination.

Erdogan and the AKP’s struggle is not just a civilizational one that pits them against the Western world, but it is also one against Atatürk, his memory and his secular ideology. It is the gradual and not-so-subtle effort to dilute the early republican period under a larger sweep of history that anchors modern Turkey in an Ottoman and pre-Ottoman Turkish past. To be sure, the draconian measures enacted during the Atatürk era, mindlessly enforced and re-enforced by the secular-military compact that ruled Turkey, has facilitated this reinterpretation.

Although Erdogan’s return to overt Islamism is genuine, he remains a pragmatist. At home, his anti-Western rhetoric, parroted by a supplicant press, is venomous. He blames the U.S. for the failed 2016 coup and for Turkey’s economic travails; he rails at Western institutions and often makes use of anti-Semitic tropes. Yet none of these preclude him from pursuing a relationship with Washington and even with a person like Donald Trump who has been associated with anti-Muslim stances. He knows that in his pursuit for a greater international role for himself and Turkey, including in the Muslim world, membership in NATO and the perception that he can both be an ally of the world’s superpower and skirmish with it when safely possible, is a necessary asset. His is a delicate balancing act. This also applies to his relationship with Europe; after castigating them as Nazi remnants, he dutifully improved relations with both Holland and Germany, as he could not ignore how Turkey’s well-being depends on better relations with Europe.

The fact remains that Erdogan spends an inordinate amount of time publicly articulating ideas about the role and place of religion, including when he caused a furor by suggesting that Islam needed to be updated. From his desire to create a pious generation to his suggestions that the Muslim world needs to unite and defend itself, in both domestic and foreign policy, Erdogan has prioritized the role of religion. The Turkish press has already declared him the leader of the Islamic world, and his foreign minister has even suggested that other Muslim leaders are envious of Erdogan. With such an echo chamber in the background, he is likely to accelerate efforts to impose himself internationally; the natural arena still remains the Islamic world and, therefore, the Islamicization of foreign policy in all its forms will only accelerate.

Henri J. Barkey is the Bernard and Bertha Cohen Professor of International Relations at Lehigh University and Adjunct Senior Fellow for Middle East Studies at the Council on Foreign Relations.