The Rise Of The New Old Left

What fuels the radicals of our bitter, contradictory age? 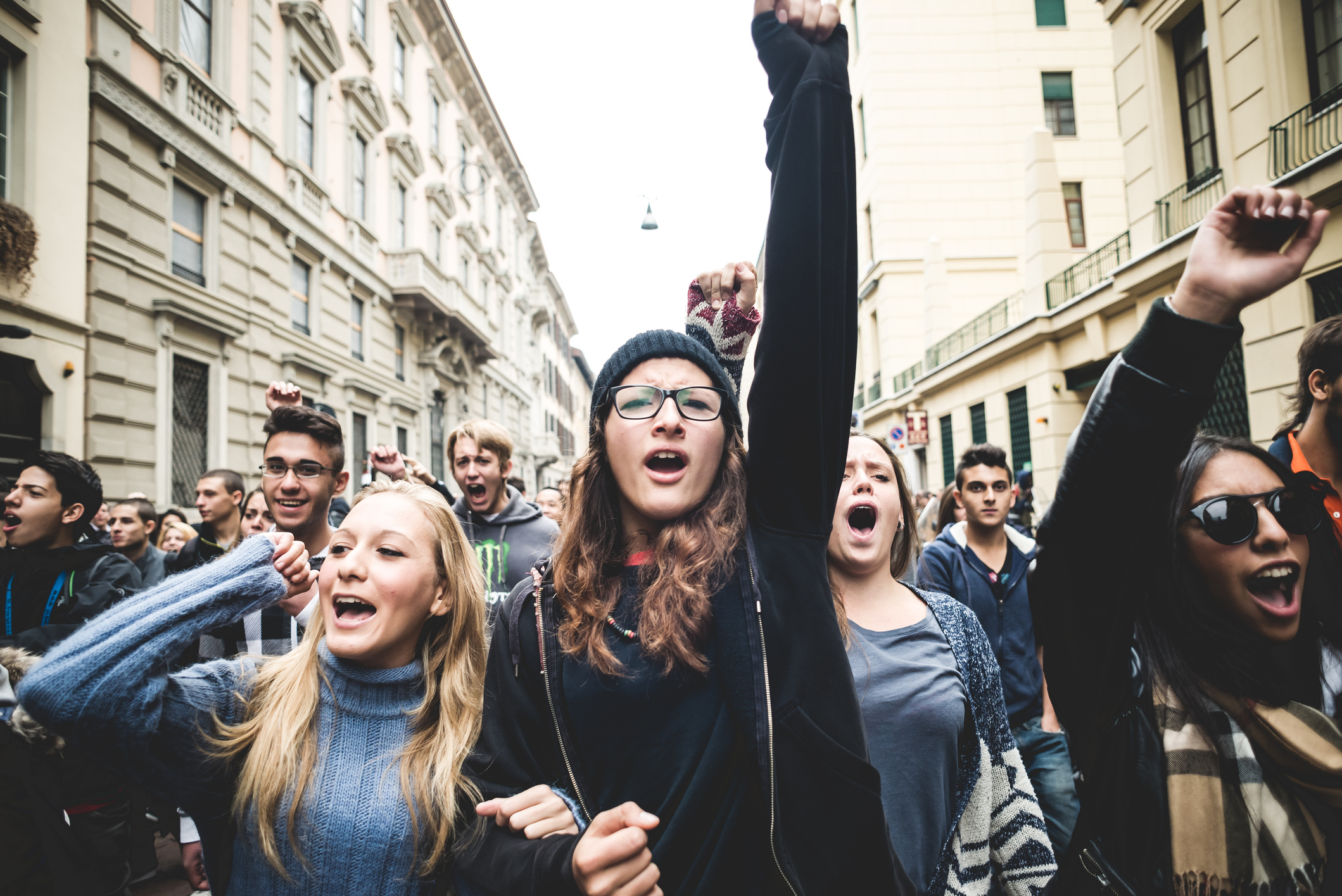 The Rise Of The New Old Left 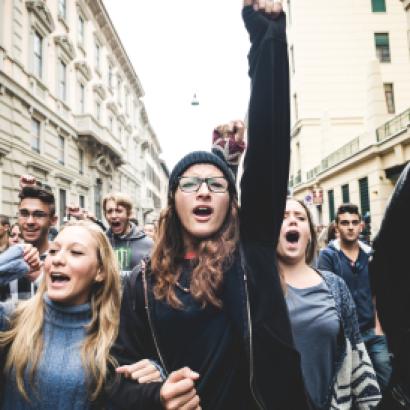 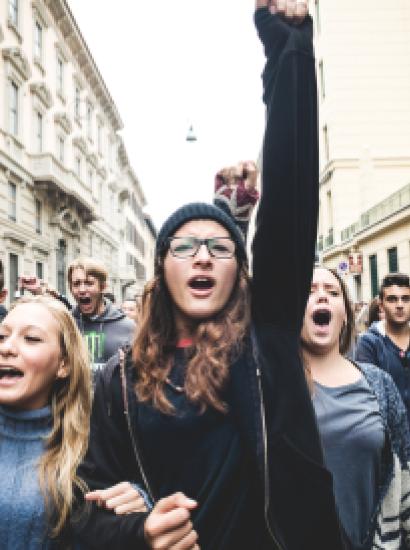 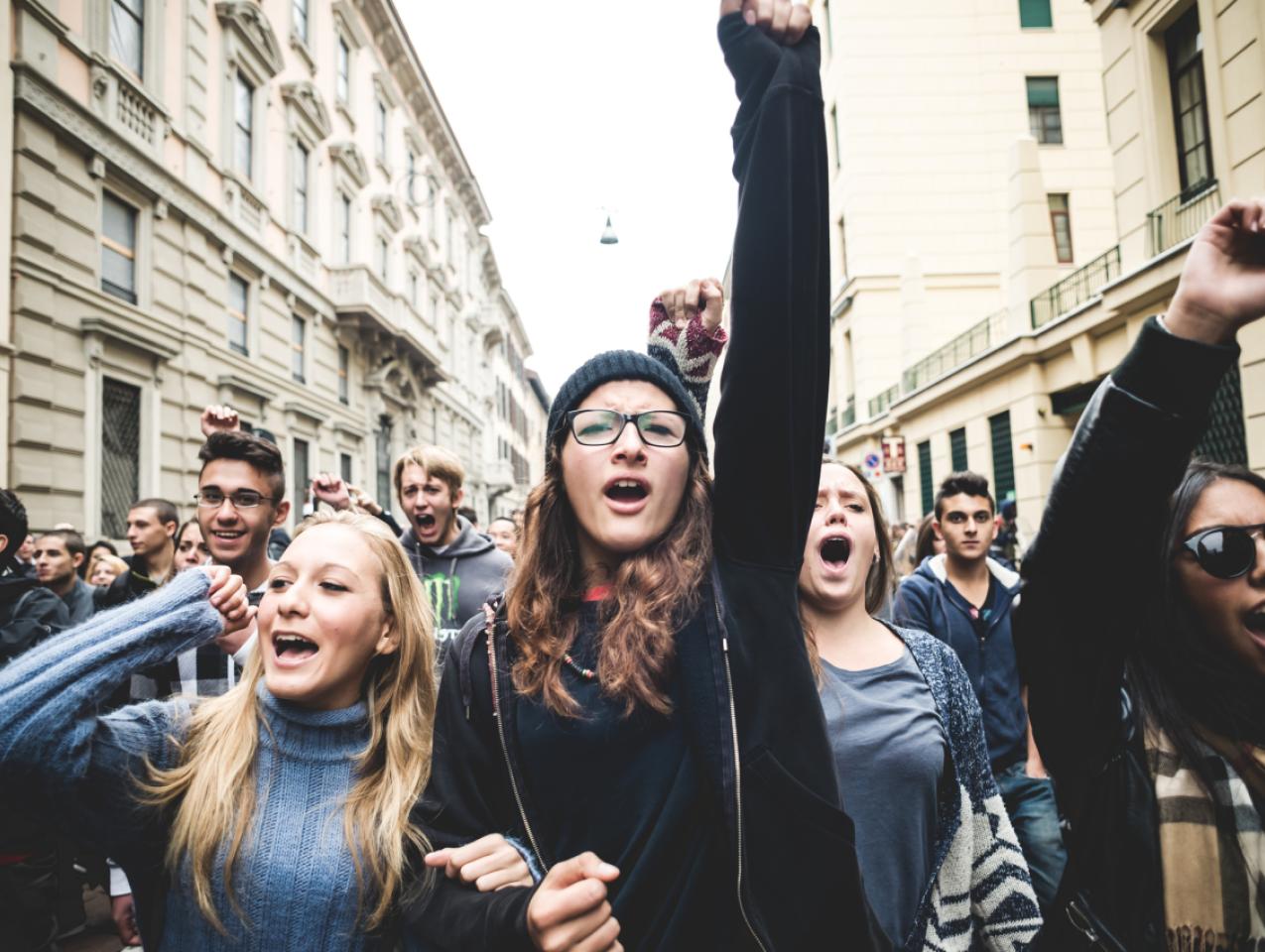 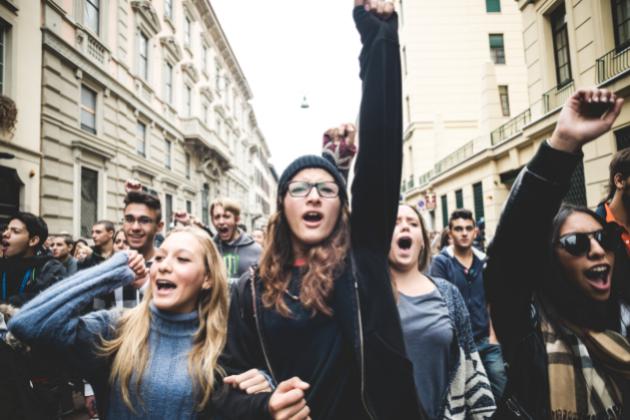 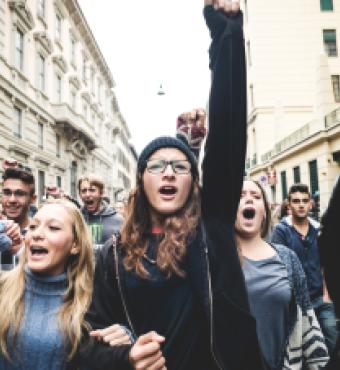 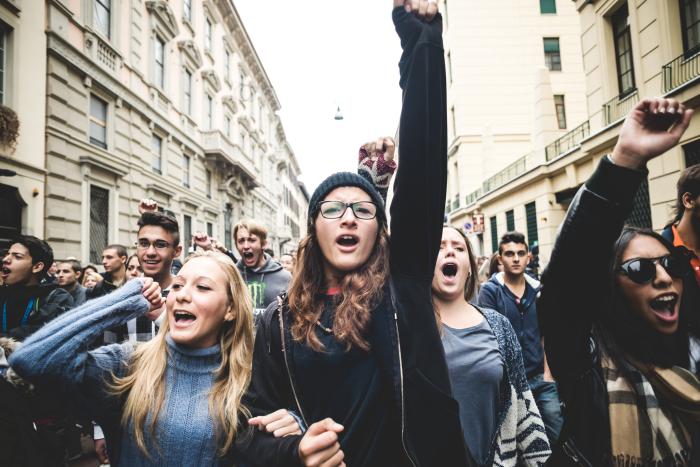 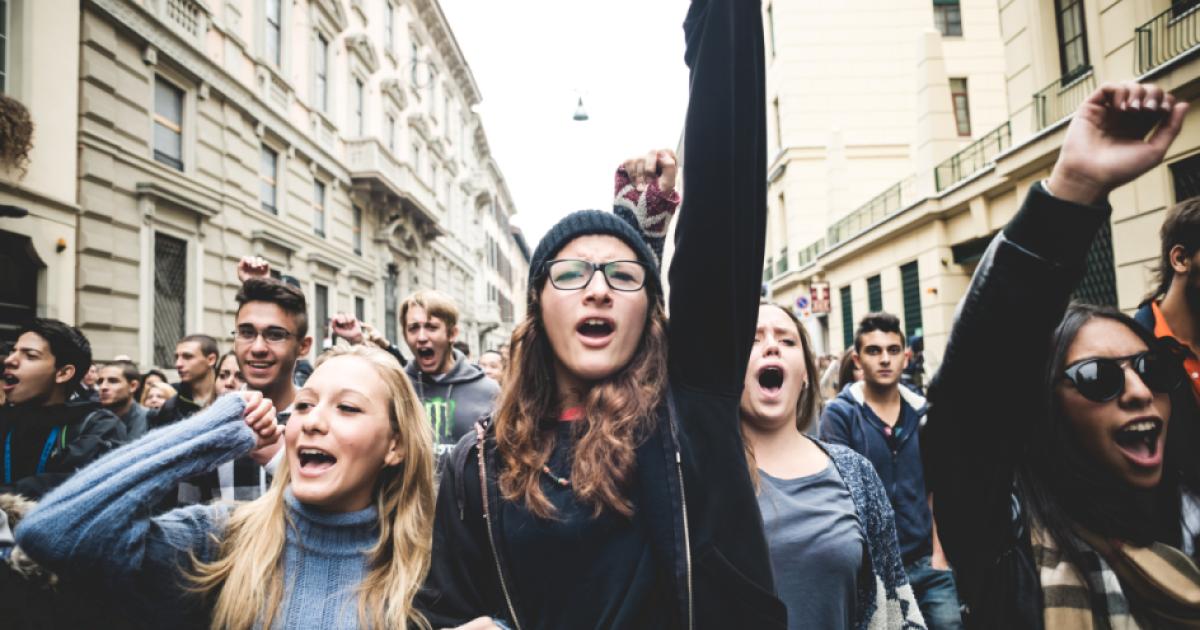 Sixties radicals claimed their enemies were not just the old corporate bosses and greedy bankers, but rather the entire “Establishment”. The new targeted status quo was supposedly a racist, sexist, homophobic, nativist, and white cohort. By 1968, the “Man” was ritually accused of war-mongering, polluting, and exploiting—as well as just being “repressed”, “irrelevant”, “boring”, “square”, “uptight”, and “out-of-it”.

Sixties radicals saw even the Old Left, with its folk-song protest music, loyalty to Moscow, support for world communist revolutions, and never-ending labor strikes, hopelessly puritanical and dreary. For their part, these old, class-struggle Leftists, who came of age in tougher times, were not so interested in New Left trademark agendas and indulgences of a pampered boomer generation like abortion, LSD and marijuana, sustainable living, identity politics, rock music, free speech, and back to nature living.

Instead, Depression-era warriors remained wedded to the doctrines of Karl Marx, and were convinced that “class” transcended all other concerns of race and gender, and that all revolutionary movements had to be tightly controlled, organized, and centralized.  If hippies found the Old Left boring and too straight in their conventional lifestyles, dress and manners, Old Leftists found hippies spoiled, smelly, unserious, addled, and preoccupied.

There were overlaps, of course.

Many Old Leftists, while sexists, had claimed they were feminists (pointing to past heroines in the French and Soviet revolutions). And they often bragged that class-consciousness was liberating to minorities and women.  New Leftists, for all their self-indulgence and hedonism, always argued they were on the side of unions and popular resistance movements.

Yet for the most part, the current New Old Left is quite different from both of these preceding leftist movements. Or rather, perhaps it is a new fusion Left. It seems to combine the hard-left Marxism of the Old Left, with the indulgences and the cultural crassness of the New Left. Think of Occupy Wall Street, Antifa, and Black Lives Matter.

Once that weld is understood, many of the current bizarre leftwing contradictions and paradoxes make a sort of sense.

Doctrinaire global warming ideology combines sixties environmentalism (in contrast, remember that socialist smokestack utopias like Mao’s China, Cuba, East Germany, North Korea, and the Soviet Union were the world’s worst polluters and environmental desecrators), with the authoritarian doctrinarians of the Old Left who hated capitalist production and held that bourgeois consumerism was the root of all evil.

Old Leftists always tried to organize coal miners and indoctrinate them against supposed corporate bloodsuckers. But New Leftists saw coal itself as too dirty and tainted. It was proof of a toxic establishment’s warped environmental values. New Leftists certainly privileged their worries about clean air over the plight of the Appalachian proletariat.

Yet the present New Old Left, all at once, wants both to shut down all coal production, and to organize the unemployed into new green brigades to man subsidized government wind farms, solar panels, and biofuels. New Old Left convert Hillary Clinton spelled out such a scheme in her disastrous 2016 campaign visit to Ohio coal country.

On the one hand, Old Leftists were always looking for any wrong word or action that would prove counter-revolutionary heresy: not using the proper address  “comrade” in the Soviet Union or being “corrupted” by capitalism into buying a stylish new car with fins on credit.

On the other hand, New Leftists on campus in the 1960s began using the F-word, an array of expletives, and sexual and scatological profanities—as part of letting “it all hang out”. Unfettered, stream-of-consciousness talk was supposed to liberate one from repressive establishment norms of speech and etiquette.

Now take a look at social media and you can see the new New Old Left fusion: Internet mobs scan the day’s news to find some “unwoke” enemy of the people favorably quoting the colonialist imperialist Winston Churchill, or failing to deconstruct the counter-revolutionary and oppressive nature of Rudolf the Red-Nosed Reindeer—while lacing their outrage with the F- and S-words, expressed in mostly Sixties doggerel.

Likewise, current identity politics adopts the old Marxist canard that a grasping elite exploits the poor, with the New Left idea that such bloodsuckers are not just rich but largely white, male, Christian, and heterosexual. Abbie Hoffman and Jerry Rubin would now likely be considered unserious white male privileged pranksters, who made their girlfriends vacuum their apartments and wash the dishes—even by those New Old Leftists who now emulate their look, fashion, and behavior.

Campus radicals of the 1960s claimed they were for “free speech” and screamed and broadcast anything they wished. The Old Left, however, favored censored speech and looked for “party lines” from senior commissars and ideologues.

No wonder the New Old Left shares the worst traits of both inheritances: protestors shout profanities and yell in classrooms and lecture halls, but their shouts are boring and predictable. With all the boilerplate directives of “white privilege”, “intersectionality” and “institutional racism,” Antifa protestors sound like hippies as they shout out New Left obscenities, but they also put on black riot gear and masks, and resemble the old well-organized communist street mobs of the 1930s.

Today’s radical feminism is often reduced to an unhappy marriage between 1930s Old Left puritanism of the sort George Orwell chronicled in his novel 1984, wedded to the sexual liberation of the 1960s. The result is the progressive mishmash of the modern campus dorm, where youths “hook up”, wear provocative clothing, and dismiss as Victorian prudery assumptions like abstinence, virginity and traditional marriage.

Yet students also seek to apply Soviet-style binaries of oppressors and oppressed, victimizers and victims, to sexual congress. The result is that no one is quite sure whether consensual unhappy one-night stands in the dorms are expressions of 20th-century sexual hedonism or 21st-century proof of male-dominated predation and premeditated exploitation.

We can see the power of the contemporary New Old Left in the careers of people like the newly elected congresswoman Alexandria Occasio-Cortez. In one sense, she seems like a stern 1930s organizer in calling for Medicare for all, the abolition of ICE, cancellation of student debt, guaranteed incomes, and free college. But in another sense, she does so in vernacular language, as a “woman of color” and an avatar of the new intersectionality of race, class, and gender.

To those of the current and growing New Old Left, sixties cultural warriors like multimillionaire and mansion-living Sen. Diane Feinstein and Rep. Nancy Pelosi appear ossified, and stuck on fuddy-duddy, half-century-old issues. They fail to see that the concerns of 21st-century minorities and women like Ocasio-Cortez are the supposed future of the Democratic Party.

Today’s hip billionaire class is well aware of the rise of the New Old Left. In fact, it is terrified that New Old Leftists are directing their class warfare fury at them, despite techies’ lavish support for progressive and trendy causes. Both the Silicon Valley rich and Wall Street elites have deliberately acted cool. They have dressed in sneakers and T-shirts, and they often talked in Sixties Woodstock lingo of “cool” and “nice”, lacing their speech with the “ya-know” and “like”.

Being hip so far, and giving lavishly to progressive causes, had provided some insurance to the Masters of the Universe against class warfare. Google, Facebook, Apple, and Amazon billionaires may be the wealthiest capitalists and most cutthroat monopolists in world history. Yet their cool high-tech products and their casual lifestyles and progressive worldviews so far had provided them exemption from scrutiny from Old-style Left revolutionaries.

Now not so much. The New Old Left youthful cadres see wealthy high-tech hipness and cool as a façade. They are growing as angry at Silicon Valley corporate octopuses as the Old Left once was with railroads, steel, and mine companies.

What looms on the horizon is a progressive cat fight.  Trump-hating cool multimillionaires in flip-flops and jeans will fight it out with street theater socialists, eager to trust-bust, nationalize, and redistribute—all indistinguishable from one another in look and talk.

In the shadows sits Donald Trump.  For his part, he has created his own New Old Right answer: a populist, workers’ party that directs its culturally conservative ire beyond progressives to include corporations and globalists.

Add it all up, and the primaries and general election of 2020 may prove to be the most confusing, contradictory, and bitter election in memory.