Professor Robert Gildea of Oxford University has been researching the story of France during the Second World War for most of his academic life, and this is his masterpiece. 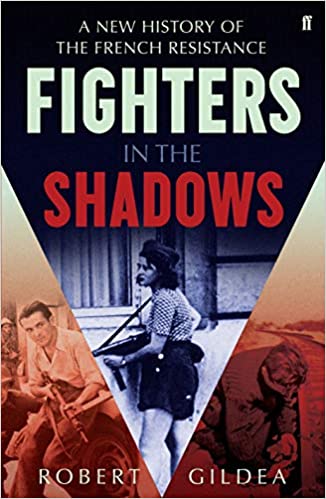 Professor Robert Gildea of Oxford University has been researching the story of France during the Second World War for most of his academic life, and this is his masterpiece. In his book Marianne in Chains (2002), he outraged the French academic elite by pointing out that for much of rural France the German Occupation was made a great deal more palatable for ordinary people because of large-scale collaboration with the Nazis. It understandably struck against a self-image of the French that wartime resistance had been widespread and relatively continuous. (In the 1950s, primary school textbooks in France did not even mention that there had been a Vichy regime, that it had been led by Marshal Pétain, or that it had contributed significantly to the Holocaust.)

While paying due and honorable respect to those immensely brave Frenchmen who did indeed resist the Germans, Fighters in the Shadows also concentrates on the vicious in-fighting between the résistants, and the important (and often overlooked) contributions to the struggle made within France by Spanish Republicans, Italian anti-Fascists, German anti-Nazis, and especially women, who played a vital role in the areas of intelligence, sabotage, propaganda, and covert action. Gildea argues that it is in fact “more accurate to talk less about French Resistance than resistance in France.”

Both the Gaullists and the Communists created Resistance myths to glorify themselves in the postwar era and establish the legitimacy of their aspirations to rule France. Gildea is equally good and pouring doubt on both, but especially the Communists’ claim that it was “the party of 75,000 martyrs” when in fact nothing like that number had been martyred. Similarly, the Gaullists burnished their reputation at the expense of the non-French resisters, let alone their colonial troops who were effectively written out of postwar history. By re-inserting those hitherto at the fringes of the narrative back into the center of it—while never forgetting that it was Omar Bradley’s armored units of the Allied armies that ultimately liberated Paris and not the Resistance anyhow—Gildea has written a classic work of military history.