A Room Alive with Memories

Every painting and object in the Nicolas de Basily Room tells a story. Together their story is a search for lost time. 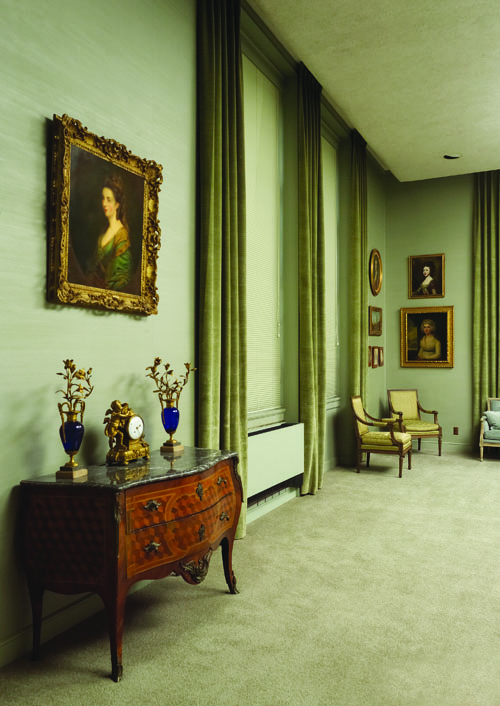 A Room Alive with Memories 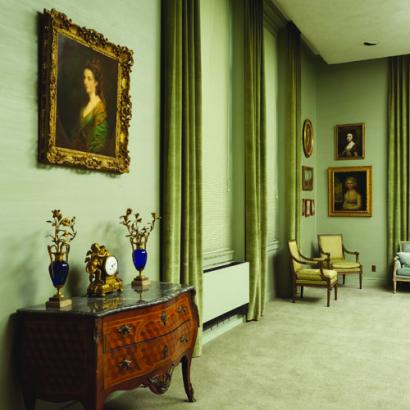 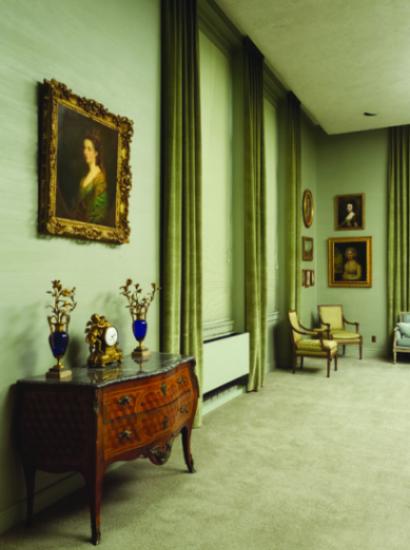 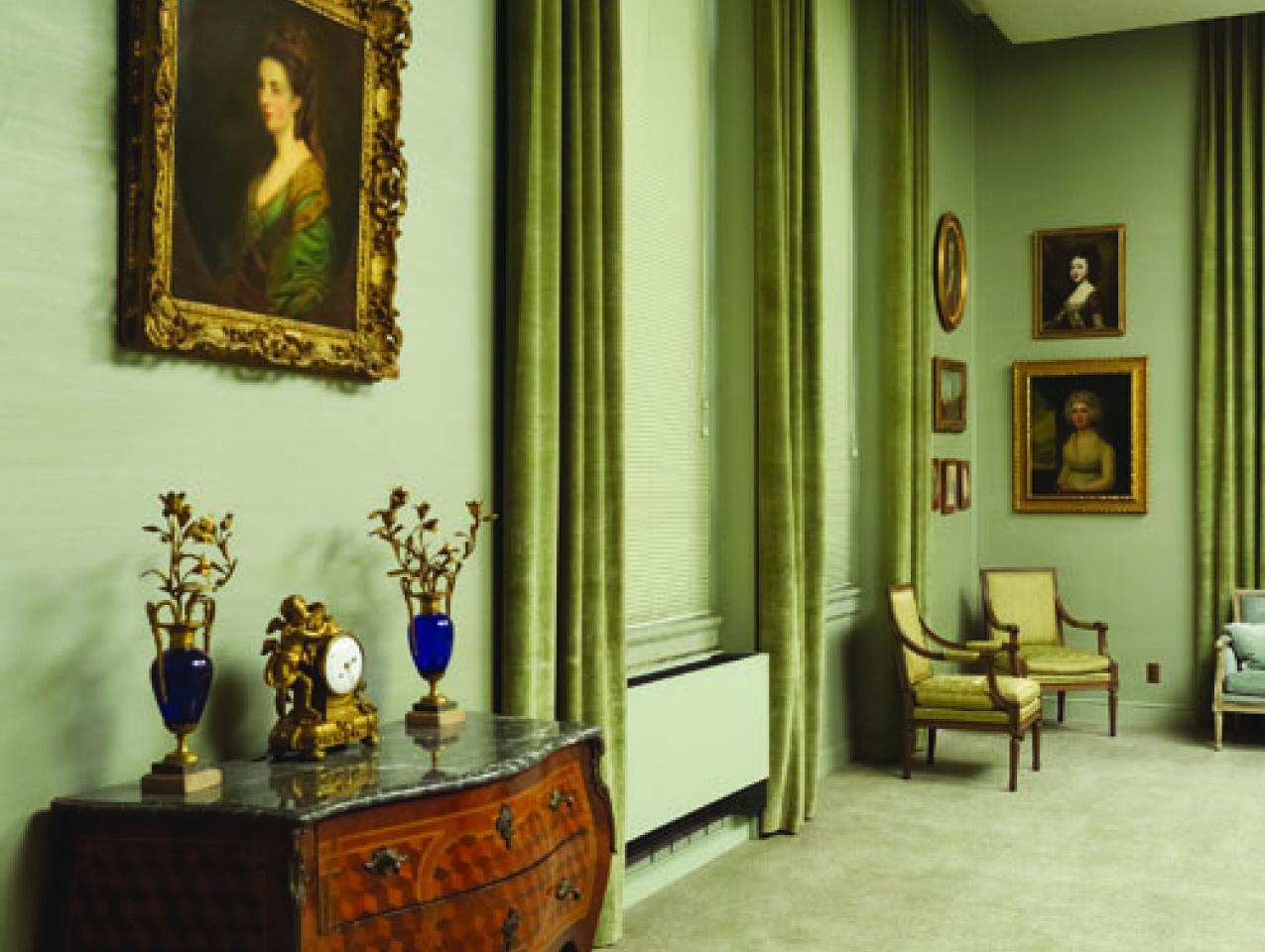 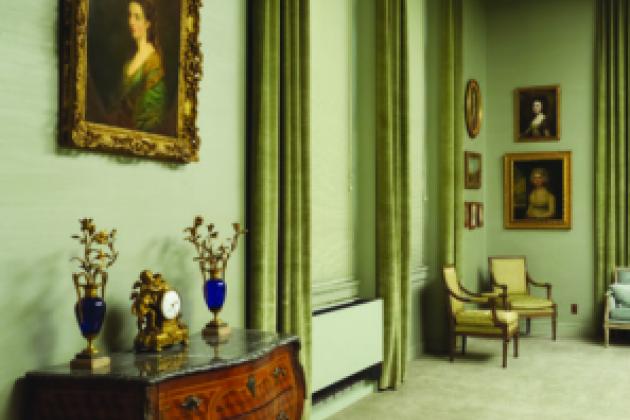 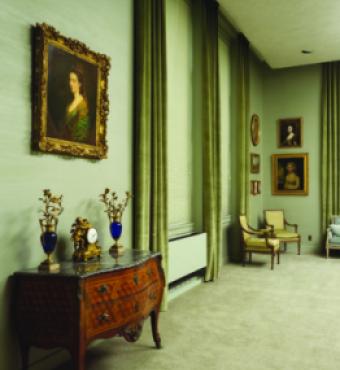 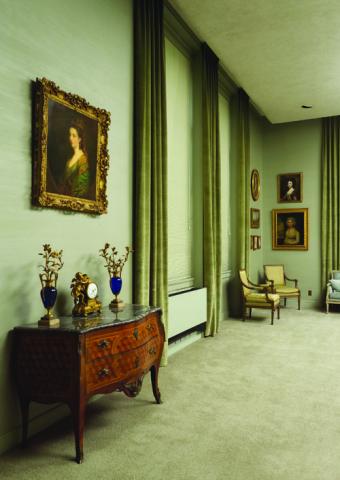 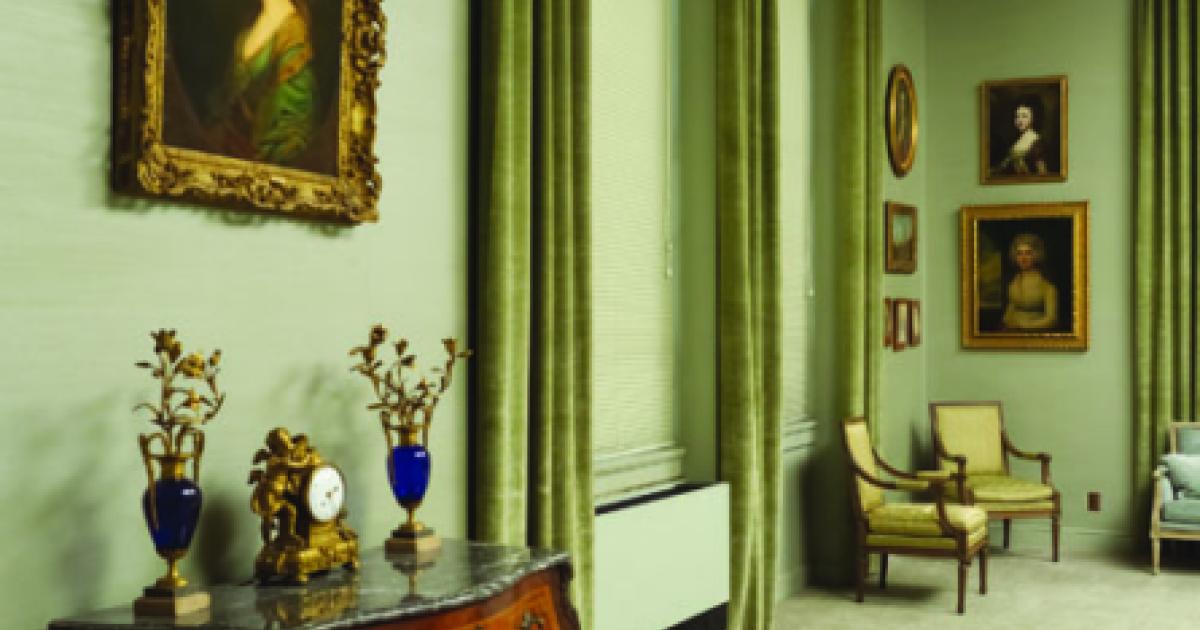 The Nicolas de Basily Room is among the hidden gems of the Hoover Institution and a token of its illustrious history. The artwork, sculptures, furniture, and historical mementos carefully arranged in this secluded, celadon-colored room were described in a booklet published by the Hoover Institution Press in 1972 and written by the donor herself, Madame de Basily. But the room’s distinctive origins merit more than a booklet, as the room has been an integral part of the institution’s activities for more than three decades.

This story begins with a unique gift to the institution by the widow of Nicolas de Basily, Lascelle Meserve de Basily. Her gift, made in 1964 and following the loss of her husband the previous year, consisted of his personal papers and his entire seven-thousand-volume library, which includes many rare first editions in Russian, as well as long out-of-print books on the history of Russian painting.

Two years later, she decided that the couple’s entire collection of paintings and objets d’art belonged with her earlier gift. Today, her husband’s papers and library are part of the institution’s rich holdings on the Russian Revolution and imperial Russia. Those holdings include the records of the Paris branch of the Okhrana (the czarist secret police); the collection of the Menshevik historian Boris Nicolaevsky; historical documents such as the first issue of the Bolshevik Pravda when it resumed publication in 1917; and hundreds of original letters between Leon Trotsky and his son. They also include more than forty thousand release certificates and statements by Polish prisoners freed from Soviet camps in 1941 among the Polish collections of the Hoover Archives (the locations of the camps were made available to Aleksandr Solzhenitsyn while he was writing The Gulag Archipelago).

Solzhenitsyn, in fact, used the de Basily Room as the location, in 1976, for his first press conference in America. Four years earlier, the former Soviet minister of culture, Yekaterina Furtseva, also had visited it. Furtseva, however, had a criticism. She offered the opinion that the room’s famous paintings of the Romanov rulers of the eighteenth century belonged to Russia; Hoover’s then-director, W. Glenn Campbell, acknowledged that indeed they once had, before the communist government began selling off the rich cultural heritage of imperial Russia on capitalist auction markets.

The room that displays highlights of the Basilys’ collection is today an elegant setting for receptions and dinners held by the institution’s director. Its singular nature is defined by its collection of paintings by eighteenth-century Russian masters. They are represented by portraits of four generations of Romanovs—from Empress Elizabeth (who reigned from 1741 to 1762) to Catherine the Great (1762–96) to Emperor Alexander I (1801–25).

Of equal caliber are the objets d’art as well as other paintings by French, Italian, and English masters such as Sir Joshua Reynolds and John Hoppner, Joseph Vernet, Paul Renouard, H. P. Danloux, Johann Nikolaus de Groot, Lampi the Elder, and the Venetians Francesco Guardi and Marco Ricci.

That the Basilys were astute and discerning collectors is hardly a surprise, because their education and backgrounds made connoisseurs of them both.

Nicolas de Basily, born in 1883, was the aristocratic son and grandson of imperial Russian diplomats. His father had served as undersecretary in the imperial ministry of foreign affairs, and Nicolas himself, educated at the famous Lycée Alexander I in St. Petersburg, grew up in Constantinople, Vienna, and Budapest. After a childhood of broad travel and superior schooling, he lost his father to Spanish influenza in Paris at the age of nineteen, but began his own diplomatic career the following year, 1903, when he joined the chancellery of the ministry of foreign affairs, an office that dealt with political questions concerning Europe and America.

Aleksandr Solzhenitsyn used the de Basily Room as the location, in 1976, for his first press conference in America.

Between 1908 and 1911 Basily served as secretary of the Russian embassy in Paris and later as a member of the imperial ministry of foreign affairs. Like his father, he also held the title of chamberlain of the imperial court, and between 1914 and 1917 was a member of the staff of Czar Nicholas II’s diplomatic chancellery, of which he became director in 1916 when the chancellery was located at the imperial army headquarters in Mogilev. His primary responsibility was to coordinate liaison between the Russian general staff, the foreign ministry, and the offices of the czar. It thus came to pass, in March 1917, that Basily drafted the abdication decree for Nicholas II; annotated copies of all five of the drafts are in the Hoover Archives among the de Basily papers.

After the czar’s abdication, Basily returned to France in 1917 as counselor of the Russian embassy in Paris, and later became chargé d’affaires with the title of minister. Despite the continuing civil war in Russia, the embassy remained active and open (France did not recognize the revolutionary Bolshevik government until 1924), a period during which the Hoover Institution was heavily involved in collecting Russian materials.

In the Paris of 1919 Basily, for the second time in his life, met Lascelle Meserve, who was to become his wife later in the year. She had been born in the United States in 1890 and brought up in Paris and elsewhere in Europe, where she became fluent in French, German, Russian, and English.

She was named after her grandmother of English ancestry and became the stepdaughter of H. Fessenden Meserve, the eighth generation of an English family that came to America in 1673, and a graduate of the Harvard class of 1888. Her ancestry and travels with her parents gave her a unique and unusually broad perspective on both the old and the new worlds, one that was attractive to and appreciated by her future husband. She was, in addition, strikingly beautiful, as her wedding photograph on display in the de Basily Room illustrates.

By the time she was first introduced to Nicolas de Basily in 1917 at the opera in St. Petersburg, she had already been educated in Paris, had lived in North Korea (where her father directed a gold-mining company on fifty square miles close to the Manchurian border), and had traveled the Trans-Siberian railway in Russia when her father was vice president of the National City Bank of New York for Europe (later, the First National City Bank), a period when he oversaw the war loans—the bond issues—made by that bank to the Imperial Russian government (1915–17).

Meserve’s work included opening branches of the bank in St. Petersburg and Moscow. The revolution of 1917, however, brought an abrupt end to his work; he closed the branches’ doors and fled by train with his family, eventually taking up residence as vice president of the bank in Paris, where his wife died of illness in 1919.

Nicolas de Basily drafted the abdication decree for Nicholas II, the last czar. Annotated copies of all five of the drafts are in the Hoover Archives.

The Basilys were married in November of that year, whereupon Lascelle Meserve received Russian citizenship (she also retained her American passport); he was thirty-six and she was twenty-nine. They never returned to Russia, they never had children, and they never regained Basily’s lost lands and estates, or his fortune. They had indeed saved their lives, but had escaped with nothing, and so decided to remain in France, where Basily went to work for an American banking house, Marshall Field, Glore, Ward & Co.—work that took the Basilys throughout Europe during the 1920s and 1930s in both a diplomatic and business capacity. Among the witnesses to their marriage in Paris was their close friend and then ambassador, Vasilii Maklakov, appointed by the short-lived Provisional Government of Russia. It was a friendship that was to prove prophetic for the Hoover Institution, which received, a number of years later, the Okhrana records from Maklakov.

In the 1920s, the revolutionary Russian government began divesting itself of its great paintings housed in the storerooms of the Hermitage in St. Petersburg and, along with pieces of fine French furniture, sold them at auctions abroad. The core of the collection assembled by Catherine the Great—namely, Western European masters—was removed from the Hermitage and acquired, via an agent, by Andrew Mellon. Today, these acquisitions are housed in the National Gallery in Washington, D.C.

At the same time, Basily, with the help of a representative and undoubtedly with the financial support of his wife and father-in-law, began collecting artworks of Russian painters of the eighteenth century, little known outside Russia. Some he purchased in Berlin and in Paris, others in New York, over a period of two decades. The Basilys thus formed the nucleus of a collection of major significance, to which they added the European paintings and objets d’art that are today also a part of the de Basily Room.

In 1939, with Germany threatening Europe, the Basilys packed their art collection, left their house near the Bois de Boulogne, left Paris on the Rome express train, and sailed from Genoa on the Italian liner Rex to arrive in New York City in early November, to be with her father (he died in 1941).

Nicolas de Basily, who was well-known in foreign affairs throughout Europe and in the United States, volunteered his services to the State Department and, in response, was asked why he didn’t just go back to Russia. Basily replied, “Sir, you are certainly aware that there has been a change of regime in Russia. It is no longer my country.”

In 1942 the Basilys moved to South America to settle in Uruguay, and remained there the rest of their married lives. Among their friends and visitors were many Russians, as had been the case in Paris, who often included the first cousin of Czar Nicholas II, the Grand Duchess Marie Pavlovna.

The Basilys never returned to Russia, they never had children, and they never regained Basily’s lost lands and estates, or his fortune.

Nicolas de Basily died at the age of eighty in 1963, his heart full of memories of a lost world. He had been forced first to flee his homeland and then to leave his adopted home, Paris. He had succeeded, however, in writing a history of Soviet Russia, published in Europe in four languages in 1938. Titled Russia under Soviet Rule, it was noted for its descriptions of the last days of imperial Russia and was awarded a prize by the Académie Française. He was, in addition, recognized as a Commander of the National Order of the French Legion of Honor.

Ill health had prevented Basily from editing the memoirs of his distinguished diplomatic career, but these were published in English by the Hoover Institution Press in 1973. In 1975 the press also published those of his widow, Memoirs of a Lost World, a captivating narrative of aristocratic and diplomatic lives, of which the Nicolas de Basily Room is a living legacy.

As a widow, Madame de Basily spent the remainder of her life traveling between Europe and the United States, living in the Carlyle Hotel in New York City, the Ritz in Paris, and the Hotel Richemond in Geneva. She remained devoted to her husband’s memory, which explains why, at the conclusion of her introduction to the collection, she wrote the following:

My husband loved these paintings deeply. They were all that remained of his lost country. . . . Today he would be happy—as I am—to know that at the other end of the world these beloved treasures are now tended by understanding hearts and hands.

Nicolas de Basily’s Russia under Soviet Rule, written in exile, was noted for its descriptions of the last days of imperial Russia. It was awarded a prize by the Académie Française.

She died in Switzerland in 1989 at the age of ninety-eight. Her ashes rest next to those of her husband in Baltimore, while her memory abides with those still at the Hoover Institution who were fortunate to have known her.