Yet another crime the Soviet dictator got away with: defining genocide to exclude what he did. Hoover fellow Norman M. Naimark tells how it happened. By Cynthia Haven.

Mass killing is still the way a lot of governments do business. The past few decades have seen terrifying examples in Rwanda, Cambodia, Darfur, Bosnia, and elsewhere. Murder on a national scale, yes—but is it genocide? “The word carries a powerful punch,” says Hoover senior fellow Norman Naimark, a history professor at Stanford. “In international courts, it’s considered the crime of crimes.”

Nations have tugs of war over the official definition of the word genocide, which mentions only national, ethnic, racial, and religious groups. After all, how it’s defined can determine international relations, foreign aid, and national morale. Witness the annual international tussle over whether the 1915 Turkish massacre and deportation of the Armenians qualifies as genocide.

Naimark, author of the new book Stalin’s Genocides (Princeton University Press, 2010), argues that the world needs a much broader definition of genocide that includes nations killing social classes and political groups. His case in point: Stalin, perpetrator of the multiple examples behind the book’s plural title.

Naimark argues that the Soviet elimination of a social class, the kulaks (higher-income farmers), the subsequent killer famine among Ukrainian peasants, and the notorious 1937 order that called for the mass execution and exile of “socially harmful elements” as “enemies of the people” were, in fact, genocide.

“I make the argument that these matters shouldn’t be seen as discrete episodes, but seen together,” says Naimark, an authority on the Soviet regime. “It’s a horrific case of genocide—the purposeful elimination of all or part of a social group, a political group.”

Stalin had nearly a million of his own citizens executed, beginning in the 1930s. Millions more fell victim to forced labor, deportation, famine, massacres, and detention and interrogation by Stalin’s henchmen.

Genocide was defined by the 1948 United Nations Convention on the Prevention and Punishment of the Crime of Genocide. The convention’s work was shaped by the Holocaust, says Naimark. “A catastrophe had just happened, and everyone was still thinking about the war that had just ended. This always occurs with international law—they outlaw what happened in the immediate past, not what’s going to happen in the future.”

Both Hitler and Stalin, Naimark says, “chewed up the lives of human beings in the name of a transformative vision of Utopia. Both destroyed their countries and societies, as well as vast numbers of people inside and outside their own states. Both, in the end, were genocidaires.”

All early drafts of the U.N. convention included social and political groups in the definition of genocide. But the pen was guided by one hand that wasn’t in the room. The Soviet delegation vetoed any definition of genocide that might include the actions of its leader, Josef Stalin. And the Allies, exhausted by war, deferred to their Soviet comrades—to the detriment of subsequent generations.

Naimark argues that the narrow definition of genocide is the dictator’s unacknowledged legacy to us today.

Accounts “gloss over the genocidal character of the Soviet regime in the 1930s, which killed systematically rather than episodically,” says Naimark. In the process of collectivization, for example, thirty thousand kulaks were killed directly, mostly shot on the spot. About 2 million were forcibly deported to the Far North and Siberia. 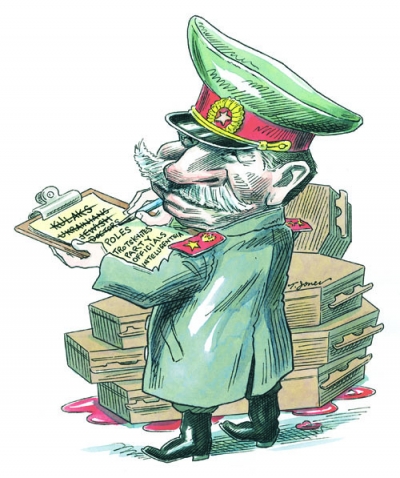 They were called “enemies of the people,” as well as swine, dogs, cockroaches, scum, vermin, filth, garbage, half animals, apes. Activists promoted murderous slogans: “We will exile the kulak by the thousand when necessary—shoot the kulak breed. . . . We will make soap of kulaks. . . . Our class enemies must be wiped off the face of the earth.”

One Soviet report noted that gangs “drove the dekulakized naked in the streets, beat them, organized drinking bouts in their houses, shot over their heads, forced them to dig their own graves, undressed women and searched them, stole valuables, money, etc.”

Both Hitler and Stalin, Naimark says, “chewed up the lives of human beings in the name of a transformative vision of Utopia.”

The destruction of the kulak class triggered the Ukrainian famine, during which 3 million to 5 million peasants died of starvation.

“There is a great deal of evidence of government connivance in the circumstances that brought on the shortage of grain and bad harvests in the first place and made it impossible for Ukrainians to find food for their survival,” Naimark writes.

We will never know how many millions Stalin killed. “And yet somehow Stalin gets a pass,” Ian Frazier wrote in a recent New Yorker article about the gulags. “People know he was horrible, but he has not yet been declared horrible officially.”

Time magazine put Stalin on its cover eleven times. Russian public opinion polls still rank him near the top of the greatest leaders of Russian history, as if he were just another powerful but bloodthirsty czar.

There’s a reason for Russian obliviousness. Every family had not only victims but perpetrators. “A vast network of state organizations had to be mobilized to seize and kill that many people,” Naimark writes, estimating that tens of thousands were accomplices.

“How much can you move on? Can you put it in your past? How is a national identity formed when a central part of it is a crime?” Naimark asks. “The Germans have gone about it the right way,” he says, pointing out that Germany has pioneered research about the Holocaust and the crimes of the Nazi regime. “Through denial and obfuscation, the Turks have gone about it the wrong way.”

Without a full examination of the past, Naimark says, it’s too easy for it to happen again.

Toward the end of his life, Stalin may have been preparing another genocide. We’ll never know whether the concocted conspiracy of Jewish Kremlin doctors in 1952 would have resulted in the internal exile of the entire Jewish population. Whatever plans existed ended abruptly with Stalin’s death in March 1953, as rumors of Jewish deportations were swirling.

Time magazine put Stalin on its cover eleven times. Russian public opinion polls still rank him near the top of the greatest leaders of Russian history.

One of Stalin’s colleagues recalled the dictator reviewing an arrest list (really a death list) and muttering to himself: “Who’s going to remember all this riffraff in ten or twenty years’ time? No one. . . . Who remembers the names now of the boyars Ivan the Terrible got rid of? No one. . . . The people had to know he was getting rid of all his enemies. In the end, they all got what they deserved.”

Who remembers? If Naimark has his way, perhaps we all will: “Every family had people who died. I’m convinced that they need to learn about their own past. There’ll never be closure, but there will be a reckoning with the past.”

Reprinted by permission of the Stanford Report. © 2010 The Board of Trustees of the Leland Stanford Junior University. All rights reserved.