The country is a roundabout where the world's great powers collide with regional players like ISIS. 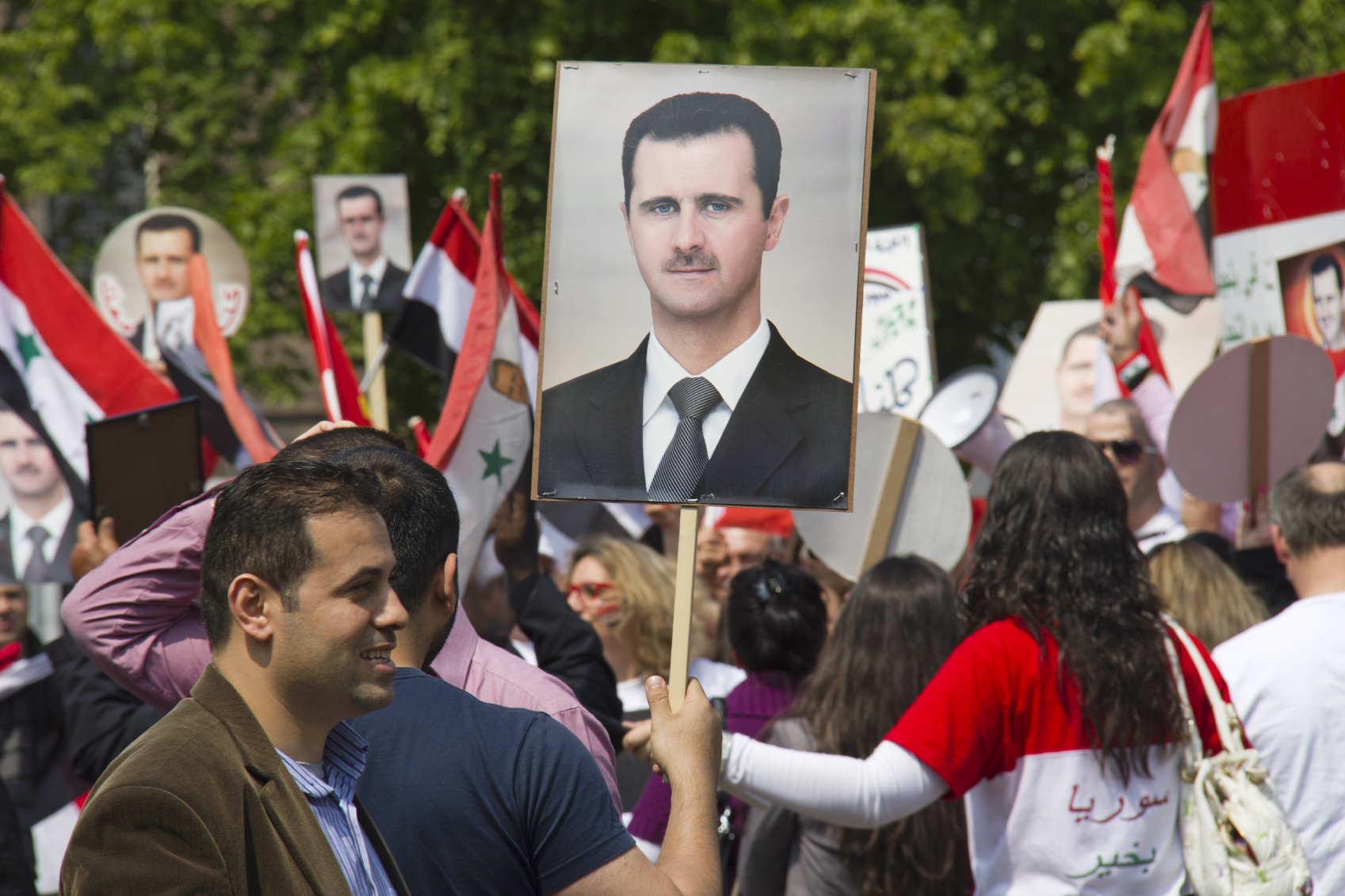 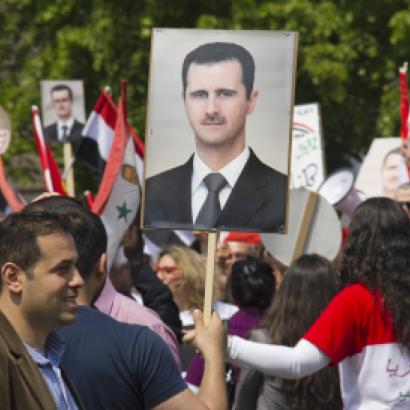 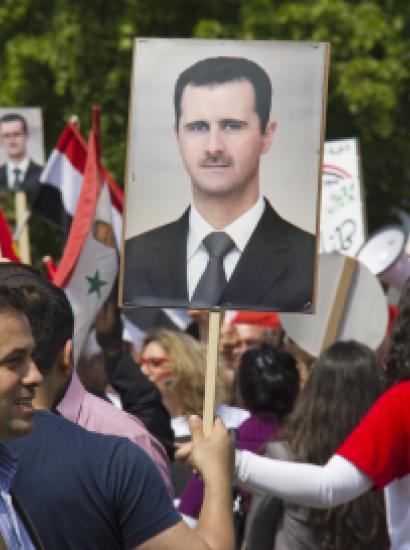 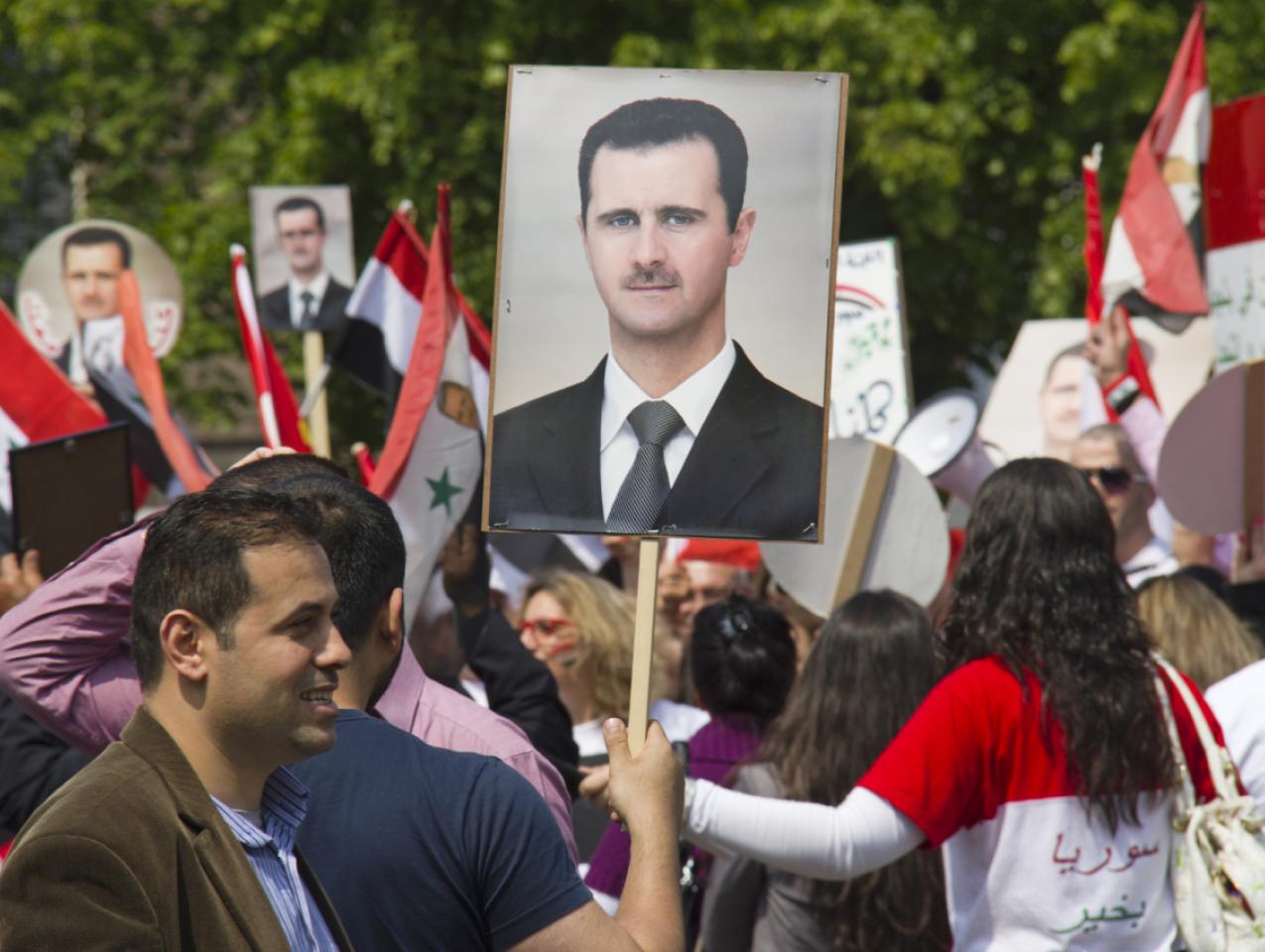 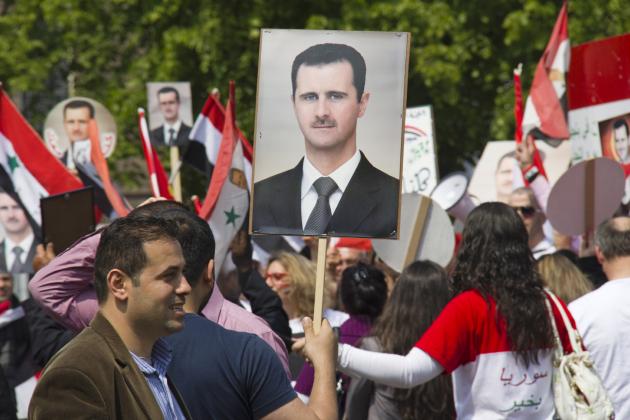 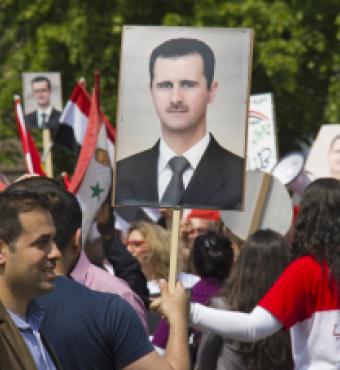 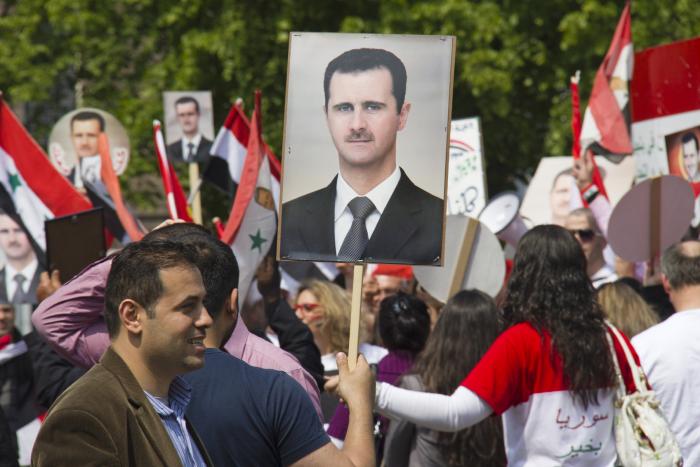 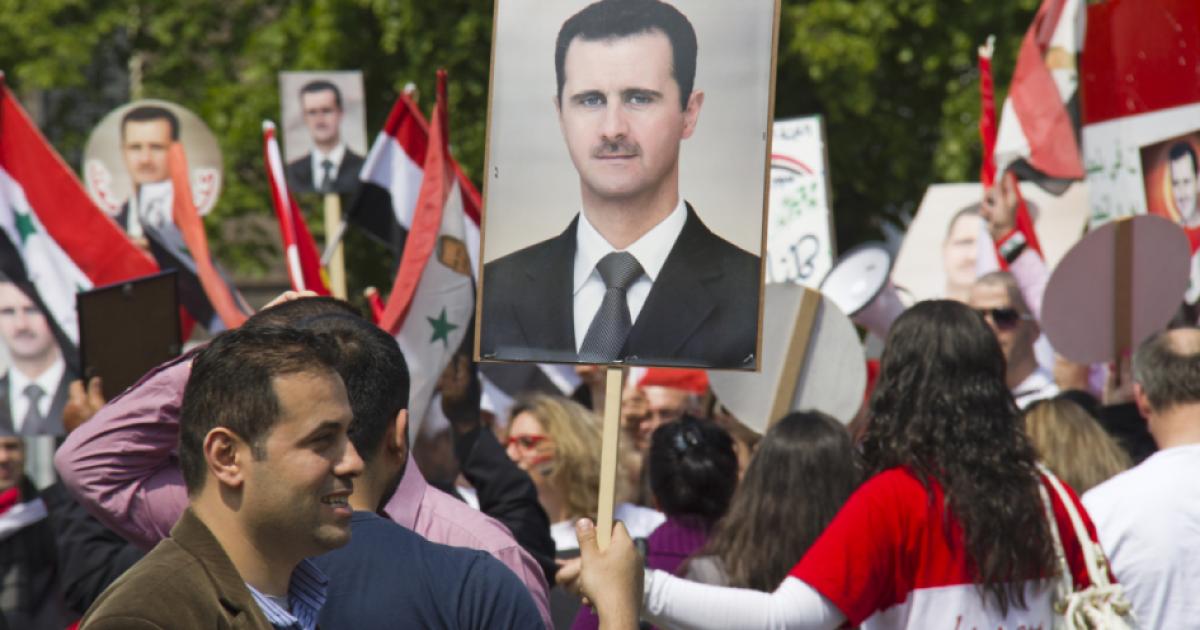 In 1947, Arnold Toynbee appeared on the cover of Time magazine. At the time, he was the world’s most renowned scholar, author of the monumental ten-volume A Study of History, praised by the historian William Hardy McNeill for “taking all the knowable human past as his province” and finding “rhythms and patterns which any less panoramic view could scarcely have detected.” Toynbee’s reputation soon plummeted when historians turned away from studying big ideas to nibble away at small-scale trends. But his unique perceptions still are relevant. Decades ago, he recognized that “two relatively small patches of geography”—one in “the Oxus-Jaxartes basin,” i.e. Afghanistan, and the other in Syria—have been “roundabouts” where the traffic of civilizations and religions across the world come together, jostle, and collide at exceptionally close quarters. Just as Afghanistan has proven elusive to conquer and tame over the years, so too is Syria a place of chaos and instability, which is today sucking the great powers of the world into its whirlwind.

History has drawn outside powers into Syria, often in violent sequence. Alexander the Great took it as the pivot point for world conquest, then Crassus, in Rome’s First Triumvirate, tried the same thing and failed. Tacitus reports how Emperor Tiberius put his most popular young rival in command there, confident that the place would do away with the parvenu. Early Christian holy shrines dotted the valleys. Roman, Persian, and Mongol armies swept in and were swept away. Later, the student T.E. Lawrence would survey the array of Crusader Castles strategically aligned to control the spine of the region. And in the early twentieth century, the Kaiser’s German strategists saw Syria as the linchpin of the “Berlin to Baghdad” railway, by which they could take suzerainty over the collapsing Ottoman Empire.

Today, too, many disruptive forces—“the traffic” in Toynbee’s term—jostle one another in the Greater Syrian space, from Russia to Israel to the United States to ISIS. Each holds potential for shoring up or battering down elements of the international order. Three categories stand out:The first is the state as the fundamental unit of world affairs. With the collapse of the Ottoman Empire and Caliphate after the First World War, the entire Middle East was brought on course to enter the modern international state system. If that structure is collapsing, world order as a whole is jeopardized. The possibilities reveal the stakes: What will happen to America’s long commitment to the sovereignty and territorial integrity of Lebanon? Can Saudi Arabia define itself as a true state rather than a tribal royal family? Iran’s double game of playing a legitimate state role while pursuing its revolutionary ideology has been exposed but not repulsed even as it accelerates preparations to attack Israel from Lebanon. Can Iraq be guided to relative stability as a reformed state encompassing Shia and Sunni and protective of minorities? Should the Kurdish people establish a state? Autonomy short of statehood has served the Kurds well; declaration of a Kurdistan could arouse the dogs of war on every border of such a new state. The maelstrom of these forces is Syria: even if the state borders of Syria are re-affirmed, the likelihood of even more horrific layers of war with big power involvement is mounting.

The second area implicated in the Syria crisis is international conventions. Iran’s 2015 “deal” with the United States has made Tehran a de facto threshold nuclear weapons state while failing to constrain its advances in ballistic missile technology or its undermining of regional order. Iran has used the Syrian roundabout to extend a sphere of influence in a corridor to the Mediterranean, further enhancing its profile as an aspiring nuclear weapons power. Other regimes in the region now must consider whether to match Iran’s nuclear breakout. If left unaddressed, Iran’s nuclear program will mean the end of the Non-Proliferation Treaty, one of the pillars of the international system. Is the idea of a Nuclear Free Zone for the Middle East, on the order of the 1967 Treaty of Tlatelolco in Latin American, an utter impossibility?

The U.S. “red line” against Assad’s use of chemical weapons was not enforced and Russia stepped in to claim that all such weapons had been located and collected.  This is demonstrating that the Syrian War is rendering the Chemical Weapons Convention of 1993 nugatory. Evidence that North Korea is linked to the Assad regime’s use of chemical weapons reveals that the roundabout’s spin-off effect can reach around the world.

The Genocide Convention also has been mocked by the course of seven-plus years of conflict in Syria. Over half a million people have been killed with several million displaced or in refugee flight through the region and beyond, amounting to the most extensive human disaster since the Second World War. The language of the Genocide Convention was so specifically drawn that virtually no major human cataclysm precisely falls under its terms. Now, the international commitments against genocide clearly require renovation and enforcement, but they instead are circumvented and openly defied.

The international conventions concerning the laws of war are also being challenges. One fundamental principle is that states must field professional militaries. But this idea, which was repudiated by Russia in Ukraine, was even more blatantly violated by Russia’s battalion-sized unmarked attack on the U.S. base at Deir al-Zor in early February.

The third element coming undone by the Syrian War is the very notion of alliances. The Roundabout War in Syria, as Toynbee might call it, began in 2011 and has drawn in Russia, Iran, Turkey, Iraq, the Kurds, and an array of factions. Most likely Israel, Lebanon, Jordan, the Gulf Arab states, and others will also join the mix. As dangers gather and threats expand, the question of alliances is paramount. The United States does not have a single alliance-category relationship in the Middle East that does not urgently require re-strengthening, reappraisal, revival, or revision. If the very concept of America’s alliances is not shored up, deterrence will fade, partners and friends will make new accommodations, and the chances of avoiding a new, wider war will vanish. While Turkey remains in NATO, President Erdogan is shaping new quasi-alliance relationships with Russia and Iran. The possibility of a “great alliance shift” with grave consequences for Asia and the Middle East, will become more likely if the United States does not buttress its relationship to key allies in Maritime Asia and with NATO and non-NATO partners.

The Syrian roundabout and the modern international state system are two examples of Toynbee’s big idea: the intelligible field of study. That is, you need to know the shape and scale and core attributes—physical and intellectual—of the culture, politics, and power of the entity involved before you can draw up your approach to it. This is the starting point for understanding world order as a whole. The geostrategic roundabout and the globe-spanning international structure are vastly different, yet in each theory and practice are joined while ideals and realities need to be bridged.

In the Syrian, the state—both as a concept and a political reality—weighs heavily. At the foundation of the Syrian crisis is the fact that Syria is a recognized, bounded state in the international state system. Now, undeniably, the Syrian state has been shattered and will not return to legitimate statehood without major diplomatic, political, and economic measures undertaken by responsible states of the system itself. What is clear at this moment is that two regimes, Iran and Russia, in conjunction with various militias and factions, are operating both as states and as spheres of influence ideologically opposed to the established international system of states. They are aiming to solidify a Russian-backed northern Middle East corridor, Shia-controlled, from the western Afghan border to the Mediterranean. But before that goal becomes a reality, they will have to deal with the hell that is the Syrian Roundabout today.

What does history’s long record about this geostrategic place suggest about how to manage it, if it can be managed at all? There are three possible ways of approach, each one full of risk and difficult to achieve.

One is to let the roundabout do its work, centrifugally and centripetally spinning the on-the-ground parties into a total maelstrom until the system collapses into exhaustion, which will hopefully make the area ready for reconstruction. The other is to start trying to stabilize the region by establishing fortified lines of communication, strong fortress-like points capable of holding and defending a network of territorial control in which security can be maintained and a population begin to take hold and recover daily life. (The resemblance of this proposal to Crusader castles cannot be gainsaid, for better or worse).

The best option may be the third: To send a message to the wrongdoers. This path falls somewhere between doing nothing and making a long-term commitment. It means Tomahawk cruise missiles and carrier-based airstrikes. How to titrate such an operation at this time and place without activating a tripwire to big power warfare requires the most carefully coordinated skills of statecraft, which, however brilliantly managed, cannot ultimately succeed without a parallel, comprehensive diplomatic campaign.