The Vacuum In U.S. Syria Policy–And How To Fill It

More than a year and a half into their tenure, the Biden administration studiously avoids having a Syria policy. 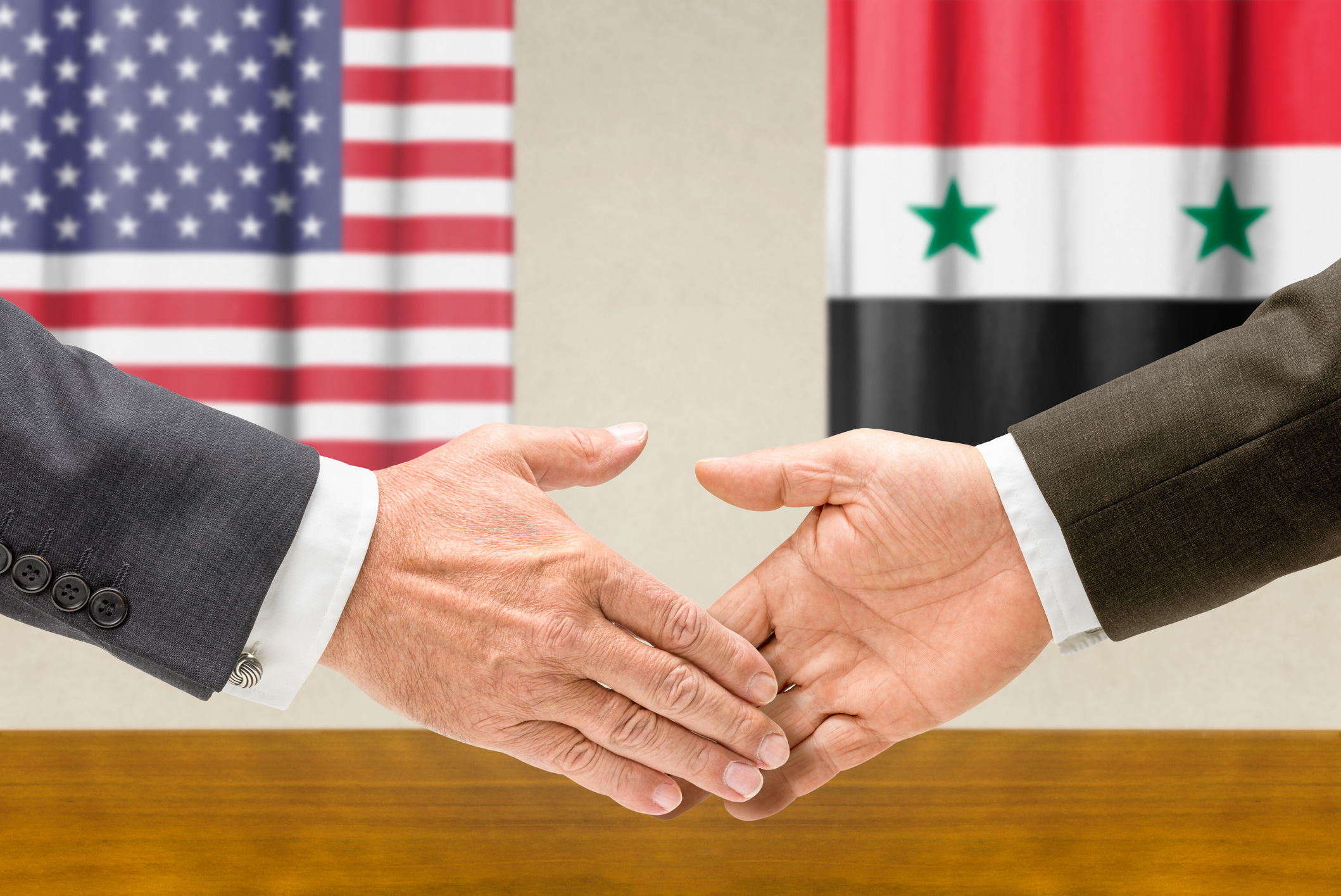 The Vacuum In U.S. Syria Policy–And How To Fill It 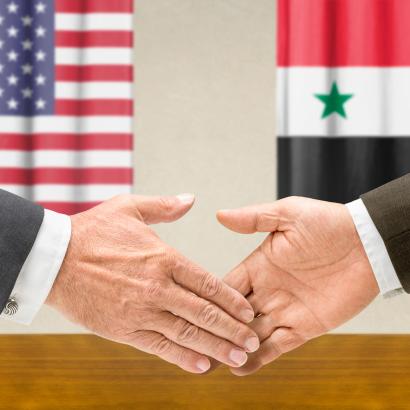 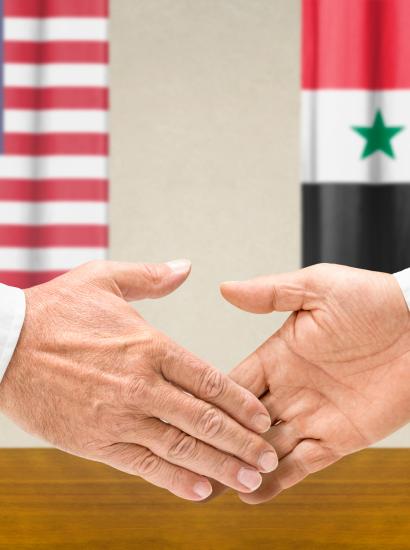 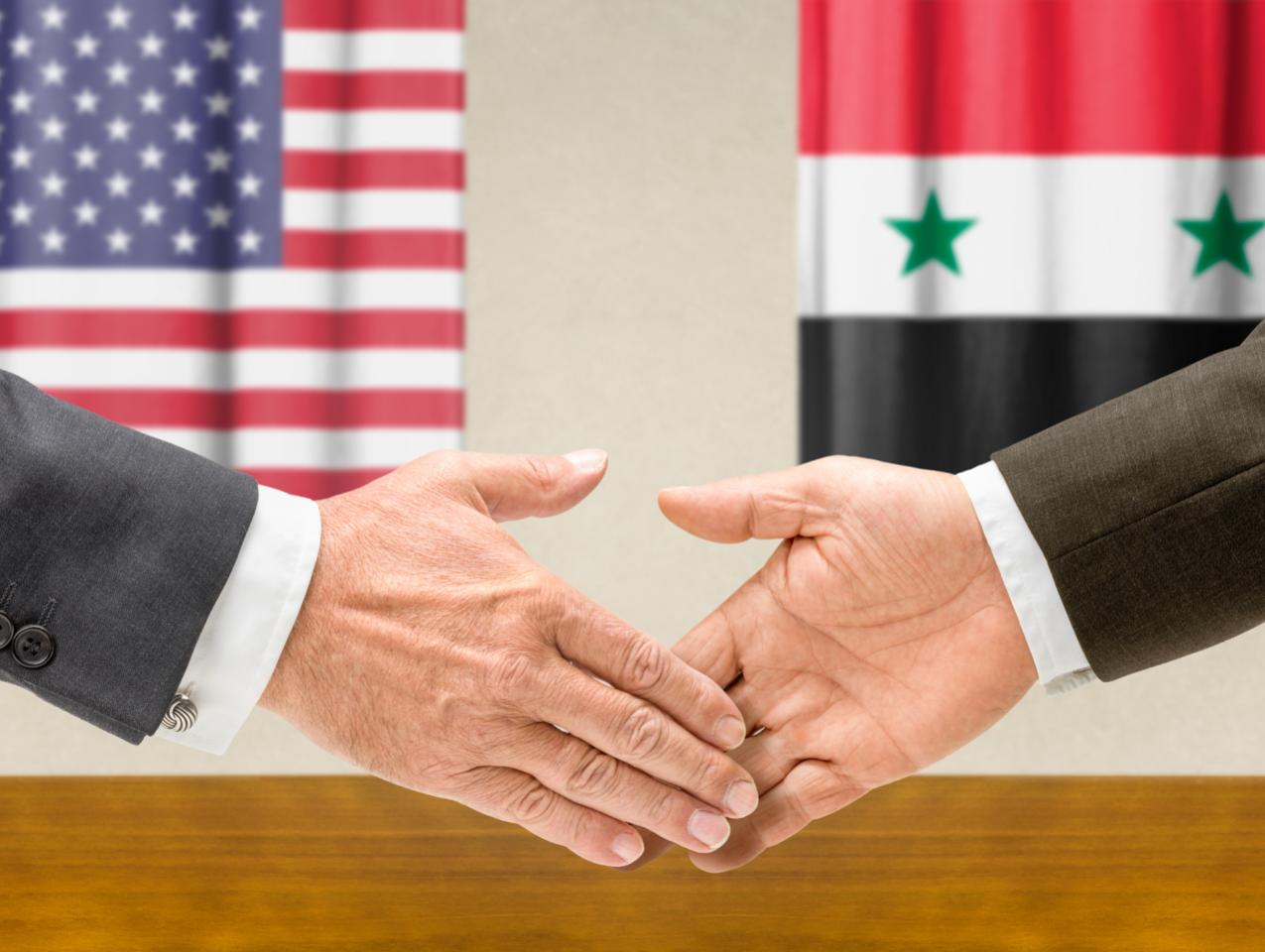 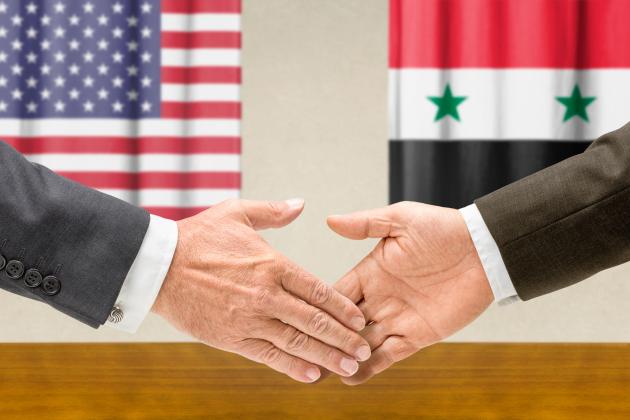 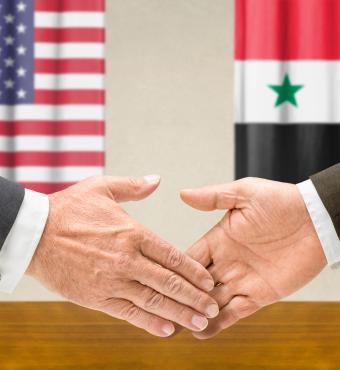 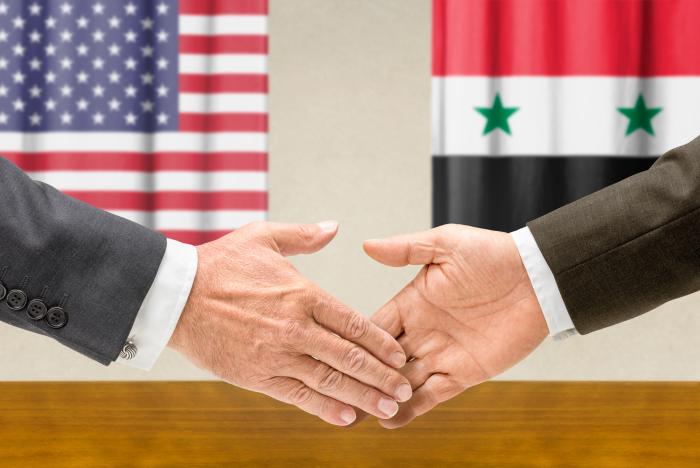 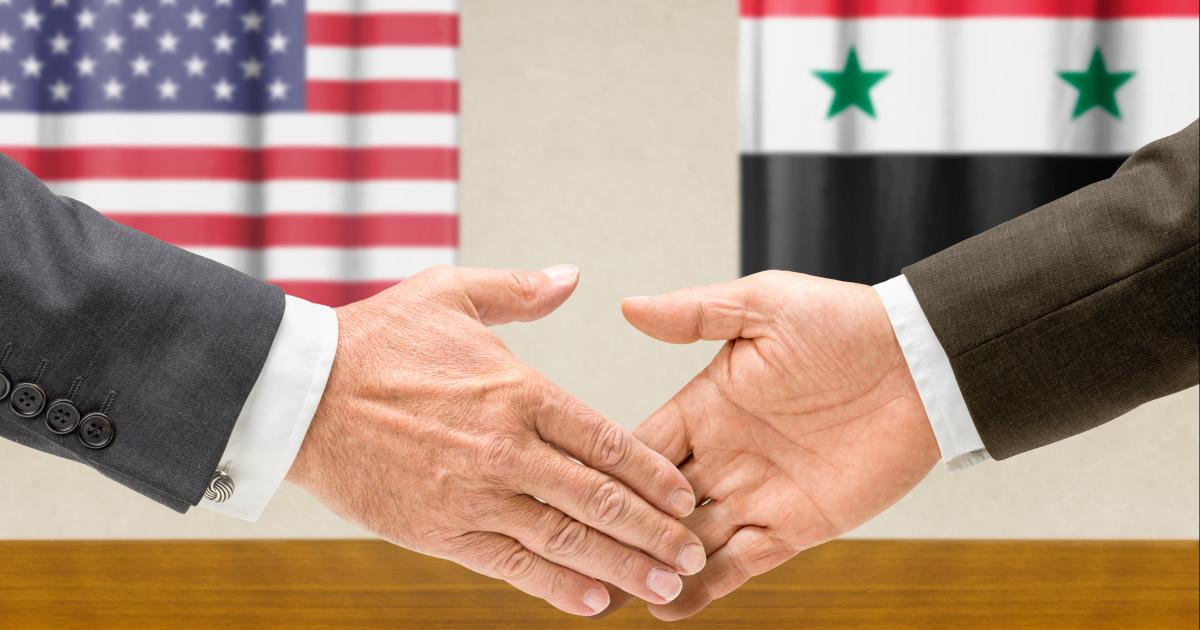 More than a year and a half into their tenure, the Biden administration studiously avoids having a Syria policy. The Obama administration veterans who came to regret investing significant policy bandwidth on Syria from 2011 to 2016 returned to office in January 2021 apparently assuming that if the United States shut its eyes to the Syrian conflict, then the Syrian conflict wouldn’t be able to see the United States. Alas, the world doesn’t oblige a superpower in this way. Pretending not to see risks doesn’t make them disappear.

The same dangers that compelled the Obama and Trump administrations to adopt a hands-on approach to Syria are still present. Terrorism, genocide, refugees, chemical weapons, ISIS detainees in weak northeastern Syrian jails, Iranian regime aggression, great power competition involving Russia, a Turkey-PKK conflict:  any of these could escalate into a regional or international crisis within Syria in any given week.

Against this broad problem set the Biden administration has chosen to narrow its focus, retaining the rhetorical goals of its predecessors but applying no plans or means to achieve any of them save counterterrorism and humanitarian assistance. What actions the U.S. does take are disconnected. The U.S. Ambassador to the UN, Linda Thomas Greenfield, has been energetic in trying to keep UN aid flowing into Syria, and CENTCOM commander General Erik Kurilla has leaned forward in stopping the Iranians from attacking his troops inside Syria. But these two initiatives stand alone, without a comprehensive Syria policy above them.

The Biden administration’s hands-off approach carries heavy opportunity costs and risks for other policy areas. Aside from Kurilla’s recent effort to stop Iranian attacks against U.S. bases, Syria is disconnected from the administration’s broader Iran policy. Pressure that could sway the recalcitrant regime in Tehran is never brought to bear on the brutal Syrian dictator Bashar al-Assad. Syria is also strangely disconnected from the broader U.S. policy on Russia and Ukraine where, likewise, were Assad dealt with forcefully, Putin might also feel the squeeze.

Little is said or done in Washington about other threats that emanate from Syria to endanger close U.S. allies. The Iranian regime’s ongoing campaign to turn Syria into a deadly IRGC outpost compels the Israeli air force to strike Iranian targets inside Syria multiple times a week. These strikes would have prompted an international crisis before 2011, but today they barely make the news. The recent rapprochement between Israel and Turkey after a decade of broken relations ought to be an opportunity for the U.S. to help two of its allies coordinate their efforts  on a common Assad-Iran problem, but there’s no indication the Biden administration is doing so. On Syria’s southern border, Jordan finds itself alone waging a violent border war with the Assad regime and Hizballah gunmen who are pushing narcotics into Jordan and the Gulf on a massive scale. And on the northern border, the U.S. shuttle diplomacy that sought, before 2021, to end or mitigate the dangerous conflict between Turkey and the YPG has gone dormant. Turkey’s recent outreach to Assad is born of Ankara’s frustration with this border conflict–and is an example of what happens when the U.S. leaves a leadership vacuum. Turkey isn’t alone, either. Other U.S. allies in Europe and the Arab world privately express similar frustrations with U.S. inaction and explore their own solutions that may or may not be compatible with U.S. interests.

Back in Washington, Congress, too, has grown impatient with the Biden administration’s passivity on Syria, especially the administration’s failure to enforce the Caesar Act. Key members of Congress have repeatedly warned the administration to stop encouraging an “Arab gas pipeline” that would cross Syrian territory and deliver transit fees and gas to Assad himself. It’s likely there will be a Congressional intervention in Syria policy after the mid-term elections in November. Already key committees have signaled they are ready to pass an updated Caesar Act–a “Caesar 2.0”-- that will close sanctions loopholes, thwart the pipeline deal, and make some sanctions against Assad and his allies mandatory. There will also probably be bills targeting Assad’s massive narco-trafficking of Captagon and prohibiting the U.S. from recognizing or engaging with Assad’s government.

Against this backdrop, it would be advisable for the Biden administration to take a handful of  policy steps—none of which would be costly--to put the U.S. back in a leadership role and protect against the risks that Syria poses to U.S. and international interests.

First, restore economic pressure against Damascus. Doing so would give the U.S. its best chance to compel Assad to end his war against the Syrian population that is the fundamental driver of all else that is going wrong in Syria. The U.S. should implement a comprehensive plan to shut down the main streams of Assad’s revenue:  Captagon trafficking, skimming from UN aid, and forcing Syrian expatriates to pay extortionate fees to renew passports and register vital documents. Where UN aid is concerned, the Biden administration and Congress should work together to stop U.S. funds from going to the World Food Program and other UN agencies in Damascus until they do transparent due diligence on their contractors and subcontractors.  Right now, there is compelling evidence that UN contracts go mainly to Assad regime-associated front companies.

There’s no valid reason for the administration not to enforce the Caesar Act, as Congress clearly wishes. There has been little enforcement of the law since the Biden administration came into office, inexplicably giving Assad and his mafia entourage a respite from U.S. economic pressure. The administration should also act against sanctions defiance outside Syria. The most prominent example is Assad’s sanctioned airline Cham Wings, which despite U.S. sanctions is flying into the UAE, Jordan, Kuwait, Armenia, and other countries.  The UAE, Jordan, and Kuwait know they are violating the Caesar Act by letting Cham Wings have ground services at their airports, but they calculate the U.S. is not serious about enforcing the sanction against them.  It would probably require one warning letter from the Treasury Department to put a stop to this.

ICAO (International Civil Aviation Organization) certification for Damascus and Aleppo airports should also be on the table. If the IRGC and Hizballah are using Assad’s airports to wage war, why should those airports be certified for commercial airlines’ use? It would be a relatively straightforward task to highlight the misuse of Syria’s airports so that insurers won’t cover airlines that fly there.

Concerning Assad’s extortionate passport fees, it would be a creative, constructive move for the U.S. to advocate for a new UN agency to provide travel documents and vital records registration circumventing the Assad regime until there is a different government in Damascus. It’s also time to end the U.S. policy of strict reciprocity in issuing visas to Syrians. Because Assad limits Americans to single-entry stays of only 90 days in Syria, USCIS policy is to follow suit and limit all Syrian passport holders to single-entry stays of no more than 90 days in the United States. As a result, Assad effectively sets the terms on which the Syrian opposition, most of whom hold only Syrian passports, can come to the United States. During my tenure as U.S. Special Envoy for Syria, I faced constant difficulties in trying to host Syrian opposition leaders and civil society groups for consultations in Washington. Most of the time USCIS would deny my would-be visitors a visa or restrict the visa into pointlessness, despite the clear U.S. interest in coordinating as closely with the opposition and civil society as possible. This Orwellian arrangement should end.

Second, connect Syria to the broader U.S. policies on Russia and Iran. The Caesar Act was meant to enable sanctions against Russian and Iranian involvement in Syria, but the U.S. has not used this authority. The U.S. should put General Kurilla’s deterrence operations against the IRGC into a broader policy of pressuring the Iranians into withdrawing their troops and militant proxies from Syrian soil. It defies reason to grant Tehran vast relief from U.S. sanctions through a renewed nuclear deal when the IRGC is actively trying to kill U.S. troops in Syria and Iraq.

Where Russia is concerned, the administration should sanction every Russian company and military unit that is now or has ever been active in Syria. The U.S. should also make it impossible for Russia to gain concessions by continually threatening to veto UN cross-border aid into Syria. It’s long past time for the U.S. and other allies to develop a viable alternative to UN aid to feed the more than four million people of northwest Syria.

Third, the U.S. should immediately join the emerging effort–described in detail elsewhere in this Caravan issue–by European courts to hold the Assad regime accountable for war crimes and other atrocities. The U.S. should support the formation of an international tribunal on Syria in The Hague, as previous administrations did with the International Criminal Tribunal on Yugoslavia and the Special Tribunal on Lebanon that investigated the assassination of Rafiq Hariri. And the Biden administration should instruct the Justice Department and FBI to prioritize cases of U.S. citizens who have disappeared into Assad’s jails.

U.S. diplomacy on Syria doesn’t have to replicate the exercise in futility that saw Secretaries Clinton, Kerry, and Tillerson expending vast energy and hours going around in circles with Sergei Lavrov. But U.S. diplomacy on Syria needs to be more than it is today. The Biden administration needn’t do things that are high cost. But they can and should do things that are low or no cost. Syria will not sit still as the American superpower looks the other way. As noted elsewhere in these pages, the Syrian people are primed to explode again, because life in almost all parts of Syria has become unsustainable.  When it comes, the explosion could take any number of forms.  Are the U.S. and Europe ready for the risks or opportunities that could emerge then? Better to awaken from policy slumber now than to wait and be overwhelmed later.

Joel Rayburn is the Director of the American Center for Levant Studies, which focuses on political and security affairs in Syria and the surrounding region. He is also a research fellow at the New America Foundation and a visiting fellow at the Hoover Institution.  He is a former U.S. diplomat and retired U.S. Army officer.