The Defeat of ISIS 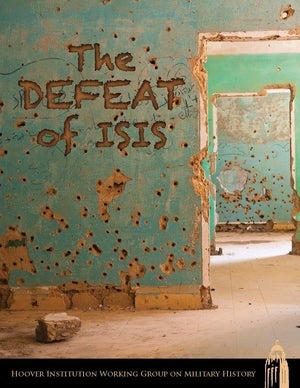 The destruction of ISIS is practicable, but requires more than just periodic bombing—and yet less than large infusions of conventional troops on the ground in the Middle East. Past American failures were not attributable so much to flaws in counter-insurgency doctrines or the inability of special forces and US military trainers and advisors to defeat terrorists and insurrectionists, as due to the absence of a consistent strategy, of a broad bipartisan political consensus, and of policies of intervention plainly articulated to the American people as cost-effective, achievable—and in the American national interest.

Implementing Stability in Iraq and Syria
by Max Boot

The Islamic State of Iraq and Syria (ISIS) ﬁrst captured American attention in January 2014 when its militants burst out of Syria to seize the Iraqi city of Fallujah, which US soldiers andmarines had fought so hard to free in 2004. Just a few days later ISIS captured the Syriancity of Raqqa, which became its capital. At this point President Obama was still deriding it asthe “JV team,” hardly comparable to the varsity squad, al-Qaeda. It became harder to dismissISIS when in June 2014 it conquered Mosul, Iraq’s second-largest city, and proclaimed anIslamic State under its “caliph,” Abu Bakr al-Baghdadi.

The Destruction of ISIS
by Peter R. Mansoor

The goal of the United States and its allies must be the total eradication of the Islamic State. Destroying ISIS begins with eliminating its self-styled caliphate in Iraq and Syria. This can be accomplished by arming local actors and assisting them with advisers, forward air control teams, and airpower. More importantly, the United States must work with regional partners to knit together a political solution to provide Iraqi and Syrian Sunni Arabs a measure of autonomy to prevent the reemergence of ISIS or its ideological successor. The United States must also wage a holistic campaign to combat ISIS elsewhere in the world. Means include pressuring ISIS affiliates through drone strikes and by strengthening partner states, using financial and legal means to impede terrorist financing, combating radicalization in cyberspace and on social media platforms, and focusing intelligence capabilities to uncover ISIS operatives seeking to conduct terror attacks in Europe and the United States.

Preventing Operational Atrophy in the Long War
by Vince Goulding

Bad or nonexistent national strategy manifests itself in suboptimal military responses.   The 2011 withdrawal of U.S. ground forces from Iraq is a classic example.  It threw away success garnered by the 2007 “surge” on the premise that Iraqi forces, aided by airstrikes and special operators, could stabilize the post-hostilities phase of Operation Iraqi Freedom.  Counterinsurgency operations must address their center of gravity: a secure living environment.  General purpose ground formations have historically been essential to achieving that end. Military forces should never be applied absent clear strategy; when they are, all the tools in the operational commander’s kit must be on the table.