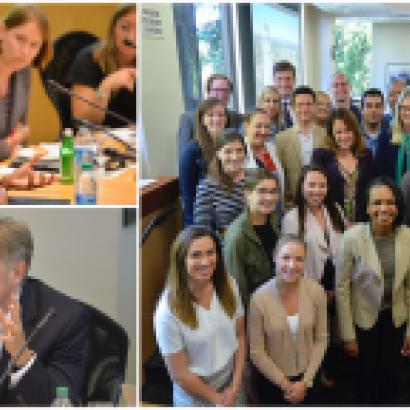 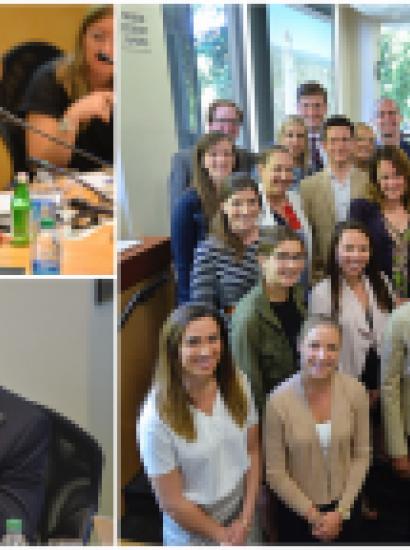 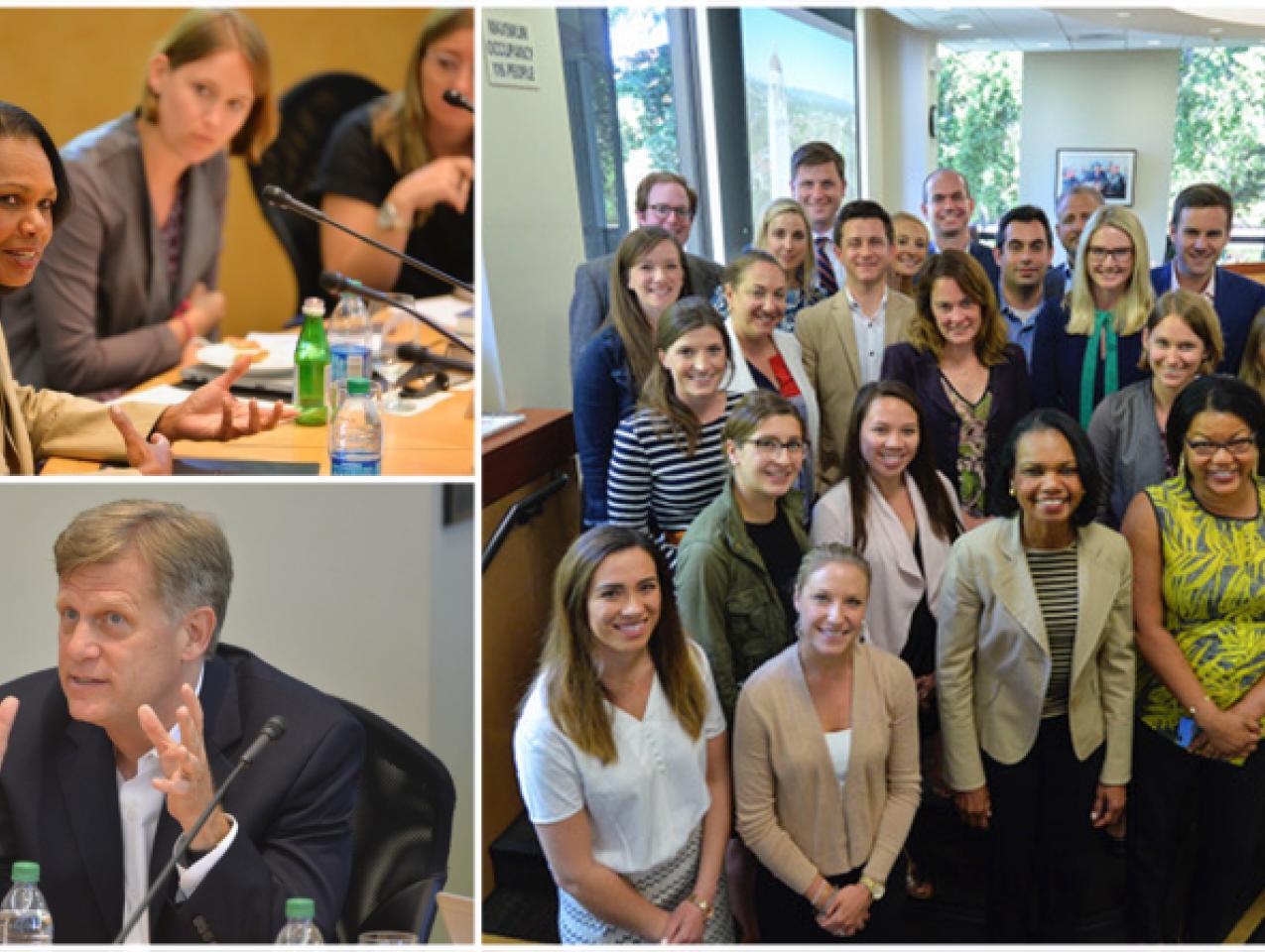 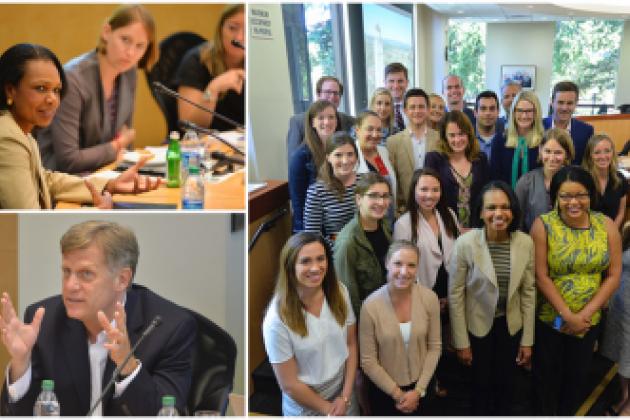 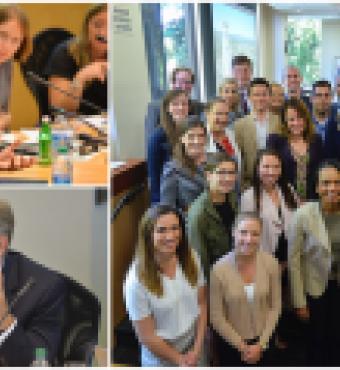 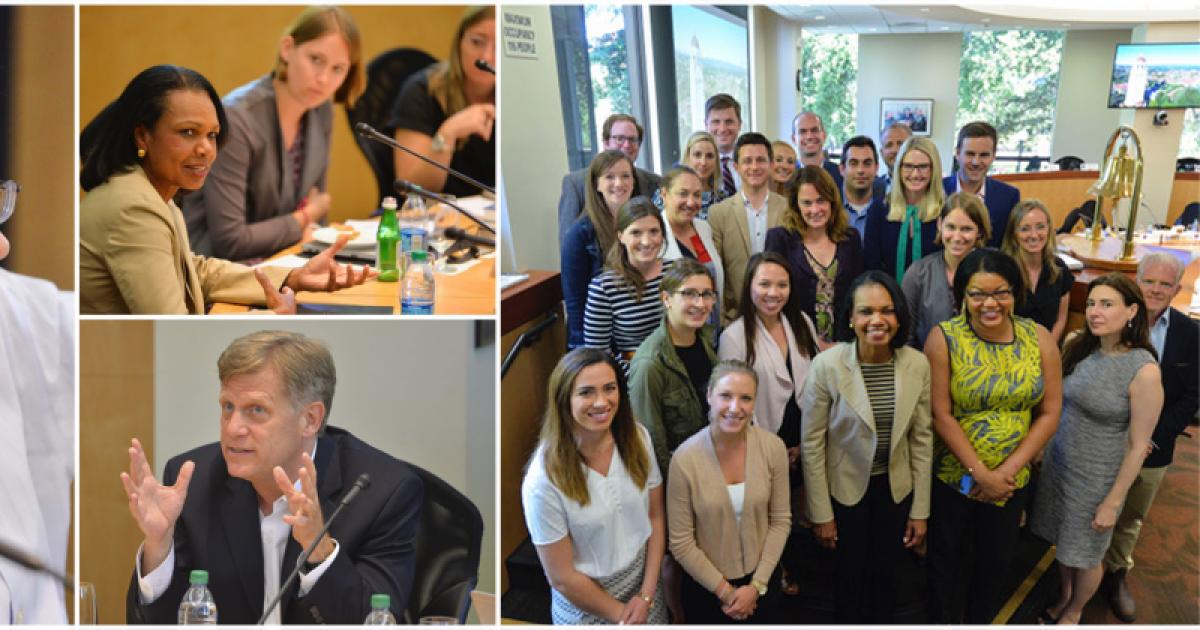 The event drew a half dozen Hoover national security experts and twenty-eight members of the national media from a variety of print and broadcast outlets, including Fox News, NBC, New York Times, Wall Street Journal, CNN, Washington Post, Washington Examiner, and Politico, among others.

The June 11 discussion, “Outside the Beltway,” came hours before the US-North Korea nuclear talks began in Singapore and included deep dives into that issue as well as the state of American diplomacy, the changing nature of global politics, Russia’s ambitions, and political Islam.

Eryn Witcher Tillman, director of public affairs for the Hoover Institution, said, "Our media roundtables are highly effective at connecting our scholars with national media on timely and important issues."

Auslin described the United States-North Korea talks as unprecedented and historic in scope—and yet personalities would matter. “Can you trust the tyrant?” he said in regard to whether North Korean leader Kim Jong Un can be expected to honor any agreement that might emerge in discussions with President Trump.

Before the talks even began, Auslin said, North Korea stood to gain the most in terms of global prominence, while the greatest risk was to  America, especially if a surprise grand bargain suddenly explodes as the talks wind down. “He’s a bold opportunist,” he said about Kim.

“It’s already a win-win for Kim Jong Un,” Auslin said. No matter what happens, North Korea comes out stronger than before the talks in Singapore with the Trump administration, he added. After all, the North Koreans' ultimate goal is to secure regime stability.

Auslin emphasized that “North Korea is not China’s puppet.” Yet, he added, many casual observers of Asian foreign policy mistakenly believe so. He also talked about the consequences of a possible US military withdrawal from the Korean peninsula, domestic political opinion on the US alliance against North Korea, and the changing geopolitical environment for the United States in Asia.

McFaul focused his conversation on Russian President Vladimir Putin and the evolution of his thinking.

“Putin’s been doing a lot of winning” lately, said the former US ambassador to Russia.

McFaul, who met Putin in 1991, described how the Russian leader moved from someone who somewhat favored markets and once flirted with cooperating with the United States after 9/11 to a far more autocratic leader today who has led aggressive incursions of Ukraine and Crimea.

Putin eventually soured on American leadership and democracy after the controversy surrounding the Russian elections of 2011 and democracy’s rise in Eastern Europe and the Middle East, McFaul said. Putin grew suspicious that America was meddling in other countries to boost the prospects of democracy.

“He sees our hand, the American hand, behind it all,” McFaul said about the Russian protests in the streets during the 2011 election and Ukrainian protests a couple years later.

Putin seeks to strengthen Russian and control its economy, weaken America, divide NATO, and attack democratic values around the world, according to McFaul.

“In the long run, we’ll win, but in the short run, Putin is putting up a lot of wins,” he said, citing Russian adventurism in Syria, the consolidation of power at home, perceptions of the United States in retreat, stronger Russian alliances abroad, and Putin's attempts to strain US transatlantic relationships while some countries' attitudes toward Russia seem to be slowly shifting in its favor.

McFaul explained that America and the West could best respond to Russia by focusing on free and fair elections at home and abroad, taking measures to combat misinformation and “fake news,” and boosting alliances like NATO. He advocates a “Reagan-style containment” toward Russian aggression.

Ali spoke about whether Islam could be reformed to the point where it accepted a division between state and religion.

“Is that possible? That’s the big-picture question,” she said. “My hope for that is at times stronger, and other times, I feel a little pessimistic,” noting the bright hope of the Arab Spring that eventually faded into theocratic realities in several countries.

However, Ali said she believes “push-back” against rigid Islamic rule exists more than many might assume. For example, Saudi Arabia is exploring modernization and the liberalization of its strict Islamic society, a development that might ripple throughout the Muslim world.

Ali said overhauling gender relations and the educational and justice systems are key goals in the Saudi Vision 2030 plan, the new reforms presented by Saudi Crown Prince Mohammed bin Salman that come with considerable financial backing but with clerical opposition. Bin Salman is leading his country’s strategy to revamp the Saudi economy and limit the power of the clerics over state affairs.

“Who is going to adapt to whom?” she asked.

Changing Islam from a blueprint for politics to something personal would transform the religion on a number of fronts, Ali said.

“If he (the Saudi crown prince) succeeds in what he is doing, that means there will be an upending of political Islam” throughout the Middle East, she said.