Did Radio Free Europe inflame the Hungarian revolutionaries of 1956? Exploring one of the Cold War's most stubborn myths. By A. Ross Johnson. 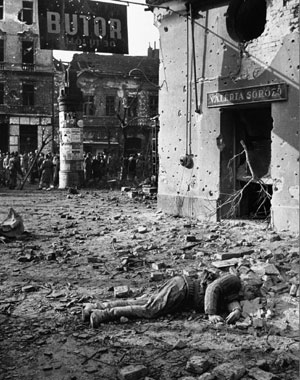 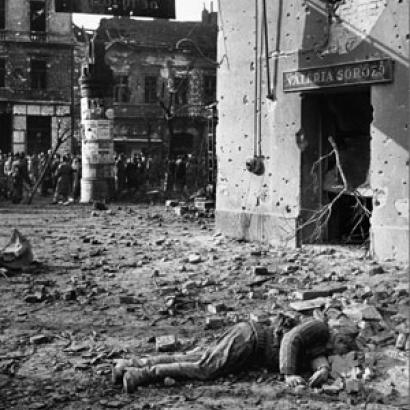 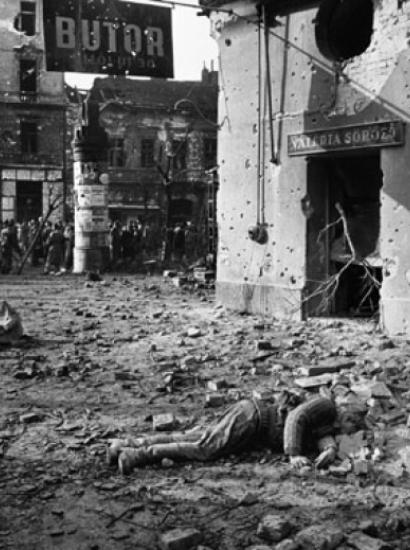 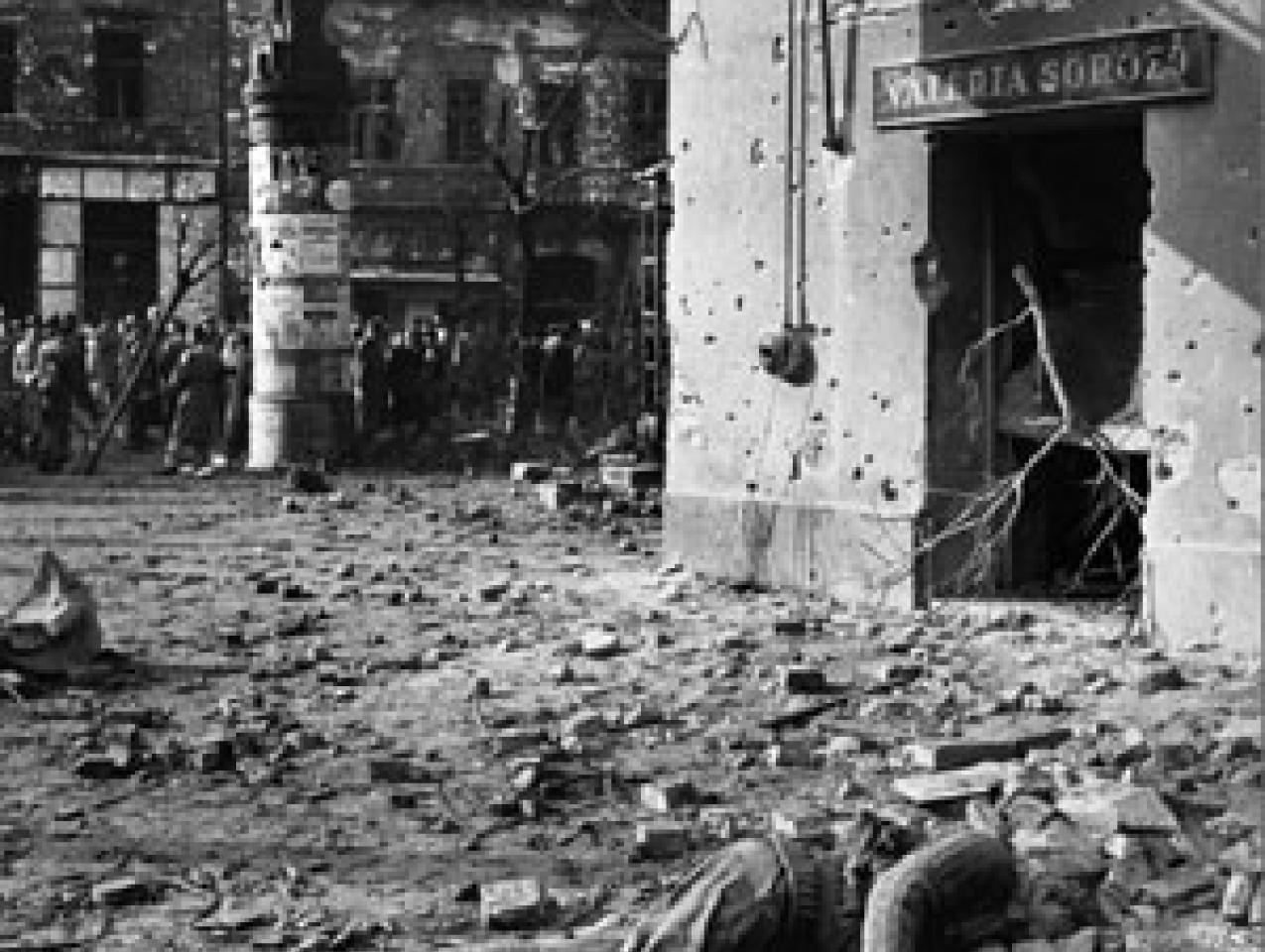 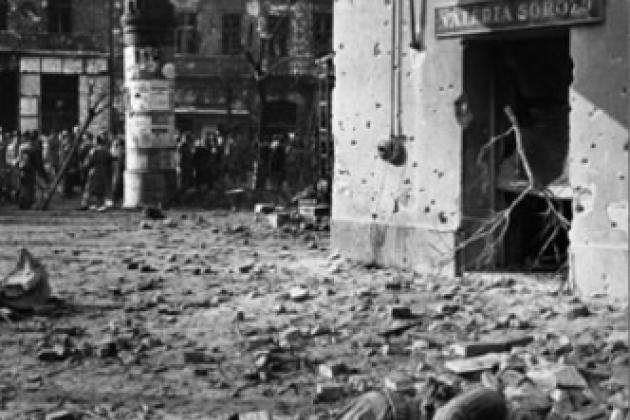 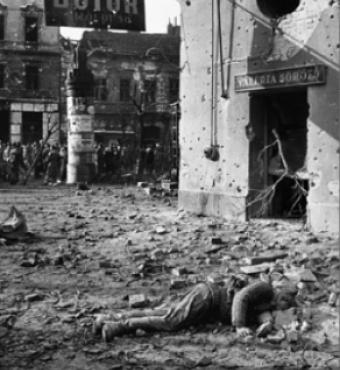 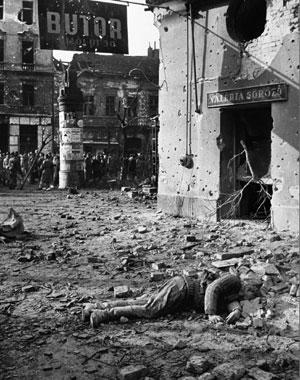 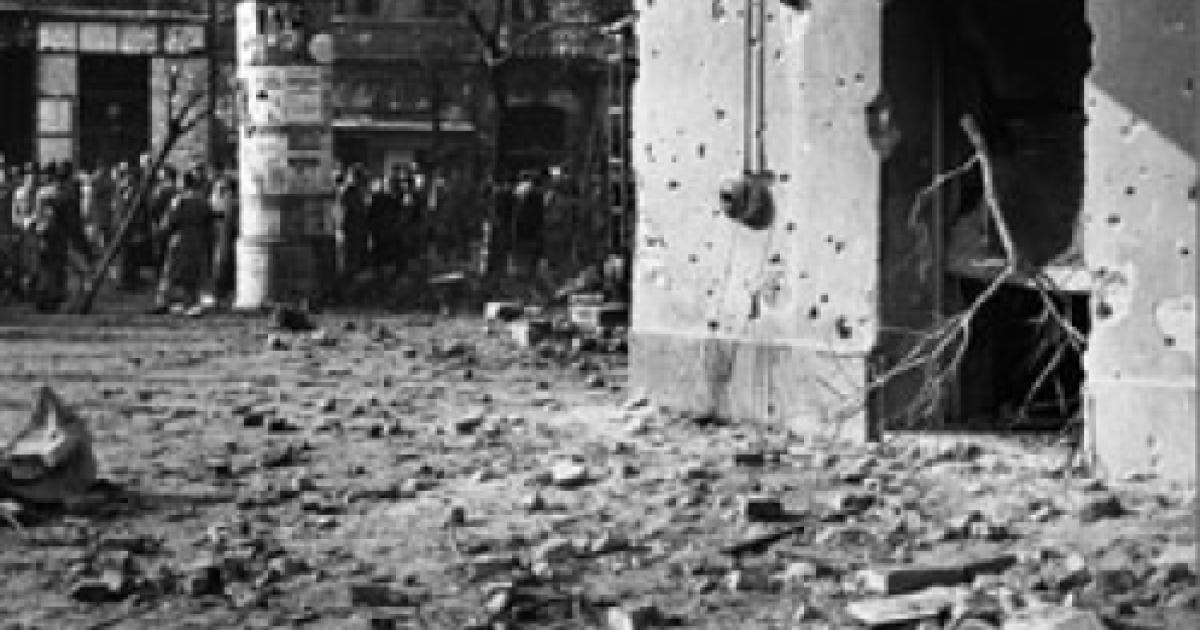 Fifty years ago, Radio Free Europe found itself swept up in a revolution. For four weeks in fall 1956, the U.S.-funded broadcaster reported on the Hungarian uprising against Soviet control—a revolt that ended in bloodshed, crushed hopes, and a reassertion of the Kremlin’s power over its satellite states. The episode left a lingering cloud over RFE. Among many scholarly and journalistic critics, it has been taken as fact that RFE’s broadcasting during the uprising encouraged the Hungarian revolutionaries to their doom by exhorting them to violence, sabotaging any political solution, and promising Western military aid that would never come.

In fact, a review of the broadcasting service’s actual role in the Hungarian uprising, based on materials in the Hoover Archives—RFE self-criticism, texts of programs, and tapes of all broadcasts recently recovered from German state archives—shows that RFE’s performance was flawed, but in ways different from, and more complex than, the critics and the accepted legend suggest. A fair reading of the evidence shows that RFE is not guilty of provoking a revolution and feeding it on false promises, charges that even many of the revolution’s participants believed after their failed uprising. 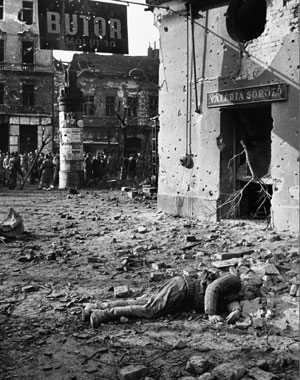 The documents in the Hoover Archives, including surveys of Hungarian refugees, help lift the fog from this insurrection and from the role of outside broadcasting. More broadly, the documentary evidence also suggests a framework for the editorial management of broadcasting that aims to promote human rights and freedom, such as expanded U.S. programming into repressive and potentially volatile countries such as Iran, Cuba, and North Korea, especially in times of crisis. The overarching lesson is that patrolling the line between legitimate information and incitement calls for caution, dedication to verifiable facts, a keen appreciation of how an audience in upheaval may interpret well-intended broadcasting, and rigorous internal editorial control.

Radio Free Europe was organized and funded by the U.S. government and beamed into Eastern Europe both to keep alive the hope of a better future and to make the Soviet empire a less formidable adversary. At the time of the Hungarian revolution, the service was only six years old. Funded secretly through the CIA from 1950 to 1971, and thereafter by open congressional appropriation, RFE provided information about the West to East Europeans cut off by the Iron Curtain. Located in Munich and broadcasting on short-wave transmitters from Germany and Portugal, RFE also gave East Europeans information about their own countries that was suppressed in the communist-controlled media. It was organized on a national basis— Hungarians talking to Hungarians, in this case—in a decentralized structure with entities such as the Hungarian Service (then called the Voice of Free Hungary) having primary editorial responsibility under the general oversight of American senior management. The Americans were in effect the publisher; the émigré Hungarians were the journalists and editors of daily programming that encompassed a wide array of topics focused on internal political affairs in Hungary, as well as cultural affairs and world events. Hungarians of all political persuasions credit Radio Free Europe (which regularly reached nearly half of the adult population) with helping to bring about the end of the communist system in 1989.

The crucible for RFE was October 1956, when a student demonstration in Budapest rapidly escalated into a spontaneous nationwide revolt against the communist government. Militias fought soldiers and police in the streets, and impromptu political councils seized local control from communists. Former prime minister Imre Nagy, who had been shunted aside by the Communists the previous year for his efforts at reform, was put forward as Hungary’s new leader. During his ten days in power, Nagy declared the revolt a legitimate mass uprising, invited other political parties to join the government, and announced that Hungary would withdraw from the Warsaw Pact. Soviet soldiers stamped out the nascent government in early November, and Nagy was arrested and eventually executed. 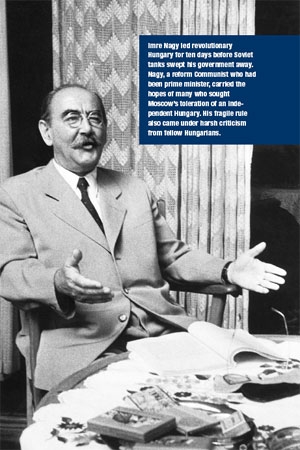 The main lesson from Hungary is that patrolling the line between legitimate information and incitement calls for caution, dedication to facts, a keen appreciation of how an anxious audience may interpret broadcasting, and rigorous internal control. 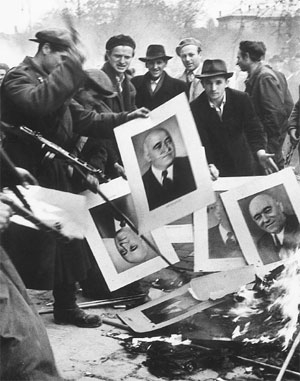 External broadcasting did have a pervasive reach during the uprising. A 1956 survey of a thousand Hungarian refugees in Austria concluded that foreign radio had been their major source of information during the revolution. Ninety percent said they had listened to foreign programs; of these, 81 percent frequently listened to RFE and 67 percent listened to both the Voice of America and the BBC. RFE unquestionably had large audiences and a great impact in Hungary during the 1956 revolution, but all Western broadcasters played a role. Of the many foreign stations that broadcast into Hungary during the revolution, only two—one run by Russian émigrés based in Germany and the other by Hungarian émigrés using Spanish facilities of the Franco regime—explicitly promised military assistance from the West, trumpeting purported volunteer forces that never materialized.

Nearly 40 percent of the refugees thought Western broadcasts had given the impression that the United States was willing to fight to save Hungary, even though RFE never promised such aid.

Radio Free Europe never promised such aid. Careful review of its 1956 Hungarian programming shows that no broadcast before the revolution called for insurrection, violent confrontation of the communist authorities, or maximalist anticommunist policies, and that no broadcast during the uprising appealed to Hungarians to continue armed struggle against the Soviet army. Among 500 Hungarian-language programs aired during a month of nearly round-the-clock broadcasting, only one—a review of Western news coverage on November 4—said while summarizing an article in the London Observer that a “practical manifestation of Western sympathy is expected at any hour.” This oft-quoted, ten-word hint of Western aid was RFE’s sole such lapse. 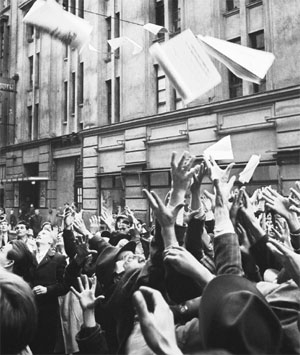 Yet nearly 40 percent of the refugees thought Western broadcasts had given the impression that the United States was willing to fight to save Hungary, according to the survey. How did so many come to believe that the West was ready to intervene? Other broadcasters, including the two fringe stations noted above, may have contributed to this belief. But it is also likely that RFE’s close association with the belief arose because RFE projected to Hungary the sympathy and moral and humanitarian support of the Western world. In the context of the revolution, this reporting— both accurate and journalistically responsible, with few exceptions—inadvertently became a source of false hope.

Hungarians were understandably encouraged and emboldened by the Western press reviews and correspondents’ reports that conveyed widespread sympathy for the revolution. The thrust of the broadcasts was solidarity with the revolution: for example, a report on “the unanimous, brave, and heroic strike of the workers” and a commentary that “we, a small people in numbers but a great nation, are fighting against the despotism of the Muscovites.” Such words could have been interpreted as encouraging resistance, not just morally and politically but in the streets. In one notorious case (the only one on record) an RFE commentator gave instructions for making a Molotov cocktail. Viewing RFE as an authoritative voice of the United States and the West, listeners could easily have concluded that not only was RFE closely allied with the revolutionaries but that somehow Hungary would not be abandoned to a Soviet fate.

Moreover, when the revolution broke out, broadcasting took on a highly emotional tone. The charge that RFE undermined Nagy by broadcasting personal attacks on him goes to the heart of RFE’s mission and performance. Both U.S. government and RFE policy guidelines for the treatment of Nagy indicated skepticism about him but directed a “wait and see” approach. Many Hungarian commentaries failed to observe such cautions. Programs could have offered critical but measured analyses of Nagy’s record, his sources of current support, and the choices ahead; instead, many were blanket condemnations of the leader of the fragile new government. These should not have been aired.

The U.S. government was caught off guard by the outbreak of revolution. RFE managers had long concluded that the chances for far-reaching political change in Eastern Europe were limited, and had calibrated their broadcasts to suggest gradual reforms within existing regimes—for the foreseeable future, liberalization and not liberation. Washington, though suspicious of Nagy, refrained from taking an official position on his leadership during what it saw as an unclear situation. At the same time, the United States, seeing a need to broadcast the views of non-communist political forces, authorized RFE to serve as a “communications center” for a welter of independent voices, some emanating from the often radical “Freedom Radios” (provincial radios throughout Hungary seized and operated by revolutionary forces) and demanding deep political change. The U.S. government encouraged RFE to relay the content, although not the actual broadcasts, of these local revolutionary stations to expand their audience reach.

RFE projected to Hungary the sympathy and moral and humanitarian support of the Western world. In the context of the revolution, this reporting—with few exceptions both accurate and journalistically responsible—inadvertently became a source of false hope.

Given the nature and pace of the revolution, it is hard to imagine that a different approach by RFE—active support of Nagy and active downplaying of popular demands for system change—could have helped bring about a Nagy-led government that the Kremlin could have tolerated. It was not, in any case, RFE’s function to offer such support to any Hungarian faction.

Even under the best of circumstances, the RFE Hungarian Service would have faced an enormous challenge in 1956. After the uprising, an RFE internal review concluded in reference to the often emotional tone of its broadcasting that “the chain of command within the [Hungarian] desk broke down, and discipline was not enforced.” American management at RFE Munich was found to have paid too little attention to the content of the Hungarian broadcasts during the crisis, in part because it erroneously assumed a common understanding of broadcast policy. It also lacked the monitoring and translation capabilities with which to discuss broadcasts beforehand, monitor them, and review them quickly. The overall problems were primarily blamed on the Hungarian Service director and his senior staff, who enjoyed great autonomy and trust and were assumed to be the best judges, within overall policy, of responsible and effective broadcasting. (In 1957, the Hungarian Service was reorganized and given a new director and deputy director; 12 other staff members were fired.) Ultimately, though, the breakdown of control was the responsibility of the U.S. managers who had hired the Hungarian directorate and failed to closely monitor its faulty broadcasts.

After the revolution collapsed, RFE remained a major source of information for Hungarians, reporting on the deportations of prominent revolutionaries and on United Nations and Red Cross relief. It also began daily programs of personal messages from refugees reporting their safe arrival in the West. Some 200,000 such messages were broadcast to relatives back in Hungary, a major public service.

RFE drew many lessons from 1956 that remain applicable to communications into crisis regions today. One is that broadcasters should report internal demands for greater freedom, democracy, and human rights while refusing to report calls for violence. Ultimately, too, the broadcaster must leave it to listeners to choose their own leaders and forms of governance.

Another is the broadcaster’s responsibility to provide, through sober analysis, a context for local developments, including the limits of external support. In Hungary, sophisticated commentaries could have indicated the unlikelihood of Western military intervention. A further hard lesson is the imperative to maintain editorial discipline, making good use of the talents of émigré broadcasters but ensuring that they do not presume to speak for their compatriots.

In the end, broadcasters also need to anticipate the inferences that a desperate audience may draw from even the most detached, sober reporting in times of crisis.

Available from the Hoover Press is Discovering the Hidden Listener: An Empirical Assessment of Radio Liberty and Western Broadcasting to the USSR During the Cold War, by R. Eugene Parta. To order, call 800.935.2882 or visit www.hooverpress.org.