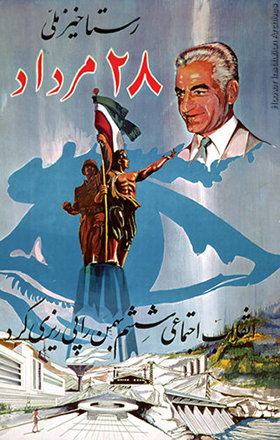 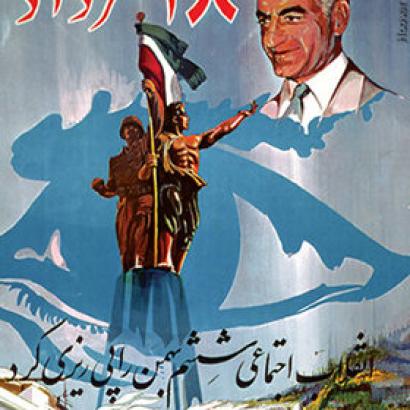 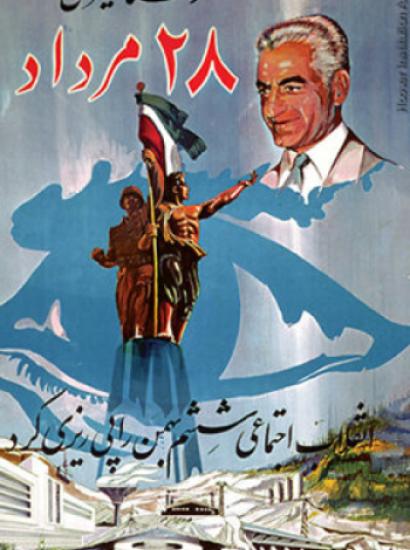 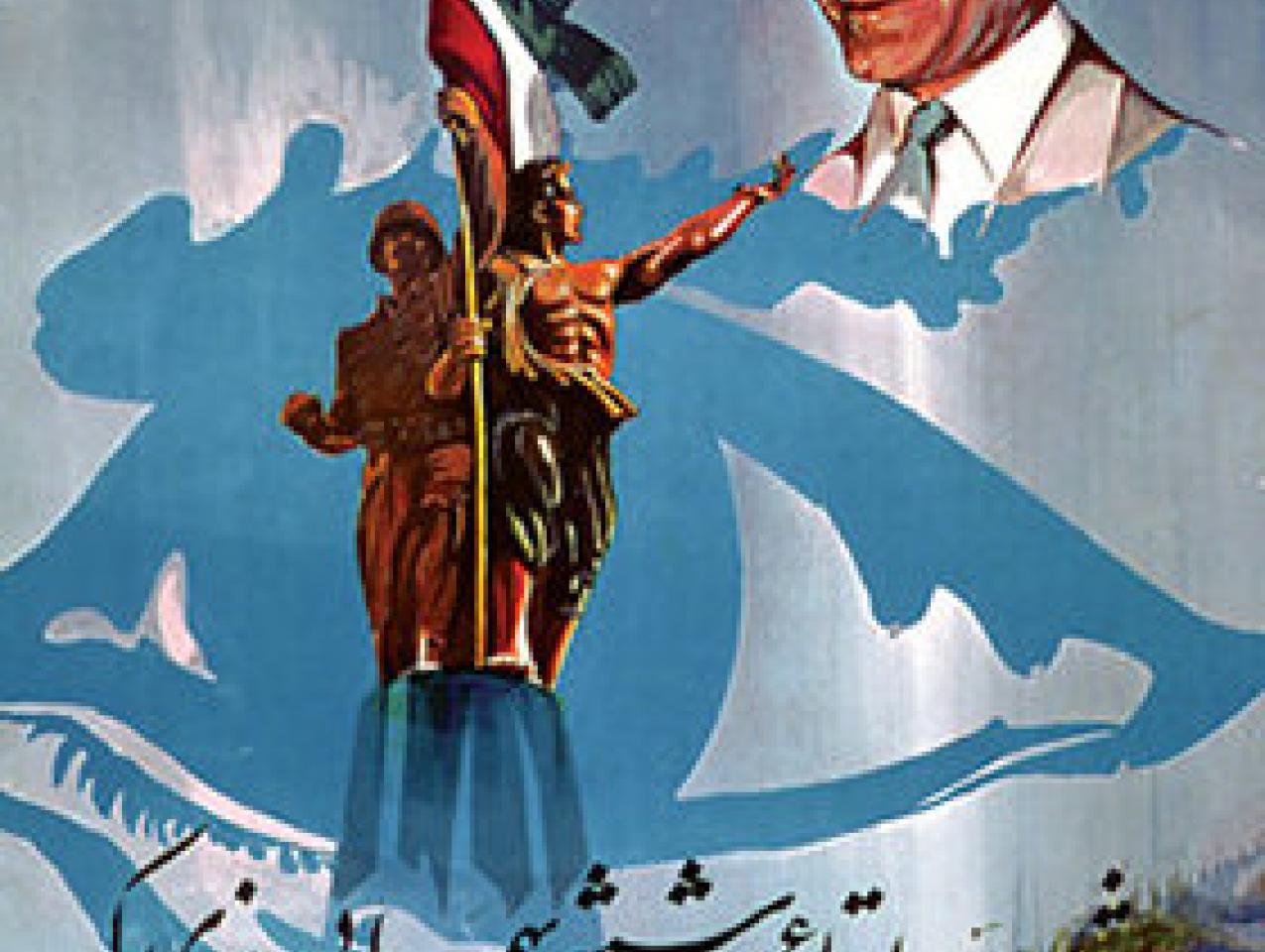 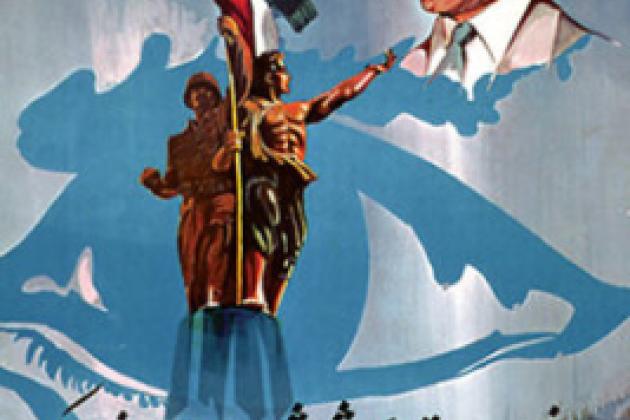 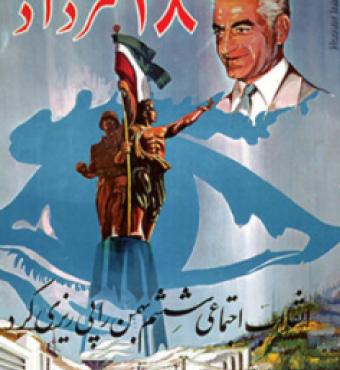 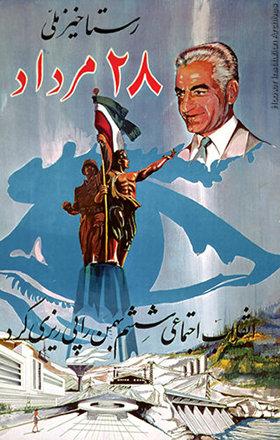 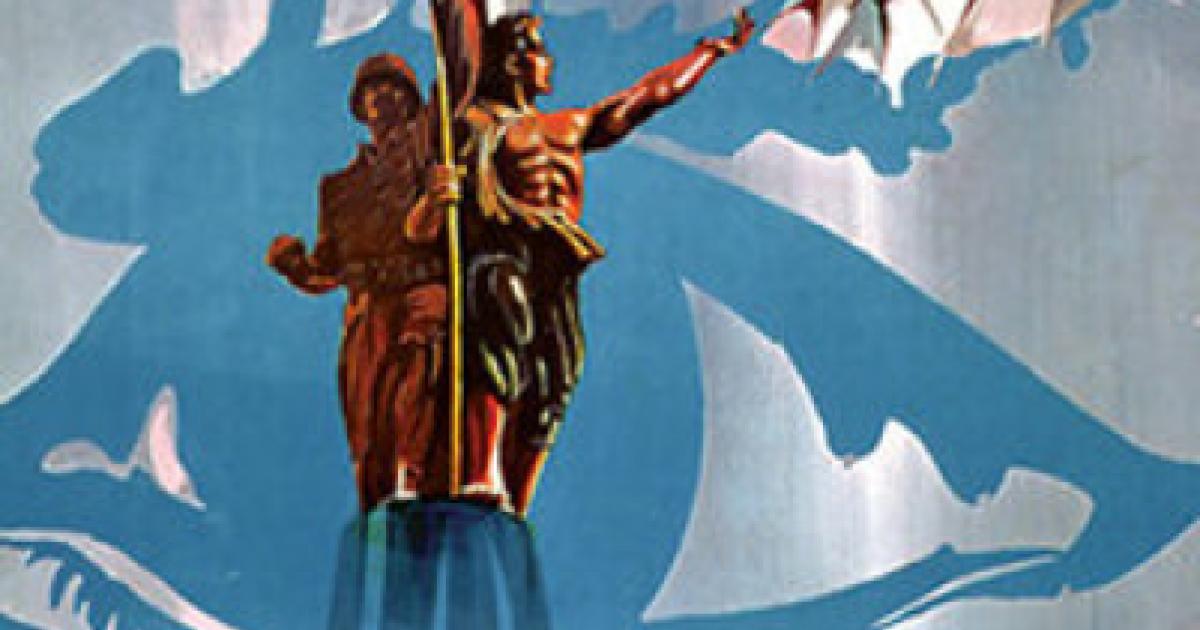 The revolution that swept Iran in 1978 and 1979 brought together various ideologies, from the far left to the far right, united in their opposition to the shah. Marxist, nationalist, and Islamic organizations fought for political supremacy. As militant supporters of the Ayatollah Khomeini appropriated the institutions of the state, they unleashed a massive propaganda campaign. Posters covered walls and buildings, re-creating the revolution’s ideology as a religious uprising and effectively neutralizing both nationalist and leftist organizations. With the help of these images (many actually taking their artistic technique if not message directly from a Marxist style), the revolution became Islamic.

The posters on the following pages come from the Hoover Institution Archives’ Iranian collections, which include more than 300 posters from this period. These posters trace the episodes leading up to the revolution and continue through the revolution’s early days and the successful creation of an Islamic government. Much of this material was collected by Edward A. Jajko, curator emeritus of the Hoover Library and Archives Middle East Collection.

Mohammed Reza Shah Pahlavi was restored to the throne on August 22, 1953, named by him National Resurrection Day. This marked the end of a five-day exile, during which time a U.S./British-staged coup removed Prime Minister Mohammed Mossadegh, the man responsible for the nationalization of the Anglo-Iranian Oil Company. In the White Revolution poster this date is linked to January 26, 1963, the date of the national referendum known as the White Revolution, which approved the shah’s program of reform and economic development, including land reform, women’s rights, and literacy programs. The resulting vision was the Great Civilization, shown in white. 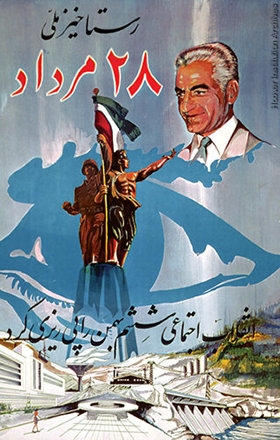 From outside the country, the monarchy looked well entrenched in 1977; however, all was not well within. Larger oil revenues increased income disparities and government corruption. The old system—a network of decentralized social relationships in which the local landlord had provided loans and mediated local disputes—had been transformed with the White Revolution. A bureaucracy replaced it, resulting in the alienation of the peasants from the state. A newly politicized clergy opposed the new women’s rights and was joined by the landlords in their objections to land reform. New government taxes affected the middle-class merchants. In addition, radical students espousing forms of Marxism, some combined with religious political rhetoric, joined the disaffected. Anti-government activities and the resulting arrests became common. 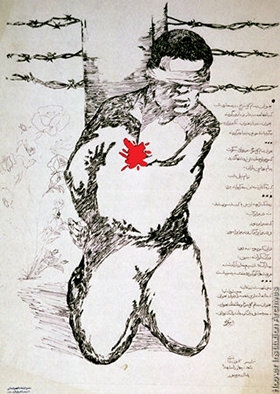 Opposition to the Shah

The well-known Marxist poet and writer Khosrow Golesorkhi was arrested for revolutionary activities. Offered the chance to recant his anti-government statements publicly on television, he instead condemned the shah’s regime in front of millions of viewers, saying, In the glorious name of the people, I will defend myself in a court whose legality nor legitimacy I do not recognize. . . . The more you hate my beliefs, the stronger the kindness and support of the people. Even if you bury me—and you certainly will—people will make flags and songs from my corpse. He was promptly executed.

A poem by contemporary poet Shafi-e Kadkani, currently teaching at the University of Tehran, begins with the words Read in the name of the red rose. The red rose is a play on Golesorkhi’s name, as red rose in Persian is golesorkh, also represented by the drawing of a rose. This poster was produced after the revolution in an attempt to posthumously co-opt the leftist heroes into the Islamic fold. 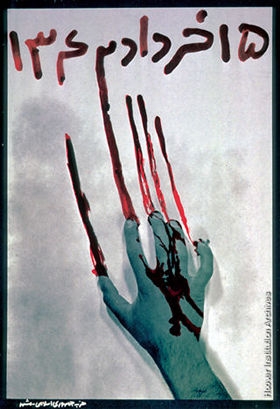 Writing on the Wall

The bloody hand commemorates the date—June 3, 1963—when Ayatollah Ruhollah Khomeini spoke out against the shah at the Fayziyeh Seminary in Qom. Khomeini chose the most important day in the Shiite calendar, the day commemorating the deaths of Hossein and 72 other martyrs on the fields of Karbala, AD 680, at the hands of the followers of the Sunni caliph Yazid. Khomeini was arrested, riots followed, and approximately one hundred demonstrators were killed by the security forces. Henceforth Khomeini made a conscious and systematic, almost relentless, attempt to identify his movement as Hosseini, which in Persian means following Hossein. 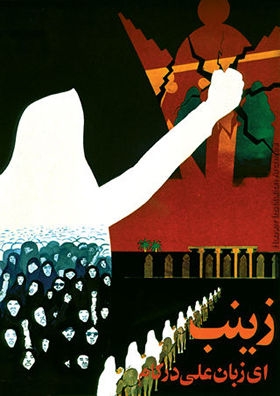 As with many Iranian posters, this one resurrects a symbolic event from the 7th century, familiar to all Shiites, and incorporates it into the current revolutionary narrative. The white female figure with raised fists is smashing the Pahlavi crown, symbol of the shah. Within her image, small women are shouting, fists also raised. The text and the additional images add another layer of meaning, as the white figure is identified as Zeinab, daughter of Ali, the first Shiite imam (religious leader) and sister of Hossein, the third imam. She is best known for her leadership role in keeping Hossein’s message alive after his death at the historic battle of Karbala between her brother and his small band of followers, who thought the mantle of leadership belonged to him, and the grand army of Yazid, who saw Yazid as the legitimate ruler. The line of women holding children and riding camels has been taken prisoner and is being driven to the palace of Caliph Yazid. The poster urges all Iranian women to emulate Zeinab’s leadership and speak out in times of crisis.

Oil and the Shah

The opposition to the shah focused upon various issues, many of which related to the huge oil revenues and the resulting changes they brought to Iranian society. Here the oil derrick becomes a dagger destroying the shah, shattering the Pahlavi crown. He is supported by a collar inscribed USA.

After the coup of 1953, the United States was frequently targeted by anti-shah activists as the enemy, although a poster image representing the United States, such as the flag or Uncle Sam, sometimes stood for the entire Western world, collectively labeled imperialists. When the American embassy was first occupied on February 14, 1979, the attempt was foiled by the Provisional government, which at that time enjoyed the qualified support of Khomeini. The second takeover of the American embassy in Tehran was in November of the same year. This time Khomeini saw the political value of the takeover: it facilitated the demise of the liberal-minded Provisional government, which he had come to hate; and it gave him credibility as the great anti-imperialist, unifying a fractious revolution against a single enemy. The result was that the revolution began to be defined by its antagonistic relationship with the United States. 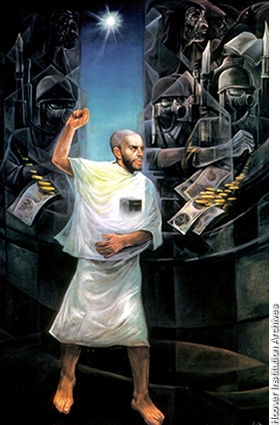 This Muslim pilgrim in white with the shrine of the Kaaba in his heart is stoning the demons, a ritual connected to the haj, or pilgrimage to Mecca. In this poster, however, the demons are Iraqi soldiers wearing gas masks, referring to the Iraqi use of chemical warfare during the Iran-Iraq war. The money held by these Iraqis is decorated with American eagles, symbolizing the support given the Iraqis by the West.

The posters in this article are from the Hoover Poster Collection, Hoover Institution Library and Archives. They can be seen in Creating an Islamic Republic: Iranian Collections from the Hoover Institution Library and Archives, an exhibit now open in the Herbert Hoover Memorial Exhibit Pavilion, which is located next to the Hoover Tower on the Stanford University campus. The exhibit will continue through December 19, 2003. Hoover research fellow Abbas Milani and library specialist Kavous Barghi served as valuable consultants for the research on these posters.