The Enemy of the Good

The recent Iraqi elections weren’t perfect, but they didn’t have to be. Democracy is emerging—and for now, that’s enough. By Fouad Ajami.

The Enemy of the Good

Forgive Vice President Joe Biden the audacity of hoping recently on Larry King Live that Iraq will be “one of the great achievements of this administration.” The larger point he made—that a representative government is taking hold in Baghdad—is on the mark.

The American project in Iraq has midwifed that rarest of creatures in the Greater Middle East: a government that emerges out of the consent of the governed. We should trust the Iraqis with their own history. That means letting their electoral process play out against the background of the Arab dynasties and autocracies, and of the Iranian theocracy next door that made a mockery out of its own national elections.

In a perfect world, the Iraqis would have left the past alone and avoided the ban that was imposed on some five hundred candidates accused of ties to the Baath Party. But this is a matter for the Iraqis themselves. In the twilight of the American regency, the United States can’t order Iraqi political life.

Sure, there were some candidates tainted with Baathism who should have been allowed to take part in spring’s round of elections. It would have been the better part of wisdom to let the Sunni parliamentarian Saleh al-Mutlaq participate. He is a gregarious man with natural political gifts, better inside the tent than outside. 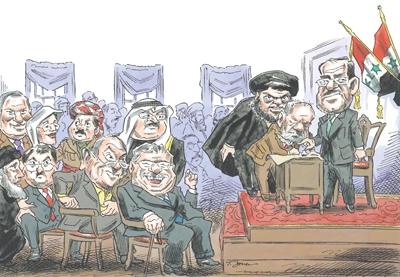 But then, too, de-Baathification has never been ably defended and explained to the American public. The idea has taken hold that de-Baathification was a matter of sectarian revenge: the newly ascendant Shiites striking back at their Sunni tormentors.

There was willfulness in this reading of de-Baathification. In the new Iraq, released by American power from its long nightmare, it was either de-Baathification or mass slaughter of yesterday’s tormentors. The American regency in Iraq made its share of blunders. But the order issued by proconsul Paul Bremer to ban the Baath was a boon to the new Iraq. On the whole, the hand of vengeance was stayed. It was remarkable how little violence was unleashed on those who had perpetrated on Iraqis a reign of the darkest terror.

Nor is it true that a sister republic of the Iranian theocracy is emerging in Baghdad, as some U.S. officials have suggested. This is a slur on Iraq and Iraqis, and on the vast Shiite majority.

In a perfect world, the Iraqis would have left the past alone and not banned all Baath contacts. But this is a matter for the Iraqis themselves.

So Iran has designs on Iraq. Well, what of it? A long border, the traffic of centuries in faith and commerce, runs between the two countries. But no Iraqi project in the offing contemplates making Iraq a satrap of the Persian state. The Iraqis are neither Lebanese seeking outside patronage nor Palestinians in need of money and guns from foreign donors. They are a tough breed, they have their own material means, oil aplenty, and a determination to keep their country whole and theirs.

If anything, that border with Iran concentrates the Iraqi mind. The Iraqis know their Persian neighbors. The kind of romance about Iran entertained in the Bekaa Valley and Greater Beirut, or in the Gaza Strip, has no takers in Iraq. The Shiism of Iraq is tenacious and Arab through and through.

The sacred geography of Shiism is in Iraq, and clerics in the holy city of Najaf, or in Kazimiyya on the outskirts of Baghdad, display no deference to the theology of Qom. I hazard to guess from discussions with many Shiite jurists in Iraq that no one of any consequence in the clerical hierarchy believes that Iran’s “supreme leader,” Ali Khamenei, is a scholar of genuine standing and religious authority.

Iraqis of all stripes are wary of Iran. In the provincial elections of 2009, pro-Iranian candidates were trounced and Iraqi nationalists carried the day.

There plays upon Iraqis the hope that their country can make its own way, defying the obituaries of doom written for their new order in neighboring lands and beyond. There is a transparent parliamentary culture in Iraq, and we for our part ought to be proud of what we have given birth to.

Leave it to the Egyptians and the Arabs of the Peninsula and the Persian Gulf to belittle the new order in Iraq. They threw everything at it but it managed to survive. Peace has not settled upon Baghdad, but this Iraq, even in its current condition, is a rebuke to the dynasties and the dictatorships of the Arab world.

There will be irregularities in Iraqi elections. Some votes are destined to be bought. But is the Egyptian regime of Hosni Mubarak, with the same man at the helm for three decades now, entitled to sit in judgment? The rulers around Iraq tax this Iraqi order with illegitimacy and dismiss it as a handmaiden of the Americans. But from one end of the Arab world to the other, countless regimes are in the orbit of the Pax Americana. Wily survivors, the Arab rulers frighten us with the scarecrow of a Shiite state in Baghdad.

So Iran has designs on Iraq. What of it? No Iraqi project in the offing contemplates making Iraq a satrap of the Persian state.

For decades, American policy makers have imbibed the Sunni orthodoxy of the Arab holders of power. That view seeped into the American official consciousness. It survived the terrors of 9/11 and the doctrines of the Sunni jihadists. America remained wedded to the idea of Shiite radicalism. Now a Shiite-led state in Baghdad could yet make its way into the American security structure in the region, and the Sunni rulers have taken up sword against it.

In the received wisdom of those who never took to the justice or the wisdom of the Iraq war, the balance of power in the region was upended by the destruction of the Saddam Hussein regime that had presumably served as a buffer against the Iranian theocracy.

But that view grieves for a golden era that never was. It was in the 1980s and the 1990s, when the tyranny of Saddam ran a regime of extortion and plunder in the region, that the Iranians made their way to the Mediterranean, formed and trained Hezbollah in Beirut and the Bekaa Valley, and installed their proxies in southern Lebanon on Israel’s northern border. It was in that fabled time that the Iranians spread mayhem all around and stoked the furies of the Sunni-Shiite schism that has poisoned the life of Islam.

There is a better way of “balancing” Iran: a regime in Baghdad endowed with the legitimacy of democratic norms. Of all that has been said about Iraq since the time that country became an American burden, nothing equals the stark formulation once offered by a diplomat not given to grandstanding and rhetorical flourishes. Said former ambassador Ryan Crocker: “In the end, what we leave behind and how we leave will be more important than how we came.”

We can already see the outline of what our labor has created: a representative government, a binational state of Arabs and Kurds, and a country that does not bend to the will of one man or one ruling clan.

This essay appeared in the Wall Street Journal on March 2, 2010. Reprinted with permission. ©2010 Dow Jones & Company. All rights reserved.

New from the Hoover Press is Saudi Arabia and the New Strategic Landscape, by Joshua Teitelbaum. To order, call 800.935.2882 or visit www.hooverpress.org.