A Fitting Gift For A Man Of Honor

Five years ago, a secret mission delivered a belated surprise for George P. Shultz—statesman, teacher, and US Marine. 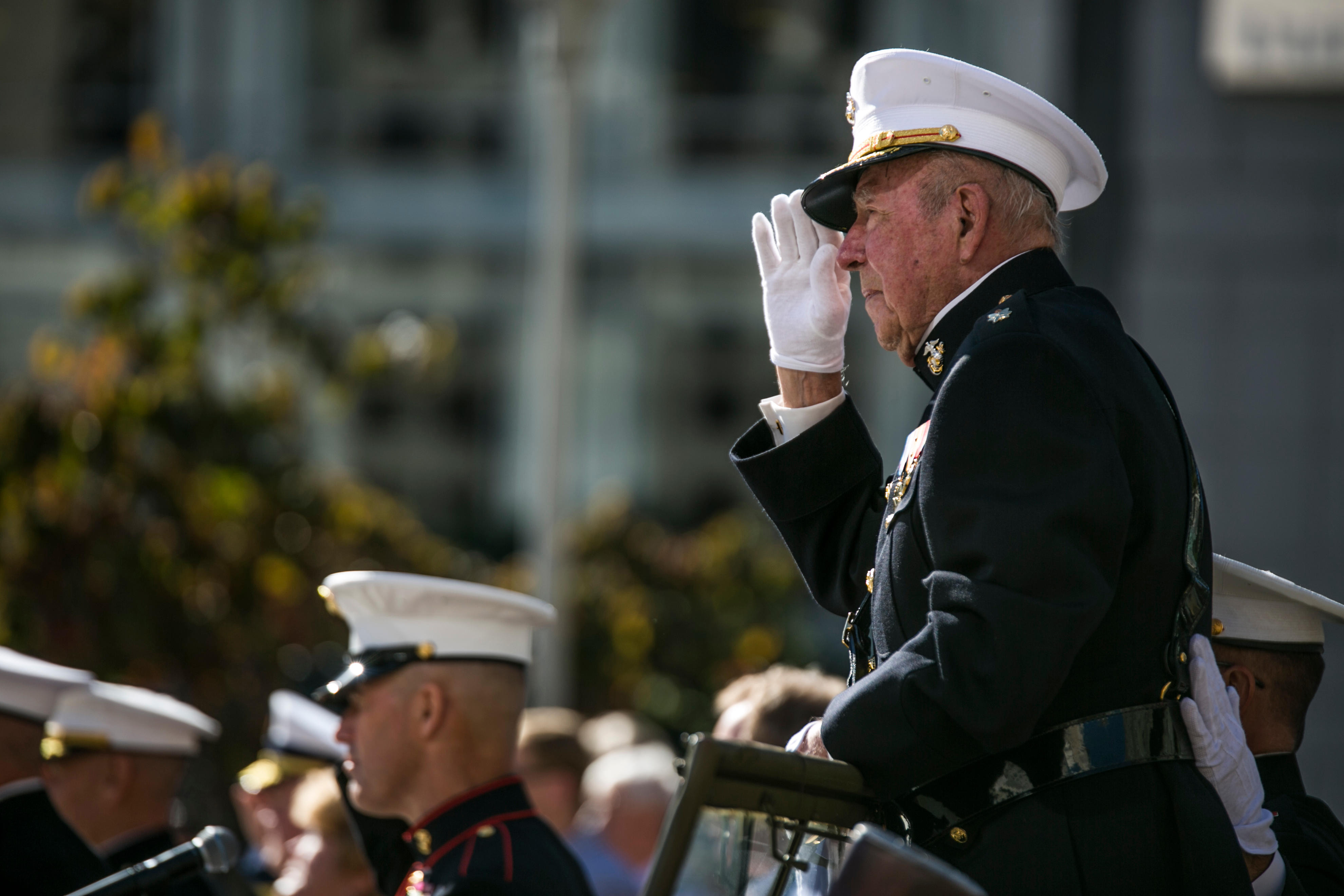 A Fitting Gift For A Man Of Honor 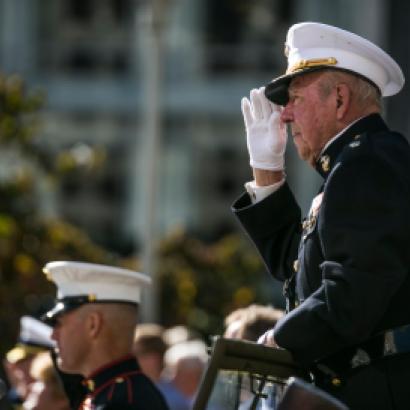 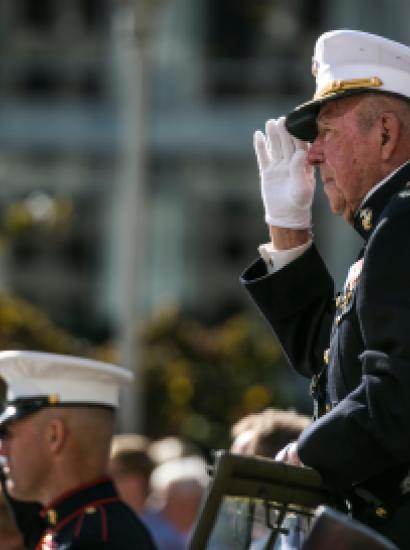 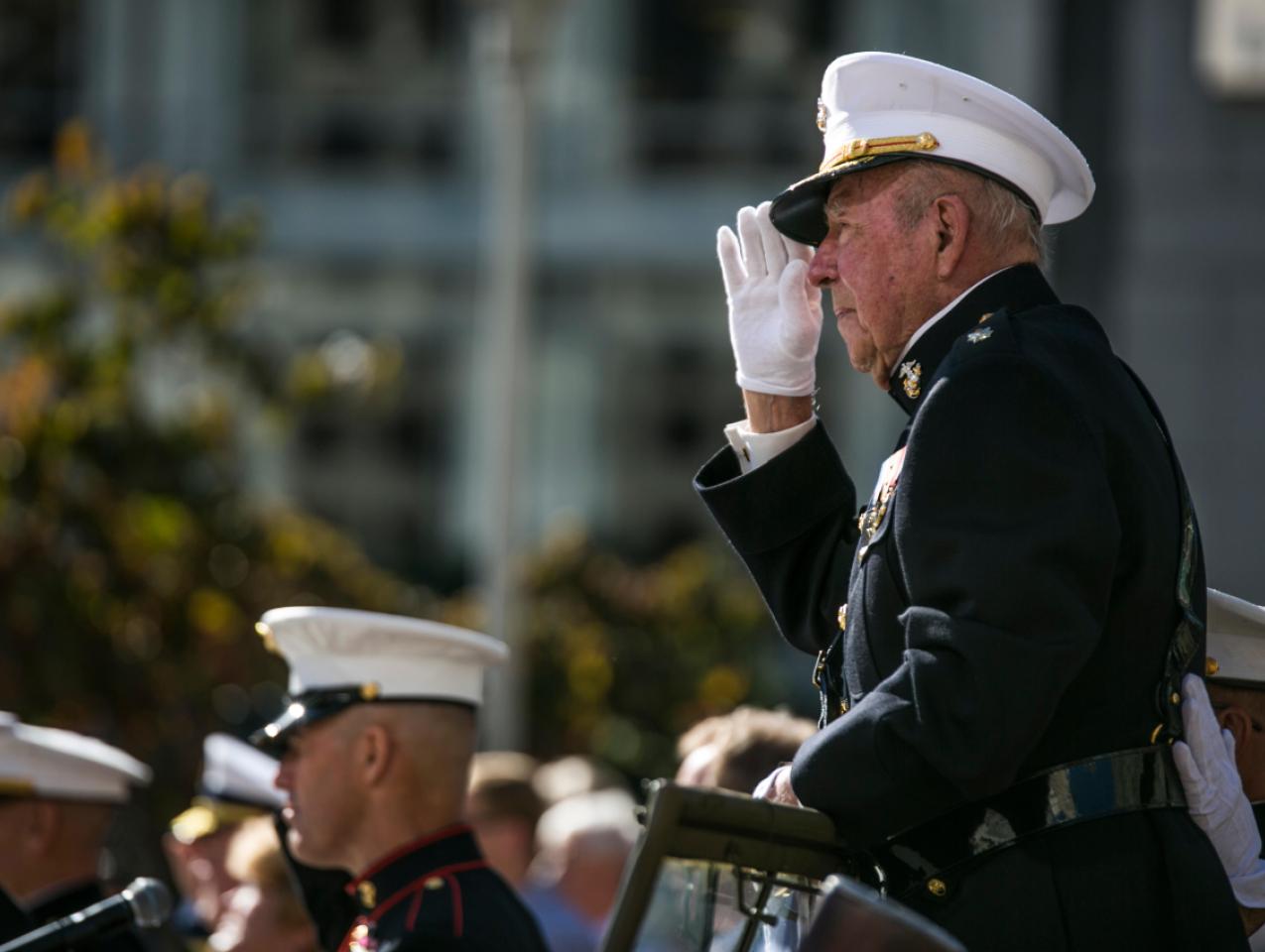 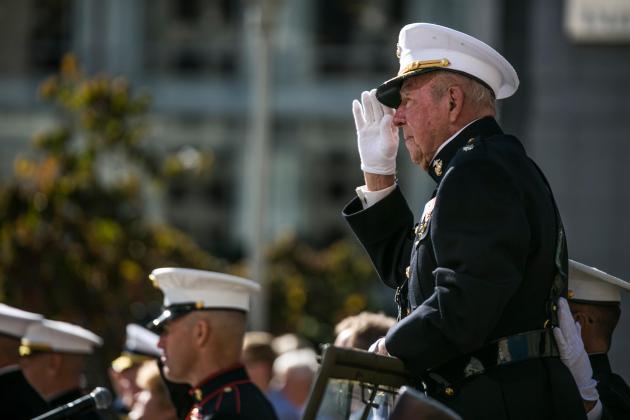 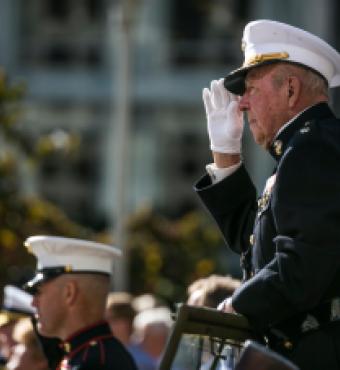 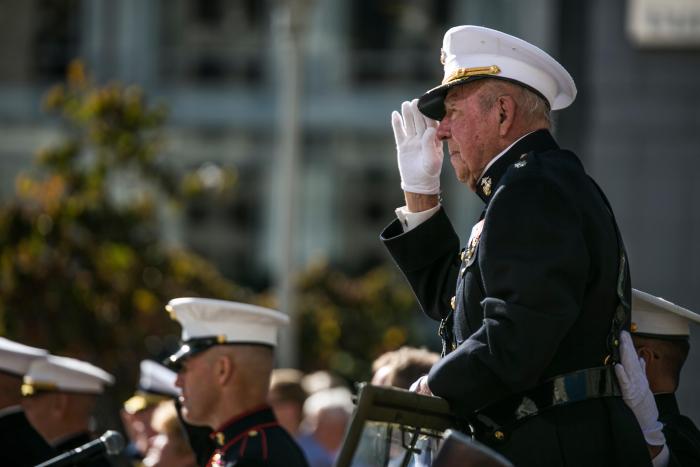 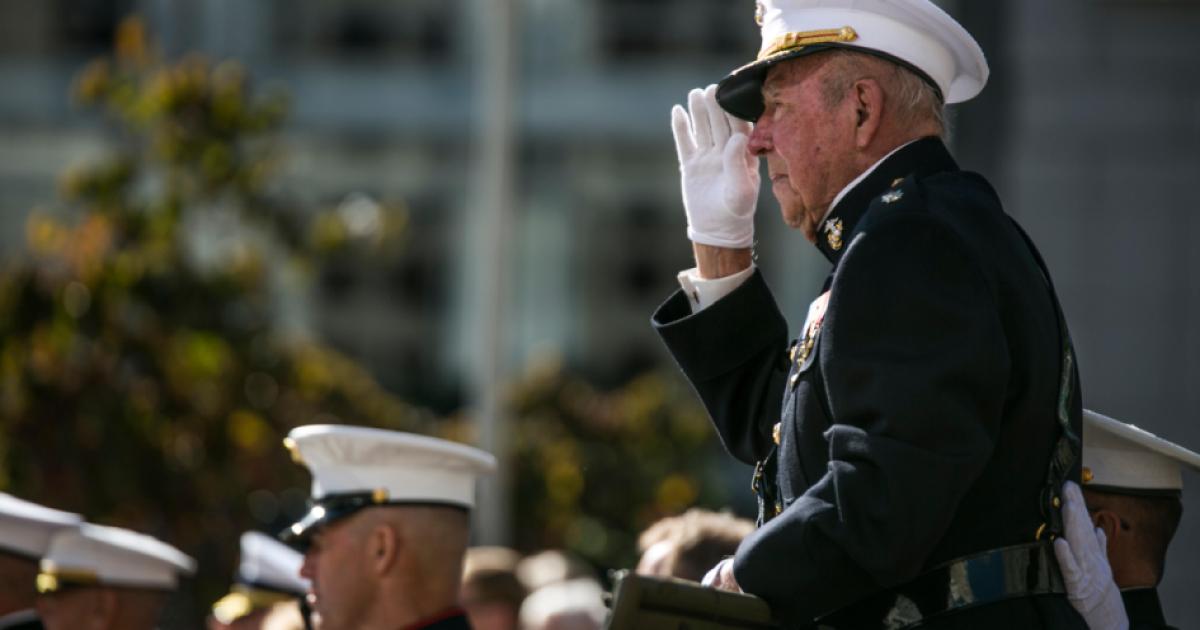 We lost a national treasure on 6 February 2021. Those of us privileged to know the Honorable George P. Shultz have lasting memories of him. I first met Secretary Shultz when I was a national security affairs fellow at the Hoover Institution. He loved teaching and sharing his wisdom. According to one story I heard about his time as secretary of state, he would meet every ambassador before they headed overseas. He would invite the ambassador to his office, where he kept a large globe, and when he asked the envoy to point to his or her country, each would fall into his trap. As they pointed to Burkina Faso or Finland, Secretary Shultz would move their finger, spin the globe, and point to the United States. “That’s your country,” he would say. He caught me off guard a few times, too, I have to admit. But I’m pleased to say there was one special occasion where a few of us successfully conspired to catch the Secretary himself off guard. It’s a story worth sharing.

Major George P. Shultz, USMCR (Ret.), was about to be ambushed. No, the year was not 1942 and the location was not the Pacific theater of World War II. That was seventy-three years in the past. This ambush was being laid at San Francisco International Airport. The Honorable George P. Shultz had chosen a significant day to return home from a trip to Washington. November 10, 2015, was the 240th birthday of the United States Marine Corps. All across the globe, Marines pause on that day to conduct a formal cake-cutting ceremony, share camaraderie, and reflect on those who went before.

Colonel Tom Prentice was making final preparations, directing a detachment of Marines clad in dress blue. As the commanding officer of 23d Marines, he had been tipped off to the details of Secretary Shultz’s travel schedule by Major General Mike Myatt, USMC (Ret.), then-president and CEO of the Marines’ Memorial Club. Colors, cake, beverages, script for the ceremony, all was in order.

The captain’s voice came over the loudspeaker: “Ladies and gentlemen, I’m going to ask you to remain in your seats as we allow a special guest to deplane first this afternoon.” Before anyone knew what was happening, Colonel Prentice had approached Secretary Shultz and escorted him off the plane to a private space in the terminal. There, the traditional reading of the commandant’s message, cake cutting, and singing of the “Marines’ Hymn” ensued. When the formalities ended, Secretary Shultz held school—bootcamp wisdom. He shared the story of being issued his M1 rifle at bootcamp and rule number one from his drill instructor: don’t point your rifle at anything you don’t intend to kill. No empty threats—a lesson he never forgot and later shared with President Reagan.

Secretary Shultz shook hands with every Marine present. Then, as he started to leave for home, he paused. “You gentlemen look sharp in your dress blues,” he remarked. “You know, I never got my dress blue uniform. In World War II, I was issued only camouflage utilities and greens.” (Greens refers to the olive-colored Marine Summer Service Alpha uniform—military for business attire.) As the guest of honor left the airport, Major General Myatt issued a mission order.

“We need to get Secretary Shultz his dress blues!”

Mission orders are simple. Marines love mission orders because they tell you what to do but not how to do it. That night I scribbled a project outline on a notepad. In the margin, I started a list of people whose help we’d need. We would have to find out the Secretary’s measurements. We needed his military records to know his awards and decorations. We would need a venue. We would need to inform Headquarters Marine Corps in Washington and ask the Marine Commandant to write a letter.

George Pratt Shultz was born on 13 December 1920 in New York City. He served on active duty in the Marines from 1942 to 1945. As an artillery officer, he saw action in the Pacific, including the battles for Tarawa and Peleliu. After the war, he remained an officer in the Marine Corps Reserve for eight years, finally leaving military service as a major.

Secretary Shultz was ninety-four years old when he remarked that he had never received his dress blue uniform. His ninety-fifth birthday was fast approaching. What a perfect opportunity to publicly rectify an oversight from 1942. One month to recreate a uniform that was never issued? No problem. Our first trusted agent had to be the Secretary’s wife, Charlotte. She was read into the plan before anyone else, and she loved the idea. With timing and venue set, it was on to the next task.

A person’s clothing measurements can be like a Social Security number or e-mail password: a bit personal. So how do we get them? I knew Secretary Shultz was a friend of renowned clothier Wilkes Bashford. A wonderful man and an iconic figure for decades in San Francisco, Wilkes had fitted the Secretary for a suit or two, so he became the second trusted agent read into the plan. He was delighted, embracing the plan as if it were his own. A few privacy regulations violated, perhaps . . . but with no arm twisting, the measurements of one George P. Shultz were delivered via the phone. E-mail was a no-go. Matters such as these are best done telephonically so as not to leave a paper trail. Wilkes offered to custom tailor the garments once they were delivered from the manufacturer on the East Coast. Most important, we agreed to the highly classified nature of this project. Loose lips sink ships and ruin birthday parties.

With the information from Wilkes, we contacted the Marine Shop in Quantico, Virginia, and placed the order. Dress Blue Coat, Dress Blue Trousers, White Dress Shirt, Khaki Belt and Buckle, Cuff Links, Sam Browne Belt, Collar Strip, Gold Oak Leaves, White Gloves, and Field Grade Cover. For black socks and shoes, the honoree would be on his own.

From Secretary Shultz’s military record, also obtained through undisclosed sources, we were able to list the medals and ribbons authorized for wear. The Living Memorial Director at the Marines’ Memorial Club requisitioned exact replica medals and expedited their delivery. It was coming together.

The next day I contacted Headquarters, Marine Corps, to request a letter from the Commandant of the Marine Corps to Major Shultz, USMCR. In my time at the Pentagon, I had met the Commandant’s secretary. It’s important to know that generals come and go at the Pentagon, but the civil servants who work in their front offices, and who know everything, remain. They’re the single best source of intelligence in the puzzle palace. With the help of the Commandant’s secretary, we expedited this piece of correspondence. Within a fortnight, a letter from the Commandant, General Robert B. Neller, had been signed and sent to San Francisco.

On 10 December 2015, three days before the big event, I went to retrieve the uniform from Wilkes Bashford. He and his tailoring staff were justly proud of their work. Final cuts and hems were complete, and the uniform had been placed on a mannequin. For security, we placed a garment bag over the entire ensemble. I thanked Wilkes profusely.  It was the last time I saw the famous clothier, who succumbed to cancer only six weeks later.

My main co-conspirator in the birthday jinks was a gentleman named Ed Flowers, a veteran of the Marines and the San Francisco Sheriff’s Department and a persistent force for good in the world. As we emerged from the Wilkes Bashford store on Sutter Street with what looked like a human body wrapped in burlap, we attracted a bit more attention than we intended. Under the gaze of onlookers who had probably all seen Weekend at Bernie’s, we struggled to unlock Ed’s car and ungracefully jammed the mannequin into the back seat and took off in a hurry. Destination: safe house, to complete assembly and inspection of the final product.

The Sam Browne Belt, with its shoulder strap threaded through the shoulder epaulet, was buckled into place. Devices, insignia, and medals were carefully placed to comply with strict Marine Corps uniform regulations. Thanks to Ed, the letter from the Commandant of the Marine Corps had been expertly matted and framed.

Everyone knows that when Charlotte Shultz throws a party it will be original, exquisite, and memorable. Her husband’s ninety-fifth on 13 December 2015 was no exception. The theme was golf, a game the Secretary enjoyed well into his nineties. Each guest received a gift bag with chocolate and commemorative golf balls. Light and dark blue balloons made a sky out of the ceiling. A large banner read “95 is the new 72.” Or, as golfers would say, “95 is the new par for life.”

Ed Flowers and I arrived at the Shultz residence an hour early. A detachment from the 23rd Marines also arrived; they would actually present the uniform. We also enlisted the services of a Marine musician to play the “Marines’ Hymn” on the trumpet. There was barely time for a single, rudimentary rehearsal. Fortunately, Marines realize that detailed planning and rehearsals are overrated. How you execute is what counts.

The space filled quickly. The guests included senators and San Francisco’s mayor, Ed Lee. Just as the dining and entertainment, capped by Beach Blanket Babylon show tunes, seemed to be winding down, a lone trumpet sounded from atop a spiral staircase. Secretary Shultz was the first to his feet. Marines instinctively stand at attention when their hymn is played. Every guest followed suit and stood for the playing of the “Marines’ Hymn.” Two Marines in dress blues then marched to the stage and unveiled the final gift of the night.

Colonel Prentice, who had escorted the Secretary off the plane a month before, made the official presentation and read aloud the Commandant’s letter. Then Secretary Shultz took the stage. He touched the fabric, acknowledging the medals he had earned. He told his guests about the special calling and the making of a Marine.

In his letter, General Neller expressed gratitude for the Secretary’s “years of leadership and diplomacy” and his contributions to “decades of peace and prosperity.” He also recalled Major Shultz to duty in the Inactive Reserve, noting approvingly that he was “still in compliance with our stringent height and weight standards and have maintained your personal fitness and rifle marksmanship.”

“Knowing your seabag is packed and that you are ready to ship out on short notice,” the Commandant’s letter concluded, “makes all of us here at Headquarters Marine Corps sleep a bit easier.”

This uniform was not going to hang in a closet or be a decoration. The sacred cloth was meant to be worn. After his ninety-fifth birthday, Secretary Shultz wore his uniform to numerous functions, including appearances at a Fleet Week Tribute to Marine Forces Reserve in 2016 and as the guest of honor at the Marine Corps Birthday Ball in San Francisco in 2018.

George P. Shultz continued to contribute to critical issues of the day even past the century mark. To the end, he was a prolific writer and found ways to serve the nation while educating and inspiring practitioners and students of all generations. The cornerstone of his philosophy and attitude toward life, he would always tell you, is to never give up. Always be engaged. Always be working on something important and worthwhile.

Semper Fi, Marine, and carry on.

Former Secretary of State George P. Shultz, who served as a Marine in the Pacific theater during World War II, salutes the American flag as the honorary officer of the day at a ceremony held at Union Square, San Francisco, on October. 8, 2016.
Additional resources