A financial crisis is the worst time to change the foundations of American capitalism.

It's hard not to see the continued sell-off on Wall Street and the growing fear on Main Street as a product, at least in part, of the realization that our new president's policies are designed to radically re-engineer the market-based U.S. economy, not just mitigate the recession and financial crisis. 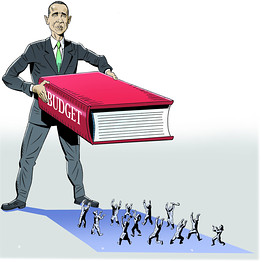 The illusion that Barack Obama will lead from the economic center has quickly come to an end. Instead of combining the best policies of past Democratic presidents -- John Kennedy on taxes, Bill Clinton on welfare reform and a balanced budget, for instance -- President Obama is returning to Jimmy Carter's higher taxes and Mr. Clinton's draconian defense drawdown.

Mr. Obama's $3.6 trillion budget blueprint, by his own admission, redefines the role of government in our economy and society. The budget more than doubles the national debt held by the public, adding more to the debt than all previous presidents -- from George Washington to George W. Bush -- combined. It reduces defense spending to a level not sustained since the dangerous days before World War II, while increasing nondefense spending (relative to GDP) to the highest level in U.S. history. And it would raise taxes to historically high levels (again, relative to GDP). And all of this beforeaddressing the impending explosion in Social Security and Medicare costs.

To be fair, specific parts of the president's budget are admirable and deserve support: increased means-testing in agriculture and medical payments; permanent indexing of the alternative minimum tax and other tax reductions; recognizing the need for further financial rescue and likely losses thereon; and bringing spending into the budget that was previously in supplemental appropriations, such as funding for the wars in Iraq and Afghanistan.

The specific problems, however, far outweigh the positives. First are the quite optimistic forecasts, despite the higher taxes and government micromanagement that will harm the economy. The budget projects a much shallower recession and stronger recovery than private forecasters or the nonpartisan Congressional Budget Office are projecting. It implies a vast amount of additional spending and higher taxes, above and beyond even these record levels. For example, it calls for a down payment on universal health care, with the additional "resources" needed "TBD" (to be determined).

Mr. Obama has bravely said he will deal with the projected deficits in Medicare and Social Security. While reform of these programs is vital, the president has shown little interest in reining in the growth of real spending per beneficiary, and he has rejected increasing the retirement age. Instead, he's proposed additional taxes on earnings above the current payroll tax cap of $106,800 -- a bad policy that would raise marginal tax rates still further and barely dent the long-run deficit.

Increasing the top tax rates on earnings to 39.6% and on capital gains and dividends to 20% will reduce incentives for our most productive citizens and small businesses to work, save and invest -- with effective rates higher still because of restrictions on itemized deductions and raising the Social Security cap. As every economics student learns, high marginal rates distort economic decisions, the damage from which rises with the square of the rates (doubling the rates quadruples the harm). The president claims he is only hitting 2% of the population, but many more will at some point be in these brackets.

As for energy policy, the president's cap-and-trade plan for CO2 would ensnare a vast network of covered sources, opening up countless opportunities for political manipulation, bureaucracy, or worse. It would likely exacerbate volatility in energy prices, as permit prices soar in booms and collapse in busts. The European emissions trading system has been a dismal failure. A direct, transparent carbon tax would be far better.

Moreover, the president's energy proposals radically underestimate the time frame for bringing alternatives plausibly to scale. His own Energy Department estimates we will need a lot more oil and gas in the meantime, necessitating $11 trillion in capital investment to avoid permanently higher prices.

The president proposes a large defense drawdown to pay for exploding nondefense outlays -- similar to those of Presidents Carter and Clinton -- which were widely perceived by both Republicans and Democrats as having gone too far, leaving large holes in our military. We paid a high price for those mistakes and should not repeat them.

The president's proposed limitations on the value of itemized deductions for those in the top tax brackets would clobber itemized charitable contributions, half of which are by those at the top. This change effectively increases the cost to the donor by roughly 20% (to just over 72 cents from 60 cents per dollar donated). Estimates of the responsiveness of giving to after-tax prices range from a bit above to a little below proportionate, so reductions in giving will be large and permanent, even after the recession ends and the financial markets rebound.

A similar effect will exacerbate tax flight from states like California and New York, which rely on steeply progressive income taxes collecting a large fraction of revenue from a small fraction of their residents. This attack on decentralization permeates the budget -- e.g., killing the private fee-for-service Medicare option -- and will curtail the experimentation, innovation and competition that provide a road map to greater effectiveness.

The pervasive government subsidies and mandates -- in health, pharmaceuticals, energy and the like -- will do a poor job of picking winners and losers (ask the Japanese or Europeans) and will be difficult to unwind as recipients lobby for continuation and expansion. Expanding the scale and scope of government largess means that more and more of our best entrepreneurs, managers and workers will spend their time and talent chasing handouts subject to bureaucratic diktats, not the marketplace needs and wants of consumers.

Our competitors have lower corporate tax rates and tax only domestic earnings, yet the budget seeks to restrict deferral of taxes on overseas earnings, arguing it drives jobs overseas. But the academic research (most notably by Mihir Desai, C. Fritz Foley and James Hines Jr.) reveals the opposite: American firms' overseas investments strengthen their domestic operations and employee compensation.

New and expanded refundable tax credits would raise the fraction of taxpayers paying no income taxes to almost 50% from 38%. This is potentially the most pernicious feature of the president's budget, because it would cement a permanent voting majority with no stake in controlling the cost of general government.

Unfortunately, our history suggests new government programs, however noble the intent, more often wind up delivering less, more slowly, at far higher cost than projected, with potentially damaging unintended consequences. The most recent case, of course, was the government's meddling in the housing market to bring home ownership to low-income families, which became a prime cause of the current economic and financial disaster.

On the growth effects of a large expansion of government, the European social welfare states present a window on our potential future: standards of living permanently 30% lower than ours. Rounding off perceived rough edges of our economic system may well be called for, but a major, perhaps irreversible, step toward a European-style social welfare state with its concomitant long-run economic stagnation is not.