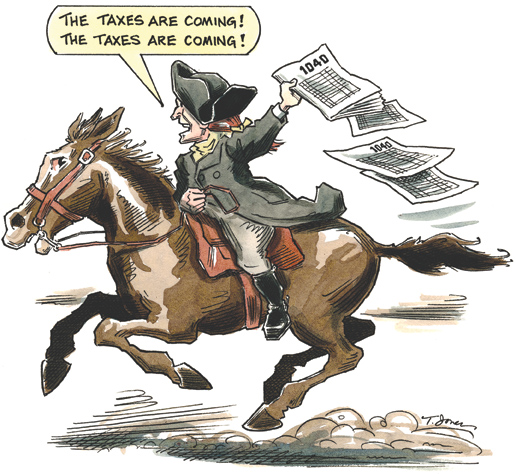 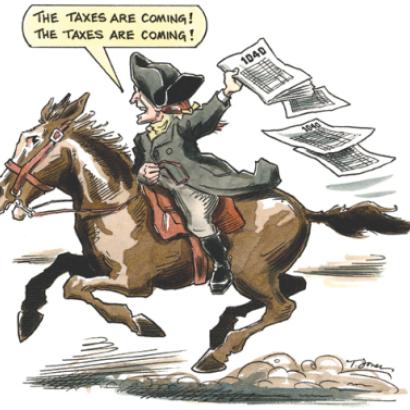 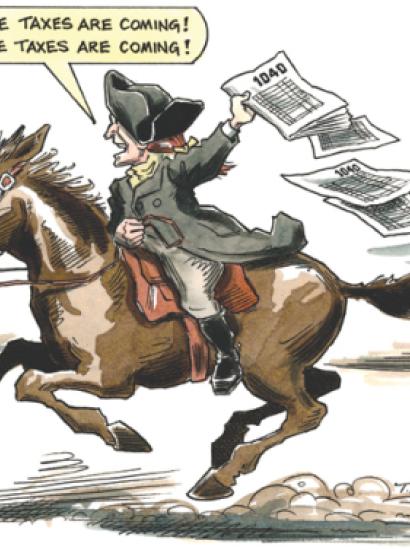 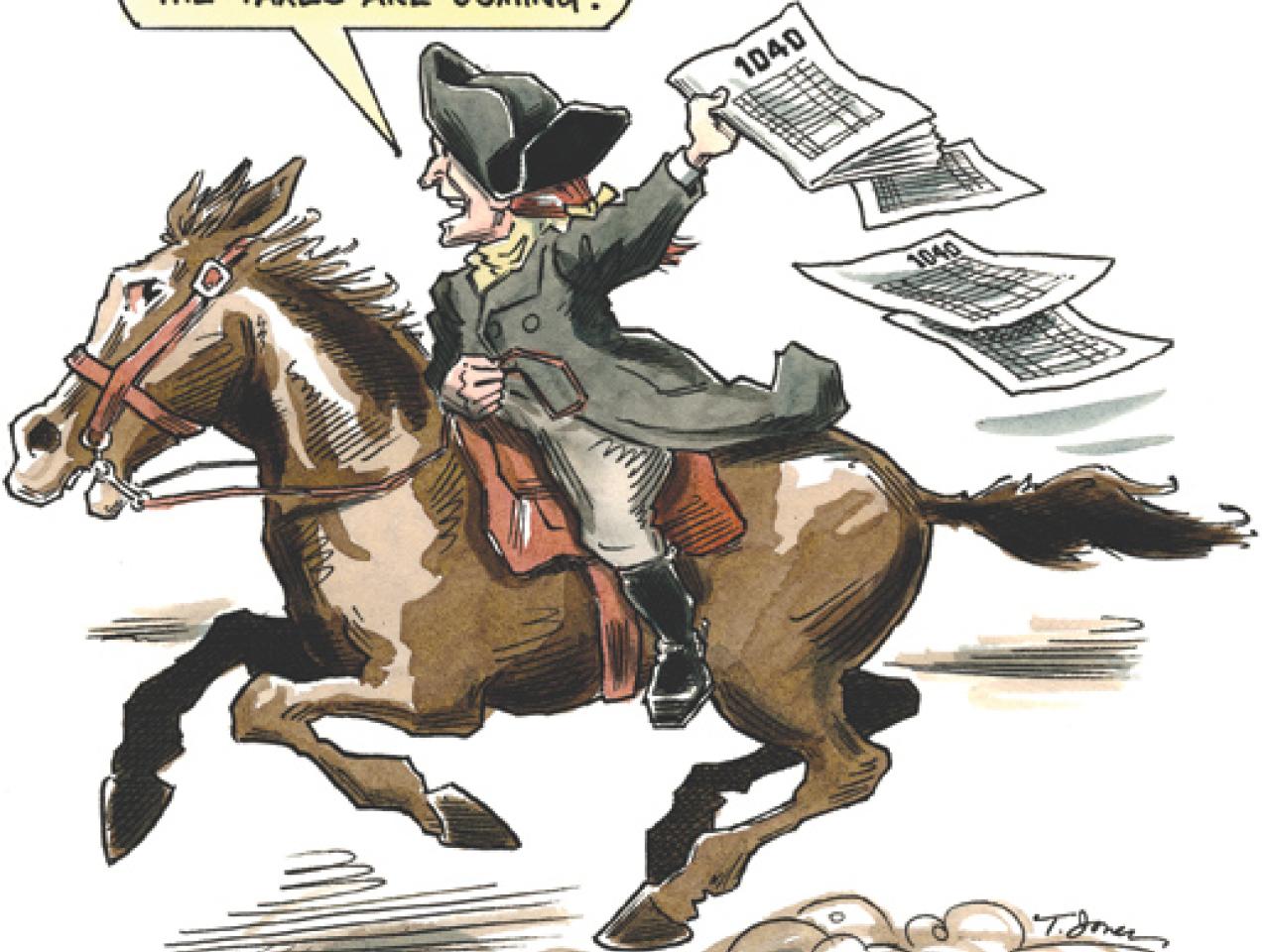 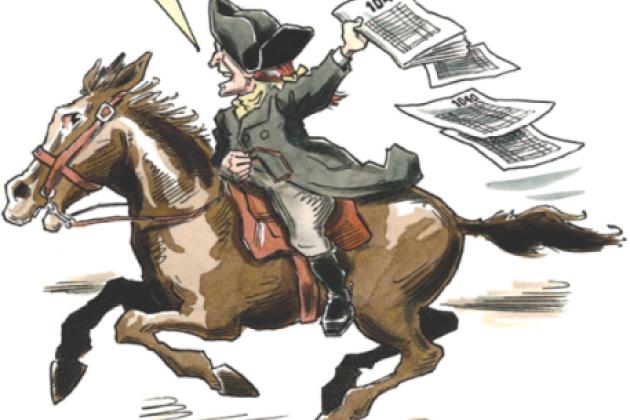 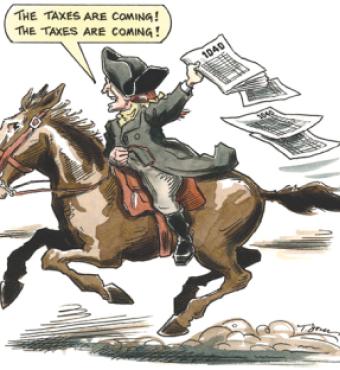 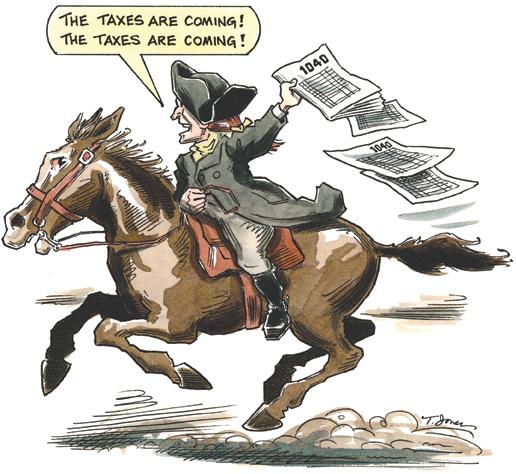 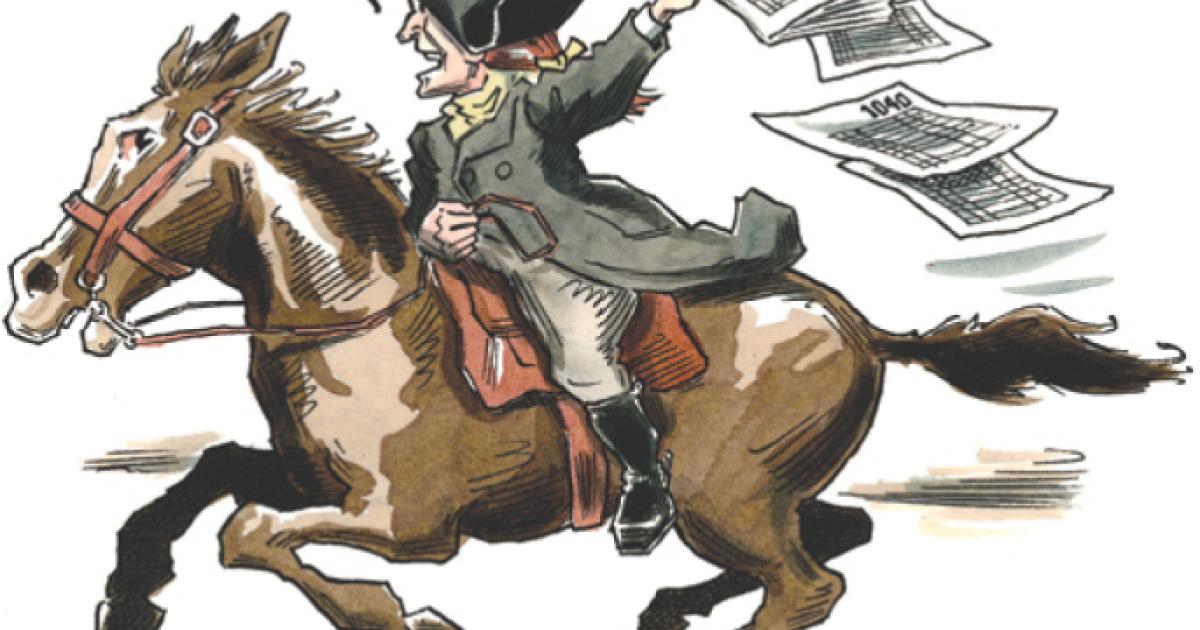 From the first settlement at Jamestown to the midnight ride of Paul Revere, the British colonies in North America grew from a few hundred adventurous souls, most of whom failed to survive the first winter in the New World, to nearly 2 million free colonists whose leaders chose to rebel against the strongest military power in the world. Many British subjects must have sensed a promising future in the New World. Despite the prospect of civil war between Britons and Americans, the largest migration from the British Isles to the American colonies during any five-year period of the colonial era occurred in 1771–75.

The millennial edition of Historical Statistics of the United States: Earliest Times to the Present includes a survey by John J. McCusker on the story of the American colonies revealed in the numbers on economic growth, income and wealth distribution, agricultural activity, capital, and expansion. In his review of scholarly research, McCusker states that the economy of the thirteen colonies grew at the fastest rate of all known contemporary economies, affording its citizens the highest standard of living in the world (on average) on the eve of the Revolution. The long-term rate of growth of colonial America, although slow by modern standards and experiencing some thirty short-term cycles of expansion and contraction, exceeded, perhaps doubled, that of Great Britain. Even the poorest colonists enjoyed a steady rise in their standard of living. Colonial families married earlier and had more children than did their British counterparts.

Of the 2,360,000 inhabitants of the thirteen colonies in 1775, only 97,500, a mere 4 percent, lived in the principal port cities of Boston, Newport, New York, Philadelphia, and Charleston. An additional 15 percent resided in communities numbering up to a few thousand people. The remaining four-fifths were engaged principally in agriculture.

Agriculture was the dominant factor in the economy. Apart from domestic consumption, it provided numerous commodities for export, such as tobacco, wheat, corn, timber, rice, indigo, livestock, animal foodstuffs, and rum. Agricultural commodities fostered the development of grain and lumber mills. The growth of commerce was reflected in shipbuilding and investment in colonial cargoes that carried colonial products to Europe, Africa, and the Caribbean. Clearances and tonnage of vessels from colonial ports rose substantially during the third quarter of the eighteenth century. 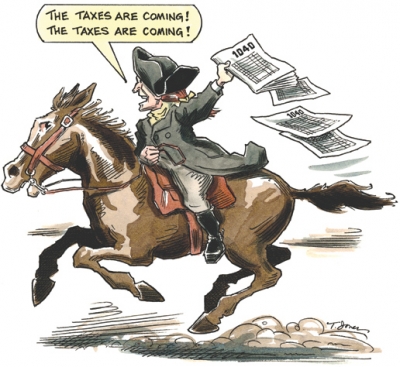 The supply of domestic investment capital, which was augmented with credit from British merchants, grew at an annual estimated rate of 1.6 percent between 1730 and 1770, a full percentage point faster than the 0.6 percent annual growth rate of the economy during the same years. Capital underwrote manufacturing and trade and the acquisition of land for the children of colonial farmers setting out on their own.

The franchise was limited to white, free, adult males, qualified to vote on the basis of property or the amount of taxes they paid. Representatives elected to lower houses of colonial legislatures carefully deliberated every farthing raised in taxes and carefully examined every farthing approved for spending. By the mid-eighteenth century, the lower houses were largely in charge of the public finances in most of the colonies. Royal governors and their aides depended on elected assemblies for appropriations for their salaries, rent, and other provincial expenses.

The long-term rate of growth of colonial America, although slow by modern standards, exceeded, and perhaps doubled, that of Great Britain. Even the poorest colonists enjoyed a steady rise in their standard of living.

The Boston Tea Party is perhaps the most famous event preceding the American Revolution, symbolizing a refusal to pay a tax on tea. A mere three pence on the pound, the tax pales against modern levels of taxation, but it was not minuscule in the light of provincial taxes paid in peacetime in the colonies. The Americans endured only three episodes of heavy taxes in the colonial era, which took place during the Pequot and King William’s wars in the last quarter of the seventeenth century, Queen Anne’s War of 1702–13, and the two-decade-long war that began with Spain in 1740 and ended with the French surrender in Quebec in 1760.

The Swedish botanist Pehr Kahn, who visited the colonies in 1750, recorded the following: “There is such an amount of good land yet uncultivated that a newly married man can, without difficulty, get a spot of ground where he may comfortably subsist with his wife and children. The taxes are very low, and he need not be under any concern on their account. The liberties he enjoys are so great that he considers himself a prince in his possessions” (emphasis added).

The colonists were inventive. British law banned the minting of coins and the issue of official government money in America. To circumvent this restriction, the colonies issued quasi-official paper money, called “bills of public credit,” which fell outside the legal definition of official money. Bills of credit were backed with pledges of taxation to ensure their redemption or were loaned to individuals to secure land and property. Loan office bills generated enough interest in several of the colonies in the first half of the eighteenth century that no direct taxes were levied for up to thirty-eight years in Rhode Island, Pennsylvania, Delaware, and New Jersey and helped keep taxes low in New York and other colonies. To halt the issue of new paper money in the colonies, Parliament passed the Currency Acts of 1751 and 1764. Many colonial assemblies continued to issue, in one form or another, non-legal-tender paper money that was accepted in payment of taxes and between private merchants, thus limiting the need for postwar tax levies. Between 1770 and April 1775, every colony reduced its tax levies, some to the point of enacting no new taxes.

The situation in the colonies was in marked contrast to that in Great Britain. British tax burdens were ten or more times heavier than those in the colonies. Whereas the colonists had largely cleared their public debts, British national debt reached record levels, meaning heavy taxes for years to come. To reduce the burden on Britons, especially the cost of maintaining British troops in America to prevent uprisings among the defeated French and Indian tribes, a succession of British administrations set out to levy an American tax. Of these, the Sugar Act of 1764, which lowered duty to the customary rate of bribery, produced considerable revenue in the decade preceding the Revolution. The Stamp and Townshend acts, in contrast, failed miserably, costing more to implement than they collected in revenue. America’s great friend and supporter William Pitt warned his colleagues in Parliament that they were putting 2 million pounds sterling in trade at risk for a hundred thousand pounds of taxes, which they were unable to collect. To paraphrase Shakespeare, for a failed tax, an empire was lost.

The composition of internal taxes varied across the colonies. The economies of New England consisted of small farmers and traders in the port cities and towns. Massachusetts, Connecticut, and New Hampshire collected the bulk of their revenues from direct taxes on polls and property, including professional income, business inventory and turnover, and interest. These taxes were supplemented with small amounts of revenue from duties, excises, and tonnage. Between 1715 and 1753, Rhode Island financed its public expenditures almost entirely from loan-office interest, which obviated any need for substantial direct or indirect taxes.

Apart from modest sums collected from duties and excises in the middle colonies, Pennsylvania, New Jersey, and Delaware relied largely on interest from the first issue of loan office bills, until the outbreak of the French and Indian War required new sources of revenue that took the form of direct taxes on polls and property. New York relied on indirect taxes, resorting to direct taxes in wartime to support its issue of paper bills.

A visitor to the colonies wrote in 1750: “A newly married man can, without difficulty, get a spot of ground where he may comfortably subsist with his wife and children. The taxes are very low, and he need not be under any concern on their account. The liberties he enjoys are so great that he considers himself a prince in his possessions.”

Maryland, Virginia, and South Carolina, the latter collecting considerable revenue from duties on Negro slaves, extracted most of their revenue from export duties on tobacco, rice, furs, lumber, and other commodities. Quitrents generated considerable revenue in these three colonies. North Carolina, an economy of small farmers, relied on poll taxes.

The composition of taxes in the colonies reflects the structure of their economies. The small farming communities of New England developed a comprehensive system of local assessment and collection of taxes on polls and property, with direct taxes on the income and wealth of urban dwellers in Boston, Newport, Providence, New London, and other port towns. The staple-exporting colonies of Virginia, Maryland, and South Carolina, along with the trading colonies of New York and Pennsylvania, relied on export or import duties, which were relatively straightforward, to collect at the point of loading or unloading. Quitrents were easy to impose on large landholdings in the middle and southern colonies, although compliance was often difficult to enforce.

British tax burdens were ten or more times heavier than those in the colonies. Whereas the colonists had largely cleared their public debts, British national debt reached record levels, meaning heavy taxes for years to come.

Internal politics also played a role in choosing what to tax. Rivalries between countryside and town, large plantations and small farmers, farmers and traders, and other social and economic divisions were reflected in tax burdens and levels of representation in colonial assemblies. Tax revolts, such as the Regulators in North Carolina, demonstrated that backcountry residents, who lived self-sufficient lives on the frontier, were discontented with taxes levied on them by low-country legislators.

It is important to note that Negro slaves, more than a fifth of the American population in 1775, had little say over their lives and surroundings, with slave owners reaping the economic rewards. On the eve of the Revolution, free whites in the southern colonies were twice as wealthy as their counterparts in the middle colonies and three times richer than those in New England.

Save in wartime, internal taxes in the colonies were light. Despite that, noncompliance and arrears were a chronic fact of fiscal life. The American Revolution was no accident, stumbled into by both sides on the basis of minor disagreements and misunderstandings. It was a tax revolt, first and foremost.

Historians have written that taxes in the new American nation rose and remained considerably higher, perhaps three times higher, than they were under British rule. More money was required for national defense than previously needed to defend the frontier from Indians and the French, and the new nation faced other expenses.

Nevertheless, reflecting its colonial antecedents, the scope of the federal government remained small, consuming only 3 percent of the national income as recently as 1929. The states remained the principal source of taxing and spending, consuming 7 percent of national income in 1929. It took the legislative measures enacted during the Great Depression to change the compact between the American people and their government, raising the share of taxes levied at all levels of government from a tenth to a third of the national income in peacetime, higher during wartime. The colonial roots of American taxation were lost in the transformation that took place in the twentieth century.

Available from the Hoover Press is The Flat Tax, updated revised edition, by Robert E. Hall and Alvin Rabushka. To order, call 800.935.2882 or visit www.hooverpress.org.