From Tactical Success To Strategic Victory 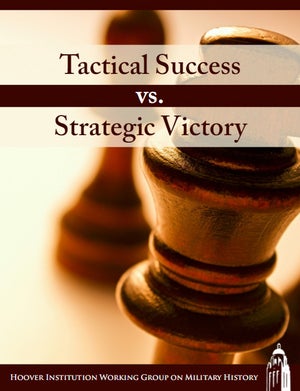 Since the Vietnam War, the United States has found it difficult to translate tactical successes on the battlefield against an array of enemies into long-term strategic advantage. A variety of reasons may explain this half-century phenomenon—from the growth in the number of nuclear powers and attendant deterrence, a change in attitudes among Western publics about the costs, utility, and morality of using armed force, to the informational revolution through social media, the Internet, and telecommunications that can bring even insignificant battles instantly to the attention and assessment of the entire world.

How We Fight in the Twenty-First Century: Winning Battles While Losing Wars
by Bing West

The intent of this essay is to shed light upon why the United States is performing so poorly in twenty-first-century warfare. War is the act of relentlessly destroying and killing until the enemy is broken physically and morally, and no longer resists the advancement of our policy objectives. By that definition, President Obama eschews war. Plus, our generals have imposed rules of engagement that prevent the application of our relative advantages in air and precision firepower. Our enemies do not fear us and our friends do not trust us. Sensible steps can turn that around, but that depends upon the next commander in chief. Our beloved nation does not have a martial spirit, and perhaps does not need one. It does need a military inculcated with a warrior spirit.

Seven broad errors account for America’s recent inability to turn tactical successes into strategic victories. In every instance, responsibility for the error has belonged to the White House. Excessive confidence in democratization and poor choices of allies left sustainment of strategic gains to governments incapable of preserving domestic order. Attempts to defeat insurgencies on the cheap, by speeding up counterinsurgency or relying on surgical strikes, allowed insurgencies to survive. Refusal to commit or maintain US ground forces undercut American efforts to assist and stabilize allies. By conveying intentions of military withdrawal, the United States encouraged opportunists to side with its enemies.

Why America Can't Win Its Wars
by Peter R. Mansoor

Poor strategic decision making since 2001 has involved the United States in messy civil wars that will take years, if not decades, to resolve. In Afghanistan, Iraq, and Libya, regime change has come easily, but a limited commitment to stabilizing those nations has resulted in messy, bloody, and expensive aftermaths. Those wars show that military success alone cannot ensure a stable post-conflict outcome. Only the presence of US military forces, economic aid, and a long-term political commitment from US policy makers to rebuild and restore defeated nations can ensure enduring peace.