The Unraveling of the EU and NATO 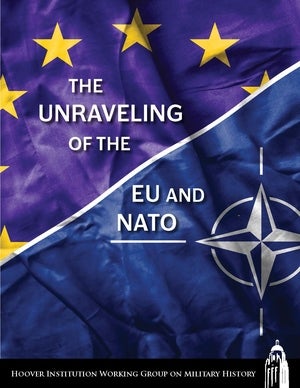 Criticism of both the European Union and NATO should not be seen as necessarily synonymous with advocacy for the end of either. Instead, needed reform is critical to save both organizations. In the case of the European Union, more decentralization, federalism, and democracy among EU members might arrest the unfortunate top-heavy and inflexible bureaucracies that have led to financial, immigration, and border disputes that could result in a continental wide version of Brexit. NATO’s problem may be somewhat the opposite: at present there may not be enough cohesion, military investment, and commonality among the disparate members, or sufficient centralized control, to marshall the necessary resources to deter threats to the Western alliance.

EU and NATO: Obsolete or Obstinate?
by Josef Joffe

Could the European Union fall apart? Would that end NATO, too? Or will the EU’s troubles lead to a more robust defense? “No” to all of the above. To begin, Brexit will not unleash mass defection because a) the 27 remaining nations are far more deeply integrated, and b) they regard the benefit-cost ratio far more favorably than does Britain. At heart an American alliance, NATO will endure, as it has for 70 years, as long as the U.S. guarantee holds. Precisely for that reason, the Europeans will not move toward an autonomous defense. Yet if the U.S. withdraws its umbrella, it is just as likely that Europe would seek safety in accommodating Russia.

The Brexit, along with Donald Trump’s criticisms of NATO, have raised questions about what a dissolution of these two multinational institutions might mean for the security and interests of the U.S. Despite justified criticisms of European NATO members’ failure to meet their financial obligations, NATO is unlikely to unravel. The British departure from the EU is more portentous. Longstanding problems with the EU reflect structural deficiencies that may not be amenable to further policy adjustments. A breakdown of the EU, however, could free up European nations to craft defense pacts and increase defense spending that would benefit America’s security.

A robust NATO remains a vital interest of the United States.  The greatest threat to its credibility comes not from Brexit, but the dangerous erosion of American power and purpose eight years of President Obama's Dangerous Doctrine has wrought. The restoration of American military power is the single most important measure the United States can take to ensure that NATO serves its essential purpose of keeping Putin out of Central Europe, keeping Germany pro-Western, and keeping the United States engaged as the default power in Europe and globally.  Paradoxically, Donald Trump's Presidency may spell the revival of NATO if he follows through on his commitment to increase defense spending substantially and sheds his illusions about Putin.

A Future for NATO and the European Union
by Paul Rahe

The North Atlantic Treaty Organization and the European Union are in disarray. The former has fulfilled its mission. Were it not for Russia’s seizure of the Crimea and invasion of Ukraine and the refugee crisis in Europe spawned by the sectarian Muslim conflict raging in Iraq and Syria, it would be an empty shell without any obvious function. The latter has overreached. A great success as a customs union, it is a disaster as a currency union; and the attempt to turn it into a federation—oligarchic in governance and equipped with an intrusive administrative apparatus—will end in tears.