The Hoover Institution broke ground on the construction of the George P. Shultz Building on Friday, one day after the distinguished fellow and eminent statesman’s memorial service was held at Stanford’s University historic Memorial Church. Monday, October 11, 2021 3 min read 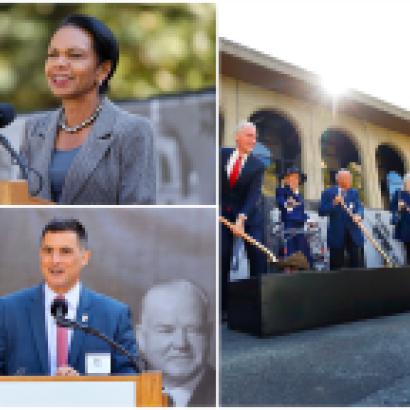 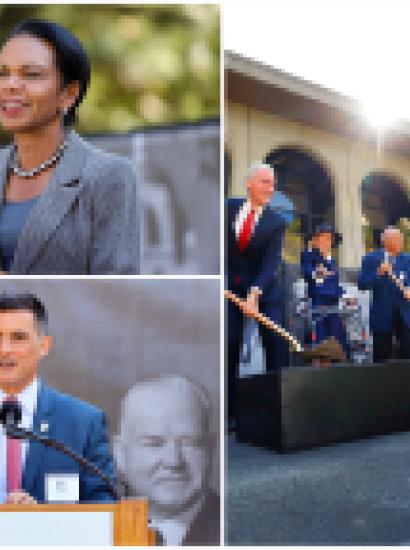 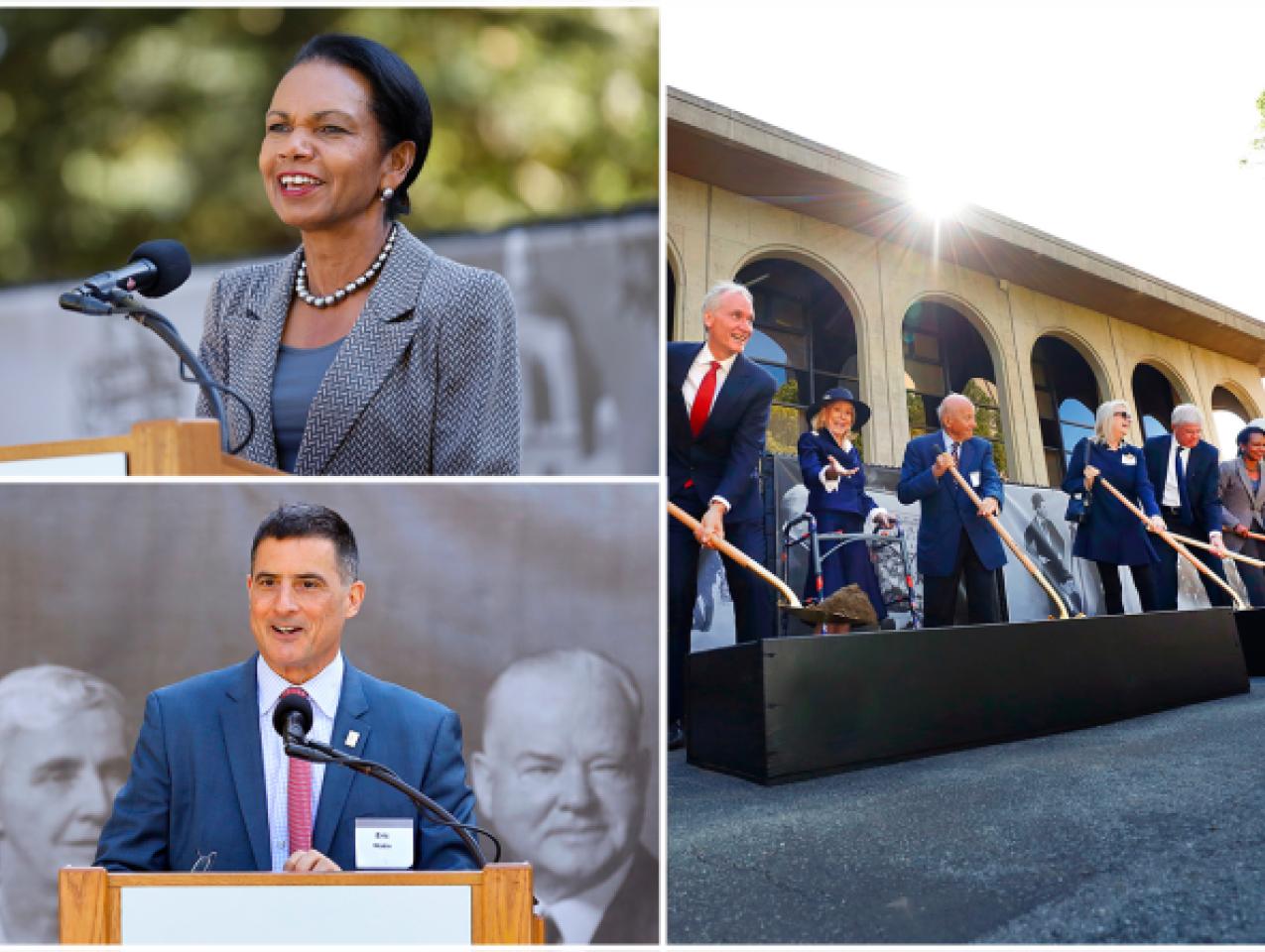 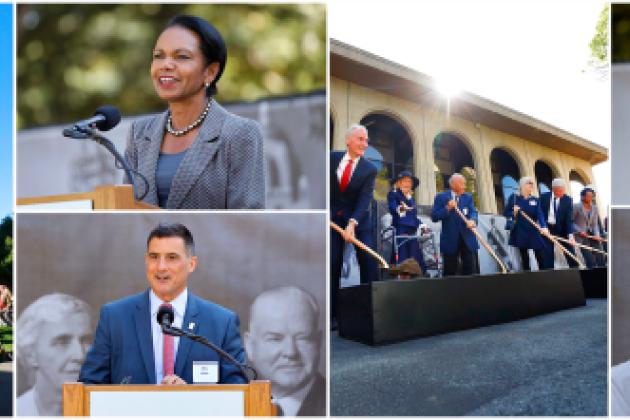 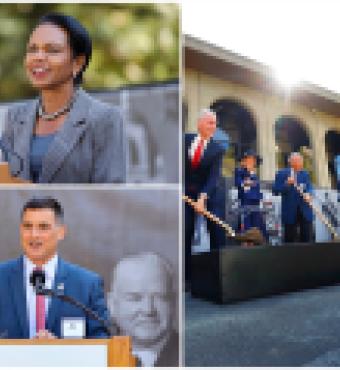 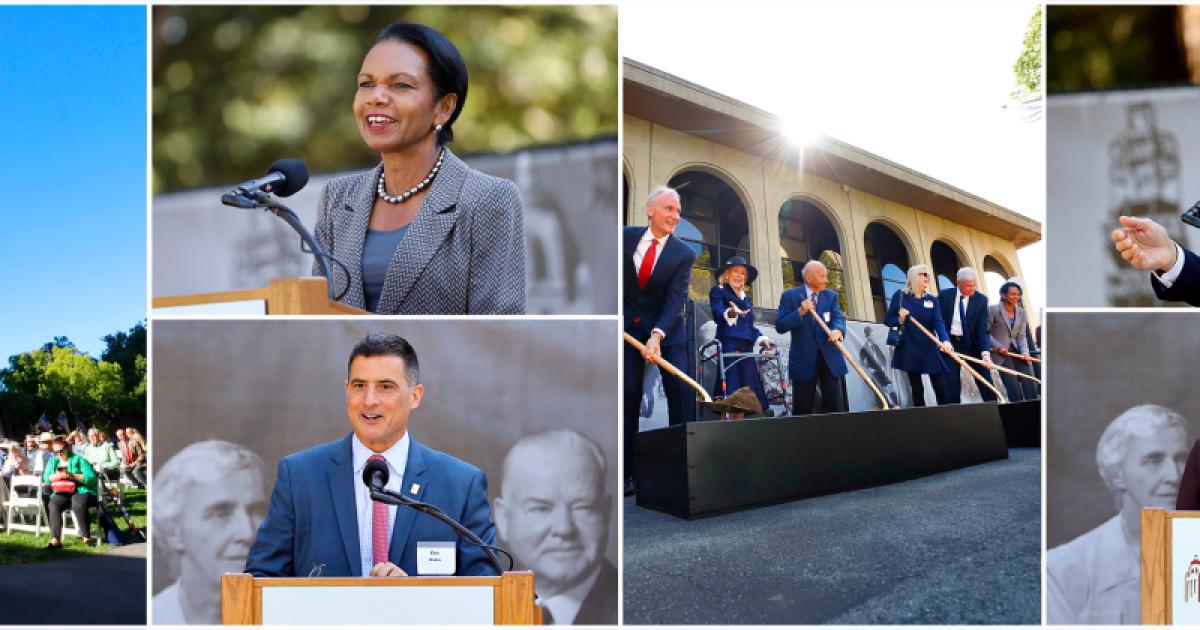 Hoover Institution (Stanford, CA) – The Hoover Institution broke ground on the construction of the George P. Shultz Building on Friday, one day after the distinguished fellow and eminent statesman’s memorial service was held at Stanford’s University historic Memorial Church.

Talking to a crowd of supporters, fellows, and members of the Shultz family in front of the Hoover Tower, leaders from Stanford University and the Hoover Institution paid tribute to the remarkable life of America’s sixtieth secretary of state and explained how the building, once completed, will be a fitting monument not only to his legacy as an American statesman but also to his extraordinary ability to convene scholars and policy leaders to share and conceptualize big ideas.

Replacing the Lou Henry Hoover Building, the state-of-the-art Shultz Building will house new offices for Hoover fellows and the institution’s revitalized research facilities, including an imaging studio to support the Library & Archives’ efforts to describe, conserve, and digitize important primary materials and make them available to scholars around the world. In addition, the new building will maintain a key element of its predecessor, the oval-shaped Annenberg Conference Room, which was designed to specifications by Secretary Shultz.

Hoover Institution director Condoleezza Rice said she admired Shultz’s commitment to the academic tradition of seeking truth. Rice explained that he made arguments based on evidence obtained from rigorous research and was constantly reaching across the aisle, testing and exchanging ideas with people who held opposing views. She added that in his pursuit of the truth on any given policy issue, Shultz had always kept an open mind. As secretary of state, he devoted a significant portion of time to working with his Soviet counterparts to reduce stockpiles of nuclear weapons. Later, as an elder statesman, he concluded that the deadly material should be eliminated from earth entirely.

“I can’t help but think that when Herbert Hoover started the Hoover Institution to improve the human condition, that he had in mind someone like George Shultz to carry on that tradition,” said Rice. “We welcome this new structure. But we recognize that it is what this structure will permit that really matters…the continuation of the legacy of the great convener.”

Stanford University president Marc Tessier-Lavigne said that he was impressed by Shultz’s willingness to bridge divides, even when opposing sides held each other in suspicion. Tessier-Lavigne recalled a December 2020 Washington Post op-ed that Shultz penned on his centenary birthday, “The 10 Most Important Things I’ve Learned about Trust over My 100 Years.” In the article, Shultz described how in 1973, when serving as Treasury secretary to President Nixon, he attended a wreath-laying ceremony at the World War II memorial in Leningrad with the Soviet Union’s then trade minister. As they were about to leave the memorial site, Shultz saluted the cemetery and acknowledged the heroism of Russian soldiers who defeated the German army thirty years prior.

“He later credited that day’s visit with earning him the trust of Soviet leaders, a trust that was critical when he began the long project of easing tensions between the two superpowers and paving the way for the end of the Cold War,” said Tessier-Lavigne. “George to me serves as an example of what we can achieve when we approach one another in a spirit of openness and work together with empathy and respect to try as best as we can to bridge our divides.”

Stanford provost Persis Drell also gave remarks at the ceremony, remembering how her father, renowned physicist and Hoover Senior Fellow Sidney Drell, developed a close friendship with Shultz. She said that while her father and Shultz came from distinct backgrounds and had their share of political differences, they formed a partnership based on the common conviction that the world should be free of nuclear weapons. Shultz and Drell worked together to outline concrete nuclear policy solutions that would be articulated in a series of Wall Street Journal op-eds co-written by Shultz, former secretary of state Henry Kissinger, former US senator Sam Nunn of Georgia, and former secretary of defense William Perry.

“George’s vision, his leadership, and his commitment to this cause and many others was nothing short of extraordinary,” said Drell. “The George P. Shultz Building will be a lasting monument to a man who excelled at bringing people together to take on some of the world’s great challenges.”

Tom Stephenson, chair of Hoover’s Board of Overseers and a driving force in support of the building project, said that he formed a task force with Shultz based on their mutual concern of rising carbon emissions. He described how Shultz developed the free-market concept of the carbon-neutral tax, and convened experts from all over the world to exchange ideas on how to address climate change and related challenges.

“The GPS building we are here to break ground for today is a very appropriate tribute to someone who has done so much for his country, but also for the Hoover Institution and for Stanford University in the decades since he stepped down as secretary of state,” Stephenson said.