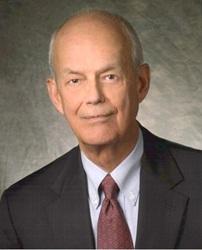 Admiral Inman served in the US Navy from November 1951 to July 1982, when he retired with the permanent rank of Admiral. While on active duty he served as the director of Naval Intelligence, vice director of the Defense Intelligence Agency, director of the National Security Agency, and deputy director of Central Intelligence. After retirement from the Navy, he was chairman and CEO of the Microelectronics and Computer Technology Corporation (MCC) in Austin, Texas for four years and chairman, president, and CEO of Westmark Systems, Inc.–a privately owned electronics industry holding company—for three years. Admiral Inman also served as Chairman of the Federal Reserve Bank of Dallas from 1987 through 1990.

Admiral Inman’s primary business activity since 1990 has been investing in start-up technology companies. Currently he is a managing director of Limestone Capital Advisors, he serves as a Trustee of the California Institute of Technology, and he is an elected Fellow of the National Academy of Public Administration. Admiral Inman holds honorary doctoral degrees from the Claremont Graduate University, the National Intelligence University, and Southwestern University.