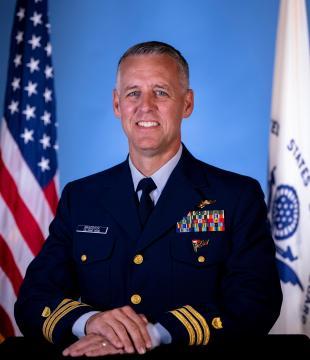 Commander Corey Braddock is a 26-year veteran of the U.S. military—18 with the Coast Guard (CG) and eight with the Army. He has served both Services leading troops, piloting aircraft, and as a staff officer across myriad of organizational constructs.

He recently completed a tour as Air Station San Francisco’s Executive Officer and served at Air Stations Detroit, MI; Air Station Savannah, GA; the Helicopter Tactical Interdiction Squadron in Jacksonville, FL; and CG headquarters. As an Army officer, he commanded troops in the 2nd Infantry Division, the 101st Airborne Division, and the 337th Infantry Regiment (AC/RC). He has over 4,000 hours flying the MH-65 Dolphin, UH-60 Blackhawk, and OH-58 Kiowa Warrior and is an instructor pilot, maintenance test pilot, and FAA airline transport pilot.

Commander Braddock earned an undergraduate degree from the U.S. Military Academy at West Point, a MBA from American Military University, and a MPA from the Harvard Kennedy School of Government. He is also a graduate of the Center for Homeland Defense and Security’s Executive Leadership Program.