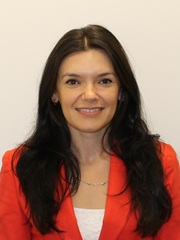 Marianna Kudlyak is an economist with research interests in the fields of macroeconomics, labor economics, and consumer finance. She works as a research advisor at the Federal Reserve Bank of San Francisco. She is also a visiting fellow at the Hoover Institution at Stanford University, a research fellow at the Centre for Economic Policy Research Monetary Economics and Fluctuations Programme, and a research fellow at the Institute of Labor Economics. She earned a PhD from the University of Rochester under the advisorship of Professor Mark Bils.

Dr. Kudlyak has conducted research on unemployment, non-employment, wages, online job searches, mortgage default, young borrowers, and inequality. Dr. Kudlyak and her coauthors have developed the Hornstein-Kudlyak-Lange Non-Employment Index, an alternative measure of resource utilization in the labor market, which is updated monthly and posted publicly via the St. Louis FRED database. She has published numerous articles in academic journals and Federal Reserve publications. Dr. Kudlyak is ranked in the top 5 percent of economists worldwide (over the last ten years of publications) by IDEAS/RePEc.