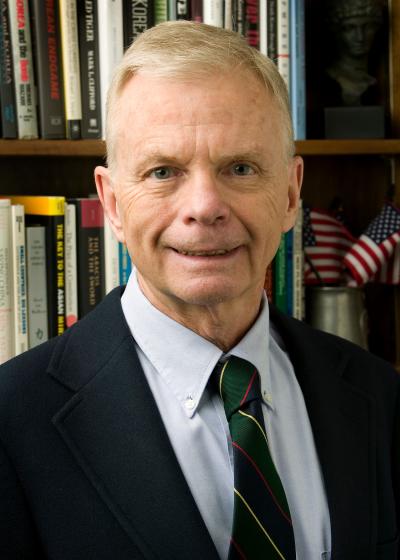 Thomas H. Henriksen is an emeritus senior fellow at the Hoover Institution, where he focuses on American foreign policy, international political affairs, and insurgencies. He specializes in the study of US diplomatic and military courses of action toward terrorist havens in the non-Western world and toward rogue regimes.

Henriksen's latest book is America's Wars: Interventions, Regime Change, and Insurgencies after the Cold War (published by Cambridge University Press.)  His Cycles in U.S. Foreign Policy since the Cold War was published by Palgrave in 2017. The year before, Eyes, Ears & Daggers: Special Operations Forces and the Central Intelligence Agency in America's Evolving Struggle against Terrorism was published.

Earlier his book, America and the Rogue States, was published by Palgrave Macmillan in 2012. It analyzes Washington’s interactions with Iran, North Korea, and other rogue nations since the Cold War. It was preceded by American Power after the Berlin Wall (2007), which examines US policy through the prism of US interventions in Panama, Somalia, Haiti, Bosnia, Kosovo, Afghanistan, and Iraq (twice). Other books and monographs include Foreign Policy for America in the 21st Century: Alternative Perspectives, Using Power and Diplomacy to Deal with Rogue States, and an edited collection, North Korea after Kim Il Sung (Hoover Institution Press, 1999).

He also authored or edited the following books and monographs: One Korea? Challenges and Prospects for Reunification; The New World Order: War, Peace, and Military Preparedness; Revolution and Counterrevolution: Mozambique's War of Independence; The Struggle for Zimbabwe: Battle in the Bush; Soviet and Chinese Aid to African Nations; and Mozambique: A History, which was selected by Choice magazine for its Outstanding Book Award for African History. Additionally, he has written numerous journal articles and newspaper commentaries concerning international politics and security.

He is also a senior fellow at the US Joint Special Operations University (JSOU), where he concentrates on counterinsurgency practices. For JSOU, he has authored monographs entitled Dividing Our Enemies; The Israeli Approach to Irregular Warfare; Is Leaving the Middle East a Viable Option?; What Really Happened in Northern Ireland's Counterinsurgency; and Afghanistan, Counterinsurgency, and the Indirect Approach. His most recent monograph is WHAM: Winning Hearts and Minds in Afghanistan and Elsewhere.

He was a trustee of the George C. Marshall Foundation for 25 years. During the 1979–80 academic year, he was the Susan Louise Dyer Peace Fellow at the Hoover Institution. He taught history at the State University of New York from 1969 until he left in 1979 as a full professor. During 1963–65, Henriksen served as an infantry officer in the US Army. His other national public service includes participation as a member of the US Army Science Board (1984–90) and the President's Commission on White House Fellowships (1987–93). He also received a Certificate of Appreciation for Patriotic Civilian Service from the US Department of the Army in 1990.

Henriksen received his BA from Virginia Military Institute and his MA and PhD from Michigan State University. He was selected for membership in Phi Alpha Theta, the history honorary society, as a graduate student.