A License To Hate

Why America’s progressives flaunt their abusive disdain for Trump voters. 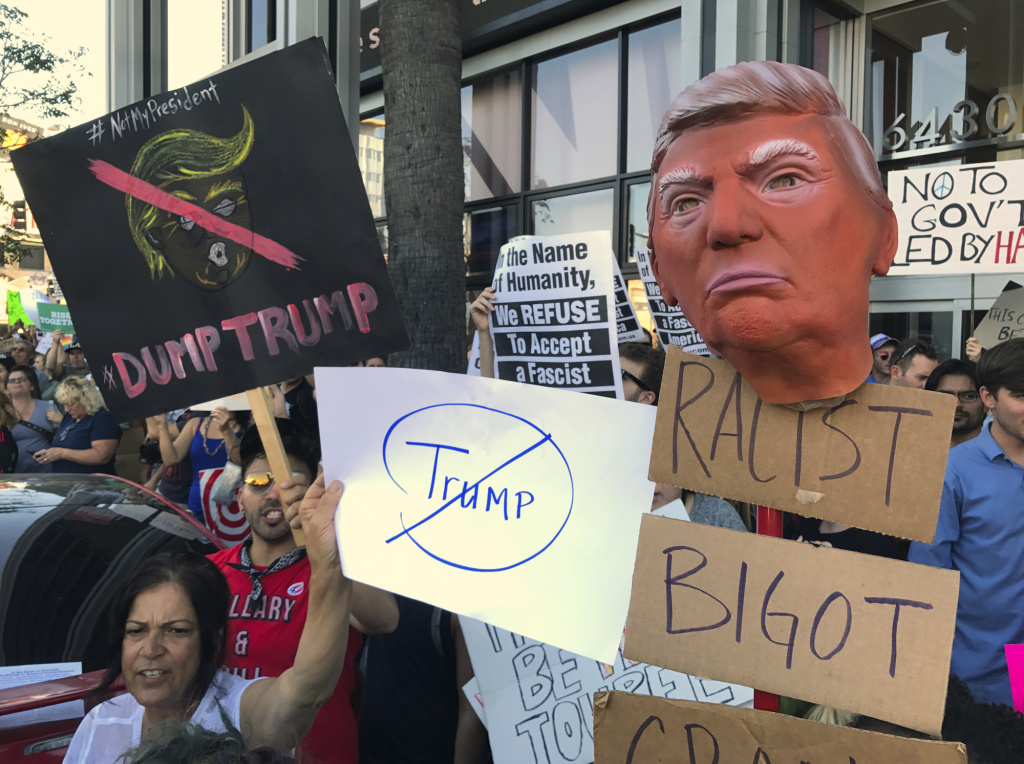 A License To Hate 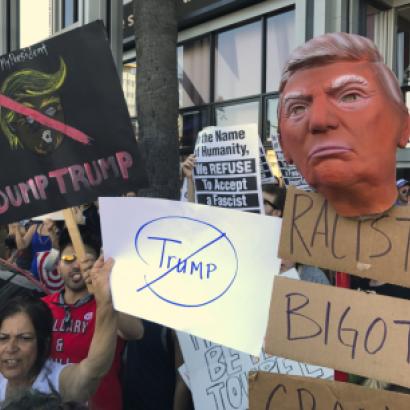 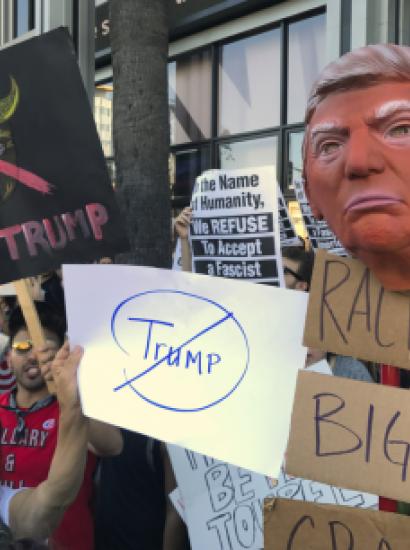 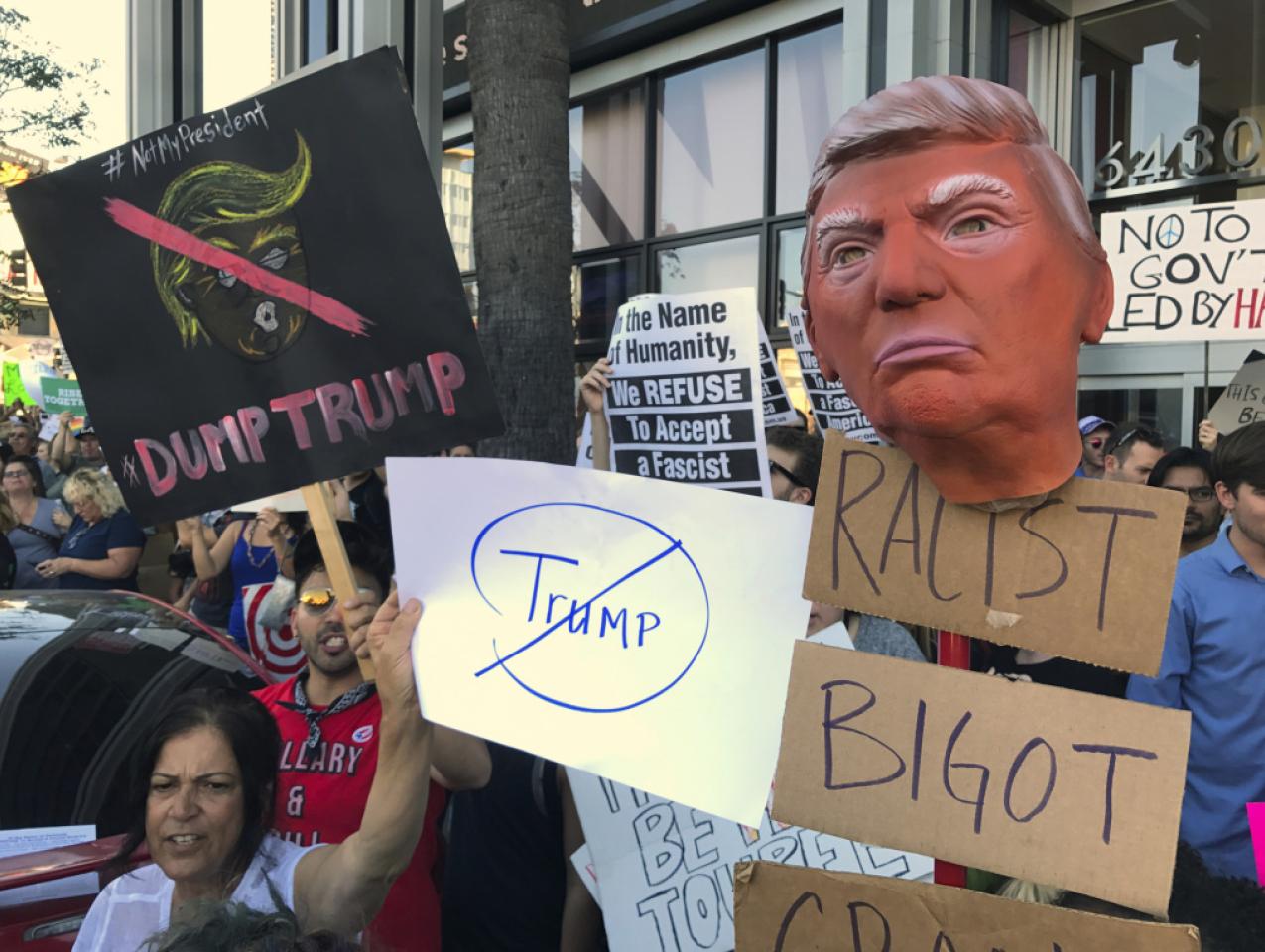 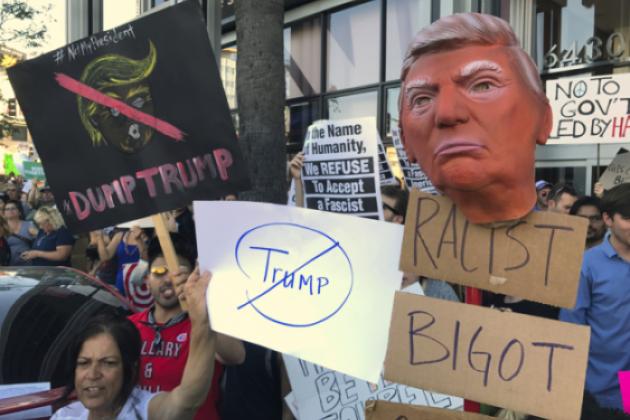 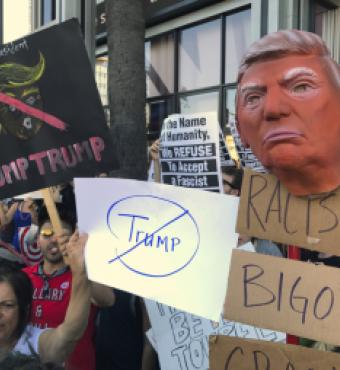 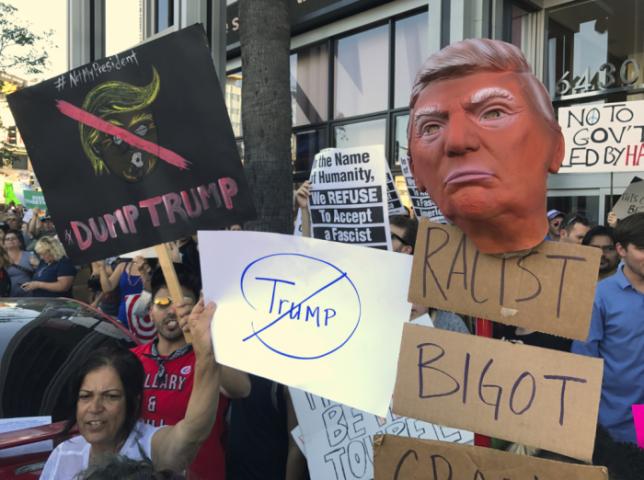 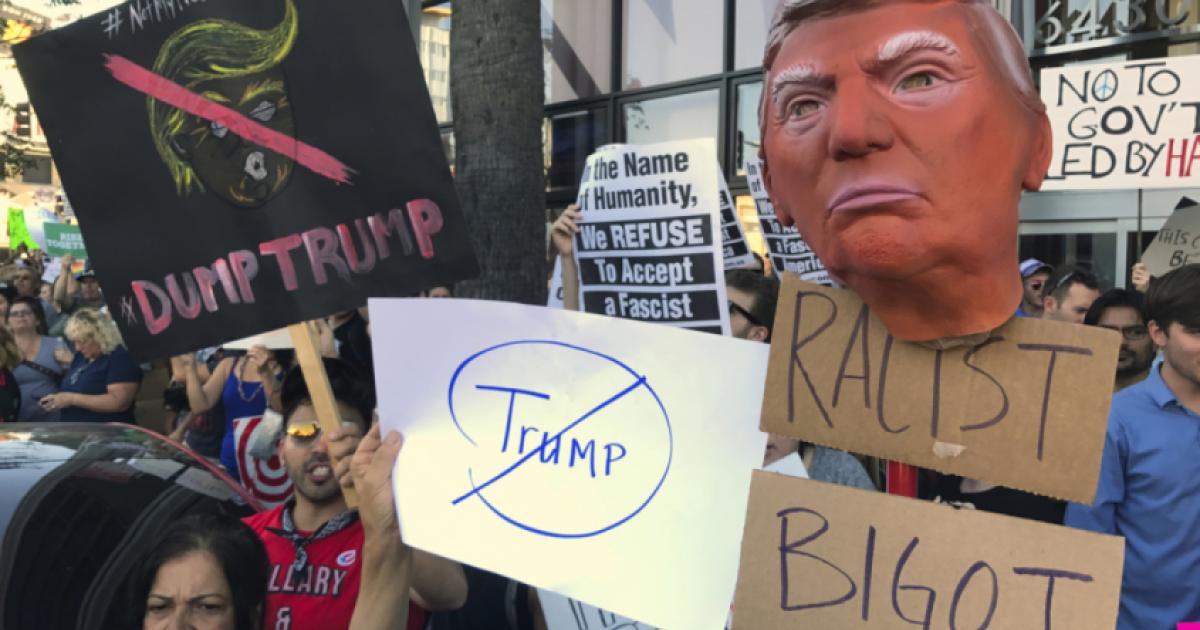 Wilson was not original in his smear of the 63 million Americans who voted for Trump. He was likely resonating an earlier slander of Politico reporter Marco Caputo. The latter had tweeted of the crowd he saw at a Trump rally: “If you put everyone’s mouths together in this video, you’d get a full set of teeth.”

Was the point of these stereotypes that poor white working-class people who supposedly voted for the controversial Trump understandably ate improperly, did not practice proper dental hygiene, or did not visit dentists—or all three combined?

When challenged, Caputo doubled down on his invective. He snarled, “Oh no! I made fun of garbage people jeering at another person as they falsely accused him of lying and flipped him off. Someone fetch a fainting couch.”

Caputo’s “Garbage people” was also a synonym for the smears that two career FBI agents on separate occasions had called the archetypical Trump voters.

In the released trove of the Department of Justice text communications involving the Clinton email probe, an unidentified FBI employee had texted to another FBI attorney his abject contempt for the proverbial Trump voter and indeed middle America itself: “Trump’s supporters are all poor to middle class, uneducated, lazy POS [“pieces of sh*t”].” In fact, Trump in 2016 received about 90 percent of all Republican votes, about the same ratio as won by both recent presidential candidates John McCain and Mitt Romney.

In the now notorious text communications between Lisa Page and Peter Strzok, fired FBI operatives on Robert Mueller’s special counsel team, Strzok right before the 2016 election had texted his paramour Page: “Just went to a southern Virginia Walmart. I could SMELL the Trump support.”

Recently actor Jim Carey tweeted a picture of Trump supporters as apes, as if evolution is now operating in reverse as Trumpians descend into primate status.

Rep. Hank Johnson (who on prior occasions had referred to Jewish residents on the West Bank as “termites,” and believed that too many American troops based on the shoreline of Guam might “tip” the island over and capsize it) recently compared Trump to Hitler, and characterized Trump’s supporters—which included 90 percent of the Republican Party—as “older, less educated, less prosperous, and they are dying early. Their lifespans are decreasing, and many are dying from alcoholism, drug overdoses, liver disease, or simply a broken heart caused by economic despair." For former Vice President Joe Biden, Trump supporters are “virulent people” and “the dregs of society”.

Note the force of such dehumanizing invective that transcends political differences. Trump voters were not just mistaken in their political allegiances. Instead they looked like toothless zombies and stunk up stores, and are not quite human, and are destined to die off. And all this from supposedly progressive humanists, quick to demonize others who would mimic their venom.

At about the same time as Wilson’s recent smear, multimillionaire TV personality Donny Duetsch weighed in on television about the Trump supporters who favor building a barrier on the southern border to discourage illegal immigration:

“This is all [Trump] has left. That one metaphor, that one thing that talks to that 39, 40, 41% base that says: either the black man, or the brown man, or the Jewish man, or the media man, or the banker man is coming to take your wife?” According to Duetsch’s analysis, were the legions of Democrats—including Sens. Biden and Chuck Schumer—who supported the Secure Fence Act of 2006 that authorized hundreds of miles of border fencing, also worried over their virility or is just the working middle class?

Both Wilson and Deutsch in the past had also characterized Trump supporters as Nazi-like. Both, in lieu of any analyses of why or how Trump got elected or has found success in restoring the economy to robust growth, resorted to crude stereotypes of a constituency in a fashion they knew would be exempt from criticisms of bias and crude stereotyping. Similarly, for historian Jon Meacham and Rep. Stephen Cohen (R-TN), Trump’s audience and appeal are similar to those of the Ku Klux Klan’s of the 1920s.

The New York Times takes loud pride in its adamant opposition to hatred and racial, class, and gender bias—at least in theory.  That is why it both hired and understandably fired in the same day tech writer Quinn Norton, once it discovered that she had remained friends with notorious Alt-right racist Andrew Auernheimer, despite claims of frequently disassociating herself from his repugnant views.

Yet the Times hired and kept another tech writer on its editorial board, the racist Harvard Law School grad Sarah Jeong. She had not just befriended a racist, but was an abject hater herself—at least if her twitter trove can be believed. But the difference was twofold, Jeong was Asian-American, and the objects of her hatred were purportedly old and white. And she apparently knew well that such a formula provided her exemption from any criticism for expressing toxicity.

Indeed, Jeong was never shy about her crude dehumanizing venom: “Are white people genetically predisposed to burn faster in the sun, thus logically being only fit to live underground like groveling goblins?” And “Oh man it’s kind of sick how much joy I get out of being cruel to old white men.” And “White people marking up the internet with their opinions like dogs pissing on fire hydrants.” And on and on.

These outbursts were all voiced from highly educated elites (Caputo has a journalism degree from the University of Miami, Deutsch graduated from the Wharton School, Jeong from Harvard Law School, Strzok received a master’s degree from Georgetown, Wilson attended George Washington University). And all engaged in vicious and cowardly stereotyping of a demographic in a manner that they assumed involved no downside. Rather, the smears were delivered on the expectation of winning approbation from their peers. And they did in twitter-fueled competitions to find the crudest pejoratives.

For decades race and gender studies academics had argued that overtly expressed racism against whites was not real racism, but could be contextualized by prior white oppression. In the age of furor against Trump, their theories now went off campus and were being adjudicated by a wider constituency—and yet they did not seem to win agreement from the general public. The irony, of course, is that these professionals displayed far less humanity in their crude putdowns about smells, toothlessness and apes than did the targets of their smears.

But the hatred was not confined to the media and politicos, but rather also came from the very top of the Democratic Party. After the election, a defeated Hillary Clinton openly doubled-down on her earlier smear of Trump’s base as deplorables and irredeemables, in recalibrating Barack Obama’s old saw of the white working class as “clingers” who had failed to appreciate his transformative candidacy. Clinton told an audience in Mumbai, India:

“I won the places that are optimistic, diverse, dynamic, moving forward. And his whole campaign, Make America Great Again, was looking backwards. You don’t like black people getting rights, you don’t like women getting jobs, you don’t want to see that Indian American succeeding more than you are, whatever that problem is, I am going to solve it.”

New York Times reporter Amy Chozick, who had followed the Hillary Clinton 2016 campaign, wrote of the embittered inner Clinton circle: “The Deplorables always got a laugh, over living-room chats in the Hamptons, at dinner parties under the stars on Martha’s Vineyard, over passed hors d’oeuvres in Beverly Hills, and during sunset cocktails in Silicon Valley.”

What is again odd about these examples of open progressive racist, cultural, and class contempt for the American interior, is not just how ubiquitously politicians and journalists voiced them, but also how candidly and indeed confidently they repeated notions of smelly, toothless, ape-like, lazy “garbage people.” In that sense, who hated Trump and what he represented also explains precisely why so many went to the polls to elect him, and perhaps also why Trump’s own uncouthness was in its own manner contextualized by his supporters as a long overdue pushback to the elite disdain and indeed hatred shown them.

What does all this hate speech signify?

One, there is terrible frustration among both the progressive Left (and the Never Trump Right whose luminaries have mused about replacing a supposed spent white working class with purportedly more energetic immigrants). So far Trump has not been stopped. His foreign and domestic agendas often find success and resonate with about 40-45 percent of the American people. Much of the uncouthness, then, reflects their own frustrations and sense of alienation that millions of Americans have tuned them out.

Second, most of the slurs are voiced by elites, especially politicos, journalists, and celebrities. Perhaps their angst is driven by class—as in how can their own superior logic and reasoning fail to resonate with 63 million voters? Answer: Trump voters are hopelessly obtuse to the point that they cannot even take care of their own personal hygiene or are now descending into simian status.

Third, cowardice plays a role. Those who slander the deplorables and irredeemables assume that they can say almost anything and expect no pushback, given the white working classes lack the romance of the poor and the supposed panache of the elite. A race to the bottom develops in which the more the hatred, the more the clicks and the media exposure. Minority critics expect their own identity politics affiliations to shield them from criticism. Wealthy white elites virtue-signal their disgust for those without privilege as a way of ensuring that those like themselves, who most certainly enjoy privilege, are rewarded with ideological exemptions for it.

Finally, we are learning that the entire idea of political correctness was never much about universal ideas of tolerance of the other, or insistence that language and protocols must not stigmatize individuals by lumping them into stereotyped and dehumanized collective groups.  What we are witnessing, instead, is that it is fine to demonize millions, from their appearance to their purported hygiene and smell to affinities with feces and apes—if it serves political or cultural agendas.

In sum, cultural progressivism is about raw power, not principle.