Chomsky talks an anti-capitalist game, but what does he practice? Market economics at their most profitable. By Peter Schweizer. 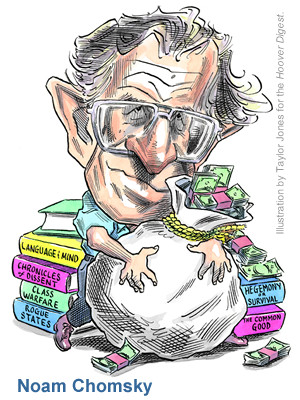 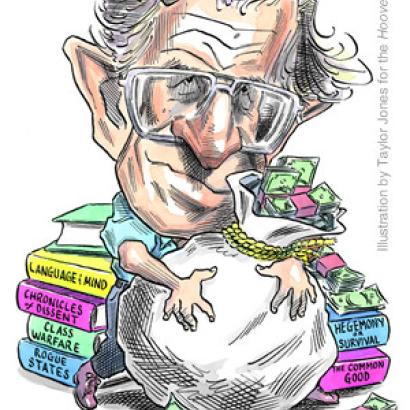 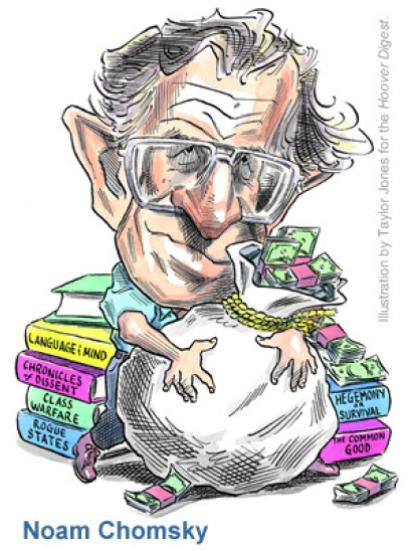 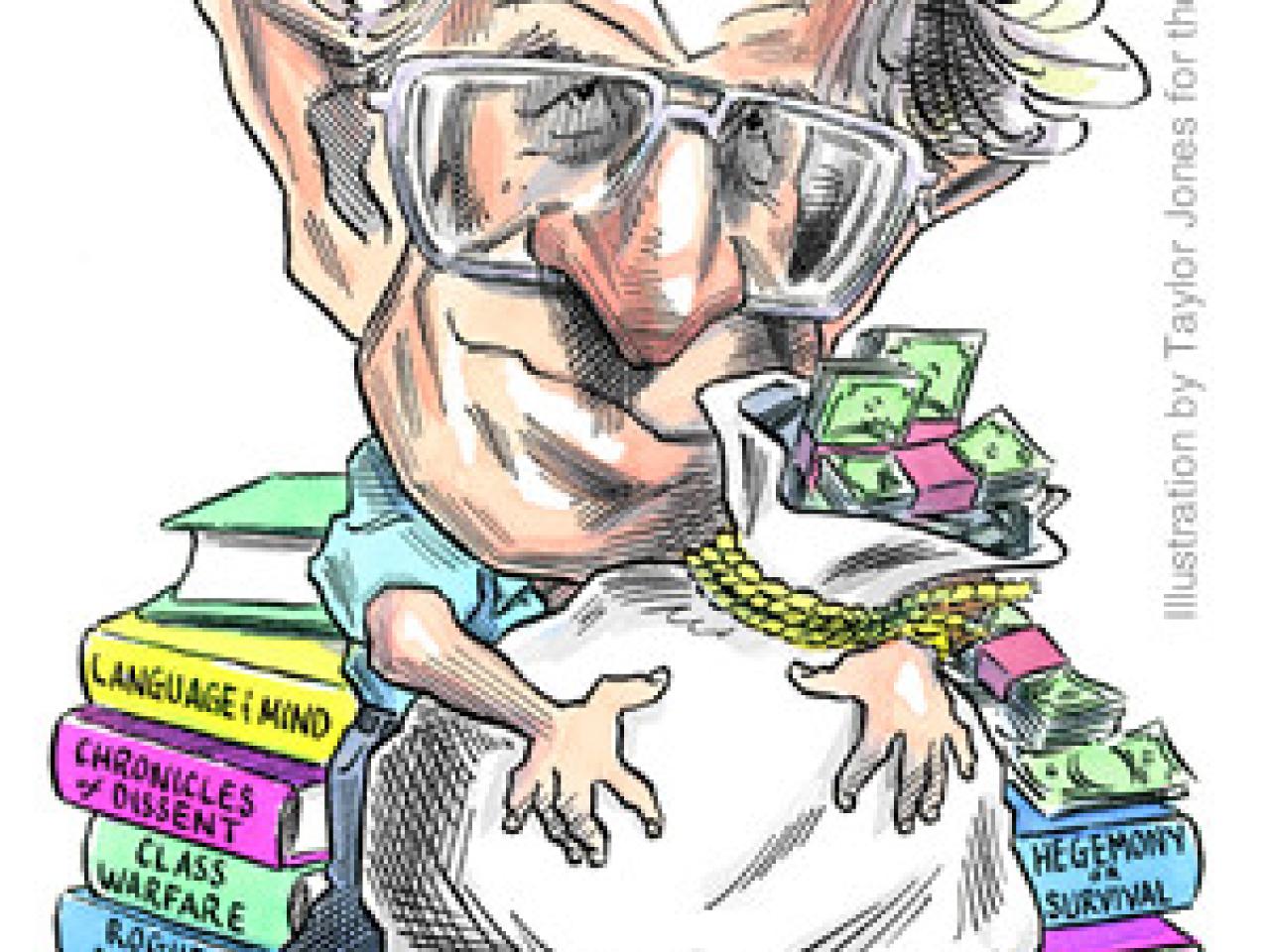 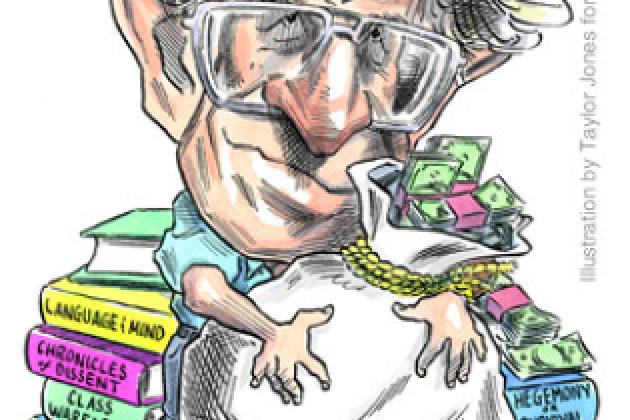 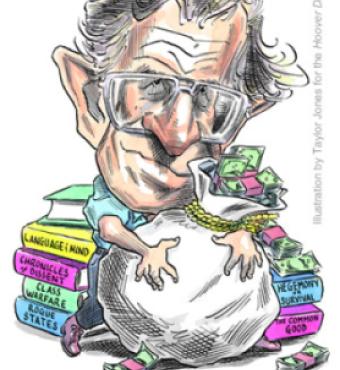 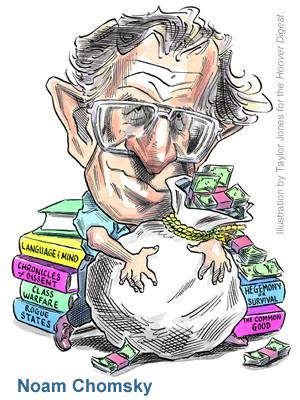 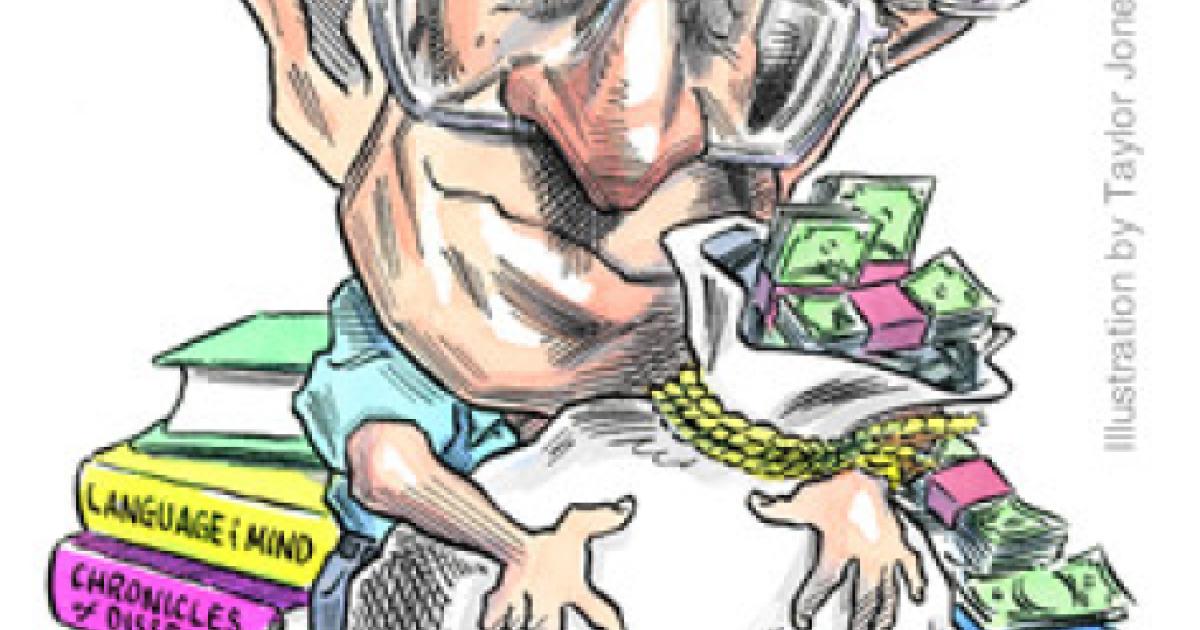 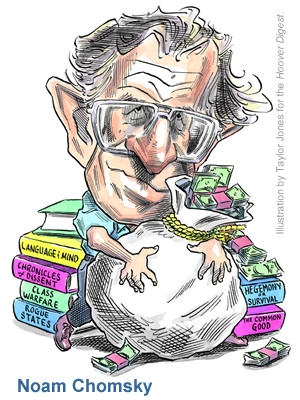 One of the most persistent themes in Noam Chomsky’s work has been class warfare. He has frequently lashed out against the “massive use of tax havens to shift the burden to the general population and away from the rich” and criticized the concentration of wealth in “trusts” by the wealthiest 1 percent. The American tax code is rigged with “complicated devices for ensuring that the poor—like 80 percent of the population—pay off the rich.”

But trusts can’t be all bad. After all, Chomsky, with a net worth north of $2,000,000, decided to create one for himself. A few years back he went to Boston’s venerable white-shoe law firm, Palmer and Dodge, and, with the help of a tax attorney specializing in “income-tax planning,” set up an irrevocable trust to protect his assets from Uncle Sam. He named his tax attorney (every socialist radical needs one!) and a daughter as trustees. To the Diane Chomsky Irrevocable Trust (named for another daughter) he has assigned the copyright of several of his books, including multiple international editions.

Chomsky favors the estate tax and massive income redistribution—just not the redistribution of his income. No reason to let radical politics get in the way of sound estate planning.

When I challenged Chomsky about his trust, he suddenly started to sound very bourgeois: “I don’t apologize for putting aside money for my children and grandchildren,” he wrote in one e-mail. Chomsky offered no explanation for why he condemns others who are equally proud of their provision for their children and who try to protect their assets from Uncle Sam. Although he did say that the tax shelter is okay because he and his family are “trying to help suffering people.”

Indeed, Chomsky is rich precisely because he has been such an enormously successful capitalist. Despite the anti-profit rhetoric, like any other corporate capitalist he has turned himself into a brand name. As John Lloyd puts it, writing critically in the lefty New Statesman, Chomsky is among those “open to being ‘commodified’—that is, to being simply one of the many wares of a capitalist media market place, in a way that the badly paid and overworked writers and journalists for the revolutionary parties could rarely be.”

Chomsky’s business works something like this. He gives speeches on college campuses around the country at $12,000 a pop, often dozens of times a year.

Can’t go and hear him in person? No problem: you can go online and download clips from earlier speeches—for a fee. You can hear Chomsky talk for one minute about “Property Rights”; it will cost you 79 cents. You can also buy a CD with clips from previous speeches for $12.99.

But books are Chomsky’s mainstay, and on the international market he has become a publishing phenomenon. The Chomsky brand means instant sales. As publicist Dana O’Hare of Pluto Press explains: “All we have to do is put Chomsky’s name on a book and it sells out immediately!”

Putting his name on a book should not be confused with writing a book because his most recent volumes are mainly transcriptions of speeches, or interviews that he has conducted over the years, put between covers and sold to the general public. You might call it multi-level marketing for radicals. Chomsky has admitted as much: “If you look at the things I write—articles for Z Magazine, or books for South End Press, or whatever—they are mostly based on talks and meetings and that kind of thing. But I’m kind of a parasite. I mean, I’m living off the activism of others. I’m happy to do it.”

Chomsky’s marketing efforts shortly after September 11 give new meaning to the term war profiteer. In the days after the tragedy, he raised his speaking fee from $9,000 to $12,000 because he was suddenly in greater demand.

He also cashed in by producing another instant book. Seven Stories Press, a small publisher, pulled together interviews conducted via e-mail that Chomsky gave in the three weeks following the attack on the Twin Towers and rushed the book to press. His controversial views were hot, particularly overseas. By early December 2001, the pushlisher had sold the foreign rights in 19 different languages. The book made the best-seller list in the United States, Canada, Germany, India, Italy, Japan, and New Zealand. It is safe to assume that he netted hundreds of thousands of dollars from this book alone.

Over the years, Chomsky has been particularly critical of private property rights, which he considers simply a tool of the rich, of no benefit to ordinary people. “When property rights are granted to power and privilege, it can be expected to be harmful to most,” Chomsky wrote on a discussion board for the Washington Post. Intellectual property rights are equally despicable. According to Chomsky, for example, drug companies who have spent hundreds of millions of dollars developing drugs shouldn’t have ownership rights to patents. Intellectual property rights, he argues, “have to do with protectionism.”

Protectionism is a bad thing—especially when it relates to other people. But when it comes to Chomsky’s own published work, this advocate of open intellectual property suddenly becomes very selfish. It would not be advisable to download the audio from one of his speeches without paying the fee, warns his record company, Alternative Tentacles. (Did Andrei Sakharov have a licensing agreement with a record company?) And when it comes to his articles, you’d better keep your hands off. Go to the official Noam Chomsky website (www.chomsky.info) and the warning is clear: “Material on this site is copyrighted by Noam Chomsky and/or Noam Chomsky and his collaborators. No material on this site may be reprinted or posted on other web sites without written permission.” However, the website does give you the opportunity to “sublicense” the material if you are interested.

Radicals used to think of their ideas as weapons; Chomsky sees them as a licensing opportunity.

Chomsky has even gone the extra mile to protect the copyright to some of his material by transferring ownership to his children. Profits from those works will thus be taxed at his children’s lower rate. He also extends the length of time that the family is able to hold onto the copyright and protect his intellectual assets.

In October 2002, radicals gathered in Philadelphia for a benefit entitled “Noam Chomsky: Media and Democracy.” Sponsored by the Greater Philadelphia Democratic Left, for a fee of $15 you could attend the speech and hear the great man ruminate on the evils of capitalism. For another $35, you could attend a post-talk reception and he would speak directly with you.

During the speech, Chomsky told the assembled crowd, “A democracy requires a free, independent, and inquiring media.” After the speech, Deborah Bolling, a writer for the lefty Philadelphia City Paper, tried to get an interview with Chomsky. She was turned away. To talk to Chomsky, she was told, this “free, independent, and inquiring” reporter needed to pay $35 to get into the private reception.

Corporate America is one of Chomsky’s demons. It’s hard to find anything positive he might say about American business. He paints an ominous vision of America suffering under the “unaccountable and deadly rule of corporations.” He has called corporations “private tyrannies” and declared that they are “just as totalitarian as Bolshevism and fascism.” Capitalism, in his words, is a “grotesque catastrophe.”

But a funny thing happened on the way to the retirement portfolio.

Chomsky, for all of his moral dudgeon against American corporations, finds that they make a pretty good investment. When he made investment decisions for his retirement plan at MIT, he chose not to go with a money market fund or even a government bond fund. Instead, he threw the money into blue chips and invested in the TIAA-CREF stock fund. A look at the stock fund portfolio quickly reveals that it invests in all sorts of businesses that Chomsky says he finds abhorrent: oil companies, military contractors, pharmaceuticals, you name it.

When I asked Chomsky about his investment portfolio he reverted to a “what else can I do?” defense: “Should I live in a cabin in Montana?” he asked. It was a clever rhetorical dodge. Chomsky was declaring that there is simply no way to avoid getting involved in the stock market short of complete withdrawal from the capitalist system. He certainly knows better. There are many alternative funds these days that allow you to invest your money in “green” or “socially responsible” enterprises. They just don’t yield the maximum available return.

This essay is adapted from the author’s new book Do As I Say (Not As I Do): Profiles in Liberal Hypocrisy (Doubleday, 2005). Available from the Hoover Press is The Fall of the Berlin Wall, edited by Peter Schweizer. To order, call 800.935.2882 or visit www.hooverpress.org.