Sixty years later, a look back at the longest and bloodiest urban insurgency of the Second World War. By Maciej Siekierski.SIDEBAR: History of a Friendship: Herbert Hoover and Poland
SIDEBAR: Hoover’s Polish Collection 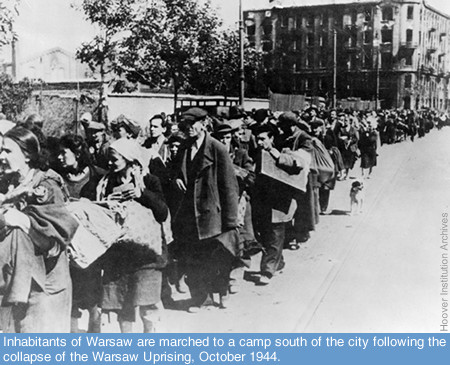 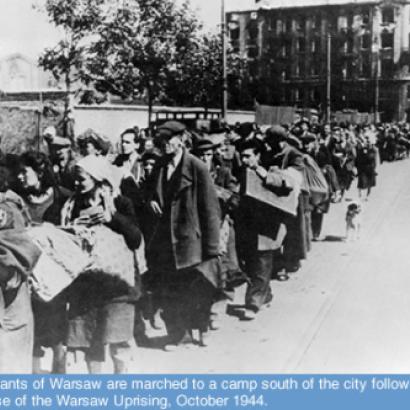 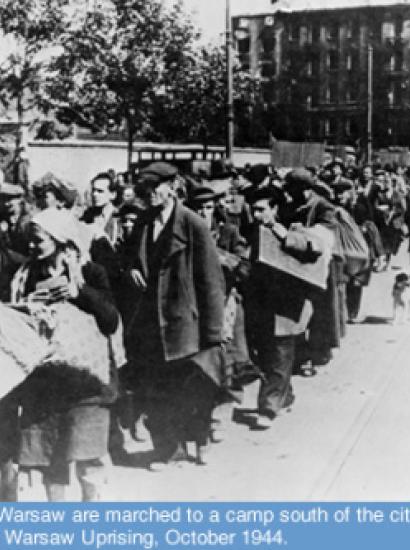 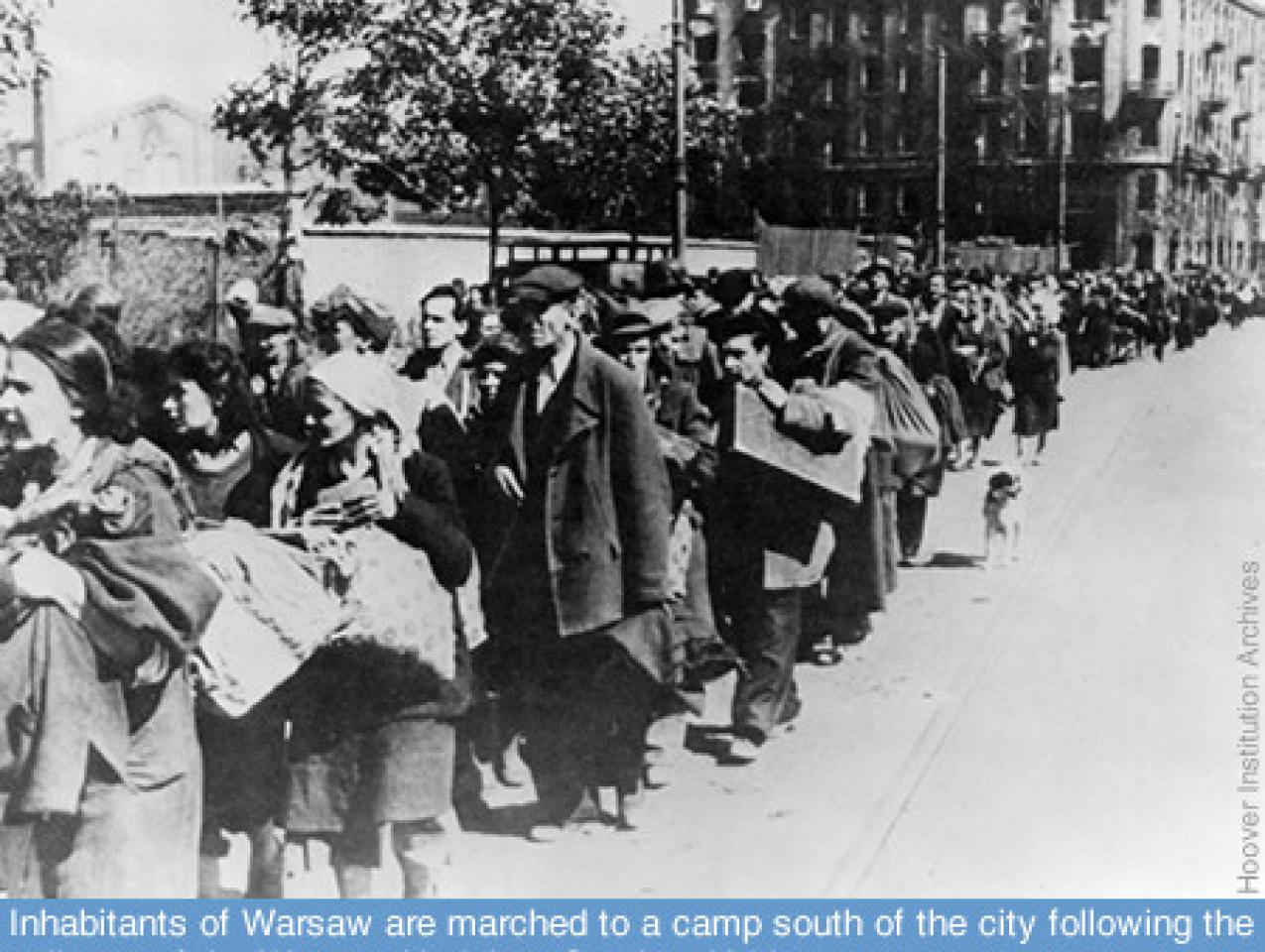 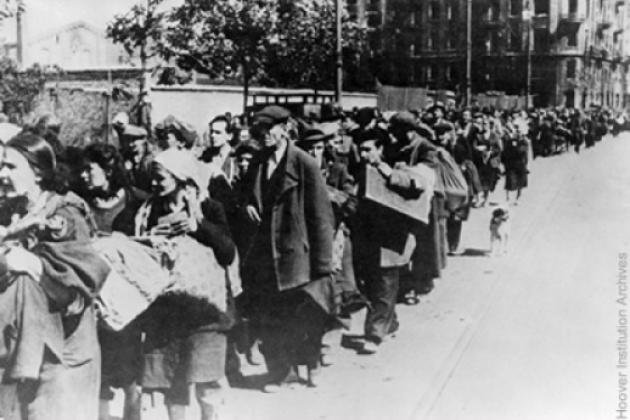 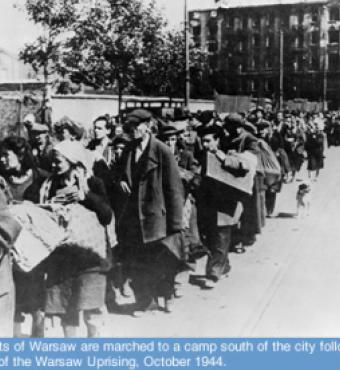 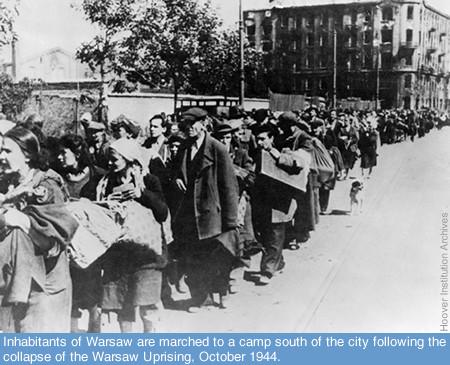 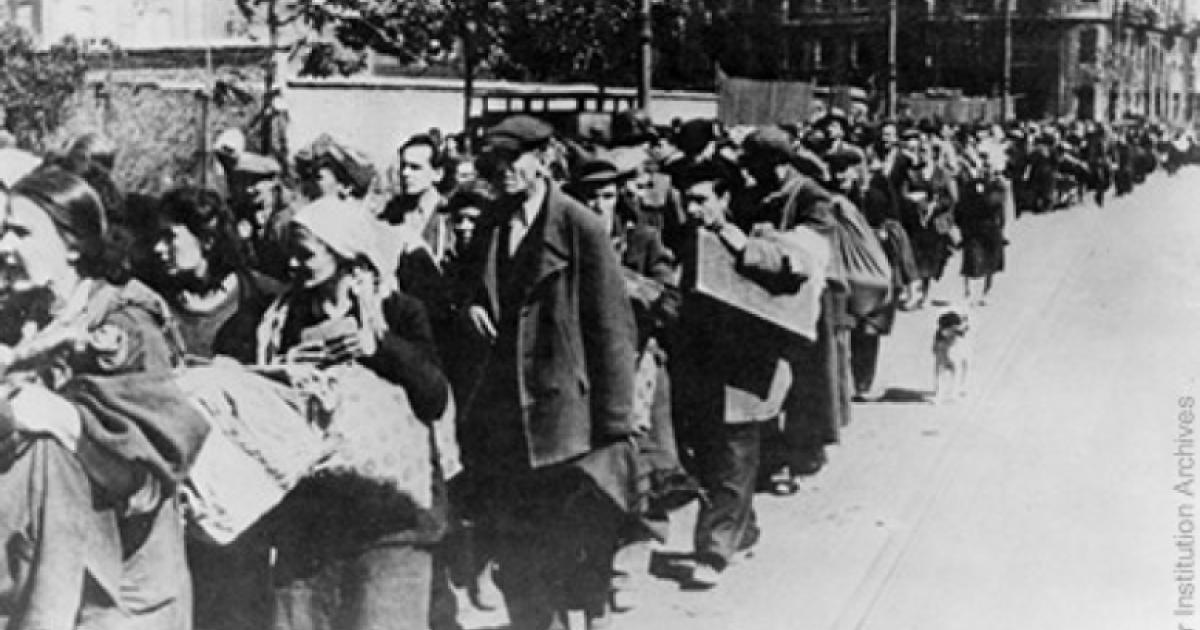 A City under Siege

In the first half of the twentieth century, no European capital had a more eventful and tragic history than Warsaw. It was occupied by the German army during World War I, and its eastern suburbs were scorched during the Bolshevik onslaught in 1920. The city succumbed to the Nazi invasion in 1939 after a month of indiscriminate artillery shelling and aerial bombing. German occupation was particularly brutal and deadly. The Jewish population of more than 350,000 was confined to a walled ghetto and systematically exterminated by deportations to death camps, hunger, disease, and executions. The process was completed in the spring of 1943, despite the heroic resistance of several hundred Jewish fighters in the Warsaw Ghetto Uprising.

Poland was the first country in Europe to resist Hitler: World War II started in Poland with a coordinated Nazi and Soviet invasion in September 1939. Poland’s five-week struggle against overwhelming forces ended in defeat and the country’s being partioned between Germany and the Soviet Union. Almost simultaneously a government in exile was set up, first in France and then in London. Polish units made up of refugees in Western Europe fought with distinction in defense of France and later in the Battle of Britain. By the summer of 1944, with the release of tens of thousands of prisoners and deportees from the Soviet Union, the Polish government in exile commanded an army of some 150,000 soldiers. Free Polish divisions were a significant component of the Allied effort. In Italy, the Polish Second Corps under General Wladyslaw Anders succeeded where the British and Americans had failed, capturing the German-fortified abbey of Monte Cassino. In France, after the Normandy invasion, the Polish First Armored Division helped to inflict a crushing defeat on the Germans at Falaise.

Inside occupied Poland, anti-Nazi resistance was consolidated around the Home Army (Armia Krajowa, in Polish), an underground military organization loyal to the Free Polish government in London, which at its peak in mid-1944 included more than 300,000 soldiers. The Home Army was involved in sabotage, self-defense, and retaliation activities against the Germans. It also provided a great service to the Allies in the area of intelligence, obtaining information on German forces in the east and on the development of Germany’s secret V-1 and V-2 rockets. But the primary purpose of the Home Army was to prepare for the anticipated German military collapse and the liberation of the country. That moment seemed to be at hand in the summer of 1944.

The war in Europe was going well for the Allies in late July 1944. After a successful invasion of Normandy, American and British forces were moving through northern France toward Paris. In Italy, they were already well past Rome. On the Eastern Front, the Germans had suffered a series of devastating losses and seemed to be withdrawing hastily to the west. Soviet tanks had reached the eastern suburbs of Warsaw. It appeared that Warsaw would be the first Allied capital to be liberated from the Nazis. Broadcasts from Moscow called on the Polish people to rise up against the Germans. The Battle for Warsaw was about to begin. 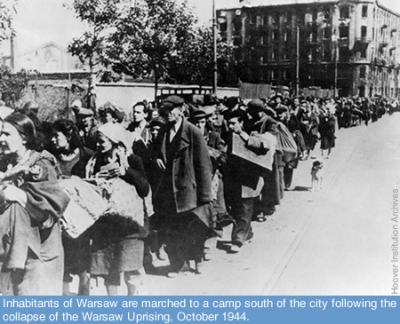 The Home Army offensive began in the afternoon of August 1, 1944. The uprising was expected to last about a week and was seen largely as a “mopping-up” operation. This turned out to be a miscalculation. The Germans decided to make a stand and defend “fortress” Warsaw as the Soviets halted their offensive. The uprising lasted not one but nine weeks, turning into the longest and bloodiest urban insurgency of the Second World War. Despite an initial success in liberating most of the city from the Germans, the tide soon turned against the Home Army. The strength of the two sides was disproportionately in favor of the Germans. The Home Army had at its disposal about 40,000 fighters—including 4,000 women—but no more than 10 percent of them were armed, mostly with light weapons. The Germans had roughly the same number of soldiers, but they were heavily armed, with tanks, artillery, and planes.

The civilian population suffered the most. On August 5–6 alone more than 40,000 inhabitants of the district of Wola—men, women, and children—were slaughtered. The mass killing was the work of the SS, police, penal battalions, and units of the Russian People’s Liberation Army, made up mostly of Russian collaborators. Altogether, the Polish losses during the uprising included 150,000 civilian dead and about 20,000 Home Army casualties. The German forces lost about 10,000. Fighting ceased on October 2 with the formal capitulation of the Home Army forces. The remaining civilian population of 650,000 was deported to a camp south of Warsaw. During the next three months, the Germans proceeded to demolish much of what was left of the city; when the Soviet troops “liberated” Warsaw in January 1945, Poland’s capital was a vast desert of hollow-shelled buildings and rubble.

The Warsaw Uprising failed because of lack of support from the Soviets and British and American unwillingness to demand that Stalin extend assistance to their Polish ally. The Soviet advance in Poland stopped on the Vistula River, within sight of fighting Warsaw. Stalin had broken off diplomatic relations with the Polish government in exile when, in the spring of 1943, it asked the International Red Cross to investigate the killing of thousands of Polish officers at Katyn. The Polish officers were prisoners of the Soviets following its 1939 invasion of Poland in collaboration with Hitler. The Soviets tried to pin the blame on the Germans and did not admit the April 1940 summary executions of at least 21,000 Polish prisoners until some 50 years after the fact.

Simply put, the Soviets had no interest in assisting the Home Army to liberate Warsaw. The Soviets were planning to annex the eastern half of Poland, first occupied in 1939 under the provisions of the Molotov-Ribbentrop agreement, and to exercise control over the rest. The Western Allies had secretly agreed to these points at the conference in Teheran in December 1943. The Poles suspected the worst from Stalin, but they had confidence that their British and American allies would keep Soviet ambitions in check. This turned out to be a complete miscalculation. When the Home Army requested airdrops of arms and supplies into Warsaw, the Soviets refused permission for Allied planes to land and refuel on airfields under their control. In the end, the Allies did virtually nothing. FDR even turned down Winston Churchill’s suggestion for a strongly worded joint request to Stalin for help. Not until the second half of September did massive airdrops become possible, but by that time it was already too late to save Warsaw.

The Price of Freedom

The Warsaw Uprising of 1944 is one of the decisive episodes in the history of Poland. Its defeat was a great national tragedy. The death and destruction that accompanied it were on an apocalyptic scale. Yet for the survivors, for those who had to live through the decades of communist oppression that followed Stalin’s victory over Hitler, the uprising was a source of pride and inspiration. Poles knew that freedom has a price, that great sacrifices have to be made to achieve it, and that the struggle does not always bring immediate and lasting results. The memories of the Home Army and of the uprising, of the 63 days of national solidarity, of dignity and freedom, became an important component of Polish historical consciousness, which helped the nation survive in the difficult years that followed. Indeed, it was this moral legacy of mass wartime resistance that blossomed again in the Solidarity movement of the 1980s and contributed to the collapse of the Soviet system.