In his recent review in The New York Review of Books of my book Getting Off Track, Roger Alcaly makes a very interesting point about the “too low for too long” hypothesis, according to which the Fed helped cause the housing boom. I hear that some policymakers at the Fed have been thinking the same way in recent weeks. If so, then when the Fed starts increasing the interest rate, it is likely to do so faster than in 2004-2005. But first consider Roger Alcaly’s argument.

Alcaly agrees that the Fed held the federal funds interest rate too low for too long in 2003-2005, but he emphasizes the slow measured pace at which the Fed raised the rate (once it started raising it) rather than the long considerable period during which it held the rate low at one percent. Alcaly puts it this way: “Taylor's general contention that low rates after 2003 encouraged the housing bubble is largely persuasive, although mostly for different reasons than he provides.” Alcaly points out that “the Fed raised rates only in increments of a quarter of a percentage point…. Fourteen of these "measured" rate rises were attributable to Greenspan and three to Bernanke, who replaced him in February 2006. Raising interest rates so slowly and steadily promoted excessive risk-taking, and should have concerned Greenspan, according to his stated views."

Can one assess quantitaively whether the measured pace period was more to blame than the considerable period period? In my research, I use the deviations between the actual federal funds rate and the Taylor rule to measure whether rates were “too low for too long” as shown in the chart below. This same approach provides a metric to determine whether the deviations were larger before or after the interest rate started rising, and thereby assess which period was more to blame for the “too low rates.”

I have drawn in a red line in the chart below to indicate when the Fed started increasing the funds rate. Note that there is a big gap on both sides of the line. The cumulative deviations to the right of the red line (13.9 percentage points) are indeed sizeable as Alcaly argues. However, they are slightly smaller than the cumulative deviation on the left of the red line (15.5 percentage points). So at least by this measure there is no reason to be more concerned about a repeat of the “measured pace” period as there is a repeat of the “considerable period” period. 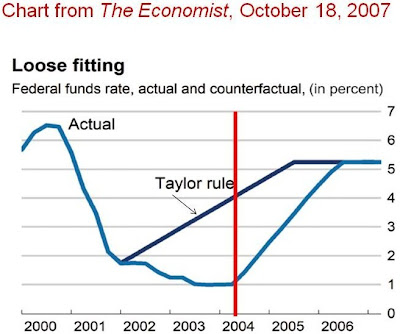