Can We Stop The Clock? Replacing Seat Time With Mastery

Every student who has ever watched the clock during class knows that seat time does not equal learning. The impact of COVID on student academic progress makes it more important than ever to refocus on how well students master the learning standards.  The good work of several educators show us how this can be done. The Hoover Education Success Initiative (HESI) hosted a discussion asking "Can We Stop the Clock? Replacing Seat Time with Mastery" on Wednesday, September 22, 2021. In case you missed it, watch the talk and read the recap here.

The Hoover Education Success Initiative (HESI) hosted the second session in a six-part series that explores how public education can improve amidst the disruption of in-person instruction caused by COVID-19-inspired restrictions.

The session, entitled “Can We Stop the Clock? Replacing Seat Time with Mastery,” featured Macke Raymond, distinguished research fellow and program director in education at the Hoover Institution; Chad Gestson, superintendent of the Phoenix Union High School District; and Don Shalvey, CEO of San Joaquin A+. The program was moderated by Stephen Bowen, deputy director for state leadership at the Council of Chief State School Officers.

Raymond began the discussion by describing the Carnegie Unit, a system that measures the amount of time a student has studied a particular subject in school and awards corresponding course credit. As Raymond explained, the system, founded in 1906 by industrialist and philanthropist Andrew Carnegie, was originally implemented at the college level but then was adopted and standardized in high schools across the United States to demonstrate whether students were prepared for postsecondary education. She argues that the Carnegie Unit is not a valuable metric, because it measures inputs (seat time) as opposed to outputs (mastery over a subject). She recommends that high schools coordinate with postsecondary institutions to assess student achievement on the latter basis. However, she maintains that such a revolutionary change in education could be more easily achieved by founding new schools instead of reforming existing ones.

Gestson affirmed Raymond’s argument about the need to measure students’ college readiness by mastery of subject matter. To this end, he explained how the district he leads has created a diverse portfolio of schools tailored to students’ interests and preferred approaches to learning. He maintains that mastery isn’t necessarily always achieved by spending significant amounts of time in the classroom with a constrained focus on a particular subject. Instead, classroom teaching can be supplemented by extracurricular activities such as career-oriented internships. As well, schools can provide diverse course offerings that combine complementary subject matter, such as art and science and music and mathematics. Getston emphasized that transitioning to modes of learning require broad support from the community, especially postsecondary institutions that will ultimately have to work with high schools to matriculate students learning in an alternative credit system. In addition, schools will also need to attain the cooperation of the business community, including the allowance of flexible work arrangements to parents whose children’s time at school wouldn’t necessarily align with a traditional 9 am to 5 pm work schedule.

Don Shalvey asserted that high schools need to collaborate more closely with higher-education institutions, especially community colleges, to set students on a clear pathway for meaningful degrees and career certifications. He also underscored that secondary schools should align student outcomes with the needs of their communities. As an example, he explained that a focus of his organization is emphasizing instruction and career preparedness in agriculture, because of the centrality of that industry to the economic life of California’s San Joaquin Valley.

All participants agreed that the current moment presents a unique opportunity to make substantial reforms in education, given the strong appetite for change among parents whose children have experienced significant amounts of learning loss during the course of the pandemic.

Don Shalvey, CEO, San Joaquin A+, Panelist:  Don Shalvey is the founding CEO of San Joaquin A+ and former deputy director for K–12 Education at the Bill & Melinda Gates Foundation.   In 1992, as superintendent of the San Carlos School District, Shalvey sponsored the first charter school in California. Widely recognized as a leader in public education and the charter school sector, he was the founder and CEO of Aspire Public Schools.

Margaret “Macke” Raymond, Program Director for Education, Hoover Institution, Panelist:  Margaret “Macke” Raymond is the Program Director for Education at the Hoover Institution, guiding the expansion of education research, policy analysis and engagement at the institution.  She is also the founder and director of the Center for Research on Education Outcomes (CREDO) at Stanford University, which studies efforts to improve student results in US K-12 education.

Stephen Bowen, Council of Chief State School Officers, Moderator:  Stephen Bowen serves as the deputy executive director for state leadership at the Council of Chief State School Officers (CCSSO). In his role, he directs the activities of the membership services, leadership academy, and data and information services teams. Bowen oversees the development and implementation of programs and services designed to support the leaders and staff of state education agencies. 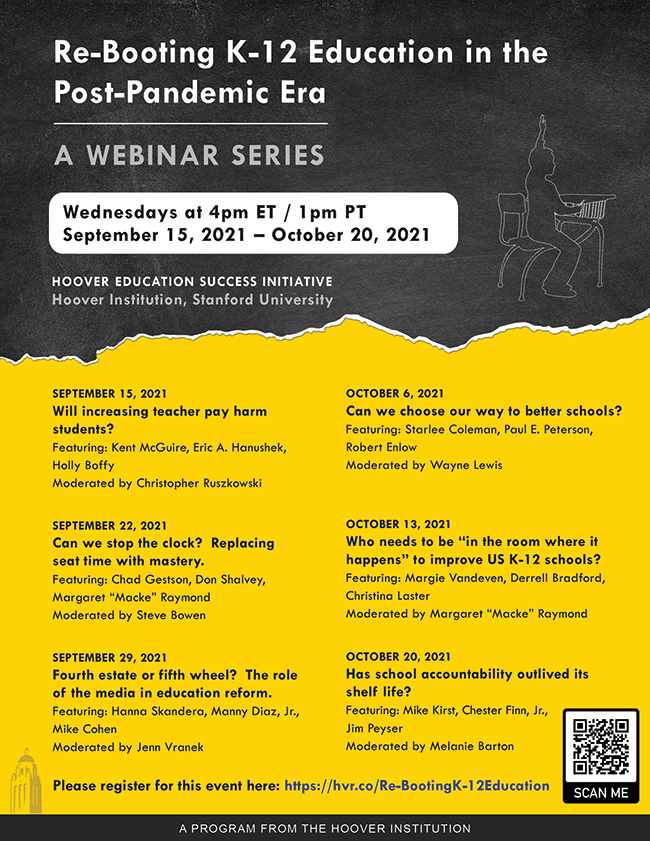