Hoover fellows and other distinguished experts representing multiple research disciplines described their findings in a newly released report, Digital Currencies: The US, China, and the World at a Crossroads, before a Stanford community audience in the Hoover Institution’s Hauck Auditorium on Friday, March 4. Wednesday, March 9, 2022 4 min read 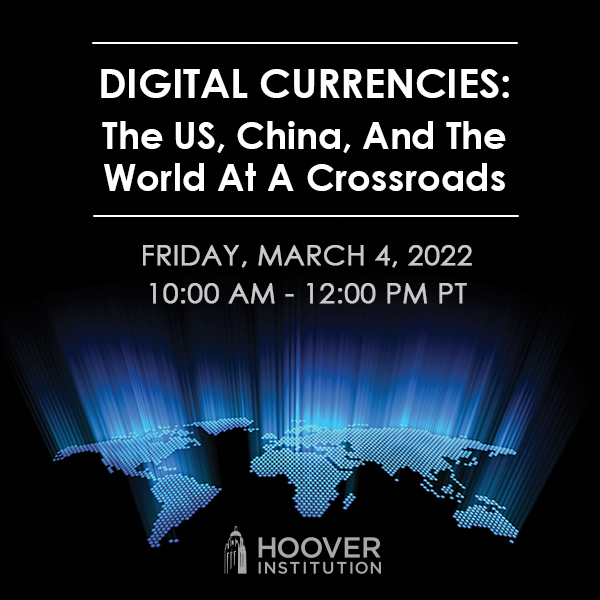 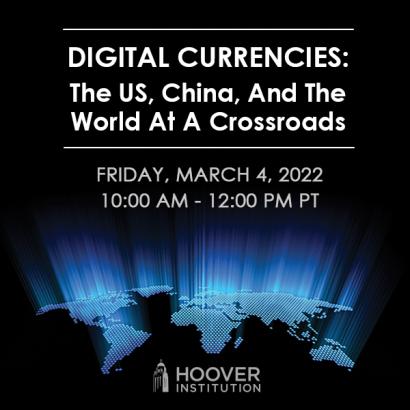 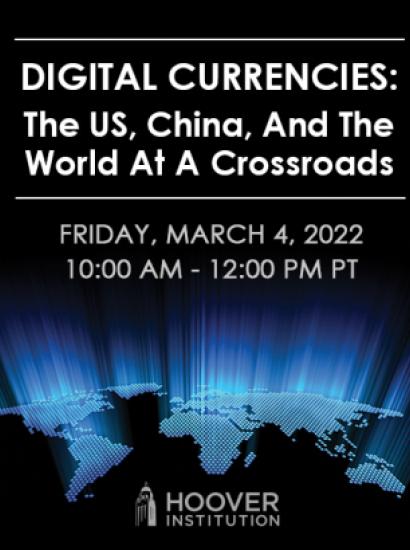 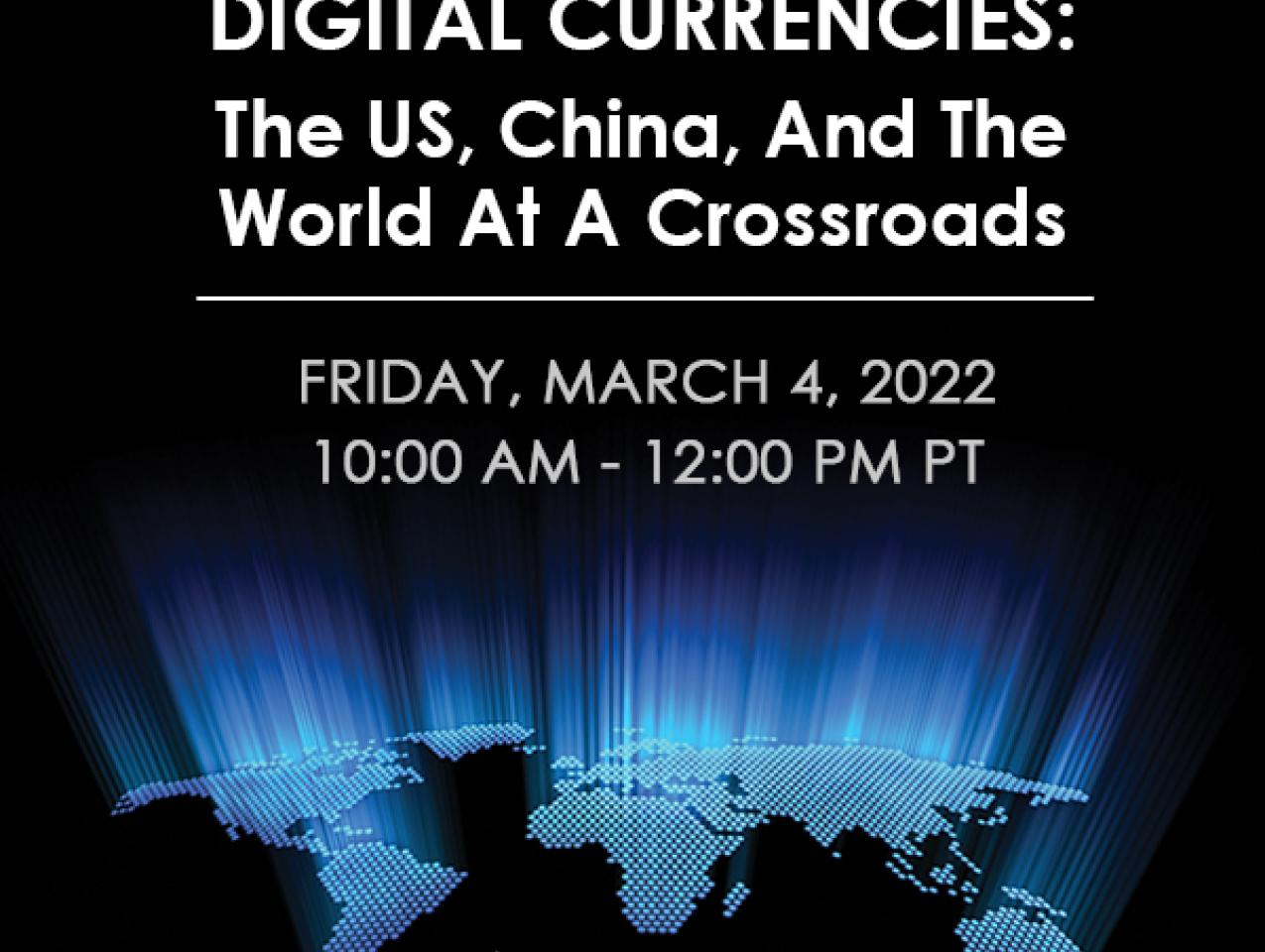 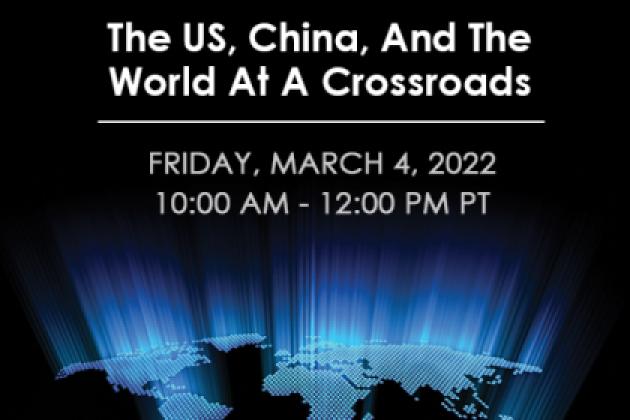 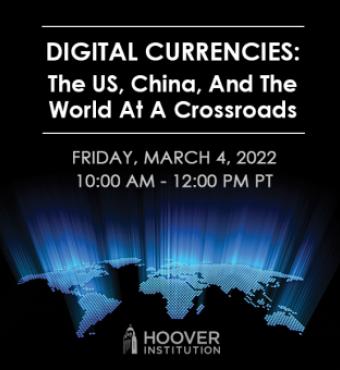 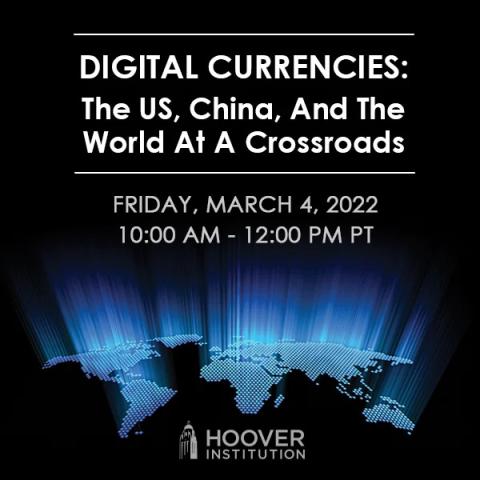 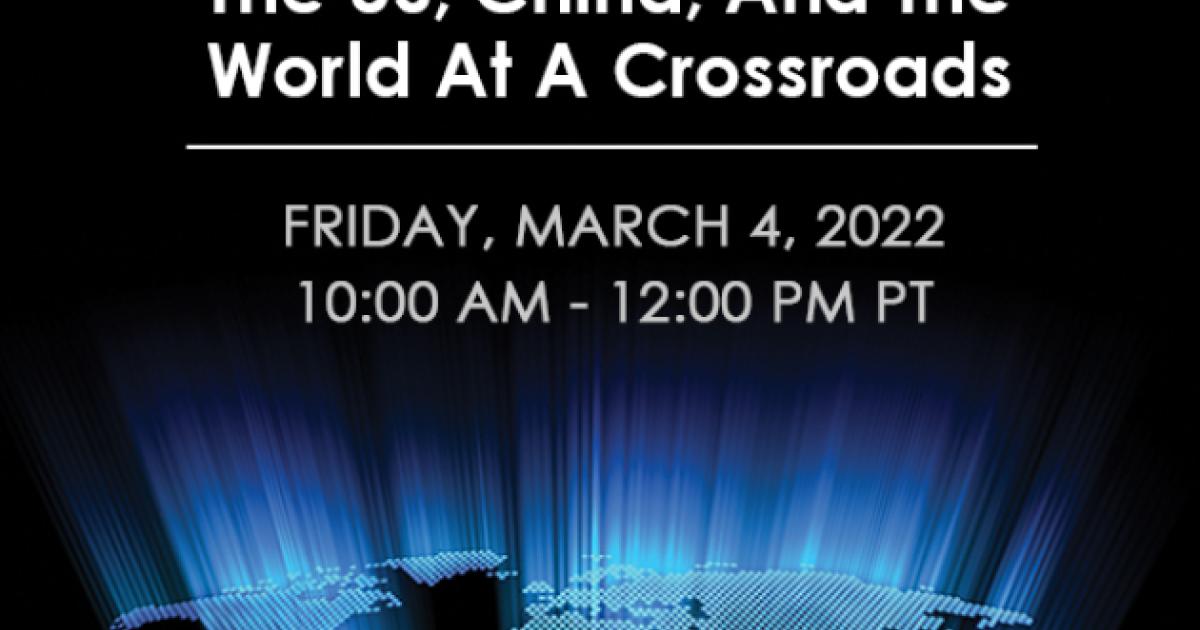 Hoover Institution (Stanford, CA) – Hoover fellows and other distinguished experts representing multiple research disciplines described their findings in a newly released report, Digital Currencies: The US, China, and the World at a Crossroads, before a Stanford community audience in the Hoover Institution’s Hauck Auditorium on Friday, March 4.

Co-edited by senior fellows Darrell Duffie and Elizabeth Economy, the report provides broad recommendations to the US government concerning the growing use of the digital yuan, or e-CNY, China’s Central Bank Digital Currency (CBDC); its possible geopolitical and geoeconomic implications; and how the United States can revive its leadership in shaping principles and standards in the global digital economy.

For more information on the event, click here, or watch the discussion below:

The distribution and circulation of e-CNY is managed by a two-tier system. The People’s Bank of China (PBOC) functions at the top (distribution) layer, and on the second (circulation) layer are commercial banks, payment service providers, and telecom operators.  All transactions made through the bottom layer are processed directly into the PBOC’s central ledger, which is the only entity that can trace the flow of e-CNY money throughout the entire economy and has knowledge of the relationship between a user’s digital wallet address and physical identity. People holding e-CNY can pay through digital wallets enabled by ecommerce applications, such as Alipay or WeChat Pay, or via a hard wallet system that is underpinned by digital currency chip cards. The latter supports offline transactions when Bluetooth is enabled on both the sender’s and receiver’s devices.

The e-CNY’s privacy policy is governed by the PBOC under the doctrine of “managed anonymity.” However, if the PBOC (which also oversees China’s corporate social credit score system) detects suspicious activity, it can report its findings to China’s various state security agencies.

China may have several economic motives for issuing digital currency. First, widespread use of digital currency could allow the PBOC to track economic data and implement precisely targeted monetary policies. Second, it could allow the government to better understand how wealth is distributed and thus enact fiscal policies that can more efficiently facilitate welfare payments to lower-income Chinese citizens.

The creation of more efficient governance may lend prestige to the Communist Party leadership of Xi Jinping, who in speeches and statements touts China as a model of modern, path-breaking governance and the United States as an outdated democracy and also-ran superpower.

The expanded deployment of e-CNY may also strengthen China’s surveillance state and sharpen Xi’s despotic rule. The Communist Party could be able to ensure compliance of the most restless of Chinese citizens. Additionally, the e-CNY could make it easier for authorities to trace money flows within patronage networks, thus making rival elites vulnerable and less able to defy Xi’s political will.

In the second panel, participants explained how the launch of e-CNY meant China is becoming more deeply integrated into cross-border payment systems and is shaping the international principles and standards on the exchange of digital currencies.

The United States has largely fallen behind China in establishing international principles and standards in this area, in part because America’s banks and fintech sector have either withdrawn or have not expanded their presence in parts of the world that lack sophisticated financial systems. Accordingly, it would be beneficial for the United States not only to lead in the innovation of digital currencies, but perhaps to forge agreements with China and other nation-states that would make cross-border payment systems more seamless without challenging each other’s rules on how digital currency data is managed in-country.

Conversely, China is currently testing multi-currency transactions with countries with which it has existing relationships through the Belt and Road Initiative (BRI) and is building out a digital currency network called the m-CBDC bridge (which is linked to Thailand, Hong Kong, and the United Arab Emirates), enabling banks to hold and process transactions in any of the participating CBDCs (including the e-CNY) and convert them back into their own CBDC.

Alternative cross-border payment systems, such as the China Interbank Payment System, may enable China and other states to avoid sanctions imposed by the SWIFT (Society of Worldwide Interbank Financial Telecommunication) system of payments, in which the United States holds enormous clout given that the US dollar remains the world reserve currency.

The e-CNY could also be an instrument that is capable of being disrupted by the Chinese government. If Beijing is contemptuous of views expressed by a foreign individual or firm conducting business in China, it can easily shut down its ability to make payments.

Panel 3: Challenges and Opportunities for US Digital Currencies

In the final panel, participants asserted that because of the tranche of SWIFT sanctions imposed on Russia for its invasion of Ukraine, China will likely accelerate its ambitions to expand use of e-CNY and build an alternative global structure for cross-border payments in order to inoculate itself from possible punitive measures in the future.

The scholars stressed that, although time is not on the side of the United States to challenge the e-CNY, the costs and benefits of deploying American digital currencies (CBDC or private sector) need to be analyzed thoroughly.

The private sector has a higher capacity to innovate in the digital currency arena. However, the US government thus far has not provided clear regulatory guidelines in which fintech firms can legally deploy products such as stablecoin for international circulation.

Nevertheless, the government should still set high standards for companies operating in this space. Regulators should protect individual rights to privacy in making transactions but also ensure that the financial system can’t be exploited by actors engaged in unlawful activity. Otherwise, the United States’ ability to enforce sanctions would be seriously undermined.

The US government should conduct research on CBDC technology, although it is not yet clear that it should design and deploy a digital US dollar. A government-issued digital currency must be accessible to everyone in the national economy. If a digital currency were to become the dominant medium of exchange, large numbers of people who don’t have bank accounts and who rely on the exchange of paper money may be excluded from economic life.

Click here to read the entire report, Digital Currencies: The US, China, and the World at a Crossroads.