Research shows the failure to rescue Lehman did not trigger the fall panic.

Many are calling for a 9/11-type commission to investigate the financial crisis. Any such investigation should not rule out government itself as a major culprit. My research shows that government actions and interventions -- not any inherent failure or instability of the private economy -- caused, prolonged and dramatically worsened the crisis. 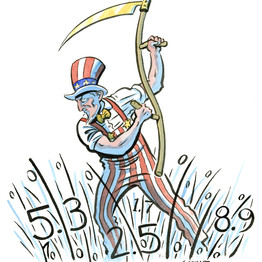 The classic explanation of financial crises is that they are caused by excesses -- frequently monetary excesses -- which lead to a boom and an inevitable bust. This crisis was no different: A housing boom followed by a bust led to defaults, the implosion of mortgages and mortgage-related securities at financial institutions, and resulting financial turmoil.

Monetary excesses were the main cause of the boom. The Fed held its target interest rate, especially in 2003-2005, well below known monetary guidelines that say what good policy should be based on historical experience. Keeping interest rates on the track that worked well in the past two decades, rather than keeping rates so low, would have prevented the boom and the bust. Researchers at the Organization for Economic Cooperation and Development have provided corroborating evidence from other countries: The greater the degree of monetary excess in a country, the larger was the housing boom.

The effects of the boom and bust were amplified by several complicating factors including the use of subprime and adjustable-rate mortgages, which led to excessive risk taking. There is also evidence the excessive risk taking was encouraged by the excessively low interest rates. Delinquency rates and foreclosure rates are inversely related to housing price inflation. These rates declined rapidly during the years housing prices rose rapidly, likely throwing mortgage underwriting programs off track and misleading many people.

Other government actions were at play: The government-sponsored enterprises Fannie Mae and Freddie Mac were encouraged to expand and buy mortgage-backed securities, including those formed with the risky subprime mortgages.Adjustable-rate, subprime and other mortgages were packed into mortgage-backed securities of great complexity. Rating agencies underestimated the risk of these securities, either because of a lack of competition, poor accountability, or most likely the inherent difficulty in assessing risk due to the complexity.

Government action also helped prolong the crisis. Consider that the financial crisis became acute on Aug. 9 and 10, 2007, when money-market interest rates rose dramatically. Interest rate spreads, such as the difference between three-month and overnight interbank loans, jumped to unprecedented levels.

Diagnosing the reason for this sudden increase was essential for determining what type of policy response was appropriate. If liquidity was the problem, then providing more liquidity by making borrowing easier at the Federal Reserve discount window, or opening new windows or facilities, would be appropriate. But if counterparty risk was behind the sudden rise in money-market interest rates, then a direct focus on the quality and transparency of the bank's balance sheets would be appropriate.

Early on, policy makers misdiagnosed the crisis as one of liquidity, and prescribed the wrong treatment.

To provide more liquidity, the Fed created the Term Auction Facility (TAF) in December 2007. Its main aim was to reduce interest rate spreads in the money markets and increase the flow of credit. But the TAF did not seem to make much difference. If the reason for the spread was counterparty risk as distinct from liquidity, this is not surprising.

Another early policy response was the Economic Stimulus Act of 2008, passed in February. The major part of this package was to send cash totaling over $100 billion to individuals and families so they would have more to spend and thus jump-start consumption and the economy. But people spent little if anything of the temporary rebate (as predicted by Milton Friedman's permanent income theory, which holds that temporary as distinct from permanent increases in income do not lead to significant increases in consumption). Consumption was not jump-started.

A third policy response was the very sharp reduction in the target federal-funds rate to 2% in April 2008 from 5.25% in August 2007. This was sharper than monetary guidelines such as my own Taylor Rule would prescribe. The most noticeable effect of this rate cut was a sharp depreciation of the dollar and a large increase in oil prices. After the start of the crisis, oil prices doubled to over $140 in July 2008, before plummeting back down as expectations of world economic growth declined. But by then the damage of the high oil prices had been done.

After a year of such mistaken prescriptions, the crisis suddenly worsened in September and October 2008. We experienced a serious credit crunch, seriously weakening an economy already suffering from the lingering impact of the oil price hike and housing bust.

Many have argued that the reason for this bad turn was the government's decision not to prevent the bankruptcy of Lehman Brothers over the weekend of Sept. 13 and 14. A study of this event suggests that the answer is more complicated and lay elsewhere.

While interest rate spreads increased slightly on Monday, Sept. 15, they stayed in the range observed during the previous year, and remained in that range through the rest of the week. On Friday, Sept. 19, the Treasury announced a rescue package, though not its size or the details. Over the weekend the package was put together, and on Tuesday, Sept. 23, Fed Chairman Ben Bernanke and Treasury Secretary Henry Paulson testified before the Senate Banking Committee. They introduced the Troubled Asset Relief Program (TARP), saying that it would be $700 billion in size. A short draft of legislation was provided, with no mention of oversight and few restrictions on the use of the funds.

The two men were questioned intensely and the reaction was quite negative, judging by the large volume of critical mail received by many members of Congress. It was following this testimony that one really begins to see the crisis deepening and interest rate spreads widening.

The realization by the public that the government's intervention plan had not been fully thought through, and the official story that the economy was tanking, likely led to the panic seen in the next few weeks. And this was likely amplified by the ad hoc decisions to support some financial institutions and not others and unclear, seemingly fear-based explanations of programs to address the crisis. What was the rationale for intervening with Bear Stearns, then not with Lehman, and then again with AIG? What would guide the operations of the TARP?

It did not have to be this way. To prevent misguided actions in the future, it is urgent that we return to sound principles of monetary policy, basing government interventions on clearly stated diagnoses and predictable frameworks for government actions.

Massive responses with little explanation will probably make things worse. That is the lesson from this crisis so far.

Mr. Taylor, a professor of economics at Stanford and a senior fellow at the Hoover Institution, is the author of "Getting Off Track: How Government Actions and Interventions Caused, Prolonged and Worsened the Financial Crisis," published later this month by Hoover Press.