Hoover fellow Robert Conquest reviews a new book, The Commissar Vanishes, that documents Soviet doctoring of photographs, paintings, and even sculpture. How the Communists cropped history. 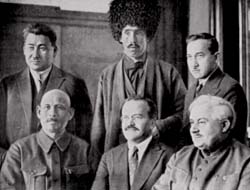 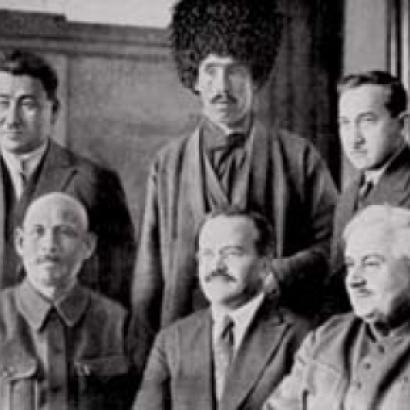 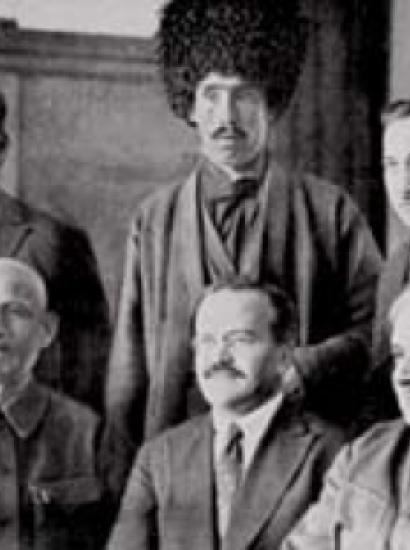 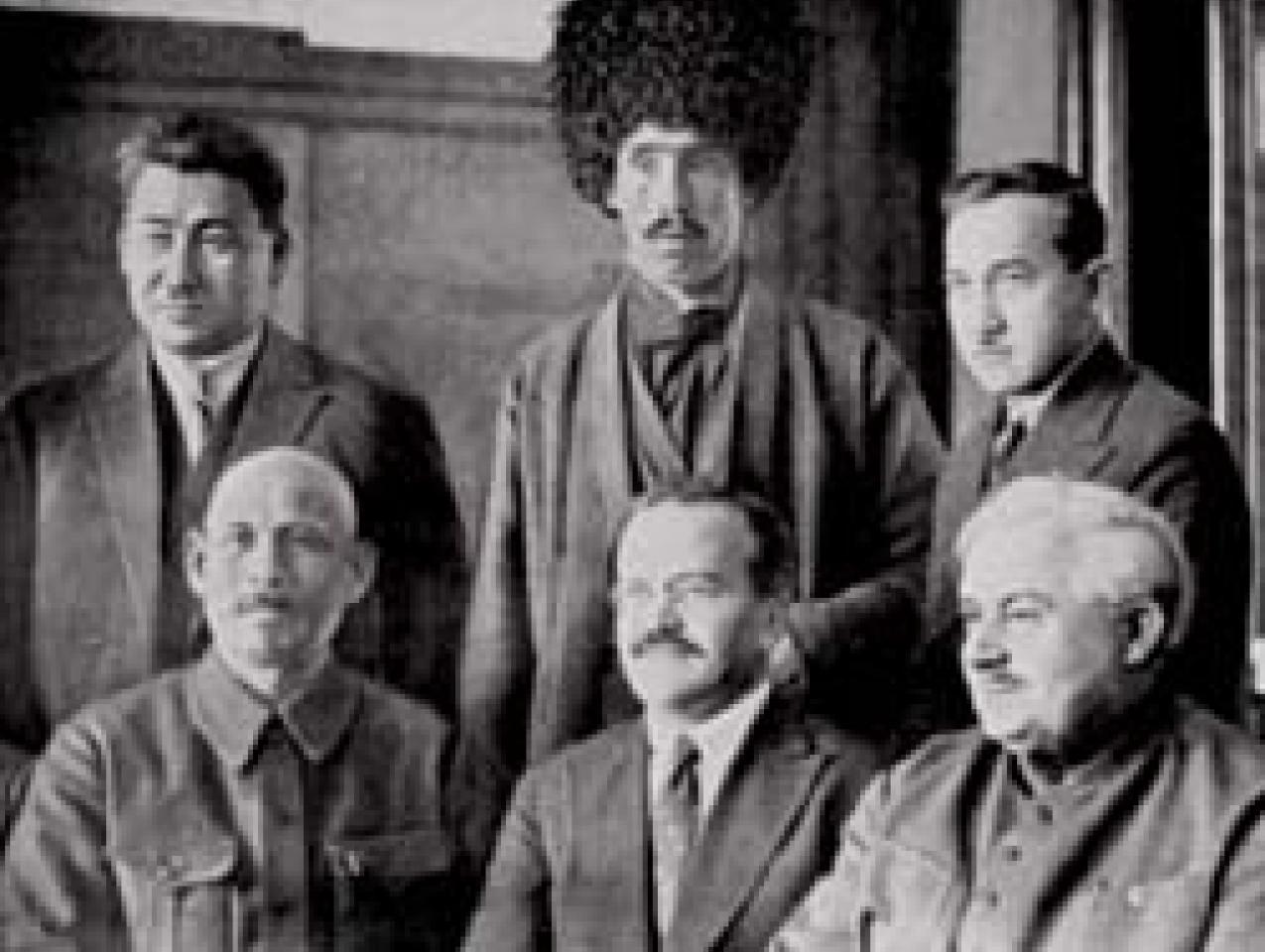 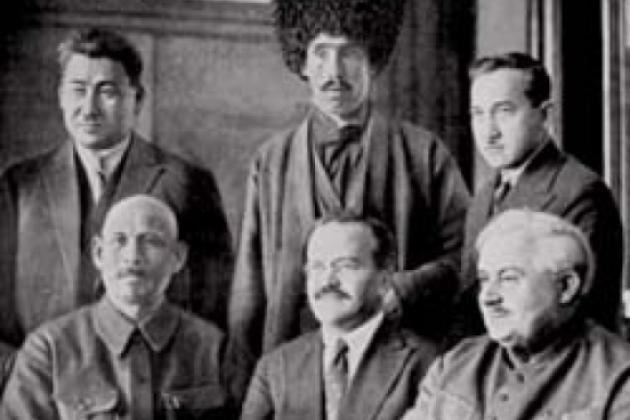 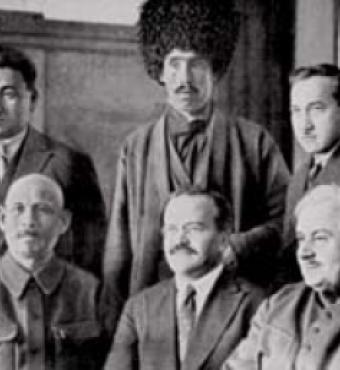 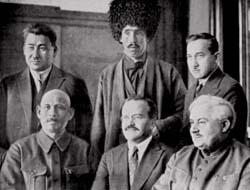 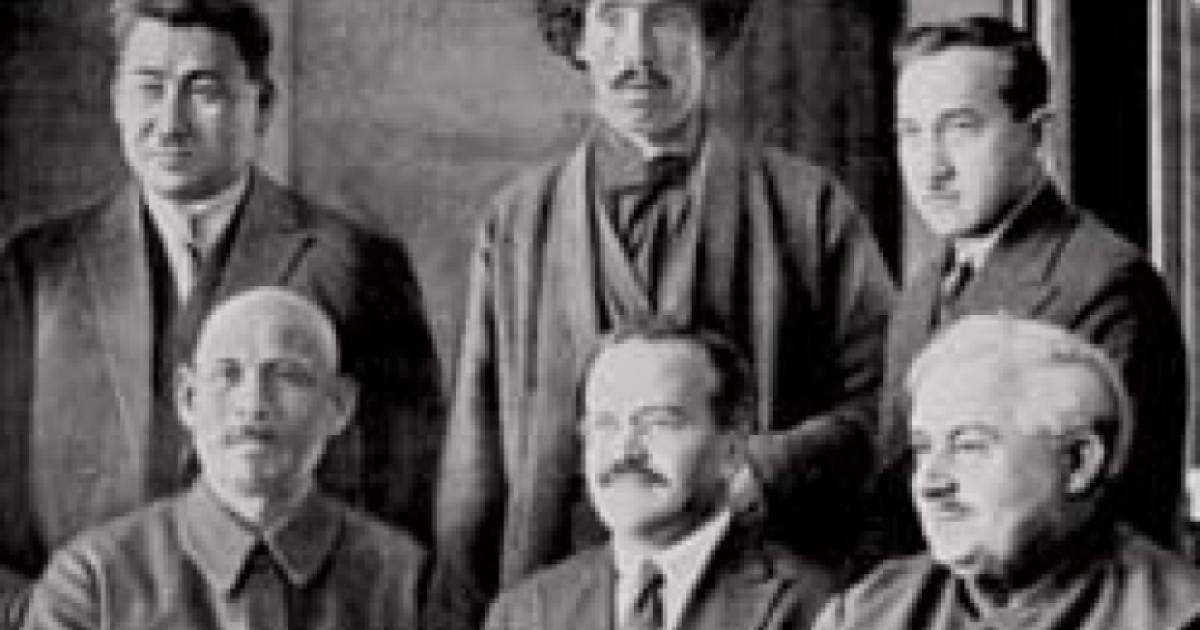 Dead bodies were a common product of the Stalinist system. Minds did not do well either. They had to endure a continuous barrage of untruth. It can be argued that the Soviet Union's main negative characteristic--with plenty to choose from--was falsification. One finds it right from the start. But in the 1930s, after the disastrous failure of collectivization, the disjunction was complete. Two different Soviet Unions existed: the official one of a flourishing and happy country (beset, though, by traitors) and the reality of poverty, squalor, terror, and a crushed population.

The prettier of these pictures was compulsory in all the Soviet media and deniable by citizens at the cost of their liberty or lives. It was also conveyed to the outer world as far as possible, especially to a stratum of the Western intelligentsia, many of whom were taken in by Soviet representatives in the West who officially denied the very existence of the 1933 famine, let alone its causes.

The most falsified area of all was history, especially the history of the revolution itself. To the connoisseur of falsification, there is something especially striking about the way in which the Soviet visual images were massively and pervasively amended. New versions of old photographs, designed to remove unpersons from the record, are the main theme of David King's The Commissar Vanishes: The Falsification of Photographs and Art in Stalin's Russia. A photographic expert, King has made the pursuit of Soviet falsification something of a hobby, and, as is often the case with this sort of amateur devotion, he has scored a striking success with this selection from his materials.

With modern technology, visual revisionism would no doubt be simple. We thus have to admire the skill of more primitive artists who created what must be seen, in their context, as minor masterpieces. Along with other interesting material, King has given us two different types of visual unpersoning: first, a number of crudely blacked-out faces in books; second, and far more striking, the actual faking of photographs to remove unwanted figures. This is his central theme, and it should be overwhelmingly instructive (to the as yet uninstructed) about Stalinism.

Photographic revisionism started under Lenin, the earliest Soviet phase. We get a splendid photograph of a demonstration in 1917 in which a sign over a shop reading Watches: Gold and Silver in the original becomes Struggle for Your Rights in the duplicate. But this was small stuff compared with what came to be normal in the 1930s and beyond.

Favorites include the picture of Stalin in exile in Siberia in which Lev Kamenev, in the later versions, has been turned into a bush; one of Lenin in 1917 addressing a crowd with Trotsky and Kamenev disappearing in the corrected version; and one of Stalin and Nikolai Yezhov strolling along that great slave labor project, the Moscow-Volga Canal, where Yezhov becomes a stretch of water. We may note that this was also the practice in Mao's China, though less creatively, where we see succeeding versions of a Politburo photograph with unfilled gaps appearing. In the Russian case, unpersons are not simply blanked out or merged into other objects but are shifted around to fill such gaps.

King, ranging into the sphere of paintings and posters, notes that to change an existing painting in suitable fashion was more difficult than changing its photographic equivalent. He furnishes a fine example of Stalin and others looking over the White Sea–Baltic Canal; the painting originally included then NKVD chief Genrich Yagoda, painted over to become a jacket hanging on a railing.

Two Soviet types of people were removed from the visual record. The first group, people like Kamenev and Trotsky, had their revolutionary pasts destroyed (and were, of course, murdered) but continued in Soviet history in new roles as terrorist agents of Hitler. They were thus ungoodpersons rather than unpersons proper, reemerging in the pictorial record only in political cartoons (one of which King has reprinted in which Nikolai Bukharin, Trotsky, and others figure as mad dogs on Nazi leashes).

The second category, which also figures in King's book, includes those who simply disappeared after 1930 and were not heard of again for decades: Kossior, Rudzutak, Eikhe, Chubar, Postyshev, Yezhov--all members or candidates of Stalin's own Politburo. One of the most extraordinary things about Western admirers of the Soviet system, those who were also supposedly informed students of the Soviet scene, is that they somehow did not notice this phenomenon. It is as if--exactly as if--British Americanists had simply failed to register the disappearance of half the U.S. cabinet and most of the U.S. Joint Chiefs of Staff. One of King's photographs has in its first version the figure of the Indian communist M. N. Roy, who later became a strong anti-Stalinist; he is missing in the second version.

Of course, falsification abounds in history, from ancient Egyptian stelae registering defeats as victories through Napoleon's Moniteur reporting Trafalgar as just some ships lost in a storm. We can even find odd cases of unpersoning. After a posthumous damnatio, Roman emperors' names were hacked out of inscriptions (and in one case, at least, the third G of AVGGG, signifying the three Augusti, now reduced to two, was chipped away for good measure). Still, such measures were a rarity. Nor is it exactly a parallel, though worth our attention, when we find two versions of a print by Peter Street from the 1660s, otherwise identical, in which the head of the Protector, Richard Cromwell, has been replaced in the later one by that of Charles II. But this was no more than a labor-saving device by a busy producer; Richard Cromwell, far from being removed from history or from life, died more than fifty years later in retirement at Hertfordshire. More generally, George Orwell noted in Nineteen Eighty-Four that the newspapers and history books of Oceania's past were "colored and biased" but that "falsification of the kind that is practiced today would have been impossible."

One baffling notion, still to be found among academic students of the Soviet period, is the idea that documents are, per se, a reliable source of information. These photographs are, of course, documents, and much Soviet typed or printed material is at the same level of credibility. (If only one of the Stalinist revisions had survived, it would doubtless be accepted by researchers.) It is true that nonvisual documents have more leeway because they are usually invented out of whole cloth rather than being revisions of earlier material. But not always. The minutes of a Politburo meeting in 1918 had to be retrospectively altered to bring Stalin's attitude on the Brest-Litovsk treaty closer to Lenin's. But such things as the 1939 census or the German responsibility for Katyn were just straightforward falsifications. Indeed, if we rely on the documents, then we must still believe that Stalin's old comrade Sergo Ordzhonikidze died a natural death in February 1937. The only document, a postmortem signed by the commissar for health and three other leading doctors, calls it a heart attack. The true story, long since accepted in Moscow, that it was suicide or murder (at any rate, a gunshot), depends on less "rigorous" sources.

The rehabilitation of Stalinist victims (others had to wait for a generation) began in the late 1950s under Khrushchev. Even then, some of those deleted from the photographs were still given fake death dates because the secret NKVD records had also been falsified to transfer them to a later period.

This reviewer is able to add a coda to the whole phenomenon. In the mid-1960s, some of those shot after the Bukharin trial in 1938 were rehabilitated--though a number were not (which in itself is absurd because all their confessions linked them in a single close-knit conspiracy). The question arose of rehabilitating Faizulla Khodzhayev, the Uzbek communist leader who had been one of the victims. Meanwhile, a local party history reprinted (well, not quite) a photograph taken in the 1920s that showed Khodzhayev sitting in the front row. In 1964, he had not yet been formally rehabilitated, but those in the party machinery were plainly aware that the procedures were afoot. Thus, to blank him out altogether would be political shortsightedness, whereas to put him in would be to anticipate official action. The decision was to print the photograph with one small change--the greater part of Khodzhayev's face was concealed behind a large beard, which had not appeared in the original. (We chance to know from the literature that Khodzhayev never had a beard.) All provide a further insight into those alien mental processes.

The photo fixer's skills were less and less in demand, though still exercised in small matters for some time. In the 1970s, Spaceflight, the organ of the British Interplanetary Society, published two versions of two Soviet photographs of cosmonaut groups. In each case, the later example showed a cosmonaut hitherto in good standing faded into a pillar or, photographed on an airplane, into an airplane window.

But this was a last gasp. And the missing cosmonauts evidently suffered no harm beyond dismissal. By the late 1980s, even the earlier fakes had fallen into desuetude. And now it is all over, or so we may hope.

Reprinted from the Los Angeles Times Book Review, January 4, 1998. Used with permission.
Available from the Hoover Press is History, Humanity, and Truth: The 1993 Jefferson Lectures in the Humanities, by Robert Conquest. Also available is Patterns of Deprivation in the Soviet Union under Brezhnev and Gorbachev, by Mervyn Matthews. To order these publications, call 800-935-2882.