In a recent blog post Ben Bernanke criticized the use of rules-based monetary policy in which the central bank endeavors to set the instruments of policy in a predictable rule-like manner.

The post attracted a lot of attention, but this is not the first time Ben has criticized rules-based monetary policy. Soon after he joined the Federal Reserve Board he gave his “constrained discretion” speech in 2003 criticizing such policies, focusing his criticism on Milton Friedman’s well-known rule for the money supply. His recent criticism of rules-based policy focuses on the Taylor rule. It is similar to his criticism in 2010 in a major speech before the American Economic Association, which I responded to here in The Wall Street Journal, and it is an elaboration of his talk at a recent IMF conference where I also gave a talk and we had a little debate. In his 2003 speech Ben advocated “constrained discretion” as an alternative to rules-based policy, and judging from his talk at the IMF conference, “constrained discretion” is still his view of how policy has been conducted in recent years and how it should be conducted in the future.

Ben’s blog post starts off with a nice summary of the Taylor rule from my 1993 paper. The summary is accurate except for the suggestion that I put the rule forth simply as a description of past policy when in fact the rule emerged from years of research on optimal monetary policy. In his IMF talk he also quotes at length from that 1993 paper to demonstrate, perhaps in a gotcha sense, that I did not think policy could be conducted mechanically.

I never thought that policy should be mechanical and still don’t. Some people say that I want to chain the Fed to an algebraic formula, but that is not what I have written or said. Having a rules-based policy for your instruments does not mean you mechanically follow a formula. It means you have an explicit strategy for setting the instruments. The same is true for my recommendation regarding legislation.

In his blog post Ben then goes on to critique “Taylor’s critique of Fed Policy.” But he defensively focuses entirely on the period when he was on the Fed Board. In fact, as I described in my recent IMF talk, my critique of the Fed goes back to the terrible economy of the 1970s when, much as in recent years, the Fed was “highly discretionary and interventionist” with “lofty goals but no consistent strategy.” And that critique became praise when Fed policy changed and became “more focused, more systematic, more rules-based” in the 1980s, 1990s and until recently with excellent results. Many economists have written about this change including Rich Clarida, Jordi Gali and Mark Gertler.

Ben’s defense of the 2003-2005 period (the “too low for too long” period when he was on the Board) is based on the idea that those rates could be justified by changing the Taylor rule coefficients or changing the inputs in a way that suggested that interest rates were not too low, as shown in his Figure 2. This is the same argument used in his 2010 criticism when he considered other changes in the Taylor rule, and my response to that earlier criticism applies directly to his recent criticism.

It should be obvious to anyone that if you double the size of a coefficient in a policy rule (as Ben does) that you can radically alter the results. If Ben is suggesting that the Fed was secretly using such a rule in those years (unbeknownst to people outside the Fed at the time), then that is a good reason to make public such rules as legislation in Congress would require.

Despite Ben’s own reinterpretation of the Taylor rule history, many people besides me have shown that rates were too low then, including Marek Jarocinski and Frank Smets, George Kahn, and work at the OECD by Rudiger Ahrend. Figure 1 from Bill Poole when he was on the FOMC shows this clearly as does this old graph from the Economist. In his talk at the IMF conference where Ben and I presented, Hyun Shin presented a convincing graph showing the too low rates globally. In fact, the changes in policy are so large that they can be illustrated without a specific rule. 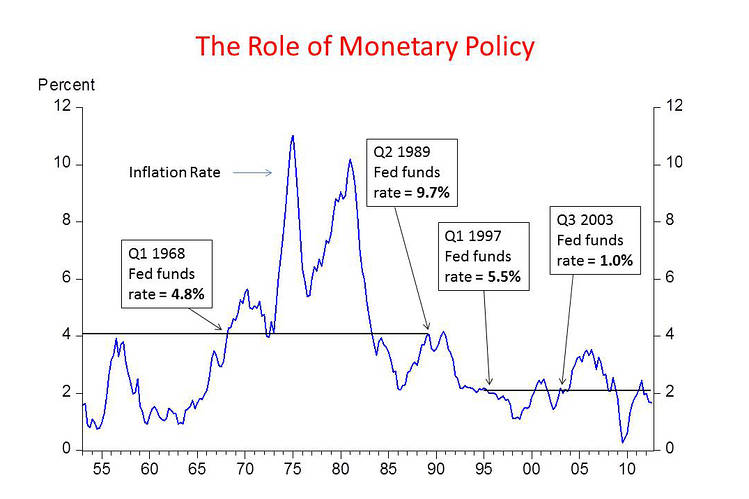 Ben lists a number of other criticisms of policy rules. He says that there are differences of opinion about the size of the output gap. That’s certainly true, but it is no more of a problem for rules-based policy than for discretion—constrained or otherwise—where some estimates of the economy’s potential or gap are nearly universally needed.

He says that it is problematic to assume that the equilibrium real federal funds rate is 2%. Well that has been what the FOMC members have been saying for years, and according to the dots they are still pretty close to that in their long run estimate of the nominal funds rate around 3.75% and an inflation target of 2 %. But if they want to change, that can easily be incorporated into a rules based framework as Chair Janet Yellen has recently mentioned in San Francisco.

Ben says that a policy rule for the interest rate gives no guidance when the reading on the rule is negative. I completely disagree with that. The zero bound is not a new problem. Policy rule design research took that into account decades ago. The default was to move to a stable money growth regime not to massive asset purchases. And back in the year 2000 David Reifschneider and John Williams proposed another rules-based approach to deal with the problem.

Ben says there is no agreement on how much to react to changes in output or inflation. That is not quite right as there is much agreement about the so called “Taylor principle” that the reaction of the interest rate to inflation should be greater than one. But, again, disagreement about sizes of coefficients or elasticities in economics is a problem for the discretionary approaches too, and without a rules-based framework it is nearly impossible to understand the ramifications of that disagreement.

In its essence, Ben’s critique is of rules-based strategies for the instruments of policy in general rather than of particular policy rules. He prefers “constrained discretion.” As I see it, the broader evidence in the United States and in many other countries that Ben does not mention is that a rules-based policy has worked and that discretion—constrained or otherwise—has not.

We have had a serious financial crisis, a very deep recession, a not-so-great recovery, and now a virtually strategy-free international monetary system. I am sorry, but this is not a good record, even though, as I have emphasized many times, the Fed did an excellent job in its lender-of-last-resort role during the panic in the fall of 2008.