The Hoover Institution gathered economists, central bank officials, and members of the press for a conference on May 6 about how the US Federal Reserve should respond to the growing crisis of inflation in America. Saturday, May 14, 2022 6 min read 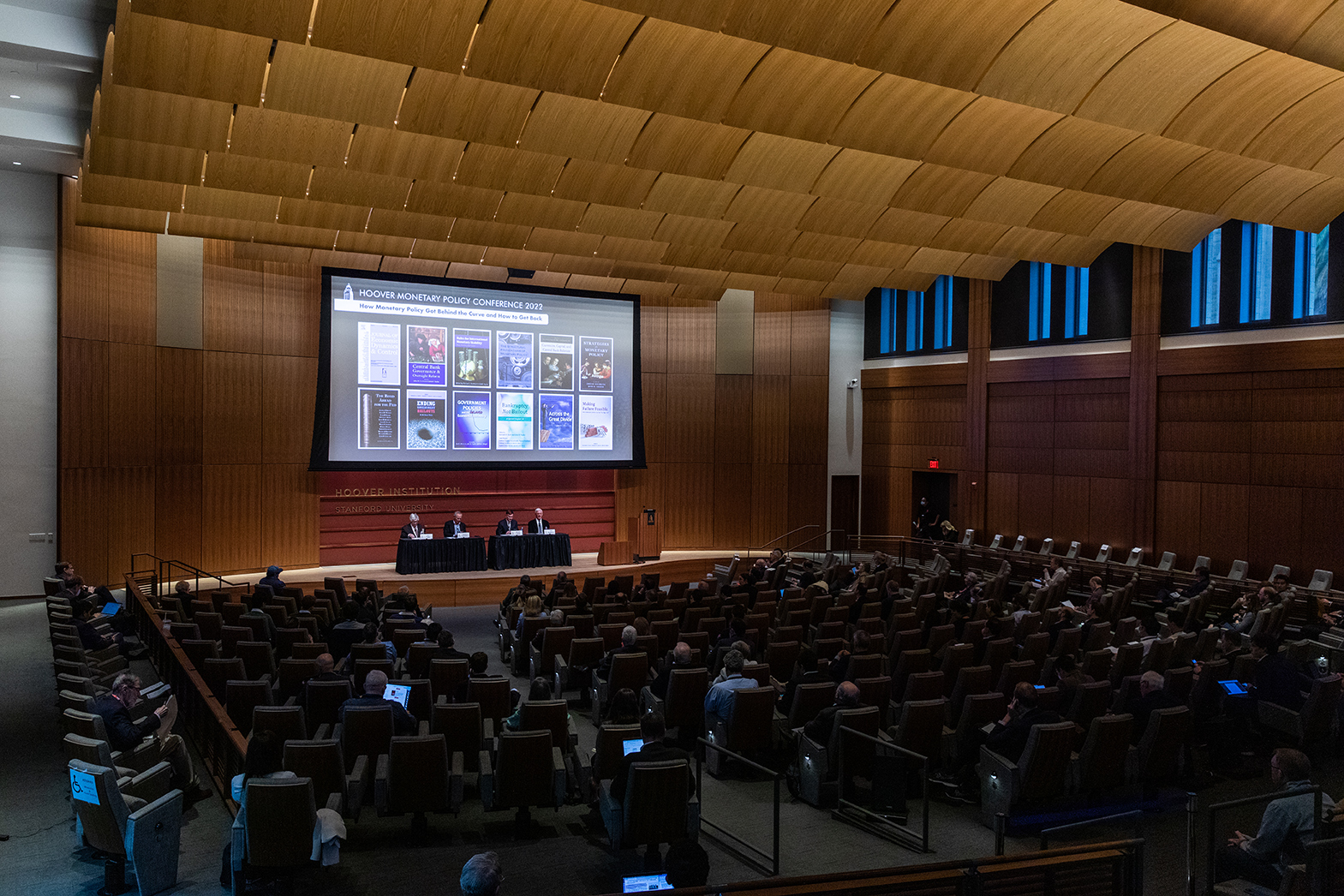 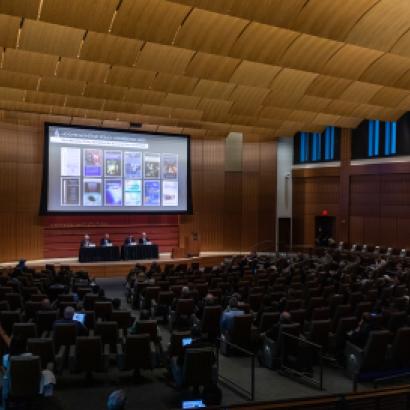 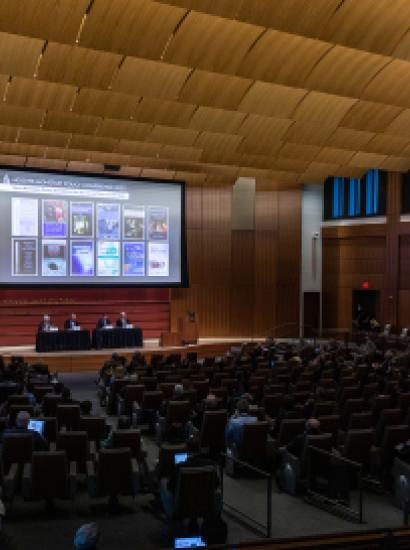 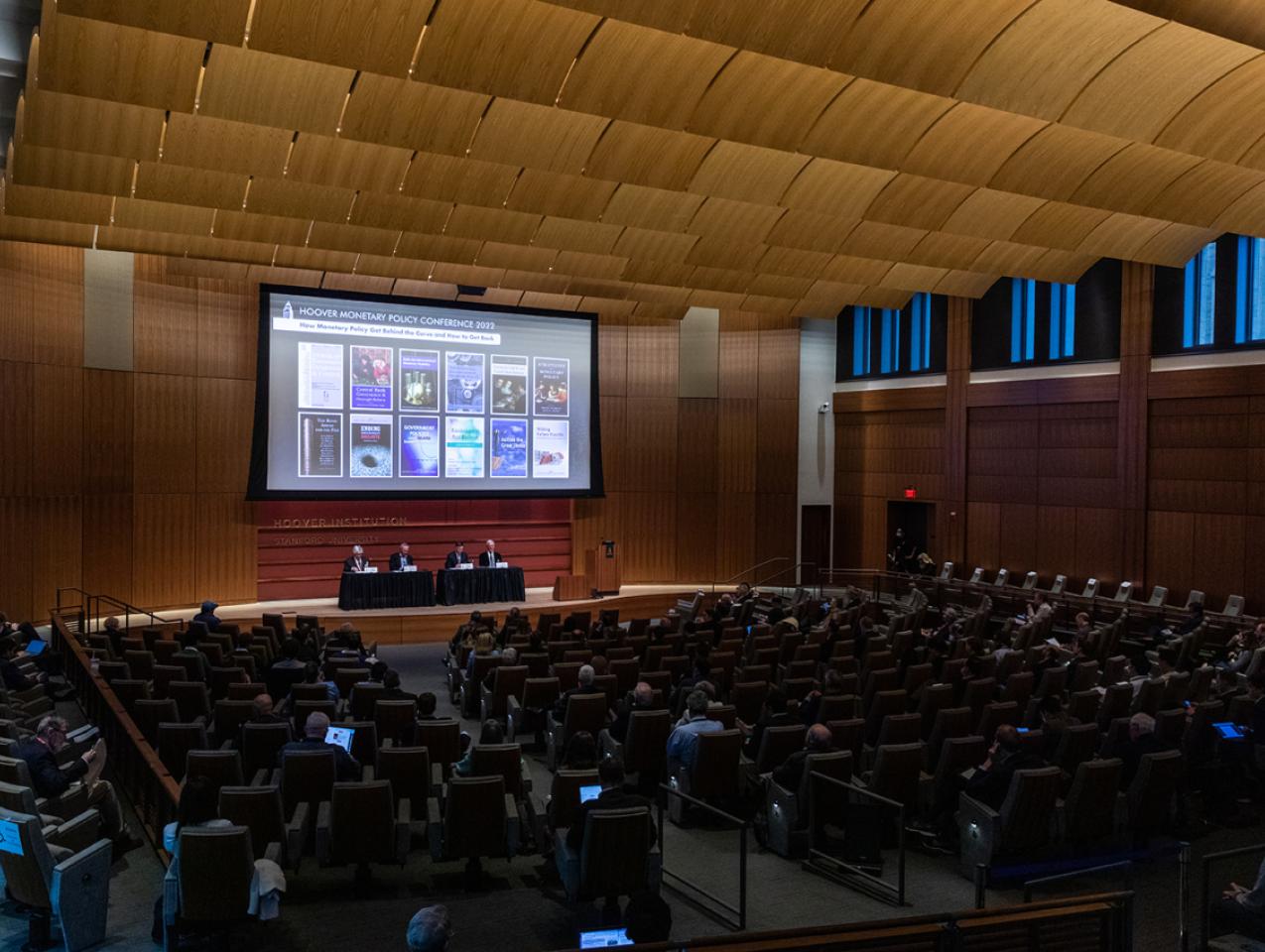 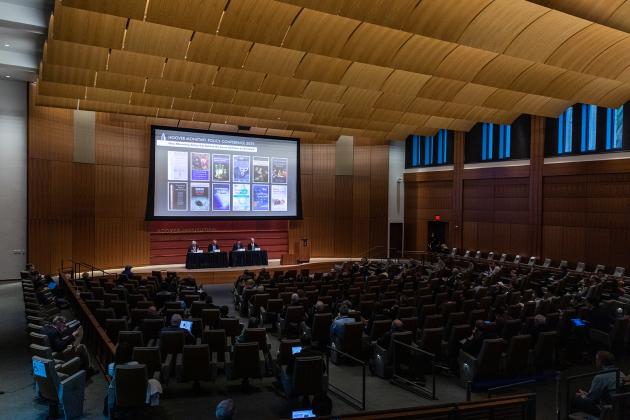 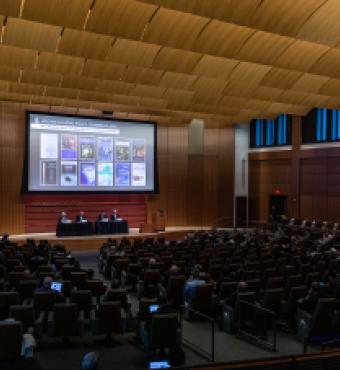 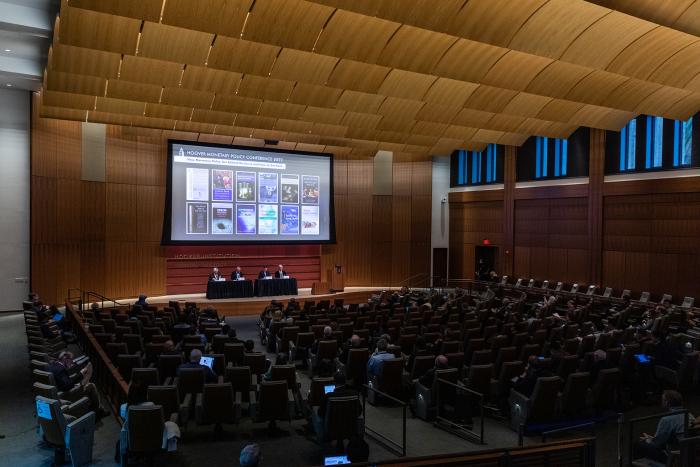 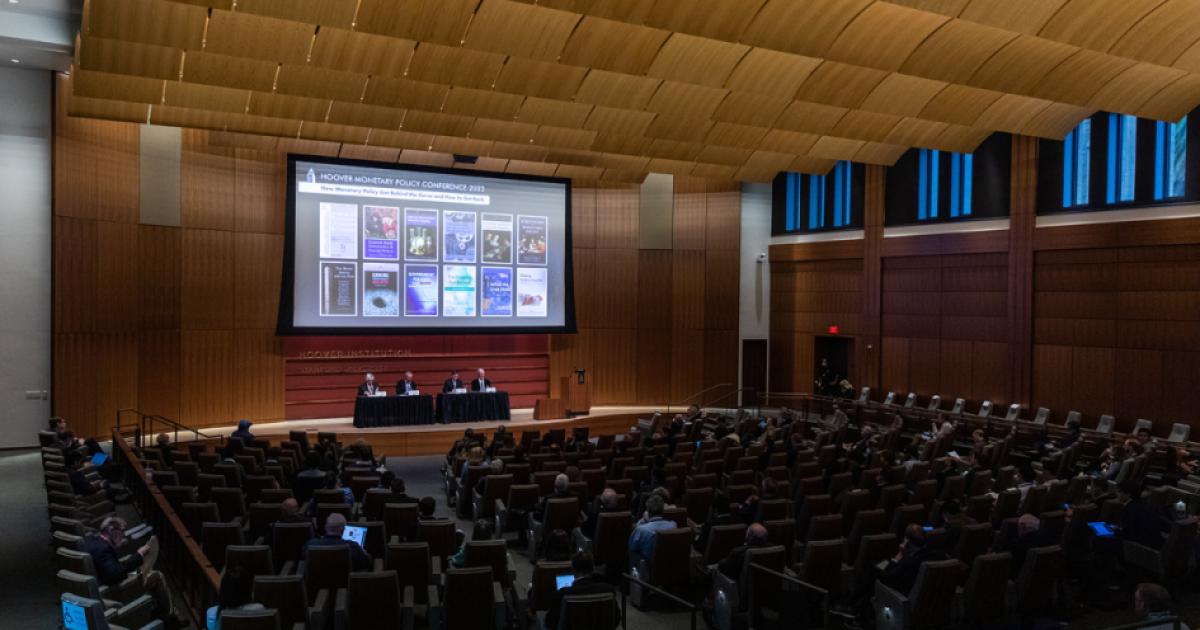 The Hoover Institution gathered economists, central bank officials, and members of the press for a conference on May 6 about how the US Federal Reserve should respondto the growing crisis of inflation in America.

The conference took place after the Fed’s May 3–4 meeting, when the US central bank raised interest rates by fifty basis points to a nominal target range of 0.75 percent to 1 percent. Two months ago, in March, the Fed made its first rate increase, of 0.25 percent, in three years.

The sessions, organized by Hoover fellows John B. Taylor,  John H. Cochrane, and Michael D. Bordo, addressed why the Fed has been hesitant to dampen rising prices by raising interest rates to a level above inflation and to impose a rules-based policy (such as the Taylor rule).

Hoover Institution director Condoleezza Rice opened the conference, describing the unprecedented events that have shocked the world since the beginning of the COVID-19 outbreak just over two years ago. She underscored that the global pandemic was not just a crisis of public health but one that also impacted multiple aspects of individual lives.

She emphasized that the rise in inflation—the subject of this conference—began before Russia’s invasion of Ukraine, an invasion that has multiple implications, which in this case extend beyond immediate concerns about European security arrangements. NATO member countries will soon come under extraordinary pressure to apportion significant shares of their respective budgets to defense spending. With the European Union poised to embargo Russian oil, EU member states will be looking elsewhere for hydrocarbons and exploring alternative energy supplies. She asserted that inflated prices of energy are causing ripples throughout the world economy. Rising transportation costs are making food more expensive, disproportionally impacting countries with poorer populations, especially those which have experienced political instability in recent years. Egypt’s agricultural sector, for example, is unable to meet half the country’s demand for cereal grains, such as wheat.

The first panel addressed the Federal Reserve’s current monetary policy strategy. The initial speaker was Richard Clarida, the recent vice chair of the Federal Reserve, who stepped down from his position in January. Clarida indicated that the Fed had fallen behind in matching interest rates with inflation in part because there was a widespread belief among policy makers that prices were temporarily high due to lingering supply shocks resulting from the pandemic. He explained that as soon as the Federal Open Market Committee realized that inflation was clearly a demand issue, it responded with interest rate hikes. He concluded by saying that the Fed has the instruments to blunt a possible emerging economic crisis.

Following Clarida’s remarks, former Treasury secretary Larry Summers argued that inflation should have been predictable a year ago. The federal government has injected $6 trillion in pandemic relief to American households since 2020. Americans are now beginning to spend the $2 trillion dollars in savings that they have accumulated since the pandemic. Moreover, the Fed’s balance sheet has expanded at a rapid pace, absorbing approximately half of that new debt.

Summers argued that the Fed is making a serious mistake in setting a benchmark for neutral interest rates at 2 to 2.5 percent in the hopes of achieving price stability and to prevent the economy from overheating. He maintained that the Fed should set interest rates above anticipated real inflation. However, he is not optimistic about the American economy in the near term. The former Harvard president explained that, historically, when wage inflation has been above 5 percent and unemployment below 4 percent, the economy has always descended into a recession.

In his presentation and paper prepared for the conference, “It’s Time to Get Back to Rules-Based Monetary Policy,” Taylor stressed the importance of monetary policy rules and argued that the Fed was way behind the curve. Even at the most conservative estimate of inflation, he said, any reasonable policy rule would calculate an interest rate much higher than the Fed’s current benchmark rate. He added that in following the Fed, the hesitancy of other countries’ central banks to enact rate increases may lead to an era of long-term global inflation.

During the second panel and in a paper he published the previous week, Cochrane provided an overview of how inflation emerged out of the period of the COVID-19 pandemic. He said that the Fed’s current nominal interest rate equates, when adjusted for inflation, to a negative real interest rate, that will, in turn, result in additional economic stimulus and accelerate price instability. Cochrane, however, acknowledges that the Fed may be operating with rational expectations that inflation may soon resolve on its own.

After Cochrane’s presentation, Kleinheinz Fellow Tyler Goodspeed argued that fiscal policies were largely responsible for the current inflation crisis. Two trillion dollars in fiscal stimulus provided by the American Rescue Plan (2021), an amount equal to 10 percent of US GDP, caused a dramatic increase in aggregate demand. Moreover, Goodspeed, the former acting chair of the Council of Economic Advisers, explained that other provisions of that bill, including expansion of unemployment benefits and the Child Tax Credit through the end of 2021, constrained output and impaired a supply-side recovery by raising implicit marginal tax rates on Americans choosing to return to work.

The third speaker, Beth Hammond, co-head of Goldman Sachs Global Financing Group, explained that Russia’s war on Ukraine was an exogenous factor that, along with monetary policy, is partly responsible for pushing up inflation rates. Hammond said that current volatility in the marketplace has slowed the efficient flow of capital. She cautioned against any unexpected changes in interest rates that may startle investors, who are already uncertain about the future of the economy.

According to Waller, Fed decision making has largely been dictated by the institution’s operating framework and its dual mandate as prescribed by law—the promotion of maximum employment and price stability. Moreover, pandemic-related supply constraints and lagging job reports in summer 2021 suggested that inflation may have been transitory in nature.

Waller and the other panelists believe that the Fed should have begun tapering asset buying in the third quarter of 2021. The three didn’t agree with other conference speakers that monetary policy is significantly behind the curve and affirmed that it is not too late to orchestrate a “soft landing” for the economy.

Stanford professor of economics Monika Piazzesi gave the dinner keynote remarks, echoing statements from other participants that skyrocketing inflation has caused negative real interest rates. Drawing on lessons learned about the economy in the 1970s, she explained that Americans would be wise to make real estate investments, since they are one of the few assets whose value keeps pace with inflation. Moreover, the US and state governments provide many different types of subsidies for home buying, including mortgage interest-rate deductions and tax shelters for capital gains.

Three scholars presented research related to the impact of fiscal and monetary policy on inflation.

Bordo, a Hoover visiting fellow, and Mickey Levy, chief economist of America and Asia at Berenberg Capital Markets, gave a presentation on “The Fed’s Delayed Exit from Monetary Ease.” The paper provides historical lessons of a century of Federal Reserve monetary policy to today’s inflation crisis. In their talk, Bordo and Levy demonstrated instances when the Fed’s policy helped fuel high rates of inflation and deepened recessions. Hoover research fellow and Stanford professor of history Jennifer Burns was the discussant in this session.

George Hall, professor of economics at Brandeis University, and Hoover senior fellow Thomas Sargent presented their paper “Three World Wars: Fiscal-Monetary Consequences.” Hall and Sargent explained the similarities and differences in fiscal and monetary policy responses to World War I, World War II, and the COVID-19 pandemic. All these crises prompted massive government spending, but they varied in terms of how debt was financed. Ellen McGrattan, professor of economics at the University of Minnesota, was the discussant.

Ex-Fed Official Says Rates of at Least 3.5% Will Be Needed to Slow Inflation
By Nick Timaraos via Wall Street Journal

Former Fed Policymakers Call for Sharp US Rate Hikes, Warn of Recession
By Ann Saphir and Lindsay Dunsmuir via Reuters

The Fed Just Increased Interest Rates by the Most Since 2000. A Former Official Says it’s Not Nearly Enough to Slow Inflation
By Colin Lodewick via Fortune