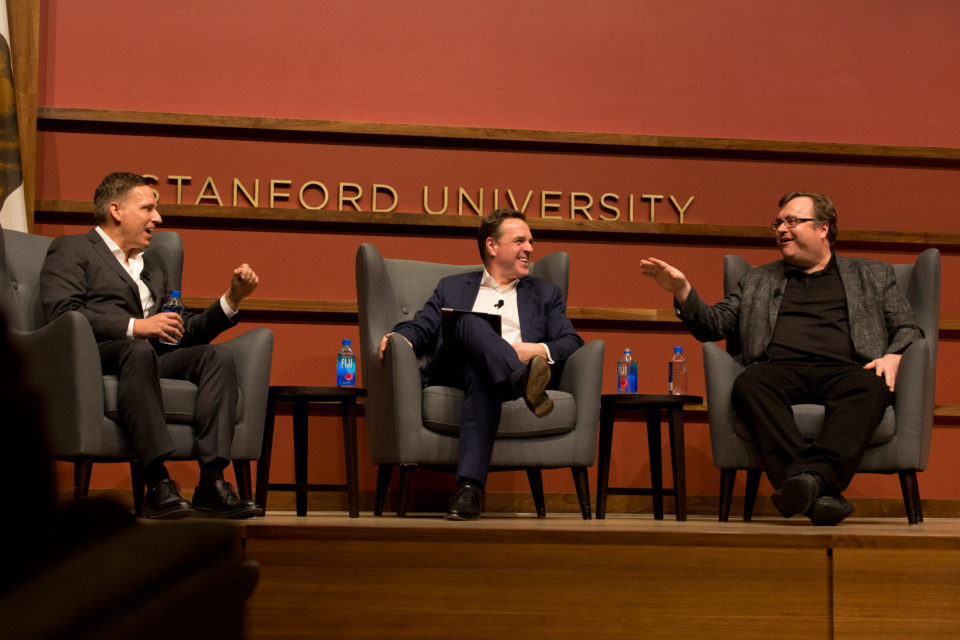 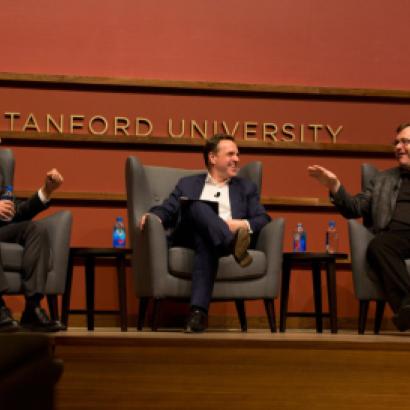 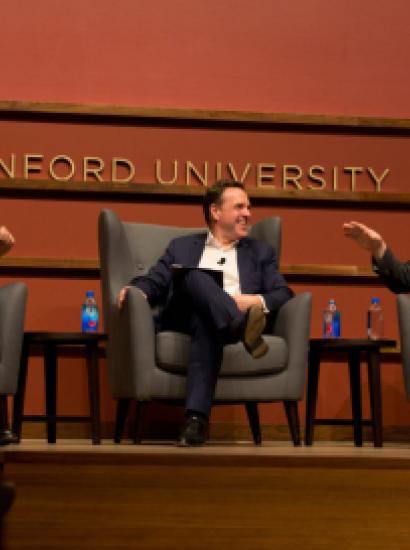 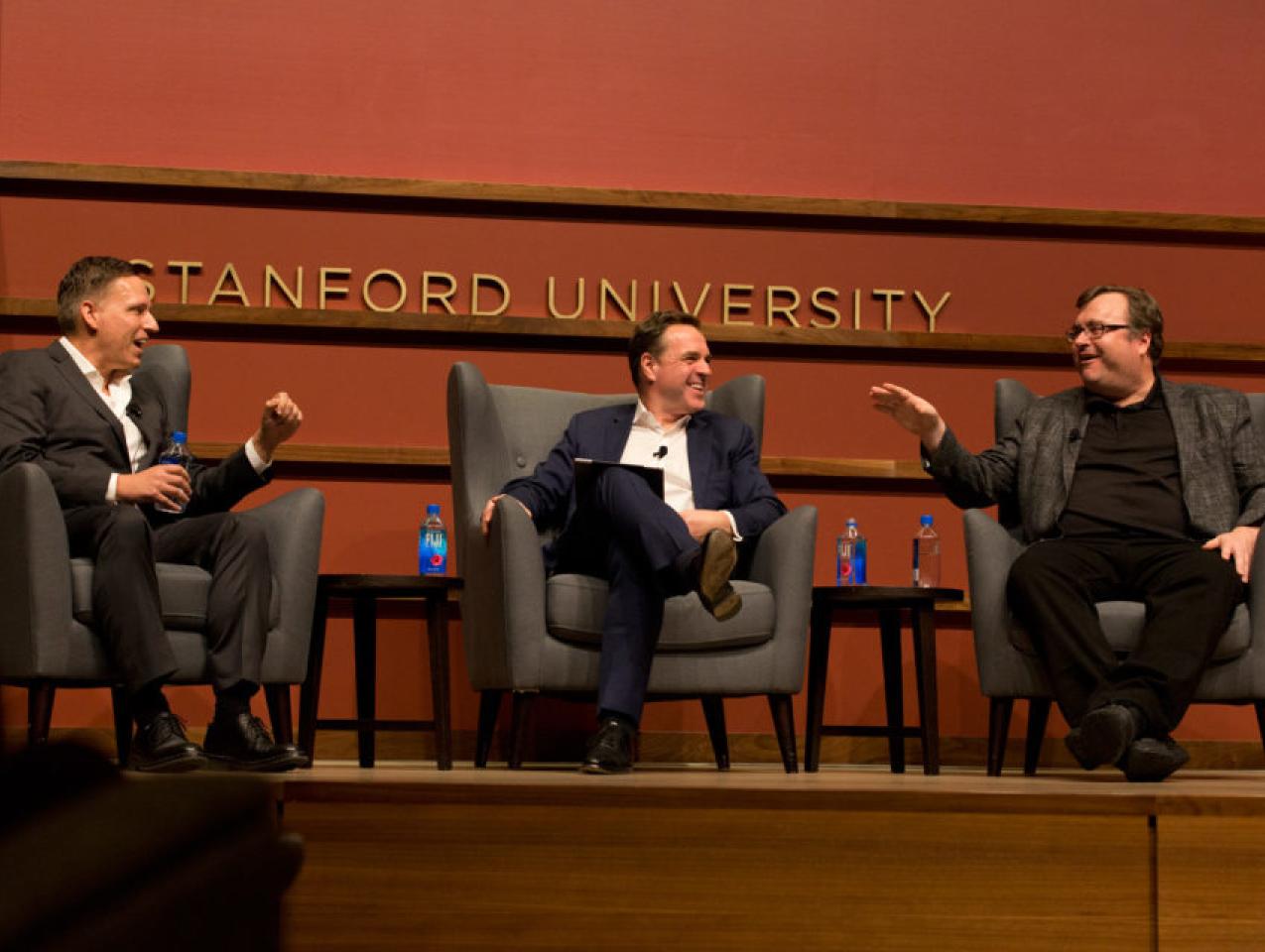 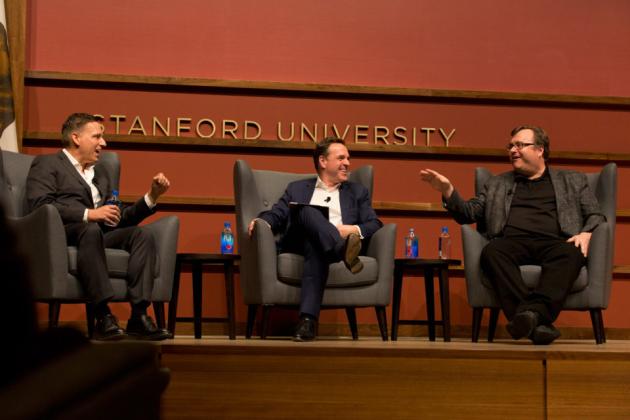 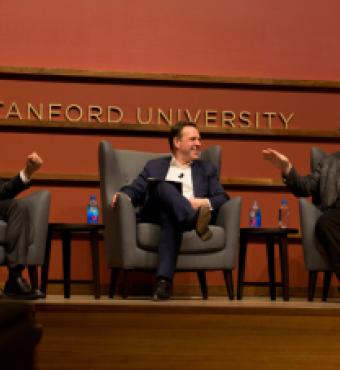 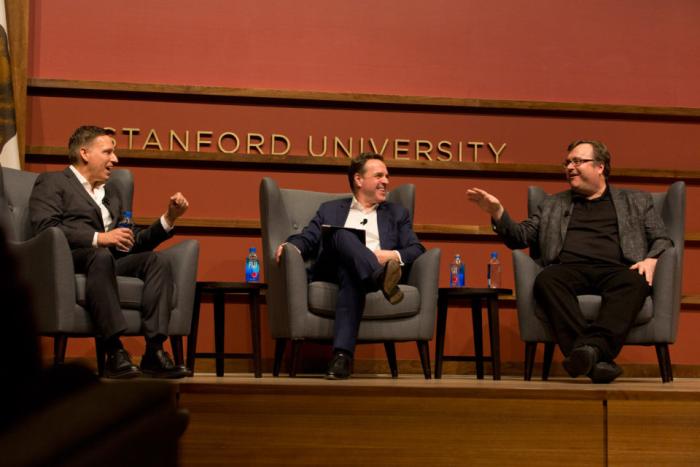 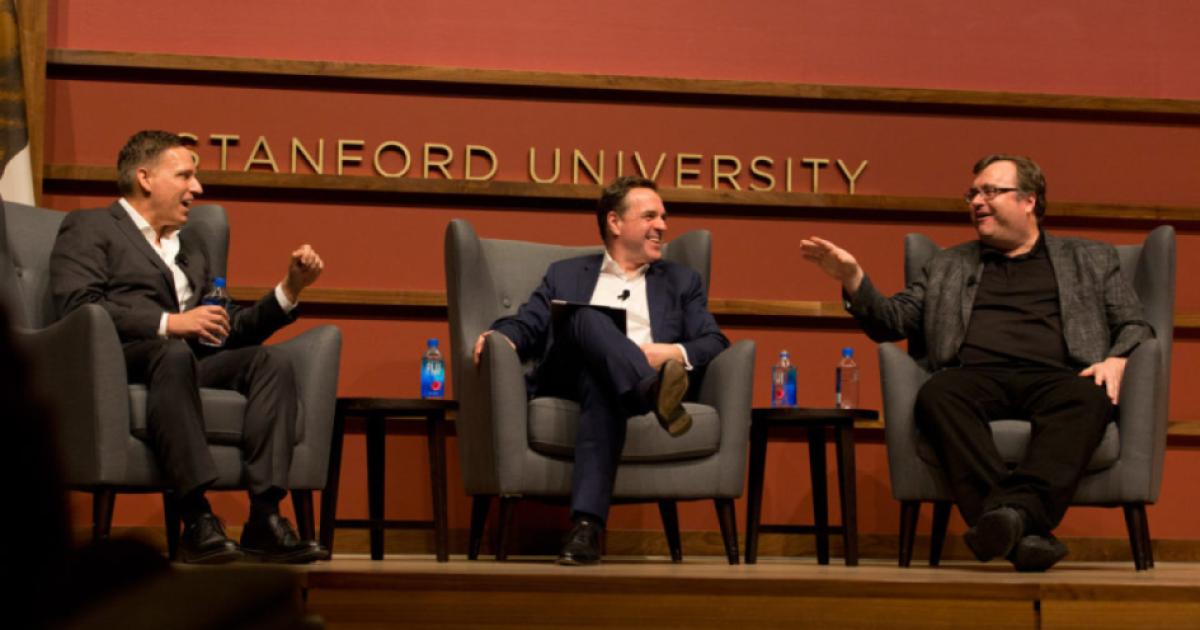 The Internet and technology have transformed American society and politics, while also accelerating gaps between the haves and have-nots, said two Stanford alumni entrepreneurs on Wednesday.

Peter Thiel and Reid Hoffman joined moderator Niall Ferguson of Stanford to talk about “Technology and Politics” on Jan. 31 at the Hoover Institution. Reflective of the university’s commitment to open exchange across the university, Cardinal Conversations is an initiative between Stanford, the Hoover Institution and the Freeman Spogli Institute for International Studies.

“We all agreed we wanted high-profile public intellectuals,” said Ferguson, a senior fellow at the Hoover Institution, in describing Thiel and Hoffman in his opening remarks. Ferguson led the effort to create the initiative along with Michael McFaul, director of the Freeman Spogli Institute and a Hoover senior fellow.

McFaul said, “Students are at the forefront of what we’re doing here. Cardinal Conversations is an experiment. And in the vernacular of tonight, it is a start-up.”

Silicon Valley learned from the 2016 election that it needs to focus on the “now” as well as the future, Hoffman said. An Internet entrepreneur and the co-founder of LinkedIn, he earned a bachelor’s degree in symbolic systems at Stanford and a master’s degree in philosophy at Oxford.

“We need to get to Spider-Man ethics – power comes responsibility,” for the tech industry, Hoffman added.

Thiel, an entrepreneur, venture capitalist and philanthropist, said that visions of “accelerating,” “inequality” and “stagnation” characterize today’s world, especially America. And Silicon Valley has not paid enough attention to economic stagnation issues among the less privileged.

“This is a very big part of the story we need to talk about,” he said.

Thiel, who founded PayPal and Palantir Technologies, graduated from Stanford with a bachelor’s degree in philosophy and a law degree.

“How fast is the future progressing? Is it progressing in a positive direction? We need to engage more” on this issue for those people left out of Silicon Valley success, said Thiel.

Ferguson asked what can be done with authoritarian regimes using technology to clamp down on freedom in those societies.

Hoffman said such regimes have learned over time to “game” technology, social media and the Internet to oppress people.

“We should figure out what to do about that,” he said. “I remain optimistic, but not Utopian,” that creative minds will find a way to use information for freedom and overcome repression.

Thiel said the forces of “centralization” and “decentralization” are clearly evident in technology and even politics. “Crypto is libertarian and AI is Communist,” he said, describing cryptocurrencies such as bitcoin, and artificial intelligence, which drives large data collection across societies.

On inequality, Ferguson said a “winner-takes-all” mentality in Silicon Valley may be good for a lucky few elites, but not for most people less fortunate. An “unintended consequence” of the last couple decades’ prolific innovations is greater inequality than is acceptable.

Hoffman said creating “meaning and progress for the bulk of people” in their lives is important. Five to 10 years from now there will be even more tech companies than today, he said, but that will only benefit society if those companies actually help the great masses of people make progress in their lives.

Thiel believes tech companies are playing the political game poorly. He said that Silicon Valley is a “one-party state,” leaning left, while the banking industry hedged their bets by supporting both political parties before and after the 2009 financial crisis. The result, he said, is that Silicon Valley is less able to understand and connect with the whole of the American electorate.

On China, Hoffman said that country’s innovation poses either a healthy competition or a serious threat to Silicon Valley’s dominance in technology. He noted that one Chinese city is graduating one million engineers from college a year.

He answered one student questioner that American democracy seems to be in crisis, citing the 2016 election meddling and “fake news” as reasons why. “It’s unquestionable that our democracy is on turmoil.”

Thiel said political polarization in the U.S. began increasing in the late 1960s when economic stagnation started – and the two are inherently linked, he added.

“When the pie is not growing, everything becomes zero sum and much more hostile; there’s a loser for every winner,” he said.

Stanford’s President Marc Tessier-Lavigne and Provost Persis Drell wrote last November in their blog Notes on the Quad that preparations were underway for “a series of discussions with well-known individuals who hold contrasting views on consequential subjects.”

Drell opened this first event with remarks on why the Cardinal Conversations initiative is important to the dynamic of free expression at Stanford – a “broad range of ideas” and diverse perspectives drive discovery, research and ways of thinking across the university, she said.

The students who developed the topic list for Cardinal Conversations come from a broad range of organizations across the political spectrum, including some from the Associated Students of Stanford University and other student groups active in fostering a diversity of views on campus, such as the Stanford Political Union and Stanford in Government.

The plan is to make Cardinal Conversations a continuing series. Ferguson and McFaul are already contemplating the 2018-19 program.