Featured Books By Hoover Fellows In 2022

A review of the books published this year by Hoover fellows with topics ranging from China to immigration to indigenous economies. 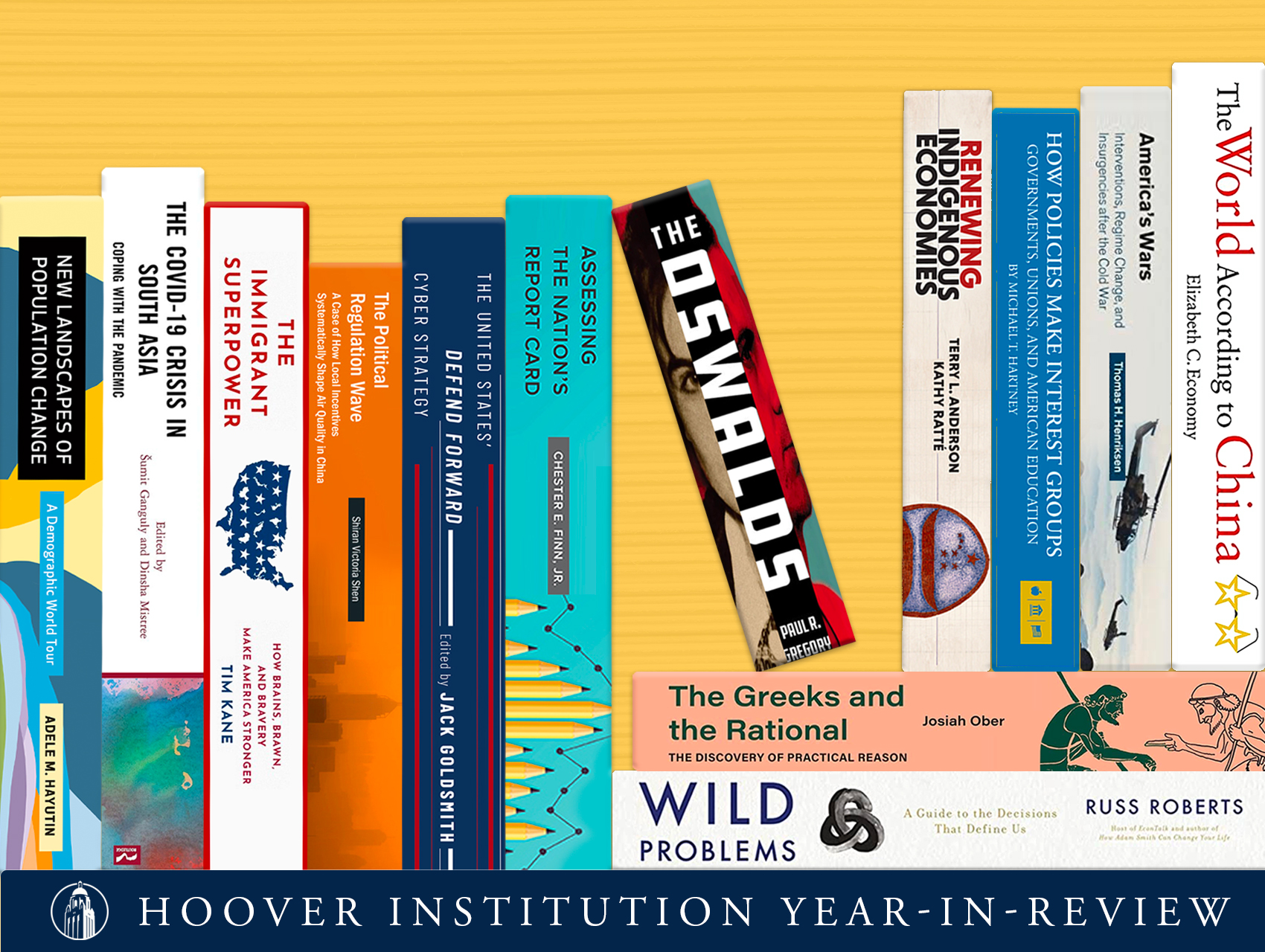 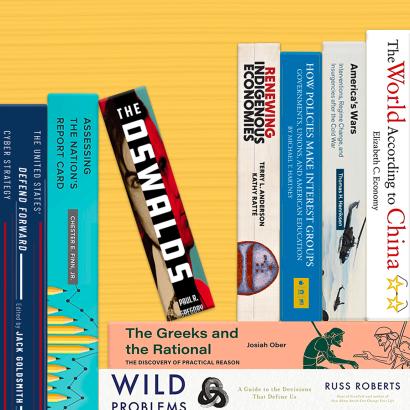 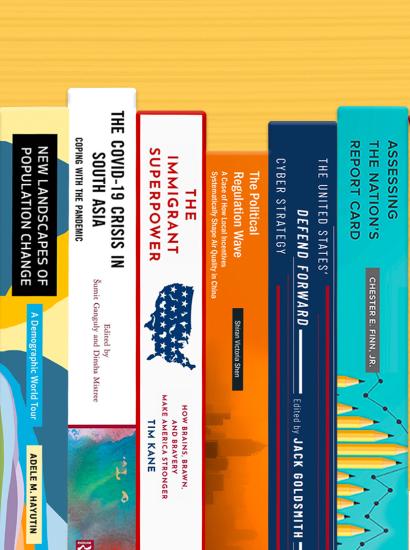 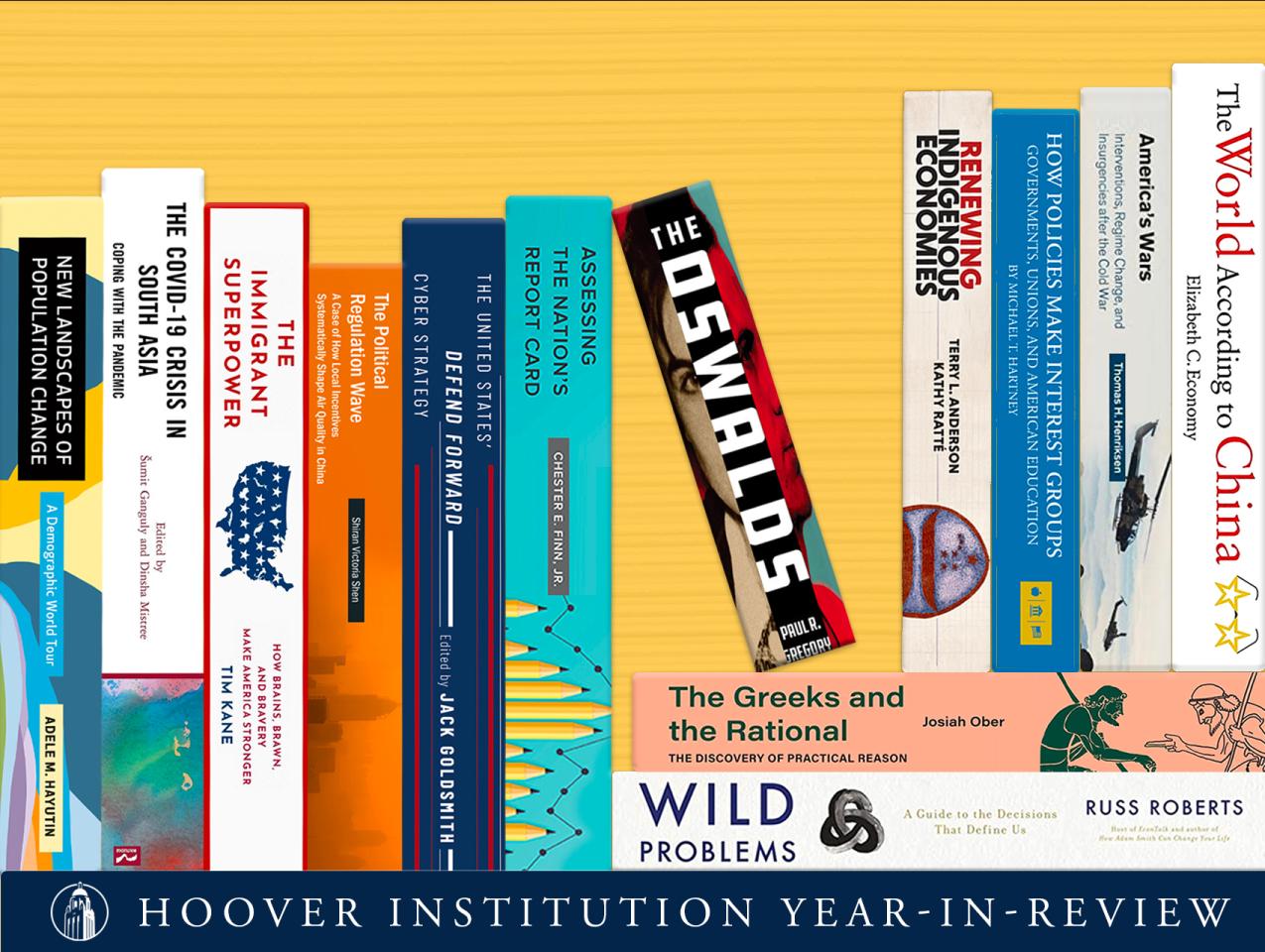 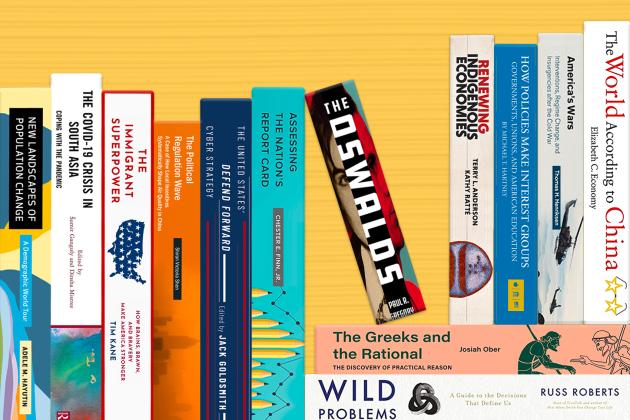 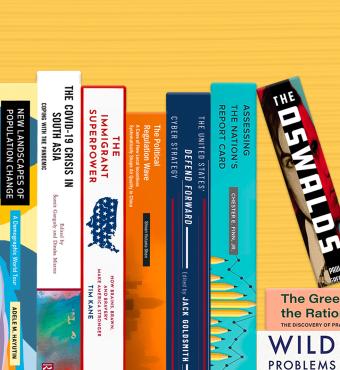 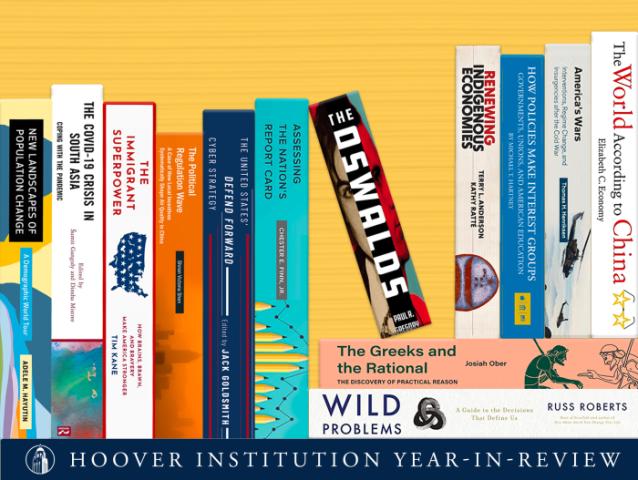 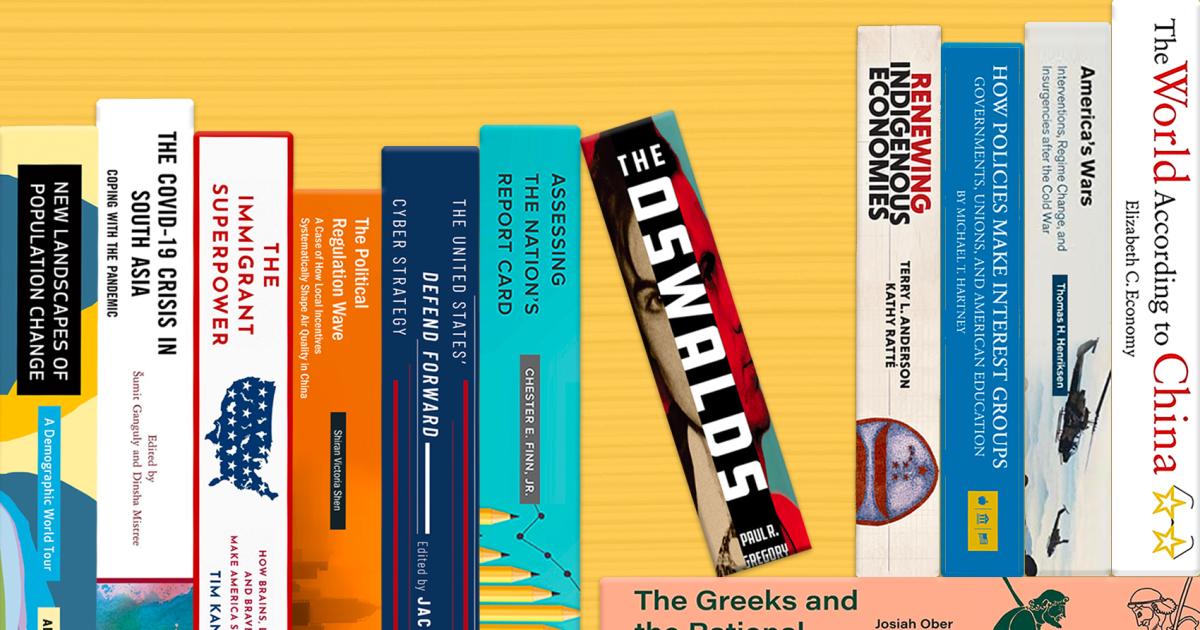 The depth of Hoover’s scholarship is reflected in the numerous books published by our fellows on a broad variety of topics and issues. This timely and prodigious output offers insight on the most pressing issues in public policy. The books they published this year range in topics from China to immigration to indigenous economies.

Please check out this selection of books published by Hoover scholars in 2022.

The World According to China

An economic and military superpower with 20 percent of the world’s population, China has the wherewithal to transform the international system. Xi Jinping’s bold calls for China to “lead in the reform of the global governance system” suggest that he has just such an ambition. But how does he plan to realize it? And what does it mean for the rest of the world?

The collapse of the Soviet Union ushered in American global hegemony in world affairs. In the post-Cold War period, both Democrat and Republican governments intervened, fought insurgencies, and changed regimes. In America's Wars, Thomas Henriksen explores how America tried to remake the world by militarily invading a host of nations beset with civil wars, ethnic cleansing, brutal dictators, and devastating humanitarian conditions. The immediate post-Cold War years saw the United States carrying out interventions in the name of Western-style democracy, humanitarianism, and liberal internationalism in Panama, Somalia, Haiti, Bosnia and Kosovo. Later, the 9/11 terrorist attacks led America into larger-scale military incursions to defend itself from further assaults by al Qaeda in Afghanistan and from perceived nuclear arms in Iraq, while fighting small-footprint conflicts in Africa, Asia, and Arabia. This era is coming to an end with the resurgence of great power rivalry and rising threats from China and Russia.

America was built by immigrants, yet there has long been strong political opposition to immigration. In recent years, the hostility toward immigration has reached a tipping point. While partisan fighting and confusion over basic policy dominate a broken conversation, we often overlook a fundamental American truth: immigration makes America great.

Why has there been uneven success in reducing air pollution even in the same locality over time? This book offers an innovative theorization of how local political incentives can affect bureaucratic regulation. Using empirical evidence, it examines and compares the control of different air pollutants in China-an autocracy-and, to a lesser extent, Mexico-a democracy. Making use of new data, approaches, and techniques across political science, environmental sciences, and engineering, Shen reveals that local leaders and politicians are incentivized to cater to the policy preferences of their superiors or constituents, respectively, giving rise to varying levels of regulatory stringency during the leaders' tenures. Shen demonstrates that when ambiguity dilutes regulatory effectiveness, having the right incentives and enhanced monitoring is insufficient for successful policy implementation. Vividly explaining key phenomena through anecdotes and personal interviews, this book identifies new causes of air pollution and proposes timely solutions. This title is also available as Open Access on Cambridge Core.

Assessing the Nation’s Report Card: Challenges and Choices for NAEP

Assessing the Nation’s Report Card examines the history of the National Assessment of Educational Progress (NAEP) and outlines plans for improving and modernizing the organization.

The history of Indigenous economies in the Americas presents a puzzle: When Europeans first encountered Indigenous peoples, they discovered societies with high standards of living, vast trading networks, and flourishing markets. But colonizers changed the rules of the game, and by the twentieth century, most Indians had been forced onto reservations and saddled with institutions inimical to their customs and cultures, and incompatible with wealth creation.

The Covid-19 Crisis In South Asia: Coping With The Pandemic (Asian Security Studies)

by Dinsha Mistree and Sumit Ganguly via Routledge
Tuesday, July 5, 2022

As the first academic volume to deal with the COVID-19 pandemic in South Asia, it examines such issues as how India has dealt with the fallout of the pandemic on its substantial diaspora in the Middle East; the competitive Sino-Indian vaccine diplomacy strategies in Bangladesh; Nepal’s attempts to cope with the pandemic in light of its limited health infrastructure; Sri Lanka’s differential treatment of its population based upon ethnic preferences; and how Pakistan’s civil-military relations shaped its handling of the pandemic. The Introduction and the first section summarize the responses to the pandemic made by each principal state in the region. These chapters assess the process of decision-making within each state, with special attention placed on identifying and analzying the actors involved. The Covid-19 pandemic is also reshaping international relations of the subcontinent and the pandemic has laid bare several new cross-border challenges and opportunities that states will have to contend with in the future. The book also considers five of the most pressing issue areas. First, it considers how diaspora communities in the Gulf were affected by the pandemic, and what lessons South Asian sending states can take from protecting their citizens in the future. Second, the Covid-19 pandemic will affect how countries engage in status politics, shaping which countries will be able to lead in regional relations. Third, the Covid-19 pandemic is likely to affect prospects for regional cooperation, both for dealing with the current pandemic as well as future crises. Fourth, it will shape how South Asian states engage in global governance. Fifth, South Asian states may revisit their relations with China in light of the pandemic.

Wild Problems: A Guide to the Decisions That Define Us

Algorithms and apps analyze data and tell you how to beat the traffic, what books to buy, what music to listen to, and even who to date—often with great results. But what do you do when you face the big decisions of life—the "wild problems" of who to marry, whether to have children, where to move, how to forge a life well-lived—that can’t be solved by measurement or calculation?

A critical, revelatory examination of teachers unions’ rise and influence in American politics.

As most American labor organizations struggle for survival and relevance in the twenty-first century, teachers unions appear to be an exception. Despite being all but nonexistent until the 1960s, these unions are maintaining members, assets—and political influence. As the COVID-19 epidemic has illustrated, today’s teachers unions are something greater than mere labor organizations: they are primary influencers of American education policy. How Policies Make Interest Groups examines the rise of these unions to their current place of influence in American politics.

The Oswalds: An Untold Account of Marina and Lee

Merely two hours after the assassination of President John F. Kennedy, television cameras captured police escorting a suspect into Dallas police headquarters. Meanwhile at the University of Oklahoma, watching the coverage in the student center, Paul Gregory scanned the figure in dark trousers and a white, V-neck tee shirt and saw the bruised and battered face of Lee Harvey Oswald. Shocked, Gregory said, “I know that man.” In fact, he knew Oswald and his wife Marina better than almost anyone in America.

After sixty years, Paul Gregory finally tells everything he knows about the Oswalds and how he watched the soul of a killer take shape.

The Greeks and the Rational: The Discovery of Practical Reason

by Josiah Ober via University of California Press
Tuesday, November 29, 2022

The Greek discovery of practical reason, as the skilled performance of strategic thinking in public and private affairs, was an intellectual breakthrough that remains both a feature of and a bug in our modern world. Countering arguments that rational choice-making is a contingent product of modernity, The Greeks and the Rational traces the long history of theorizing rationality back to ancient Greece.

Examines past global population dynamics and illuminates how these forces will combine over the coming years in ways that threaten economic security, political stability, workforces, migration, and more.