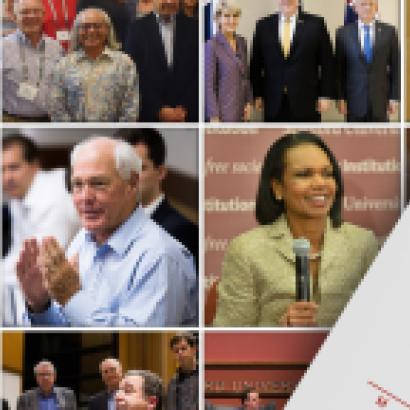 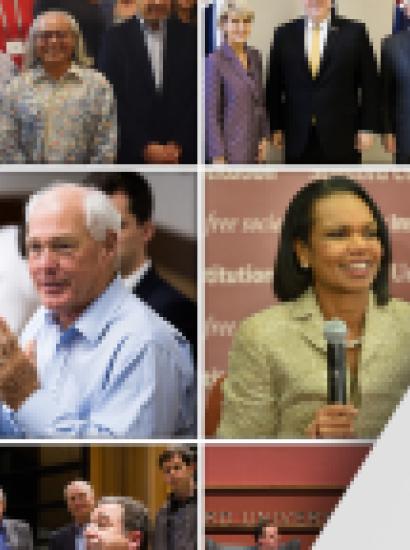 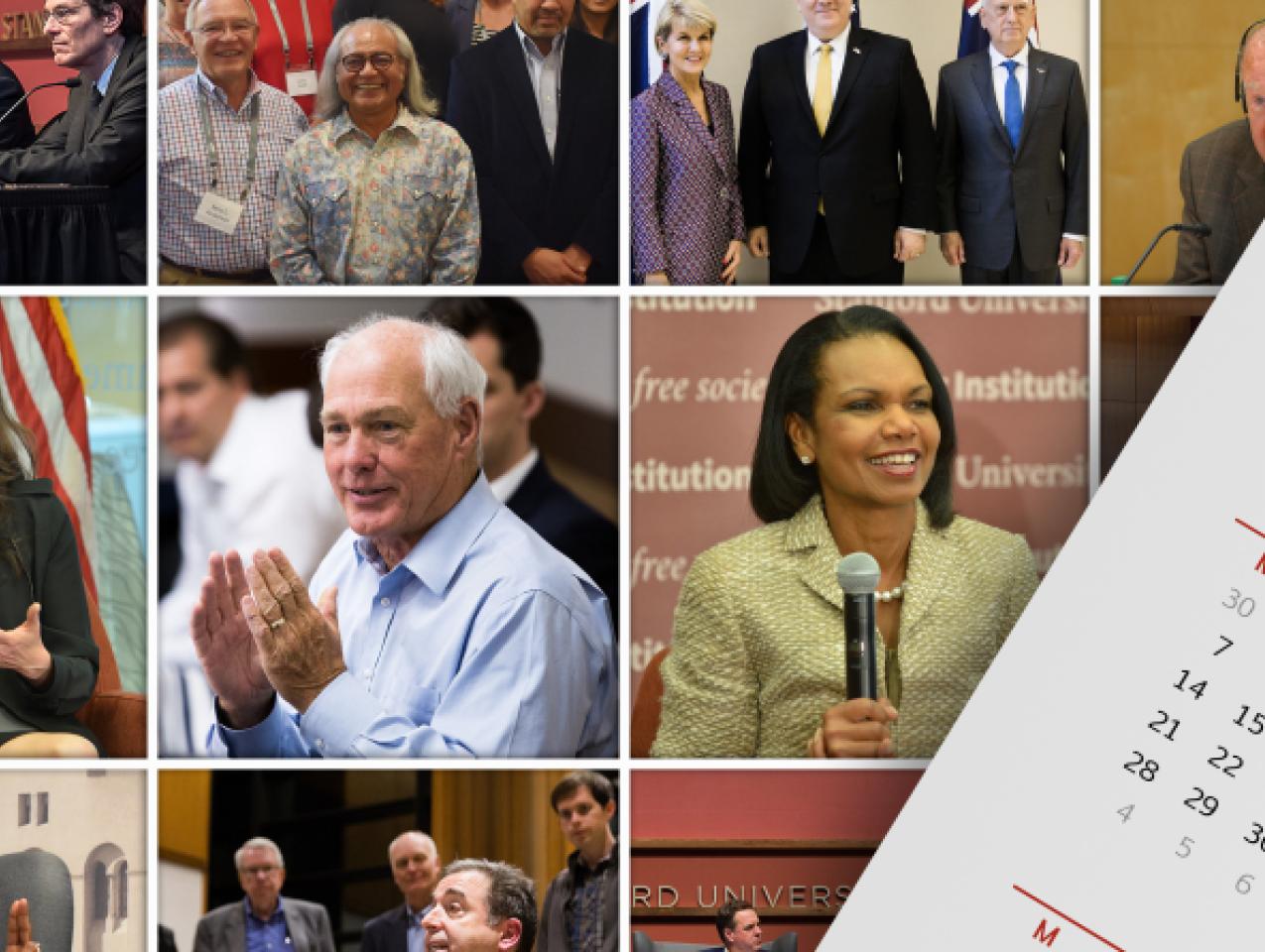 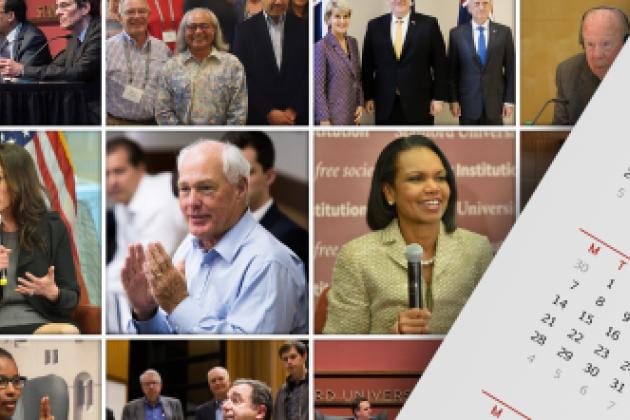 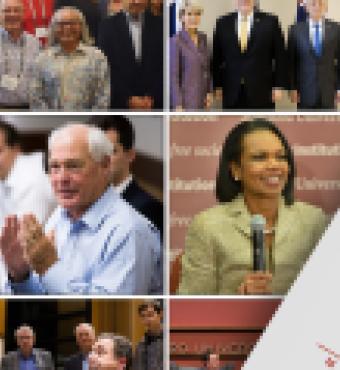 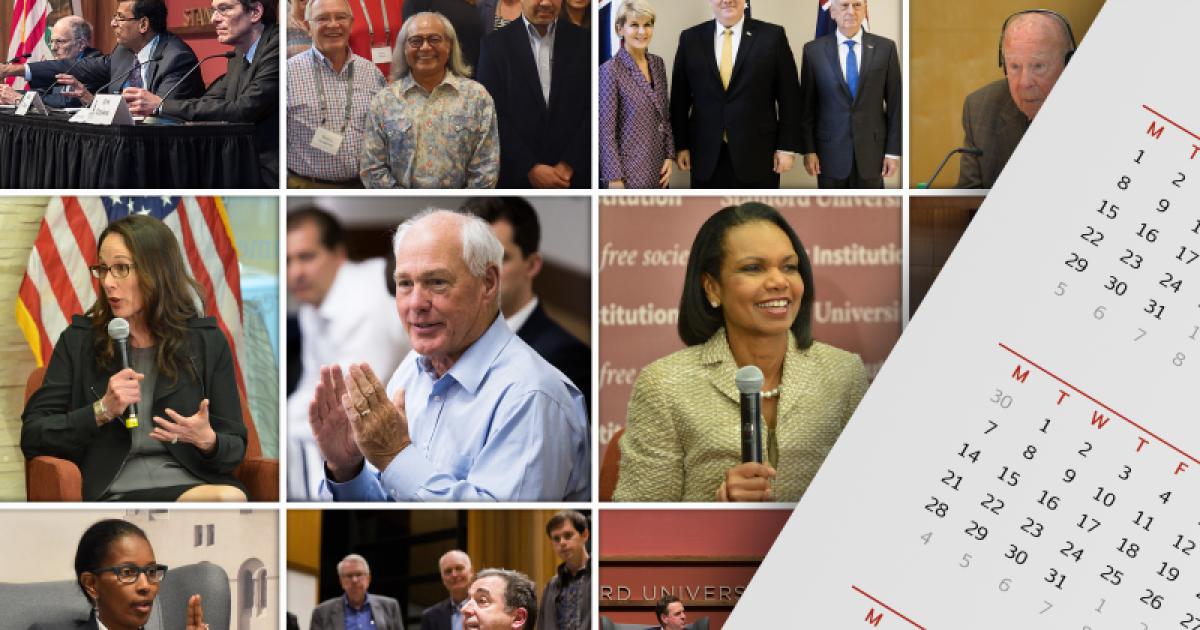 The breadth and depth of Hoover Institution scholarship is reflected in the many events put on by the Hoover Institution on a broad variety of topics and issues. Scholars discussed policy avenues for current events, the state of the world today, and the future of America in the world. The events this year ranged in topics and guests from former Secretary of State Rex Tillerson, to Secretary of Defense James Mattis, to governance in an emerging new world.

Take a look at the events the Hoover Institution hosted in 2018:

The Hoover Institution hosted a conversation with Secretary of State Rex W. Tillerson as he discussed “The Way Forward in Syria.”

"Does Economic Growth Help the Middle Class and the Poor?" A PolicyEd Talk with Russ Roberts

The Hoover Institution hosted a PolicyEd Talk with Russ Roberts, “Does Economic Growth Help the Middle Class and the Poor?”

What is our national character as Americans—and has it been lost? That question begs a larger story and dialogue that will be unveiled next week when PBS shows a new documentary, American Creed, which originated with two Stanford scholars.

The Price of Peace: A Conversation with Victor Hanson and Peter Robinson

The Hoover Institution hosted "'The Price of Peace: A Conversation with Victor Hanson and Peter Robinson.”

Congressional staffers interacted with Hoover fellows and learned about a wide array of policy perspectives at a recent workshop. Now in its second year, the Stuart Family Congressional Fellowship Program drew twenty-three staffers from Congress to the Stanford campus during April 3–5. With applications to the program almost doubling since last year, the selected attendees reflected a diversity in party affiliation, job functions, and areas of expertise.

Two related issues pervade discussions of monetary policy at individual central banks and reform of the international monetary and financial system: (1) the volatility of capital flows and exchange rates, and (2) the use of balance sheet policy by central banks. The key issues are whether capital flow management is appropriate to deal with volatility and whether the central bank balance sheet should be reduced to a level where interest rates are market-determined. The issues are related because of the large effect of balance sheet operations on exchange rates and capital flows. The aim of the policy conference was to examine relevant research developments and debate the policy options. The conference consisted of five formal presentations, three policy panels, and in-depth discussions.

Political Risk: A Conversation with Condoleezza Rice and Amy Zegart

The Hoover Library & Archives marked the opening of the exhibition We Shot the War: Overseas Weekly in Vietnam with a panel discussion about Vietnam War-era politics and journalism.

The Macroeconomic Modelling and Model Comparison Network is a new research network under the auspices of the Centre for Economic Policy Research (CEPR) in London and is a part of the new Macroeconomic Model Comparison Initiative (MMCI) by the Hoover Institution at Stanford University and the Institute for Monetary and Financial Stability (IMFS) at Goethe University Frankfurt. The MMCI initiative is supported financially by the Alfred P. Sloan Foundation.

Overseers, Directors, and Scholars Meet at Hoover Headquarters to Discuss Strategy and New Developments in US Policy

The Hoover Institution hosted a talk by Professor James A. Robinson of the University of Chicago on “Why Indian Nations Fail.”

Faced with an aging and shrinking population and a weak economy, Russia’s future appears uncertain. Participants explored how Russia is taking on the challenges posed by an aging and declining population and attempting to exploit the economic and military potential of advancing technologies. The discussion featured Stephen Kotkin, Maria Smekalova speaking on behalf of former Russian Foreign Minister Igor Ivanov, Michael McFaul, and David Holloway and was moderated by Kori Schake.

2018 CISAC Drell Lecture: The Battle for the Soul of the Internet

Alex Stamos discussed the difficult balancing act societies around the world are facing dealing with the security and safety impacts of new technology, followed by a moderated discussion with Andrew Grotto.

Revisiting the 2008 Financial Crisis: The Causes

The Causes: Market and policy antecedents and repercussions of the 2008 financial crisis and the Great Recession began long before and lasted long after the Lehman bankruptcy in September 2018. This session covered the causes of the financial crisis.

Even as its economy continues to grow, and it becomes a world leader in technology, China must also contend with an aging, unbalanced population and the information revolution. The discussion examined China’s pursuit of next-generation technologies for economic, political, and military purposes as well as its changing demographics and widespread use of new means of communications.

Revisiting the 2008 Financial Crisis: The Panic

The Panic: Market and policy antecedents and repercussions of the 2008 financial crisis and the Great Recession began long before and lasted long after the Lehman bankruptcy in September 2018. This session examined the actions and interventions taken during the financial crisis.

Governance in an Emerging New World: The Information Challenge to Democracy

The communications revolution has surrounded society with information, some right and some wrong, and enabled people to communicate and organize as never before. This change gives new dimensions to the old challenge of governing over diversity. Participants examine the rapid spread of information and means of communicating and suggest responses to the governance challenges posed by social media, fake news, and the decline of confidence in institutions. Featuring Niall Ferguson and Joseph Nye, and moderated by Condoleezza Rice.

Foreign policy starts in the neighborhood. Mexico, Central America, and South America are at the tail end of decades of rapid workforce growth, a period during which migration was central to their relationships with the United States. The panel will address how a tighter labor supply, alongside new means of production, will affect the economic development of our southern neighbors. The panel will also consider whether the public transparency offered by new forms of communications can improve governance and, with it, growth.

Finally, Hoover mourned the loss of one of our fellows this year. While his intellectual contributions to the Institution and society will live on, his presence and continued work will be greatly missed.

Richard F. Staar was a senior fellow, emeritus at the Hoover Institution. He served as US ambassador to the Mutual and Balanced Force Reduction (MBFR) negotiations in Vienna, Austria. His areas of specialization included the Federation of Russia and East-Central Europe, military strategy, national security, arms control, and public diplomacy.