Notable News and Events in 2017

As 2017 comes to a close, we look back at a busy year at the Hoover Institution. There were many noteworthy activities and initiatives at Hoover as the Institution works to advance policy ideas that promote economic opportunity and prosperity, while securing and safeguarding the peace for America and all mankind Tuesday, December 19, 2017 4 min read 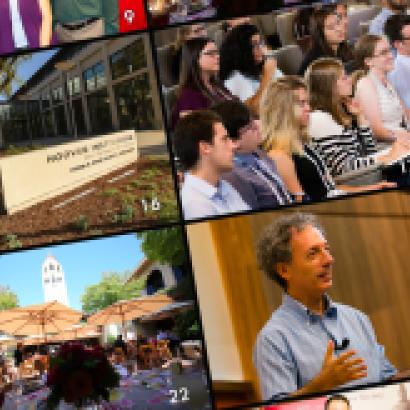 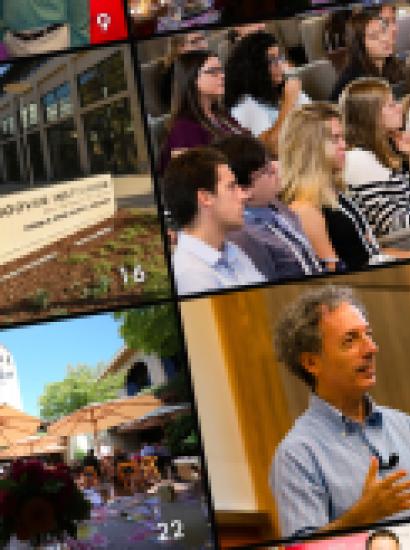 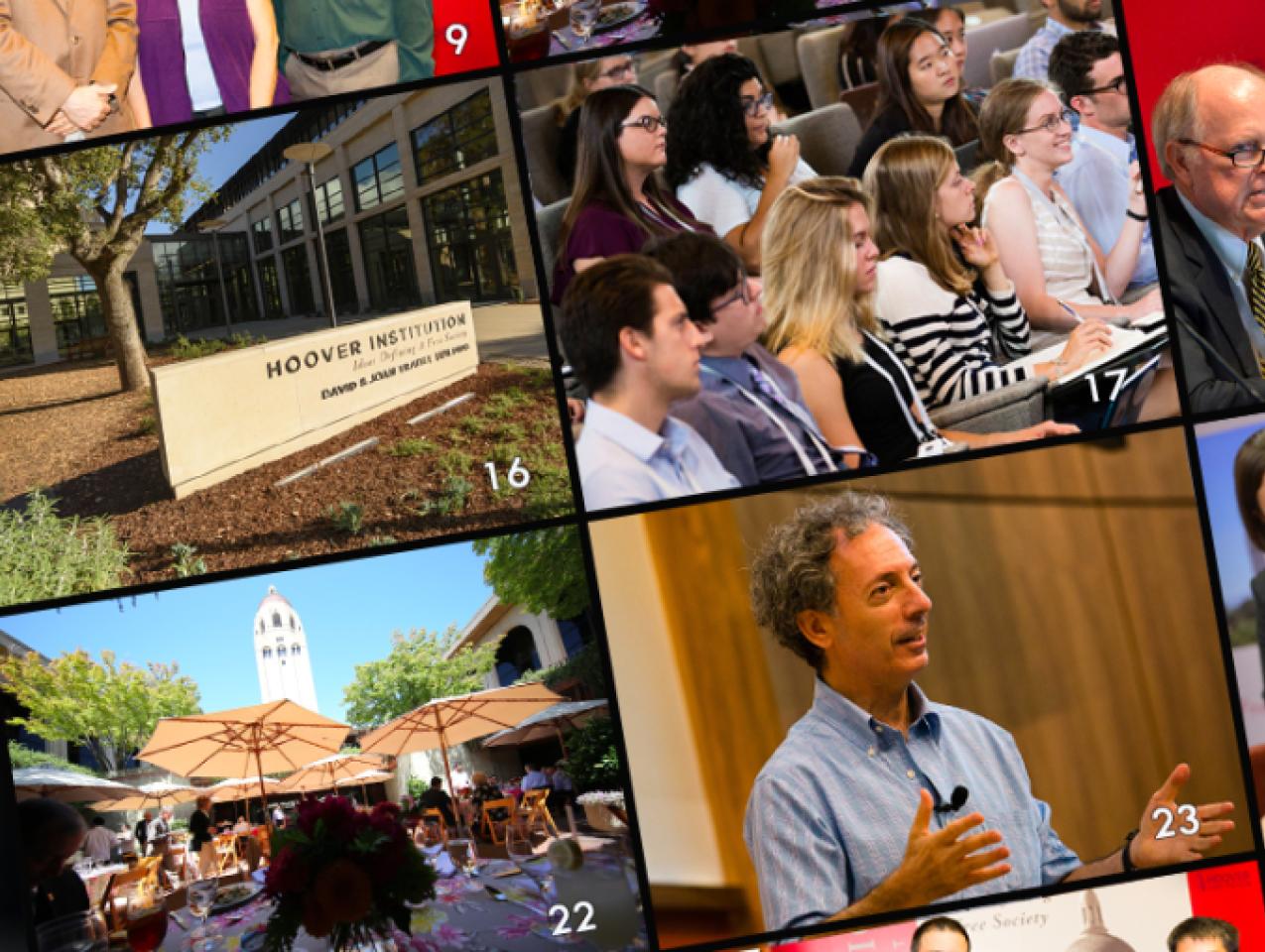 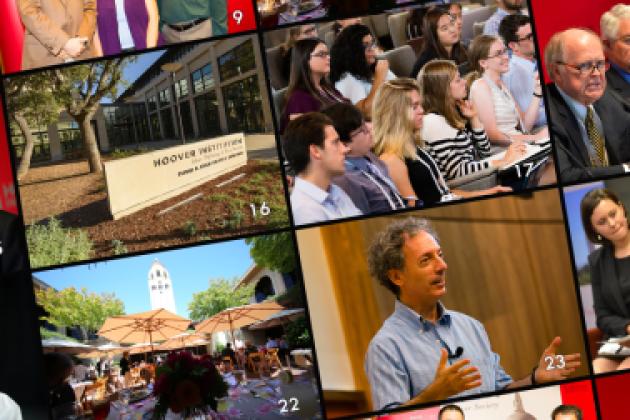 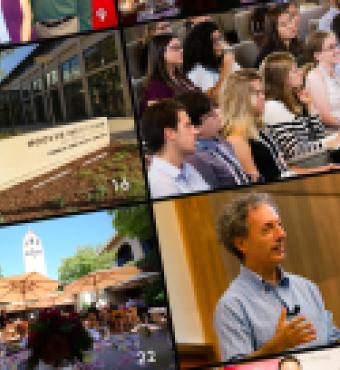 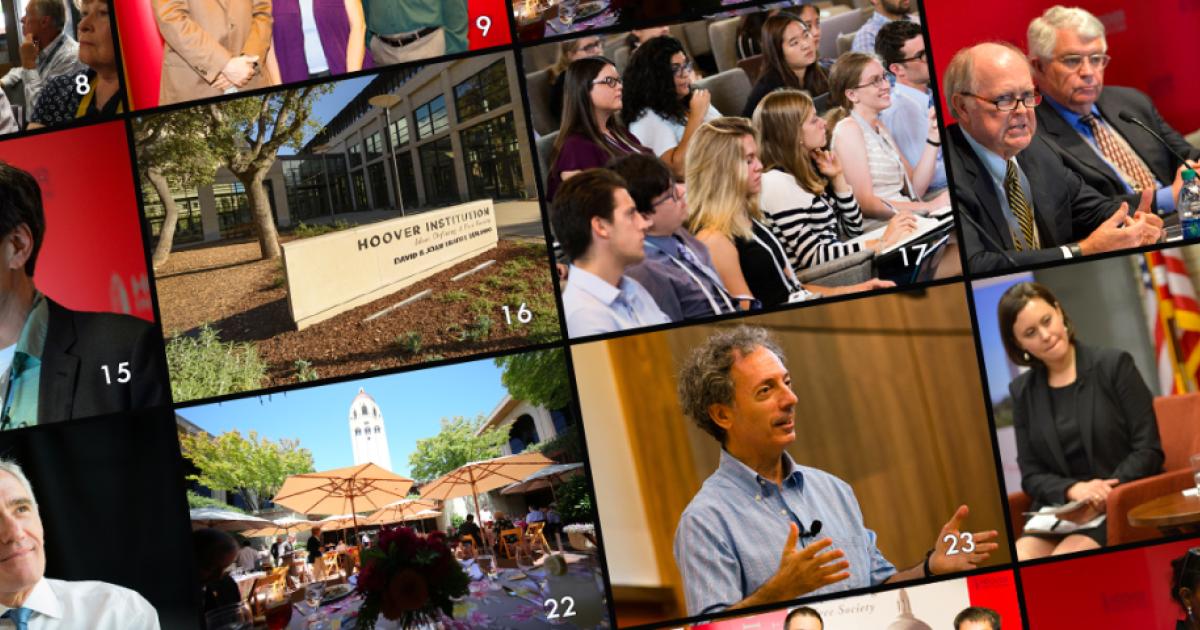 As 2017 comes to a close, we look back at a busy year at the Hoover Institution. There were many noteworthy activities and initiatives at Hoover as the Institution works to advance policy ideas that promote economic opportunity and prosperity, while securing and safeguarding the peace for America and all mankind.

OPENING OF THE NEW DAVID AND JOAN TRAITEL BUILDING

The new 55,000-square-foot David and Joan Traitel Building provides the Hoover Institution a dynamic space for collaboration that is expected to enhance cooperation and efficiency across Hoover’s departments.

This August the Hoover Institution hosted the inaugural Summer Policy Boot Camp, its first-ever multiday, interdisciplinary policy seminar for students and recent graduates. The Boot Camp was a well-timed first event for Hoover’s David and Joan Traitel Building, which was built with expanding student engagement as a top priority. Taught entirely by Hoover fellows, the Boot Camp offered students a toolkit for thinking critically about public policy and evaluating its results.

Peter Berkowitz, a political scientist and the Tad and Diane Taube Senior Fellow at Stanford University’s Hoover Institution, is one of four recipients of the 2017 Bradley Prize. The honor recognizes individuals of extraordinary talent and dedication who have made contributions in areas consistent with the mission of The Lynde and Harry Bradley Foundation. Dr. Berkowitz, a former law professor and professor of government, has published numerous influential articles, essays and books. He holds a B.A. from Swarthmore College, an M.A. from the Hebrew University in Jerusalem, and a J.D. and Ph.D. from Yale University.

Lieutenant General H. R. McMaster, a Hoover Institution visiting fellow and National Security Affairs Fellow for the 2002–3 academic year, has been appointed to serve as national security advisor in the Trump administration. Early in his career, McMaster commanded Eagle Troop, Second Armored Calvary Regiment, in Operation Desert Storm, leading the vastly outnumbered troop in a sweeping defeat of Iraqi Republican Guard forces at the Battle of 73 Easting. McMaster earned a Silver Star for his leadership in that battle, which became an intensively researched case study in successful combat strategy. His leadership of the 3rd Armored Calvary Regiment in Iraq during Operation Restoring Rights produced a major victory in securing the al Qaeda stronghold of Tal Afar and helped prove the effectiveness of robust counterinsurgency tactics. He has held numerous other command assignments, including commander, Combined Joint Inter-Agency Task Force Shafafiyat (Transparency) in Kabul, Afghanistan.

UNPUBLISHED CACHE OF FRIEDMAN LETTERS GIVEN TO HOOVER LIBRARY & ARCHIVES

Hoover Library & Archives has received a never before published cache of letters written between Hoover fellow and Nobel Prize-winning economist Milton Friedman, his wife and collaborator Rose Friedman, and New York publisher William Jovanovich of Harcourt, Brace, and Jovanovich, Inc. Harcourt, Brace, and Jovanovich published Milton Friedman’s 1980 bestseller, Free to Choose, and the early correspondence in the archive deals with fine-tuning that manuscript and lining up the television rights. Following the tremendous success of Free to Choose, Jovanovich and the Friedmans discussed a number of additional books, some of which did not materialize—such as a group of essays by Ruth Friedman; or a short book of policy recommendations: The People’s Commandments: Ten Laws to Pass Now—and one that did: Money Mischief: Episodes in Monetary History. The newly acquired letters can be found in the William Jovanovich correspondence.

The Hoover Institution hosts a panel discussion "Governing in a Time of Technological Change" chaired by George P. Shultz on Thursday, September 28, 2017 at 3:00 pm in the Hauck Auditorium located in the new David & Joan Traitel Building. Following the panel discussion, there will be a question and answer period. This event is dedicated to the memory of the late Sidney Drell, nuclear scientist extraordinaire and legendary senior scholar at Hoover Institution.

John B. Taylor, the George P. Shultz Senior Fellow in Economics at Stanford’s Hoover Institution and the Mary and Robert Raymond Professor of Economics at Stanford, has been chosen to serve on the Eminent Persons Group on Global Financial Governance. The group was recently established by the finance ministers and central bank governors of the G20 countries to address new realities in the global economy that require policy change and reform. The sixteen-member international group of top economists and leaders will be chaired by Tharman Shanmugaratnam, deputy prime minister of Singapore.

Established by Herbert Hoover and codified in the institution’s governing bylaws, the Board of Overseers is an integral source of strategic guidance and support for the Hoover Institution. The board is active throughout the year but assembles in full twice annually in Washington, DC, and at Stanford. Those meetings serve the dual purpose of convening the board for discussions of institution business and providing overseers with behind-the-scenes briefings about national policy activity.

The Hoover Institution Library & Archives is pleased to announce the launch of a new digital collections portal that contains more than 55,000 digitized posters, photographs, documents, sound recordings, and moving images from Hoover collections, with new items frequently added. The portal will allow remote users from around the globe to access the rich collections at Hoover for research and educational purposes. Nearly 44,000 of the items currently available through the portal can be viewed online; items which are protected by copyright are described online but available for viewing in the Hoover Archives reading room.

Finally, Hoover mourned the loss of two fellows this year. While their intellectual contributions to the Institution and society will live on, their presence and continued work will be greatly missed.

Allan Meltzer was a distinguished visiting fellow at the Hoover Institution and the Allan H. Meltzer University Professor of Political Economy at the Tepper School of Business at Carnegie Mellon University.  He was also a visiting professor at Harvard, the University of Chicago, the University of Rochester, the Yugoslav Institute for Economic Research, the Austrian Institute for Advanced Study, the Getulio Vargas Foundation in Rio de Janeiro, and the City University, London.

Kenneth Arrow was the Joan Kenney Professor of Economics and Operations Research emeritus at Stanford University.  Arrow joined the Hoover Institution as a Senior Fellow in 1991 and held both Senior Fellow and Senior Fellow (courtesy) appointments during his engagement.