2022 marked the first full-year return to in-person events held at the Hoover Institution at Stanford University after months of pandemic stay-at-home policies. Here are some highlights. 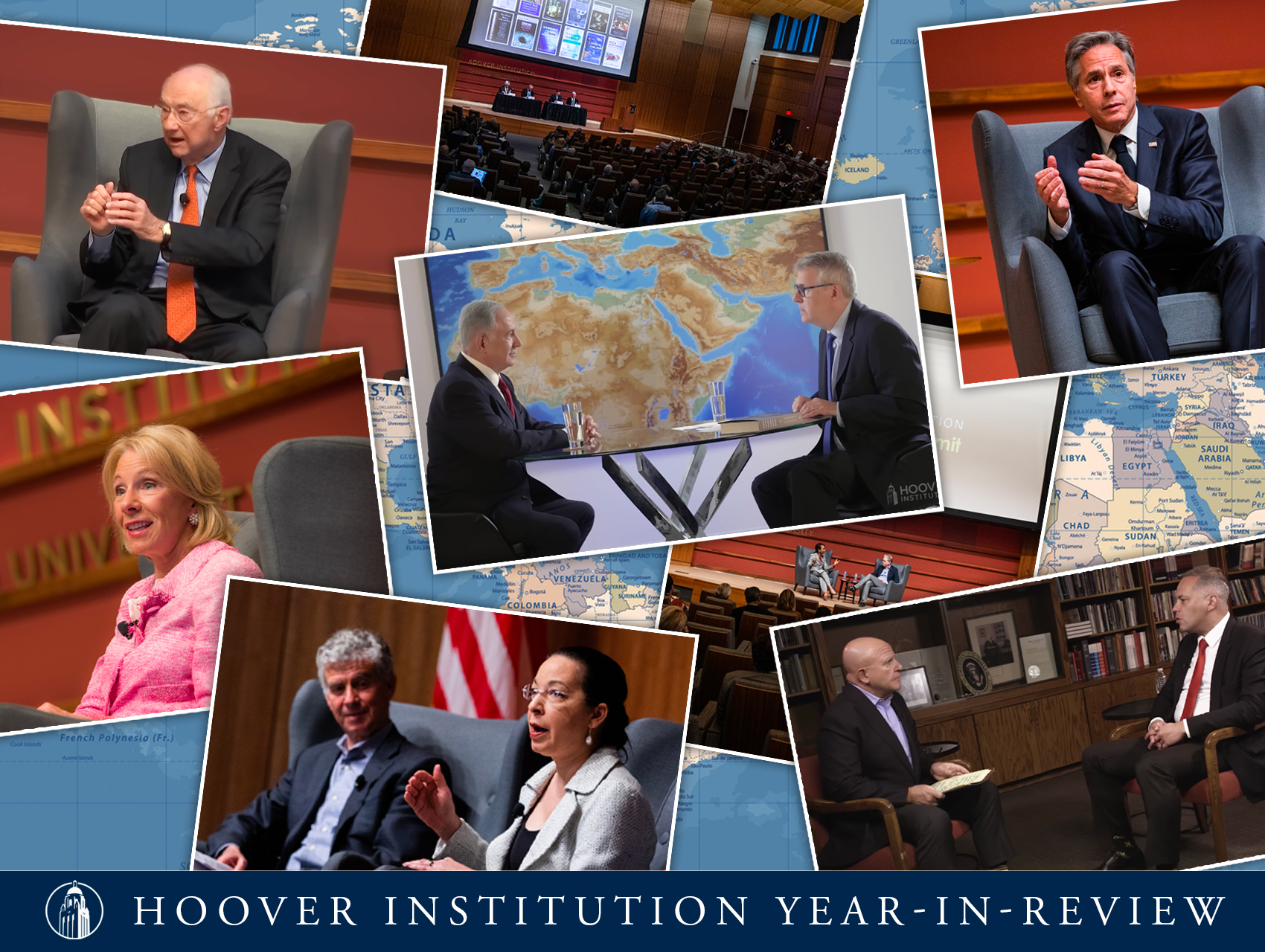 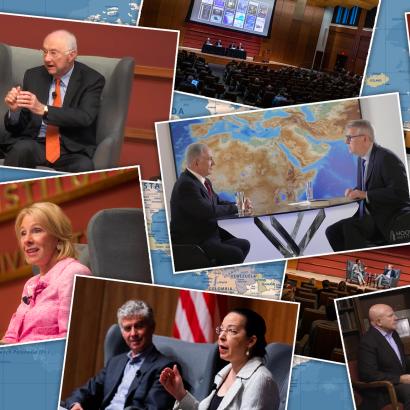 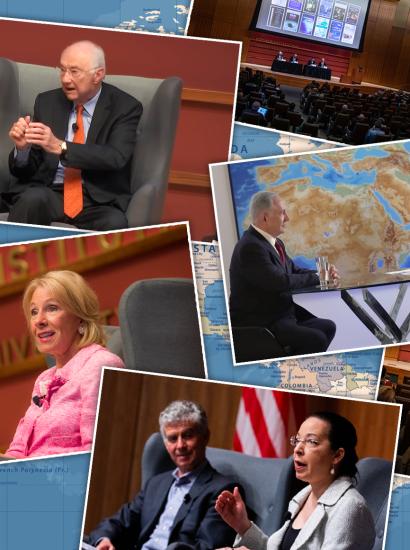 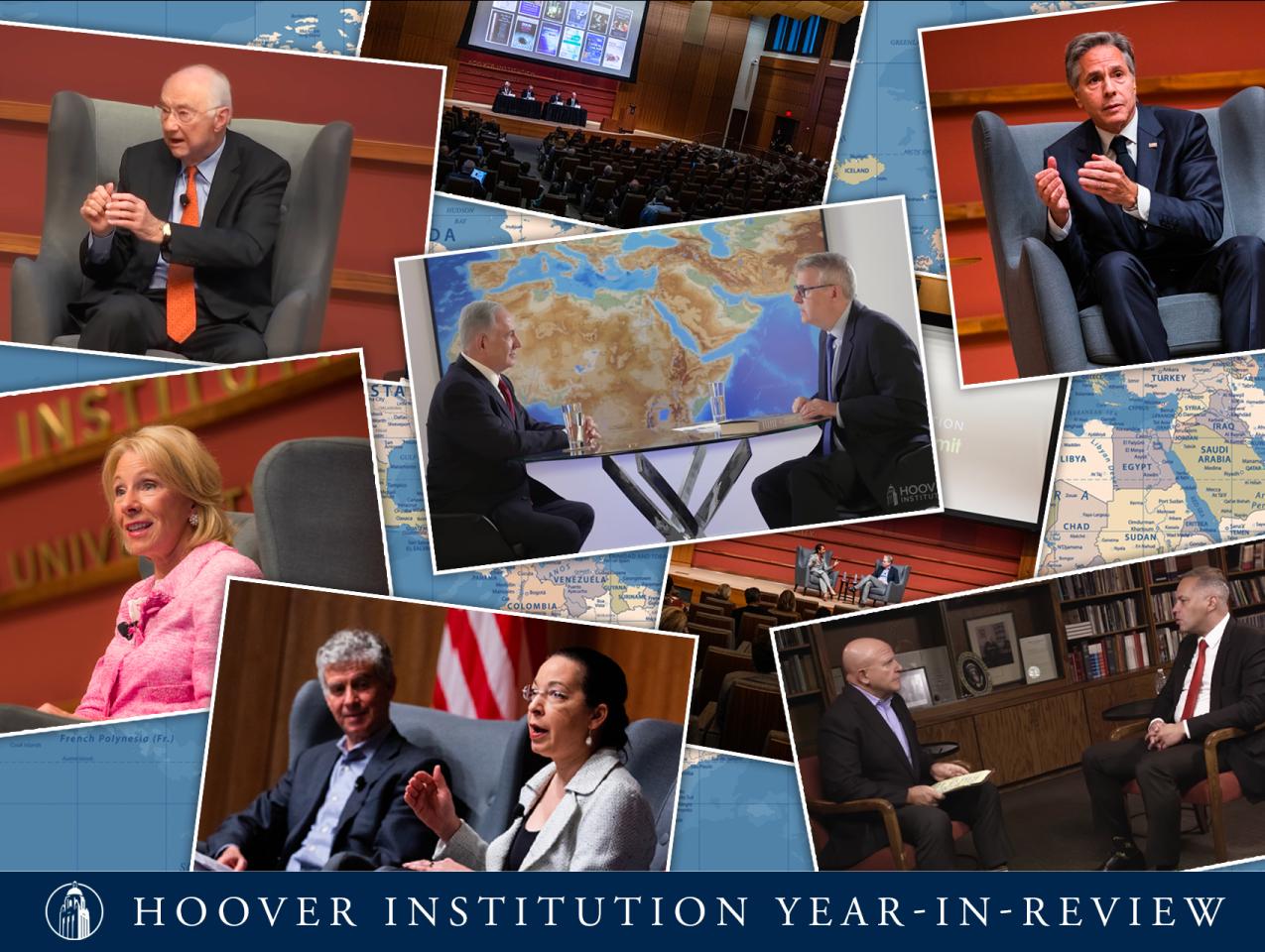 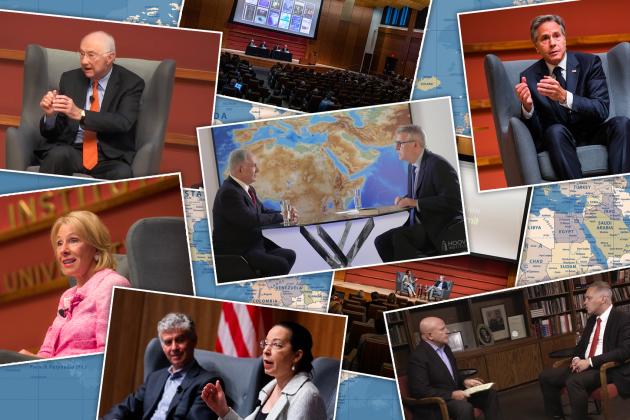 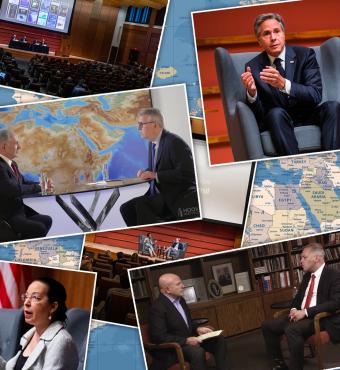 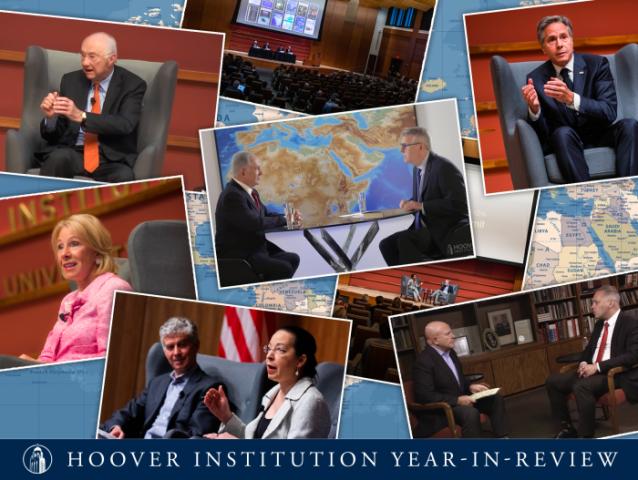 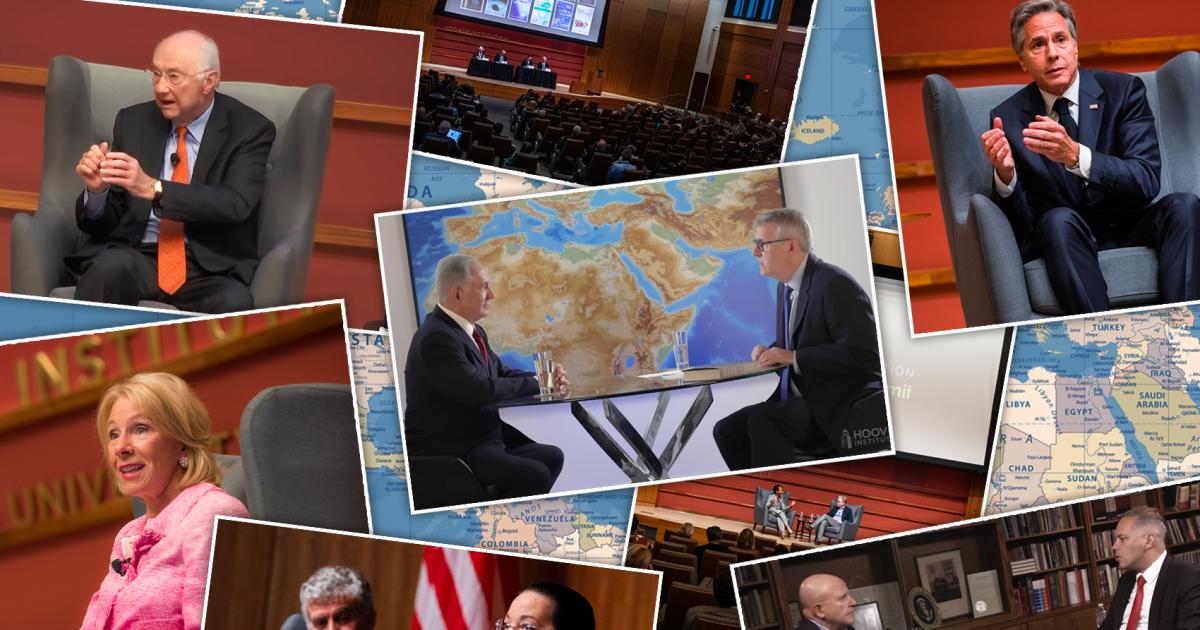 2022 marked the first full-year return to in-person events held at the Hoover Institution at Stanford University after months of pandemic stay-at-home policies. Hoover also continued a robust schedule of virtual seminars and speakers’ series initiated during that period. Below are the most notable events of 2022, organized in categories that correspond with Hoover’s core institutional priorities.

Highlights from the Hoover Institution in 2022 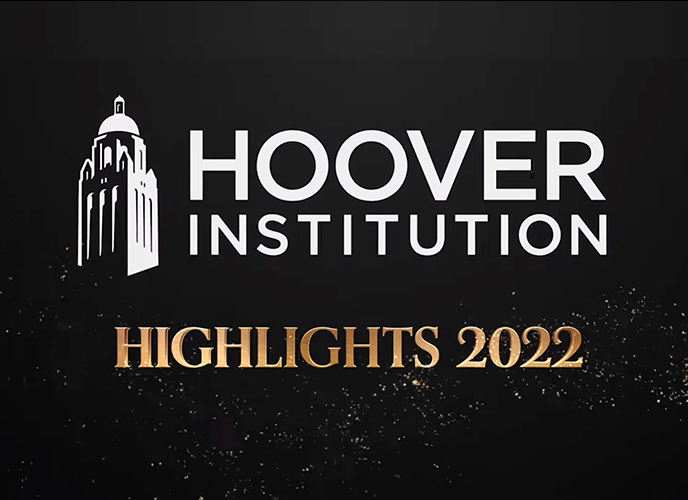 The Hoover Institution gathered economists, central bank officials, and members of the press for a conference on May 6 about how the US Federal Reserve should respond to the growing crisis of inflation in America. The conference was organized by John Taylor, George P. Shultz Senior Fellow in Economics; John Cochrane, Rose-Marie and Jack Anderson Senior Fellow; and Michael Bordo, Ilene and Morton Harris Distinguished Visiting Fellow.

In an installment of the Hoover Book Club series, former US senator Phil Gramm and mathematical economist John F. Early, coauthors of The Myth of American Inequality: How Government Biases Policy Debate, joined John Taylor in Hauck Auditorium for a discussion about their groundbreaking research.

Hoover Institution director Condoleezza Rice interviewed former secretary of education Betsy DeVos about her new book, Prisoners No More: The Fight for Education Freedom and the Future of the American Child.

The Hoover Institution hosted its first education summit on Wednesday, March 9, and Thursday, March 10, featuring discussions with scholars, educators, activists, and other experts about the formulation and advancement of policies aimed at improving outcomes for American K–12 students. The idea for a summit was conceptualized by Condoleezza Rice, and it was organized by Macke Raymond, Hoover distinguished research fellow and founder and director of Stanford’s Center for Research on Education Outcomes (CREDO).

Determining America’s Role in the World

Battlegrounds: International Perspectives on Crucial Challenges to Security and Prosperity

The Hoover-based interviews, based on Fouad and Michelle Ajami Senior Fellow H. R. McMaster’s book Battlegrounds: The Fight to Defend the Free World, promotes “strategic empathy,” a concept coined by the historian and Hoover National Security Visiting Fellow Zachary Shore that considers outside perspectives in the formulation of national security strategy. The series provides a needed forum for leaders from key countries to share their assessments of problem sets and opportunities that have implications for US foreign policy and national security strategy.

NATO secretary general Jens Stoltenberg and H. R. McMaster discussed a broad set of policy concerns. These included Russia’s assault on Ukraine and how the transatlantic alliance has adapted to other twenty-first-century challenges, such as competition from the People’s Republic of China and the impact of climate change on global geopolitics.

Lithuania: On the Frontline of European Security
Wednesday, October 19, 2022

Lithuania prime minister Ingrida Šimonyté explains that the stakes are extremely high in the war in Ukraine. She argues that it is crucial that the Ukrainians defeat Russia decisively, recapture lost territory, and restore their nation’s sovereignty. She maintains that this outcome is not only imperative for the people of Ukraine, but for all who desire freedom and democratic rule in the West.

His Majesty King Abdullah II Ibn Al Hussein of the Hashemite Kingdom of Jordan
Wednesday, May 18, 2022

Jordan’s King Abdullah II stopped by Hoover’s Washington, DC, offices to join H. R. McMaster for an episode of Battlegrounds. During the discussion, King Abdullah underscored how critical it is for the states of the Middle East to do more of the “heavy lifting” in advancing peace and improving the conditions of their own societies.

“Bibi: My Story,” Benjamin Netanyahu on his Life and Times
Thursday, December 8, 2022

Murdoch Distinguished Policy Fellow and Uncommon Knowledge host Peter Robinson travels to Israel to talk with Benjamin Netanyahu, that country’s past and soon to be again prime minister. This interview covers consequential events described in Netanyahu’s new memoir, Bibi: My Story, including his studies in the United States, service in the Israeli Defense Forces, and the death of his brother Yoni during the raid in Entebbe, Uganda, which inspired Bibi to return to Israel and dedicate his life to defending his country.

Before a full crowd of mostly students in the Hoover Institution’s Hauck Auditorium, Secretary of State Antony Blinken engaged in a conversation with his predecessor Condoleezza Rice on a broad spectrum of issues impacting the security and prosperity of the United States and like-minded partners, including aggression by Russia and China against the post–Cold War security architecture, and how the free world can best grapple with challenges resulting from the rapid pace of technological innovation.

The Hoover Institution hosted its inaugural International Seminar on the Stanford University campus, where twenty-five government and private-sector mid-career professionals from like-minded democracies engaged with fellows in conversations on a full spectrum of global policy issues. Led by Fouad and Michelle Ajami Senior Fellow H. R. McMaster and National Security Visiting Fellow Nadia Schadlow, the Hoover Institution International Seminar Program aims to inspire these young leaders from free and open societies to exchange ideas and think creatively about how to overcome shared challenges.

N. Chandrasekaran, chairman of Indian conglomerate Tata Sons, joined Hoover Institution director Condoleezza Rice for a wide-ranging conversation about India’s potential in the next decade as a pivotal actor in advancing global security and prosperity. The event, which took place in Hauck Auditorium, was the second installment of the new speaker series, “Examining the US-India Landscape,” that is part of Hoover’s program on Strengthening US–India Relations, chaired by David Mulford, distinguished visiting fellow and former US ambassador to India. The following day, Hoover and Tata Sons jointly hosted scholars, policy makers, and business professionals for a daylong workshop that explored ways in which the US and India can collaborate on a host of issues.

Confronting and Competing with China

Chips, China, and Taiwan’s Security: A Report from the Field
Thursday, October 20, 2022

A thirteen-member delegation co-led by Annenberg Distinguished Visiting Fellow James O. Ellis, Jr. and William L. Clayton Senior Fellow Larry Diamond reported its insights from a trip to Taiwan in August. The Hoover-led delegation participated in thirty meetings over a five-day period. These included public and private sessions with President Tsai Ing-wen and high-ranking members of her cabinet, as well as engagements with opposition party leaders and business executives from the semiconductor industry.

During a conversation in Hauck Auditorium about his new book, The Avoidable War: The Dangers of a Catastrophic Conflict between the US and Xi Jinping’s China, former Australian prime minister and current Asia Society president Kevin Rudd outlined to Hoover Institution director Condoleezza Rice the basis for President Xi’s ambitions on the world stage and steps that can be taken to diffuse tensions in Sino-American relations.

Digital Currencies: The US, China, and the World at a Crossroads
Friday, March 4, 2022

Hoover fellows and other distinguished experts representing multiple research disciplines described their findings in a newly released report, coedited by senior fellows Darrell Duffie and Elizabeth Economy, Digital Currencies: The US, China, and the World at a Crossroads, before a Stanford community audience in the Hoover Institution’s Hauck Auditorium.

Senior fellows David Brady and Douglas Rivers presented their polling-based research on the issues that would ultimately shape the 2022 midterm elections, including most prominently inflation, abortion, and election results denial.

In a seminar of Hoover’s Working Group on Economic Policy, Michael Shellenberger, author of the best-selling book San Fransicko: Why Progressives Ruin Cities and a recent candidate for governor of California, argued that the greatest factors driving the homelessness crisis in the Golden State are mental illness and substance abuse and addiction. The conversation, chaired by George P. Shultz Senior Fellow in Economics John Taylor and moderated by Senior Fellow Lee Ohanian, also featured remarks by California assemblyman Kevin Kiley, a Republican who represents a district on the outskirts of Sacramento.

Chaired by Milbank Family Senior Fellow Niall Ferguson, the Hoover History Working Group aims to conduct and disseminate historical research on issues of national and international concern; provide concrete recommendations based on research and discussion; and use Hoover's unique position to convene academic experts, policy makers, and interested private sector actors both at Stanford and in Washington, DC.

In a conversation with Niall Ferguson, Hoover Fellow Matthew Lowenstein examined Chinese private paper money from the Qing into the early Republic. In his research, Lowenstein argues that both state and civil institutions were crucial for the integrity of China’s paper notes. The state did not actively support paper notes but nonetheless upheld a legal regime that honored the sanctity of contracts. For their part, business associations acted as gatekeepers, allowing only financially sound firms to issue notes. These privately issued notes thus circulated through the rural marketing system, stitching together neighboring agrarian and commercial economies far better than unwieldy copper coins.

It should come as no surprise that history is at the heart of Russia’s invasion of Ukraine. Russian president Vladmir Putin in July of last year argued as much in his essay, “On the Historical Unity of Russians and Ukrainians.” But few if any Ukrainian or Western historians regard Putin’s argument as anything other than propaganda. In a conversation with Niall Ferguson, Mary Sarotte, Kravis Distinguished Professor, John Hopkins SAIS; and Chris Miller, assistant professor at Tufts University’s Fletcher School, explore the end of the Cold War, NATO expansion, the rise of Vladmir Putin, and the events leading to today’s conflict.

Understanding the Effects of Technology and Economics on Governance

The Hoover Institution’s director, Condoleezza Rice, interviewed Morris Arnold and Nona Jean Cox Senior Fellow Amy Zegart about her new book, Spies, Lies, and Algorithms: The History and Future of American Intelligence. This wide-ranging conversation covered various topics of global espionage, including the impacts of advanced technologies on intelligence gathering and analysis, and the struggle between the interests of the intelligence community and democratic accountability.

Morris Arnold and Nona Jean Cox Senior Fellow Amy Zegart, along with former senior officials from the American intelligence community, led a 48-hour simulation with one hundred participating Stanford undergraduates on formulating policy solutions that address nuclear instability on the Korean Peninsula. The simulation, which took a year to design, forms part of the curriculum of Zegart’s course on the history and future of US intelligence policy, “Spies, Lies, and Algorithms” (also the title of her book from which the course is based). The course, attended mostly by freshmen and sophomores, is intended to introduce students from a diverse set of majors to subjects of US intelligence and national security early in their Stanford careers.

The Hoover Institution hosted the winners of its first Distinguished Undergraduate Essay Competition during a ceremony in the Traitel Building’s welcoming pavilion on the afternoon of Tuesday, October 11. Those recognized were among high-achieving Stanford undergraduate students of various disciplines who were encouraged to submit papers written within the past year that addressed topics related to the integrity of democratic values and institutions and the impact of specific policies on the ideal of individual freedom.